For this month’s Canadian news, I bring you a not-so-healthy dose of ridiculousness served with a side of racism guaranteed to leave a bad taste in your mouth. The item in question is not so much a part of the menu as it’s used to purchase items on it. That’s right, I’m talking ’bout dolla dolla bills, dough, green, moolah, big bucks; or, to exchange my street cred for nerd credibility, I’m specifically referencing Canada’s new plastic, waterproof and apparently fraud-proof banknotes. Last week it was revealed that the Bank of Canada changed the appearance of a female scientist depicted on the $100 banknote after focus groups complained that she looked too Asian. To better represent Canada, she has been replaced by a Caucasian woman the Bank describes as having a “neutral ethnicity.” She may look like a cute, gay nerd; but the message the Bank of Canada is sending is that “neutral” is white and that any other race must be a deviation from the norm. 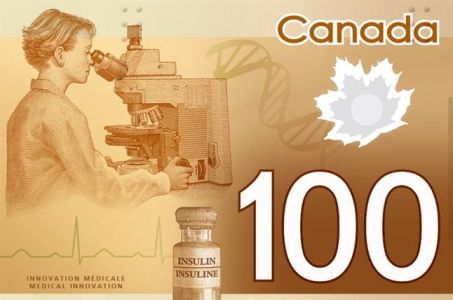 It wouldn’t be the first time that focus groups, used by the Bank of Canada to spot “potential controversies,” have seen unintended imagery on banknotes. In 2011, a Vancouver focus group thought the DNA strand the new $100 bill looked like a sex toy. Another group believed it saw a skull and cross bones in the portholes of a ship on the new $50 note. Multiple focus groups thought that the see-through window of the polymer bill resembled the curves of a naked woman. They also saw Pagan symbols on the face of the Peace Tower clock. 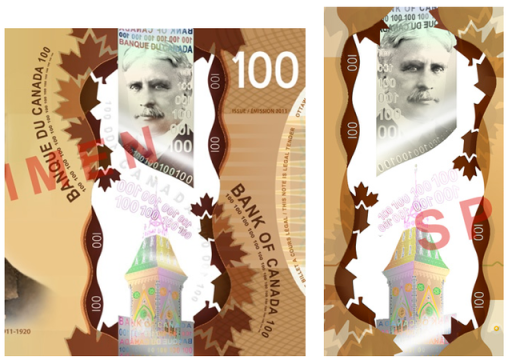 Pagan symbols and a sexy silhouette

When the $100 bill made the news last year, there was no discussion of race or ethnicity. Instead, the focus was on gender. Ms. Magazine congratulated Canada on representing a female scientist on its money. As we’re all too aware, the maths and sciences are still male-dominated fields and the achievements of women in science are often downplayed. A depiction of a woman peering into a microscope was right on the feminist money, so to speak. Positioned next to a vial of insulin, she not only represents the women throughout history who’ve worked behind the scenes of the country’s important scientific breakthroughs, but she also gives national visibility to female scientists.

At a glance, it may seem like women are well represented on Canada’s money. After all, Queen Elizabeth stares at you with a hint of a smile from the back of every coin and twenty dollar bill; but the Queen doesn’t exactly represent your average, every day woman. Little girls can’t hope to become queen when they grow up. They can, however, aspire to be scientists or important feminist activists like the Famous Five who, up until recently, were depicted on our $50 bill. Which is why I was less than impressed when I found out that the picture of the Five on the $50 bill will not make it onto the new polymer version. Instead, the group of feminists who fought for women’s right to vote and be considered “persons” under the law will be replaced by an Arctic research boat, the CCGS Amundsen. The ship is a retrofit of the CCGS Sir John Franklin, a research vessel named after a British colonial explorer for whom I have as much fondness as he had for the French and the Inuit (i.e. not very much.)

In fairness, the reverse side of the twenty-dollar bill does pay homage to the culture of British Columbia’s Aboriginal population and features a great quote from female Quebecois writer Gabrielle Roy: “Could we ever know each other in the slightest without the arts?” The five dollar bill has a winter-y looking scene of gender-neutral children playing hockey on a pond. In the bottom left-hand corner there’s a cute little picture of a kid tobogganing who, it’s got to be said, is at least as “ethnic” as the supposedly Asian scientist. A child tobogganing doesn’t make much of a statement, whereas a woman of colour staring into a microscope next to a vial of insulin does. It recognises the important contributions that women and minorities have made in this country. And maybe that’s what makes this image so threatening; some would rather forget that women of colour are important Canadian citizens who are worthy of recognition.

When describing the original bill, a man in a Fredericton Focus Group said, “The person on it appears to be of Asian descent which doesn’t represent Canada. It is fairly ugly.” A few respondents even said that the yellow-brown colour of the bill “racialized” the banknote.

Others who weren’t as blatantly racist pointed out that other minorities should be represented as well and that the image of the Asian scientist perpetuated stereotypes of Asians as model minorities. Yet replacing the Asian woman for a Caucasian one is only a step backwards. The best way to end stereotyping is with more representation, not less.  Imagine how great it would’ve been if the Bank had taken the request for multiculturalism seriously and had included on the bill a picture of people from various ethnicities engaged in important work or even doing something fun and Canadian like eating maple syrup. But even simply keeping the image of the Asian woman would’ve set a precedent and left room for the possibility of depicting more ethnicities in the future, which in turn would help to fight stereotypes.

From what I’ve read, Asian-Canadians, the very people the focus groups were so terribly afraid of stereotyping, aren’t offended by the Asian scientist. In response to the whitewashing of the scientist, Victor Wong, the national executive director of the Chinese Canadian national council accused the Bank of, ” erasing all of us.” It’s not the first time that Asian-Canadians have been erased. I don’t remember learning about the internment of Japanese Canadians in my elementary school Social Studies classes. The Chinese workers who were paid next to nothing and often died building the Canadian Pacific Railway show another black hole in our history. But as time marches forward, it’s going to get increasingly difficult to ignore Asian-Canadians. Canada, after all, is a multicultural country. It’s estimated that by 2030, 30.6% of the population will be a visible minority. I wonder if the discomfort that stems from seeing an Asian woman on national currency stems from fear that Asians will, to put it in racist terms, take over. But such a concern implies that Canada has always been and should remain white, which simply isn’t true and ignores our colonial history.

Mu-Qing Huang, a Chinese Canadian biology student at the University of Toronto puts it well: “If Canada is truly multicultural and thinks that all cultural groups are equal, then any visible minority should be good enough to represent a country, including (someone with) Asian features.”

Yesterday the Bank of Canada took the unusual step of issuing a public apology for the way it has handled the $100 bill controversy. Mark Carney, the central bank governor, said the bank will be revisiting their decision.

In the development of our $100 bank note, efforts by the bank-note designers to avoid depicting a specific individual resulted in an image that appears to represent only one ethnic group. That was not the bank’s intention and I apologize to those who were offended. The bank’s handling of this issue did not meet the standards Canadians justifiably expect of us. We will be reviewing our design process in light of these events. Our bank notes belong to all Canadians, and the work we do at the bank is for all Canadians.

The apology does not excuse the whitewashing of the scientist. After all, replacing an Asian woman with a white one doesn’t solve the problem of representing “only one ethnic group.” But I’m hoping that “reviewing the design process” and recognizing that “bank notes belong to all Canadians” means that the Bank of Canada will make an effort to ensure that Canada’s bills are truly multicultural and truly show all Canadians including visual minorities.