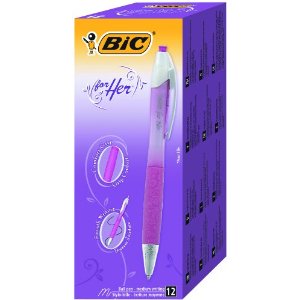 What a funny looking tampon. via Amazon UK

Oh my God you guys, now that Bic makes pens I can use, I can finally write! Which means I can tell you all about the hilarious crowd-sourced comedy happening on Amazon UK. Real people displayed some of the best feminist humor I’ve seen, thus winning the internet for the entire year of 2012. The reviews of Bic for Her pens capture the shock and awe of all the women who have never used a pen before now, the women who are using them as vibrators and tampons because that is the only reason why the name would make even a modicum of sense, and the wonder of men as they transform into delicate little daisies just by touching these cutesy purple pens. I almost couldn’t finish writing you all about it because I couldn’t stop reading these amazing reviews. Apart from them being funnier than all of mainstream sitcoms ever in the world, they also give me faith that humans can spot gendered bullshit in marketing. In a world where people are constantly mansplaining technology, plumbing, photography and writing to us like we don’t already know, it’s nice to see that there are people out there who understand the tropes and stereotypes levied against women well enough to write some funnies without even being asked to. Here are just a few screenshots (and here are a few more), but the treasure is endless. Head on over and watch the side-splitting hilarity parade march all over this crappy gendered marketing. 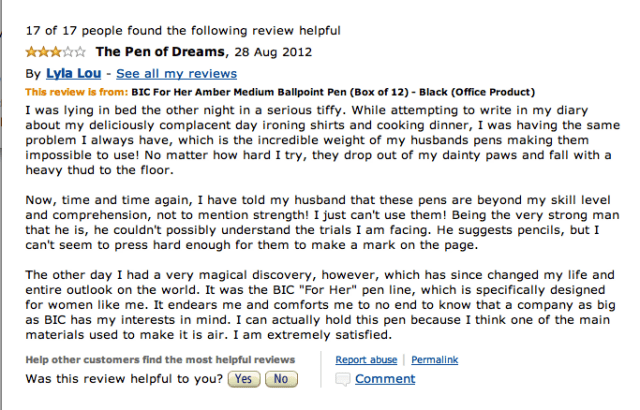