So how bout that E3, huh? Ellie is still kissing girls in the apocalypse in The Last of Us 2. You can be a lesbian in Assassin’s Creed now. Lara Croft seems more murdery than usual, which in my opinion is a good thing. Skyrim will finally get a sequel, if probably not until the next round of consoles. And Norman Reedus for some reason goes on a hiking adventure with backpacks full of babies, I think? Nobody knows what that game is about, and everybody is going to buy it anyway, and who am I if not everybody? I don’t need to know what something is to want it, as long as it is pretty.

What I’m trying to say is that this month I played Detroit: Become Human, which happens to be a nonsense game I knew very little about besides that it is beautiful and features a lot of Jesse Williams’ face, which is also beautiful. I’ll tell you what, this game doesn’t seem to know what it’s about any better than I do. It is a mess. And I am probably going to play it again. 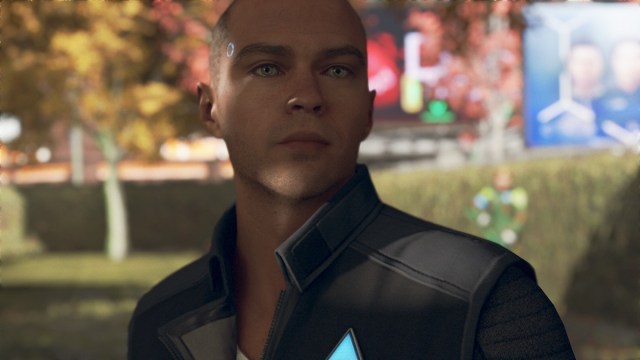 The game takes place in the fantastical setting of Detroit, Michigan, United States of America, where there is no racism, xenophobia, sexism etc. because apparently humanity agreed unanimously to transfer all of their bad feelings to androids. And therein lies the first enormous problem of the game, is that it’s hard to feel super empathetic towards androids when apparently their invention somehow cured all of the bad things we do to fellow human beings? But obviously we are meant to be on the androids’ side, and of course I am because I am not a monster and also I feel what stories tell me to feel even when I know better.

There are three protagonists. Markus, who is played by Jesse Williams, starts out learning to paint but winds up leading what is literally Black Lives Matter, but for androids. Connor is a police android whose entire storyline is “Can cops learn to be human?” And then there is Kara, a maid/nanny android who’s story begins in “Robots took our jobs!” and domestic violence and I don’t actually know where it goes from there because believe it or not I got her killed in pretty much her first scene and was stuck playing as only the (mostly) invincible dude characters for the whole rest of the game. My fault, obviously, but why can the one woman character die at the beginning while the men can’t truly die until the very end of the game? That’s not just a thing that happened, that’s a thing was designed. 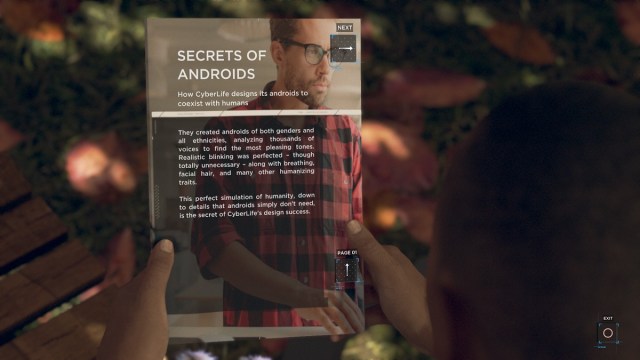 Robot/Artificial Intelligence stories are always a playground for “What if?” situations and questions about humanity and empathy. But by setting this in a very familiar place and surrounding the action with the same breed of awful people that exist right now, there’s no fantasy. It feels like the “Magic Is Drugs” plotline from Buffy season six. It’s so on the nose it misses whatever the point ever was. Why is the maid who is yelled at for stealing peoples’ jobs white? Why are many of the cops who shoot at the Android Lives Matter protesters black? Why is the only policeman who we expect to consider the consequences of his actions not a human at all? This game goes so far out of its way to not tell the stories it is blatantly mining for empathy that it becomes completely meaningless at best and pretty fucking insulting also at best. Add to that a lot of “Well, that escalated quickly” moments, and what you get is a plot that is really best ignored altogether. Not really a great look for a game that is 90% plot.

Another annoyance is the controls. For the most part, Detroit plays like a point and click walking sim adventure a la Life Is Strange or L.A. Noire. But it makes you use every button on the control plus motion controls in ways that sometimes feel clever but more often feel like “Oh, we haven’t made them press that button in a while.” It’s always a tightrope walk in this kind of game, to force enough button pressing to make people feel like they are playing a game without them noticing that you are just making them press buttons to make them feel like they are playing a game. I noticed it here. There were a whole bunch of slow actions that required three entire buttons held down for multiple seconds to complete them but you couldn’t actually fail, so what is the point? And the pointlessness of the controls most of the time made the actual rare quicktime sequences super jarring (and also hard to follow because the icons moved around the screen and everything was hectic but I acknowledge this might just be symptomatic of me being bad at stuff). 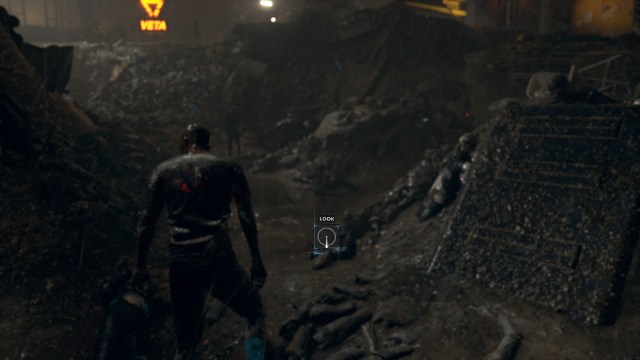 Swipe Down to “Look”!

But anyway. It really is very pretty! The lighting is great. The face capture is excellent. The game is so beautiful that when it is occasionally not that beautiful it’s kind of hilarious. Examples of this include: Clancy Brown’s hair, Clancy Brown’s dog, and the scene in which Jesse Williams’ head for some reason got very pointy for a minute. I think, for instance, that this game features the best pores I have ever seen in a video game. Also, the teeth are much better than usual, except when mouth shadows get a little weird and it looks like Minka Kelly has been chewing on a pen between takes. The dog cracks me right up though. Obviously I fucking loved it and it was my favorite character in the game, but I have no idea where it came from or who decided to put it in this world and most importantly even though it was a monstrosity why was I not allowed to pet it? 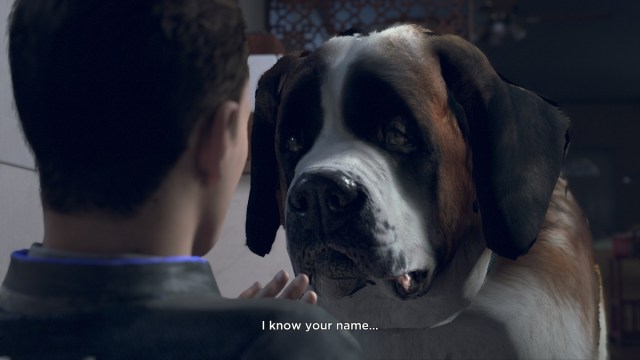 You really have to see this dog in motion to truly understand its majesty.

Besides the visual beauty of the game, my favorite thing was how thoroughly it let me fuck everything up? I screwed up so bad! I already told you I killed one of the main characters at the very beginning of the game. Well, I killed everybody. If a character could die, they are dead in my universe. There was a point where I realized “Wowee, this is not going very well,” and I started leaning into chaos. But mostly it was my fault. Some of it was I just wanted to see what would happen if I did what seemed like an unexpected thing (RIP Kara), sometimes I just screwed up quicktime events. But in the end, I managed to wipe pretty much every android in America out of existence by being very bad at video games. And that’s actually pretty impressive?

So yeah, I think I’ll play it again, only because I fucked it up so bad the first time I wound up missing out on huge chunks of the story. (But the end credits will still show you scenes from pathways you didn’t unlock so you can get spoiled by beating the game for the parts of the game you didn’t get to play, which seems to actively discourage replaying it but clearly not enough to stop me.) 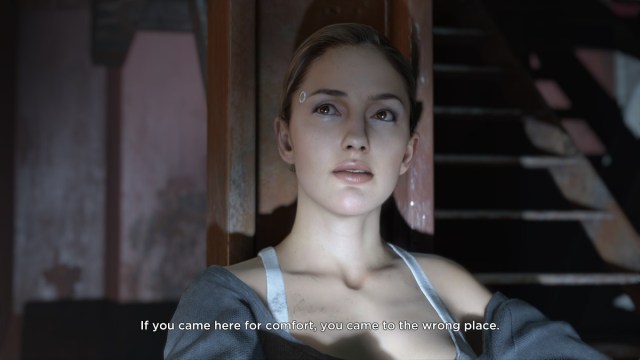 I would have appreciated this warning before I bought the game, Minka Kelly.

Detroit: Become Human is a Ps4 exclusive, and it costs a whopping $60 because it is pretty and features actors whose names and faces you will recognize. For $60 I think they could have done a better job drawing the dog, but what do I know. I liked playing it, and also it was very bad, so your mileage may vary. If you have already played it, please let me know if you accidentally murdered the entire android race like I did or if you salvaged a better world for humans and androids and inexplicably poorly animated dogs. 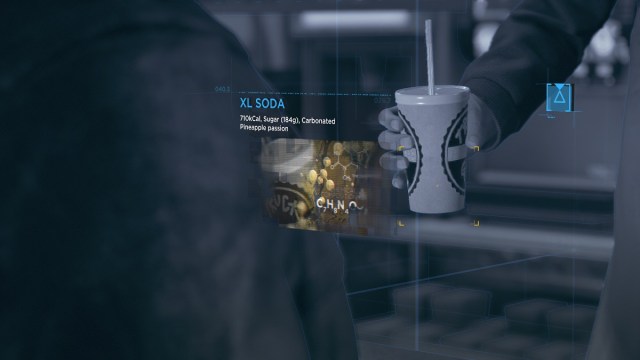 No way this is an XL soda.