I don’t know how to put into words what Butch Glam means for me – why I felt compelled to do it, what I hope it will eventually become. I’m going to try, but it’s going to seem sloppy, rambling, not quite complete. I am not offering this explanation as an anxious excuse or as a heartwrenching marketing ploy; I am offering it because Butch Glam features my face, my name, my words. I’ll be damned if I let anyone define what this publication represents before I do.

The catalyst for this post came from the unlikeliest of sources: the recent livestreamed dialogue between Melissa Harris Perry and bell hooks, filmed at The New School. If you haven’t watched the video yet, I strongly urge you to do so while you still can. I’m going to take you on a bit of a roundabout trip, but hear me out. There’s a point to all this chatter, promise.

“None of us come to black feminism except through you” – Melissa Harris Perry to bell hooks in the opening moments of their talk.

COULD. NOT. AGREE. MORE. bell hooks is the first black feminist I encountered during my formal schooling, the first scholar who validated my theories on traditional methods of social and literary critique being implicitly predisposed to suit white concerns. Without her (and Miss Lou (known outside the Caribbean as Louise Bennett), and Zora Neale Hurston, and Toni Morrison, and Maya Angelou, and… nothing comes to fruition in a vacuum), I wouldn’t have formed the analysis necessary to critique unthinking forms of black “solidarity” or attempts at “post-“black movements.

Without them, I wouldn’t have been able to come to the comforting conclusion (as bleak as it may seem, it really is comforting) that when I sit in academic or “literary” spaces and feel those silent forms of self-erasure luring me to speak a certain way (the ongoing commodification of systemically binarized matrices which uphold the false dichotomy of blah blah blah) or to only valorize a certain subsection of published works (oh man, I’m so glad we’re reading Ian McEwan this week. So much more interesting than The Odyssey!), I am not crazy; I am simply black, and queer, and butch, and transcultural, and therefore alone.

But knowing that I’m alone comes with its (albeit nihilistic) perks: feeling like I don’t have a community or audience that’s at all inclined to welcome what I have to say, feeling like I can count my cultural and literary predecessors on my hands and toes while my lighter-skinned or straight counterparts can name enough predecessors to fill small libraries, results in me endlessly running my mouth and not giving a flying fuck.

Let me be clear, before anyone feels the need to make me the unwilling object of their condescending pity: I am not ashamed of being alone. Too often the prevailing narratives characterize loneliness as a defect, a hindrance, a reason to feel lesser than. For me, it’s been quite the opposite: realizing that I’m alone has been my most freeing epiphany to date.

It’s what gave me the impetus to start my personal blog: I regularly encounter situations where I see certain parts of my identities reflected, but not the whole summation. For instance, since moving to Vancouver, I have found spaces where I can see my queerness reflected – and can even find a few pockets where I’m affirmed as a queer immigrant – but often find that my transculturalism causes confusion or self-defensive spurning for fear of losing social capital. Instead of harbouring those enraging moments, I blog about them and work them into my fiction. What have I got to lose? I’m already alone.

It’s because I’m alone that I’ve yearned to do something like the poster zine Butch Glam, and jumped at the opportunity to combine my authorial intent with Karen’s visual mastery. I’m so damn tired of seeing light-skinned butches be publicly lauded as the stand-in for the butch experience – as if all gendered presentations of a certain bent can fit within a single representation. Feminisms, not feminism; butch experiences, not the butch experience. There are so many nuances within those differences, so many structural and philosophical arguments to be made; it seemed logical to start with the basic premise.

What do you see? Wait, let me rephrase: apart from The Village Voice crowning Rachel Maddow* as being The Butch, what do you see (if you didn’t see it before, you see it now. You’re welcome)? Two publications, with two people laying claim to the term “butch”, who look nothing alike. Therewithin rests the most frustrating aspect of popular conceptions of butch: we’ve been told that we must all look, and dress, and act in line with those like Maddow, that we must all partake in the same romantic and sexual desires (*cough butch/femme binary). Maddow herself said that she does not move about the world consciously endeavouring to tell other queers how to be – but regardless, she is a product of (and currently gaining fame on) the very systems she oh-so-flippantly tries to subvert. 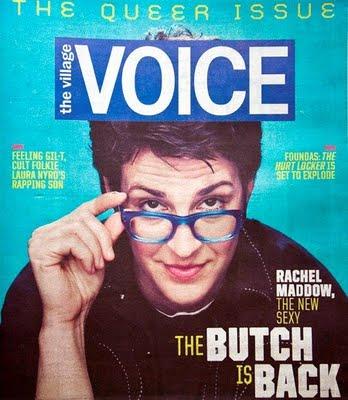 “Are we still pushing against a certain characterization of the black female voice?” bell hooks asks. Yes. Butch Glam is part of an attempt to broaden what “black” in relation to “female” can mean.

Also, let me preempt any who may crown me for “bringing sugar to the sisterhood”: Butch Glam is not sentimental (fast-forward to 0:30 in the MHP/hooks video to know what I’m referring to). I did not enter this project with the intent of numbing racially marginalized butches by spoonfeeding them a melodrama that’ll pull their heartstrings into subservience. Butch Glam opens with a manifesto; I’m secretly hoping another person who’s black and butch will read it, and completely disagree – then put forth their own understanding of black butch femalehood. And onwards and onwards until a few decades from now, another crop of black butches of various cultural, national and economic backgrounds can turn to posterzines or books or the interwebz and maybe feel just a little less alone.

Will it work? Who the fuck knows! Will Butch Glam become subsumed much like Maddow’s public persona? Completely possible! Am I drunk on the racial naivete that come from being a cis, able-bodied person born to university educated parents? That requires more processing that I’ve currently got the mental mileage to spare! But what have I got to lose for trying?

Oh, and bell hooks’ point about using a pseudonym that’s in lowercase so as to refocus the attention usually spent on Author As Person onto the substance of her writing? I am also guilty of undertaking such a social experiment and similarly failing (don’t look at me; just listen to me). Public interest in my personal blog doubled after I posted the cover photo for Butch Glam, once I brought my full name and face into the public eye. Other people are going to try to define me anyway, as hooks observes. I might as well beat them to it.

I used to publish all my internet activity under the byline “by c.c.” That practice stops now. I am Christina Cooke, as the author field on this post makes clear. I might as well get comfy with owning up to the reality of my own, lonesome name.

*Btw, I heart Rachel Maddow like whoa. Yeah, that’s right: I can love her and still critique her. Did I just blow your mind? You’re welcome.

Christina Cooke is a fiction writer, occasional blogger, and unicorn wrangler based on the Unceded Coast Salish Territories of Western Canada (Vancouver, B.C.). Her fiction has appeared in various open access and print mediums – like Butch Glam! To learn more about her work, check her out on Twitter: @cjctlc.

Christina has written 1 article for us.