Previously on Mass Effect: Dr. Chakwas saved the world by taking immaculate care of Commander Shepard and her crew of misfits while they fought robots and outlaws and something called Collectors for what I can only assume were very good reasons. Nobody died, if you ask me, and everything was happy and great. We banged a lot of aliens, but we were always true in our hearts to Dr. Chakwas. All of us except Jenna, who criminally underrated Dr. Chakwas’ contribution to the fight by not wanting to bang her enough.

Six hundred years later, we are back in the Mass Effect universe, but in a whole new galaxy, with a whole new sexy doctor we are not allowed to bang, and this time it’s even more hurtful because she’s voiced by Natalie Dormer. Mass Effect: Andromeda is a tough game to write about because it’s nearly impossible to judge it on its own merits. The original Mass Effect games, particularly the second one, are some of the best games ever made. I came into it with an open mind and a lot of positive thinking, and I came out thinking it’s a Pretty Good Game that I wanted really badly to be great.

There is a plot. It’s kind of bad. Basically a whole mess of humans and aliens, calling themselves The Initiative, decided to colonize a new galaxy for no reason at all, and then wound up in the middle of a civil war between the natives. And there are angry robots again. Also, the ecosystems are failing on every planet and the only way to stop that from happening is to do actual sudoku puzzles. I’m not gonna lie. I had a really hard time caring about any of it. The Initiative seems like a giant corporate cult and I can’t imagine this many people willingly signing up for a 600-year space journey just for fun. And I like the “good” aliens and I’m happy to help them out, but, like, we shouldn’t even be there. And they should be able to figure out sudoku on their own if they’ve managed to master space flight. 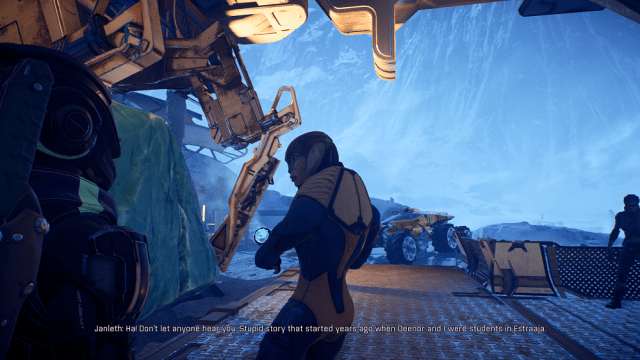 This is only funny because the alien had an Australian accent.

We take the role of Ryder, who is a far cry from Commander Shepard. She’s young and untried, great at sudoku but bad at flirting. She’s awkward and not entirely ready for command. She never quite carries that mantle of authority we got used to with Shepard, but when she earns the respect of her crew it feels genuine and nice. I like her. She’s a good hot nerd. 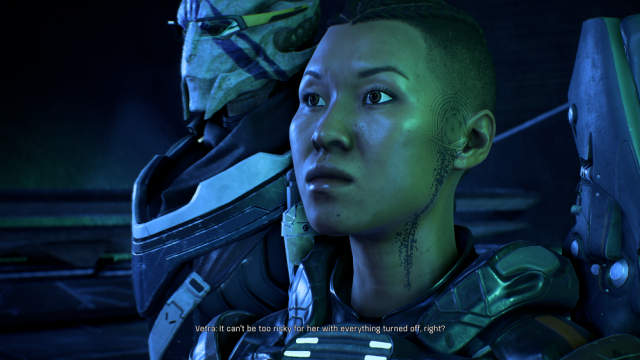 We all chose the same haircut i bet, huh?

And I love the characters. Almost all of them. Everybody except Liam, who I almost liked occasionally but then he would always annoy me again. Drack is a sweet (for a Krogan) grandpa. Peebee is an annoying genius and we banged in zero gravity. Cora is too earnest and it makes me uncomfortable but she means well and she likes gardening. Jaal is loveable even for a boy and I saw his butt and his bony alien boobs. Suvi is human and I think navigates the ship? She has a good accent, but the lighting on the bridge is weird so I don’t really feel like I know what she looks like. She licks rocks as a hobby.

And Vetra is a Turian smuggler with a heart of gold and we’re in love I guess though to be honest our romance was kind of abrupt so I’m not sure how I feel about our future? And in our “I love you” scene Ryder didn’t have any facial animations so she seemed kind of afraid of the commitment and/or banging a 7-foot tall alien. I do like Vetra the best for sure, but I wish she had a little more content, and I don’t even mean the fact that there’s no sex scene in her romance arc even though obviously I am disappointed that I didn’t get to see her spiky bird bod. It just felt like there were fewer scenes with her in general. I might go back and romance Peebee just to see what I missed, which hopefully was blue tits. 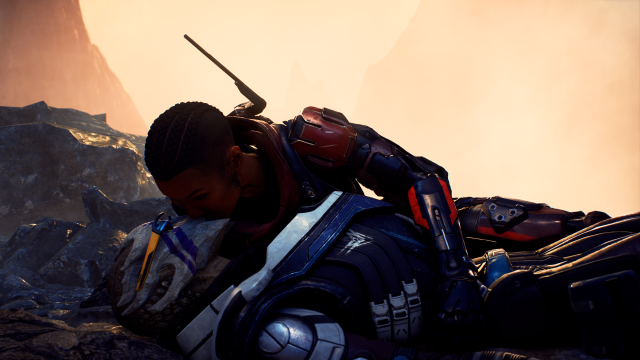 While the characters are definitely this game’s strong point, they did fail for players who want to play as gay men. The only options for dude-on-dude romance are two human guys who look like they were built in the Mass Effect 3 character creator. Make Jaal bisexual is all I’m saying. Everybody should be able to bang an alien if they’ve traveled six hundred years for the privilege. 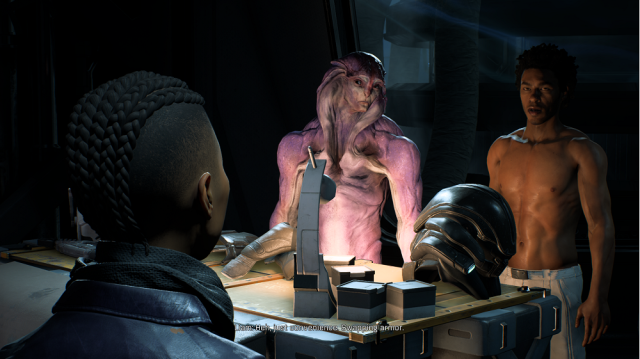 Boys can’t bang these boys. What is even the point of technology?

I was really rooting for these guys even if I didn’t especially care about their mission. And the actual mission parts of the game were pretty fun. When you have a clear objective and the combat reverts to classic Mass Effect corridor style fighting instead of the open world of the rest of the game, it feels more like itself. But there is a lot of open world. And a lot of it is toxic/irradiated/cold etc. until you do enough sudoku to clean up the environment, so it’s not even really explore-able. There’s not really much to find out there anyway, except for the single most enjoyable fight in the game against a giant flying robot squid. (It took me 12 minutes to kill, which I know because I recorded it and have watched it back a couple times because it was exhilarating.)

But with a few notable robot squid exceptions, the combat just isn’t much fun. Again, Andromeda is suffering by comparison because I just played Horizon Zero Dawn which had the most engaging combat I’ve played in years. And I’ve also been playing a lot of The Division which has no plot to speak of but absolutely perfect shoot-and-cover gunplay. Guns throughout most of Andromeda feel so underpowered that it’s hardly worth using them. (Things improved when I got a Naladen sniper rifle that explodes everything in two hits. Get one of those as soon as possible.) The real damage, and the fun, comes from chaining combos of your special powers. But even this is less viable than it should be, because you can no longer command your squadmates to use their powers, so you’re left to combo off yourself like some kind of nerd who didn’t complete a romance arc.

It’s very easy to get bogged down in fetch quests and lose the thread of the plot. Every planet plays a lot like the Hinterlands in Dragon Age: Inquisition, but even bigger and emptier. The urge to 100% everything is hard to ignore, but you should really ignore it. My advice for getting the most enjoyable experience would be to do the bare minimum on each major planet to get it settled, and pursue plot missions and companion quests whenever they are available. Do side quests only when they’re convenient or seem fun. Otherwise you might find yourself having played for eight straight hours without actually accomplishing anything for the third day in a row and it might make you bitter when really there is nobody to blame but yourself. And the game. You can blame the game a little. There are just too many quests, man.

See, it sounds like I hated it, but I did not hate it! I’m just aggressively in the mood to have liked it more than I did. 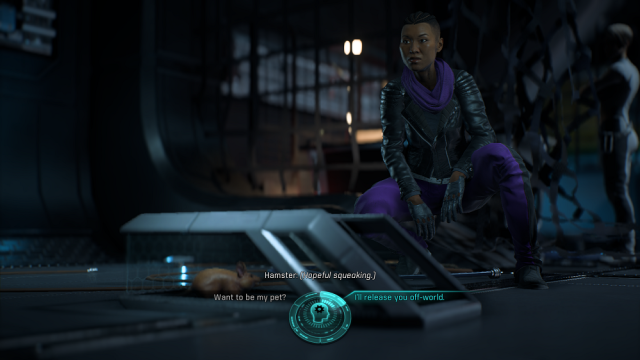 There are a lot of threads left to tell more stories, and there will definitely be added DLC because this is Bioware and there’s always DLC. The game needs more plot to fill up the massive world they built, so hopefully they’ll add more story-based content and not another giant map to drive around in. I’m really bad at driving. I somehow managed to flip the Nomad, which is supposed to be unflippable. (Actually one of the most affecting voice-acting moments in the game was Peebee wailing “No, no!” when I accidentally drove us all into an abyss. I felt really bad about it.) So, less driving. Fewer maps, even. If they blow up a few planets I wouldn’t be mad at them. Just give me a mission at a place, where I do not have to fly to another place and another place. And give me cut-scenes where I can fall further in love with everybody but especially Vetra. Let me bang Dr. Lexi T’Perro and also Dr. Chakwas even though she is a galaxy away. Just put some more Mass Effect in this Mass Effect and I think we’ll all be okay.