It’s no secret that we here at Autostraddle love our webcomics. Especially when they’re written by queer women and feature queer characters. Decrypting Rita: An Exchange of Secrets with Oblivious Transfer is the first printed volume of a webcomic by author, illustrator and trans* woman Margaret Trauth. While it spans several dimensions and includes characters such as robots, dragons and magic-users, Trauth tells a story that still manages to focus on the characters.

Despite several exotic settings, it’s fundamentally about the kinds of people I know: queer, occasionally-poly nerds.

This first book of Decrypting Rita tells the story of a lady robot, not surprisingly named Rita, who finds herself pulled out of her own dimension by a mysterious force and into several parallel ones filled with different version of her and her friends. It’s filled with action, well-built science fiction worlds, strange fantasy settings and interesting and funny characters trying to get along with each other and figure out what they want to do with their lives. As the book opens we see an exciting action scene where the robot Rita is breaking into a building and dodging her enemies, on a mission to assassinate. When she’s captured, that scene quickly jumps into a normal slice-of-life comic where a human version of Rita wakes from a dream where she was that robot version of herself, breaking into a building and trying to assassinate an evil version of her real-life boyfriend. Human Rita can’t shake the feeling that this dream was something more than just a dream. The dimensions continue to cross over, as later on we visit another dimension filled with a dragon version of Rita, elves and “cut-rate warcraft versions” of her friends. When dragon-Rita is being attacked, robot-Rita jumps into this dimension and scares off the enemies, before being pulled back into her own world. While they all have basically the same characters, each dimension is vastly different and even exists in an entirely different genre. 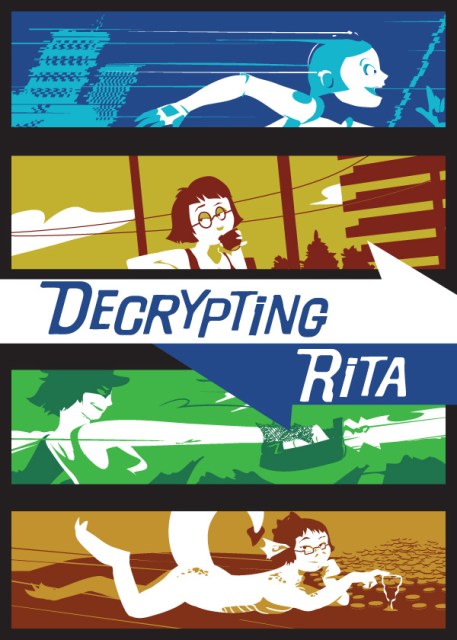 In each dimension, the characters’ relationships with each other change vastly. While Rita and Barrett are enemies in the robot dimension, Barrett is Rita’s boyfriend in the human universe. Similarly, human Rita’s friend Kim is dead in her universe, but works for Barrett in the robot universe and is Rita’s lover in the fantasy universe. When the universes start to overlap, these differences in relationship dynamics start to create a lot of confusion for the characters. They see their girlfriends attacking them, their boyfriends as the head of a nefarious corporation and their dead friends as still alive. All of this dimension-hopping might seem confusing, but when you have the book in your hands and you can look back and forth through the story, it makes for a very interesting and unique read.

Perhaps the most striking thing about Decrypting Rita is it’s abounding creativity. First of all, Trauth uses a very unique story-telling style where she takes the idea of having multiple parallel universes with corresponding characters and transposes that into the art style. Trauth takes full advantage of the sequential art that comes with it being a comic book and sets up not just parallel stories, but also parallel panels stacked on top of each other. As a reader you can read the panels across the two page spread and see how the each character acts in the different dimensions and how similar or dissimilar their lives are. This also creates some very fun moments where the stories will be overlapping or characters will take similar actions, and you can see how even before the characters jump between dimensions, the dimensions were still intertwined. 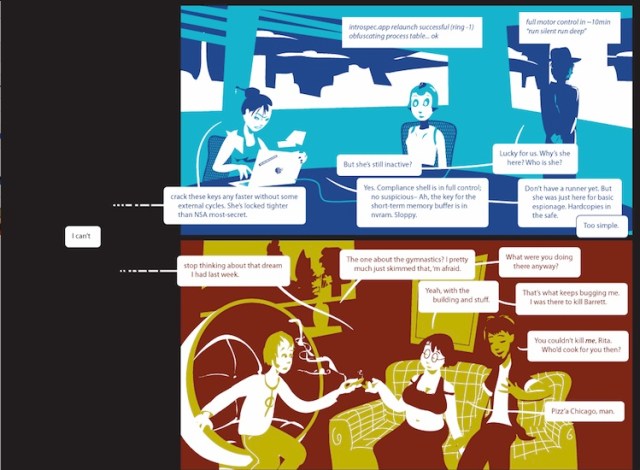 The second place you notice the creativity jumping out at you is in the art. Each different dimension uses only a very limited color palette and is extremely stylized. One universe uses different shades of blues offset by white to create a sleek and clean future, another uses oranges and browns to show a rustic fantasy setting. A third uses reds and yellows to create a universe that is distinctly different from the science fiction universe which it is most often paired up with. Additionally, the simple, stylized art allows for incredibly dynamic action scenes that seem like they’re flowing from page to page. Trauth has mastered the ability to show her characters moving and running and dodging in a single panel with very simple shapes and colors.

This comic has an overall sense of fun and adventure. It has something for you if you like science fiction, if you like fantasy, if you like queer storylines, if you like philosophy and inter-dimensional travel, and even if you’re just a fan of digital art. And unlike many things that try to fill so many holes, Decrypting Rita is able to tell a fulfilling story in each of the areas it treads. This is the first volume of Margaret Trauth’s comic, which is also being updated as a webcomic. You can buy a physical copy of her book or download the Kindle addition. She’ll be starting a kickstarter campaign for the second volume soon.