After the success of FAT SEX WEEK and GAY SEX WEEK it only made sense to round out the trifecta with FEMME SEX WEEK. Check out the tag to see all of the entries in this topic and check back soon for more amazing Femme sex talk!

This weekend I was in front of the camera for a lifestyle shoot for the New York Toy Collective (more on their products and a behind the scenes video from the shoot later on in FEMME SEX WEEK). One of my favorite parts of a photo shoot is the chance to hang out with folks I don’t see much and meet new people with an immediate ice breaker–working together on a photo shoot.

While I was getting my make-up done somehow the topic turned to people getting picked up on the street, namely how one of the other models had been picked up on the street and on the train, in the same day, by two different femmes. One of which they ended up sleeping with. I was so impressed! It feels like an urban legend, a hot Femme just rolling up on a cute queer and making their desire known in an intentional way–AND WINNING. (Where winning, here, is both of them getting laid.) 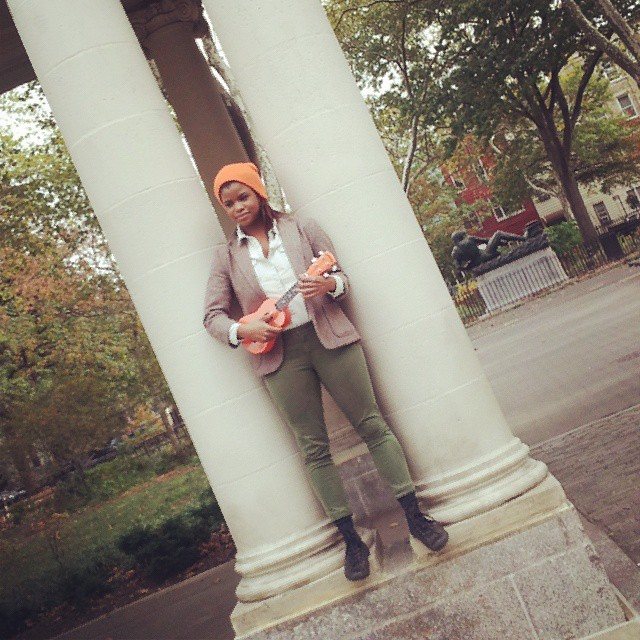 Erica, pictured here, is singing a song about sex toys on that ukelele.

I’ve noticed over the last year or so that I have had an increase in my own queer visibility on the street. I tend to tweet about it whenever it happens because I’m usually alone and it’s so remarkable to be a Femme presenting person getting a dyke head nod or a wink on the street from a queer presenting person. It rules! It’s like that inner 20 year old in me who wore nothing but baggy Old Navy men’s clothing to appear more “andro” because I thought that’s what would get me attention from other queers is finally getting what she always wanted. To be seen.

I’m also an intrepid queer explorer so as soon as this visibility started happening to me I went into self-examination mode to determine what I was doing differently.

My dyke head nods, winks and smiles happen usually when I’m alone and lots of places I don’t expect. Especially at the intersection of Brooklyn Avenue and Atlantic Avenue, when I’m wearing no make-up and some kind of “running around”outfit, I feel like I see all kinds of masculine of center queers who give me the nod.

I delight in the queer acknowledgement and then sit back and examine what I was wearing, doing, or “coding”to be queer. I’m feeling my most authentically queer when I’m really performing my gender, and that is in a huge, over the top kind of way that I mostly only do at certain parties. (See: every Rebel Cupcake, Swoon and Hey Queen.) 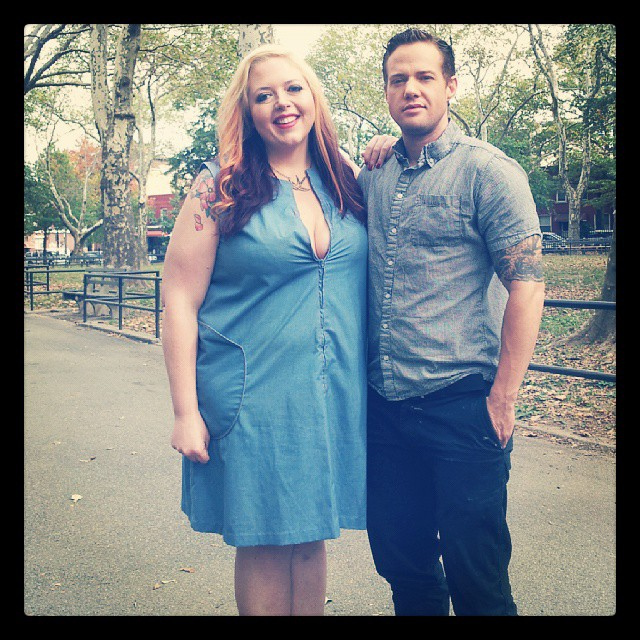 Me and Tuck during the photo shoot.

Then I think about my hair. Is it because I have weird, loud hair (that’s about as loud and weird as I can get away with and still be a practicing attorney)? And I see other hot Femme presenting people out in the world with loud hair but it doesn’t necessarily code them as queer.

But what I have figured out is that it’s not so much how I present it’s what I do. And it’s that I finally learned how to casually flirt with people with an eyebrow raise or a smile or a wink, which is what is eliciting this response of “I see you and I wink back.”

I spent a decade trying to figure out how to flirt and express desire. Being called “too much”or “coming on too strong” many times, I kind of put the kibash on it. And before I was “too much” I would let my fear of rejection stop me from asking people out, flirting or being at all forward with people. Up until a couple of years ago, I had no idea how to be in the middle ground. And, as in all things, expressions of desire are a balancing act.

What I’ve done is finally, finally absorbed my own advice of “Nobody ever died of awkward,” and what Rachael was always trying to teach me about flirting. “It’s never a bad time to make someone feel good.” 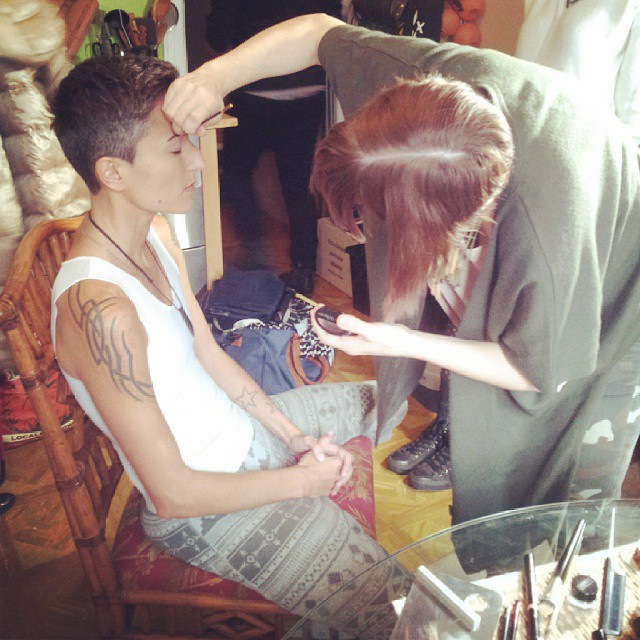 Flirting with someone on the street is not a big deal. And I’m not talking about catcalling, harassing or yelling at someone. I’m talking about a little eye contact and a smile to say, “I see you queer and I think you’re hot.” This often goes unnoticed by the person, but sometimes it doesn’t. And I get that head nod or acknowledgement. It’s kind of like that awesome Butch/Femme “dance” dynamic that people talk about, only here it’s queer on queer and it’s just about really seeing and appreciating each other.

So as I relaxed into the understanding that expressing desire didn’t mean I was proposing marriage, that I’ve done the work on my self-esteem to know that my self-esteem doesn’t rely on other people, I have nothing to lose in thst circumstance. It’s now become a kind of reflex, I see a hot queer on the street and I do the head nod or the smile that let’s them know that I see them. And sometimes they see me seeing them!

Maybe I’ll work up to the kind of impressive work that the Femme used to pick up that hot model on the train (they are really hot, by the way). But in the meantime I’m appreciating the ways in which I’ve eroded my own feelings of Femme invisibility in this tiny way and I’m maybe brightening the day of some anonymous hot queer on the street by non-verbally acknowledging their hotness.

If my site has ever helped you get a date, learn how to love yourself more or feel at home in your body, would you consider donating? My fund drive has some really amazing prizes and I’m working to fund my art so that I can finish my memoir and keep putting the kind of energy into this blog that I love to do. For $100 you can get a laptop dance from Drae Campbell. (This prize is too hot for Go Fund Me, so donate the $100 through paypal to queerfatfemme at gmail).

Bevin Branlandingham is living the life she’s always dreamed of as a queer artist, lawyer, body liberation activist and plus size party girl in Brooklyn, NY. She blogs about the relentless pursuit of her joy at QueerFatFemme.com.

Bevin blogs about the relentless pursuit of her joy at QueerFatFemme.com.

Bevin has written 7 articles for us.