Meanwhile, Tavaroff is still hulking about when he sees Batwing and asks “What are you?” to which Luke replies, “Justice.” And WHEW, chile, the CHILLS upon watching Luke get to take down that overgrown haircut! *chef’s kiss*

Alice and Black Mask are arguing over who’s a better villain and spoiler alert: the answer is Joker because Alice whips out his acid flower and sprays it at Roman, cementing the black mask to his face.

And the In the Heights references just keep writing themselves, because Sophie is acting as the Benny to Ryan’s Nina (just go with it) as she walks her through the best route to take to get to Sionis mansion, where Circe is presumably headed. As Ryan and Circe maneuver through the streets, they use their vehicles’ weapons against each other until they reach a bridge that I’m fairly certain is THE bridge. Ryan’s confidence must have been bolstered by seeing the makeshift Batsignals because she tells Circe to call her Batwoman. Alice arrives and attempts to spray Circe with the Snakebite, but the two struggle and fall over the bridge in a gorgeous parallel to the event that began their estrangement. 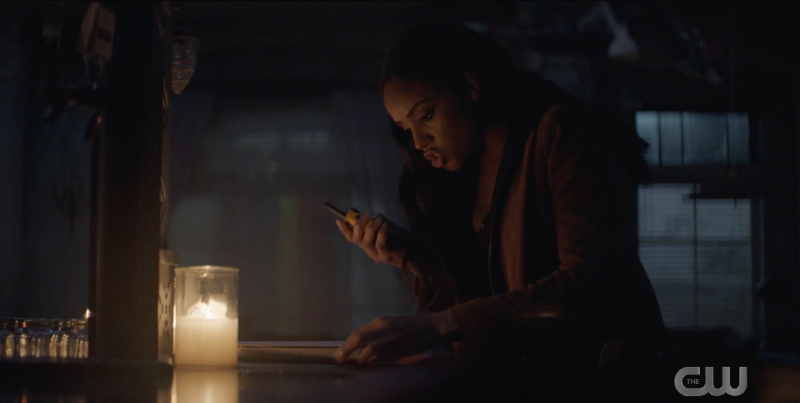 “Check one, two, three. This is Sophie on the Dispatch, yo.”

The sisters sink, and Alice imagines she’s back in the subway car with Ocean (Alice hallucinating Ocean while under water is not lost on me) before Tatiana kills him. She tries to warn him and he tells her that he’s busy planning a future for them; one far away from Gotham where they can start over. She realizes that Safiyah made sure Alice would have to choose between her sister and her love, and she decides to choose her sister. She gets to say her goodbye to Ocean, who asks her to promise that she will chase this feeling that she now knows she’s capable of.

The Snakebite hits Circe a bit differently, and she is instead back at the house where her sister was kept. But this time she turns around, opens the door, and finds Beth. Back in the present, Alice wakes up and pulls her sister to safety. 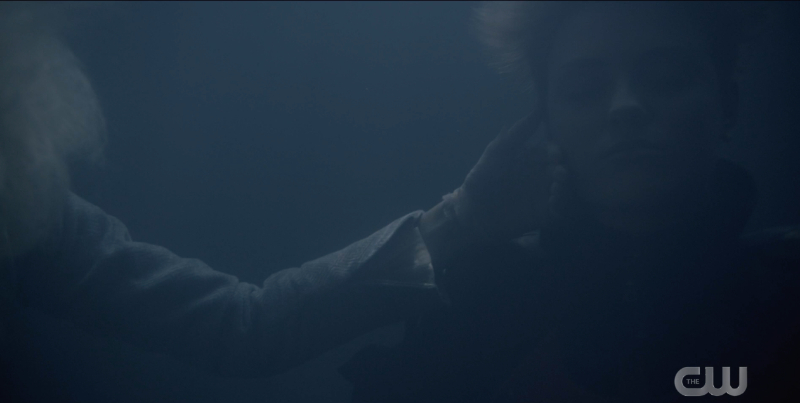 On shore, Ryan starts CPR on Circe and Alice looks back and helplessly pleads with Ryan to tell her what to do; how to help. They work together until Circe starts to breathe again, but it’s not Circe who speaks this time. It’s Kate, and she remembers Beth, her sister. Alice barely has time to process this before cops find them, recognize her, and drag her away. I don’t have a lot more to say about this scene other than Rachel. Fucking. Skarsten. 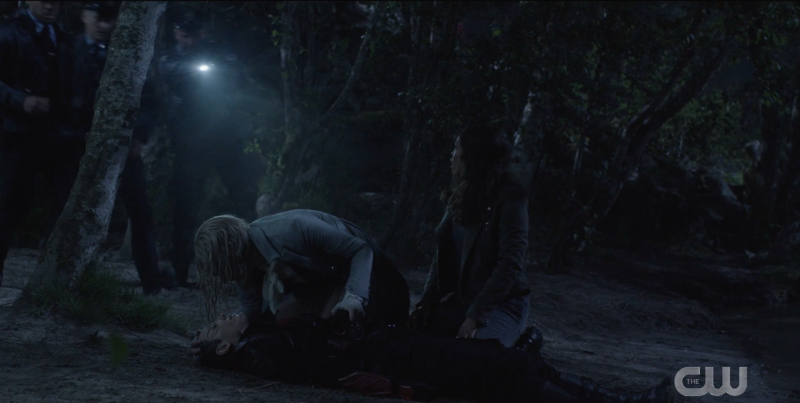 This was BRUTAL to watch.

The lights are back on in Gotham and Vesper is back on the air doing dumb shit like calling Batwoman “B-woman” and doing that thing white women do when they call Black women “sister.” Like, just stop it. She pleads with Batwoman to rethink hanging up the cowl and informs us that Alice and Sionis are headed to Arkham.

I could barely type those sentences without getting misty-eyed again. I rewatched episode 201 while writing this, and specifically watched Ryan’s conversations with Luke and Mary throughout the episode. From the moment Ryan put on the Batsuit she knew what it meant. She may not have thought she was worthy at the time, but she knew how important the symbol across her chest was and thought maybe that symbol could help make a difference for people like her. In 201, Ryan notes that Kate was a hero both in and out of the suit, and she couldn’t see how she would ever live up to that; because she saw herself as the number the system told her she was. But she’s more than that and now she knows it and is standing proudly in it. The board votes unanimously to end her parole early. 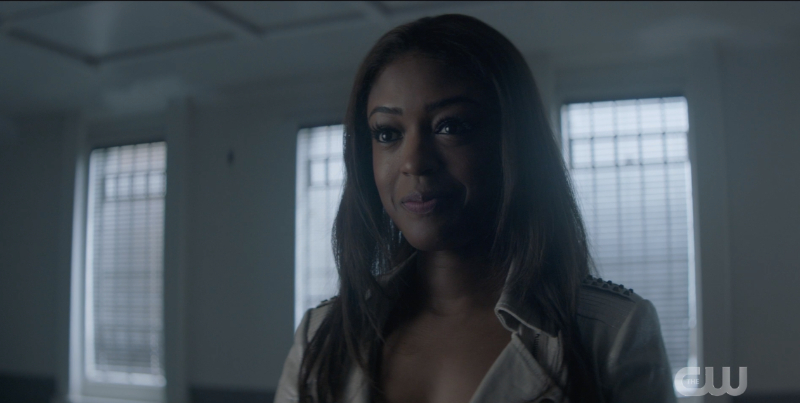 Back at Wayne Tower, Mary reads Kate my recap from the game show episode. Just kidding, but she does give her the play-by-play including Luke’s nerd flirting and wow is it nice to see them laughing and joking again. Luke tells them about his dad’s work on Batwing and they cryptically mention Kate’s Future Plans. Unfortunately, they don’t involve Alice for the moment. Even though Alice helped to bring Kate out of Circe, unless Alice wants to bring Beth out, Kate doesn’t think she can help her. 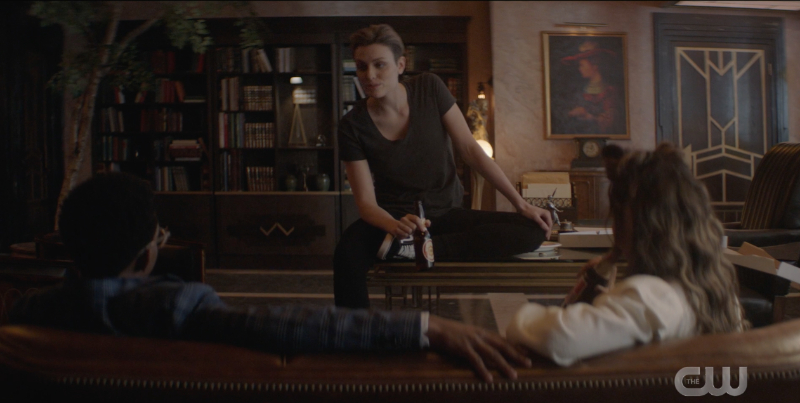 Ryan shows up and Kate quips about the two of them having the same taste WHICH IS OBVIOUSLY ABOUT BEING ATTRACTED TO SOPHIE AND DEFINITELY NOT ABOUT VEGAN PIZZA OR BEING BATWOMAN. Ahem. The Batwomen take the room, they joke about the Batmobile, and Ryan finally gets to thank Kate for the symbol and for subsequently changing her life. Ryan’s face is so genuine and grateful and sure, maybe I teared up again. And then, Ryan gets the approval that she’s always wanted; Kate tells her that Batwoman belongs to Ryan.

Ryan is the one who knows what the symbol means to the people who have no hope left. I keep thinking about how dope it is for this white Jewish woman to step back from the mantle she created, and hand it off to a Black woman because, in this moment, that’s who the city needs. Kate Kane was Batwoman and Ryan Wilder is Batwoman. Ryan earned this and she deserves it. Point. Blank. Period. And as if we needed further proof, Ryan promises Kate that she will take care of Luke and Mary because they’re her family now. 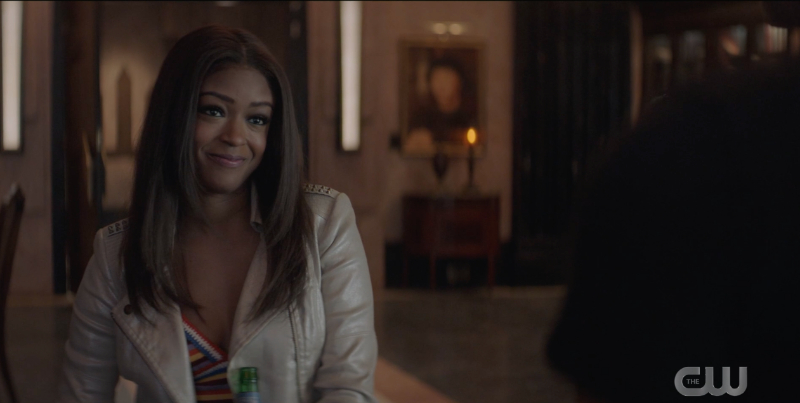 Kate enters The Hold Up with a swagger they should teach in Queer 101. She’s there to tell Sophie that she’s leaving Gotham to see her dad, A FRIEND IN NATIONAL CITY, and then to look for Bruce. Batmoore has been through a lot: Don’t Ask Don’t Tell, a husband, a secret identity, a new face; but the timing just hasn’t been right. Kate tells Sophie that they both deserve something a little easier. If Sophie agrees, she isn’t going out without a bang, and she tells Kate that whoever that person is, they better be able to compete with her. AND THEN THEY SHARE THE MOST PERFECT KISS AND DON’T YOU WORRY ABOUT HOW MANY TIMES I’VE WATCHED IT LEAVE ME ALONE. Ahem.

But really, I’m going to miss this version of Kate Kane, and hopefully we’ll get to see her again somehow in the back half of Supergirl or season three of this show. My poor starved shipper heart does hope that this opens the door for a nice Wildmoore slow burn next season, though. (Daphne, Natalie, Maya… if you’re reading this… PRETTY PLEASE!!!) 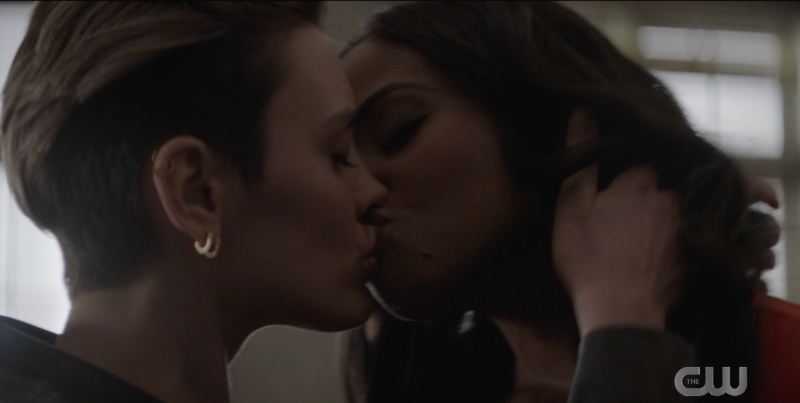 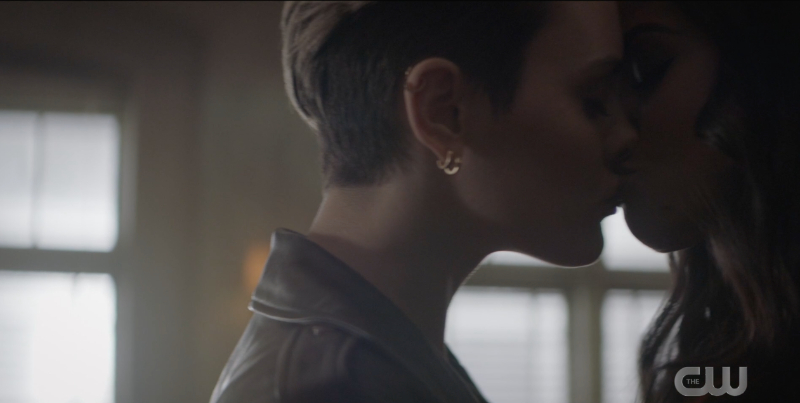 Down in the Batcave, the team decides that their next plan of action is to find the villain paraphernalia from Batman’s trophy case. Ryan asks Mary to be the point person for the new community center above the medical clinic and Mary agrees. Before they get started, Ryan heads off to tie up some loose ends.

Ends that land her at Arkham Asylum where Sionis is yelling about “Janus!” over and over (surely that’s fine) and his cell neighbor Alice is looking better in a jumpsuit than anyone has the right to. All Ryan wanted was for the system to work just one time and she finally feels like she got justice for her mom. Ah but see it turns out, the mom Ry Ry thought was dead didn’t actually die in childbirth. LE TWEEST! 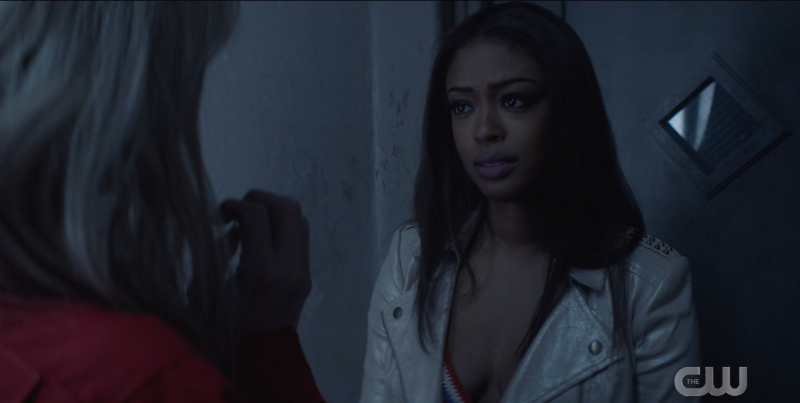 On the shores of Gotham Harbor (I don’t know, I think I made that up), a hat and Penguin umbrella drift by, but the real item of note (to this recapper, anyway) is the magic ivy growing incredibly quickly so you can catch me screaming about Poison Ivy from now until season three, K BYE!!!

In all seriousness, I started this recap thanking some folks, and I’m going to end it the same way. To all of you who read these or share them on social or comment below, thank you so much. It still blows my mind that you’re here and I appreciate each and every one of you. Until next season on the same Batchannel, Nic out.