Last night’s midterm election results were weird. Not because the pendulum of Congressional control swung back to the Republican Party; the tick-tock cycle of midterm power shifts been the standard in the United States for decades. Not because Senator Mitch McConnell refused to answer the phone when President Obama called to congratulate him on his landslide reelection victory. Not even because Karl Rove went on national television dressed like a fucking cowboy. 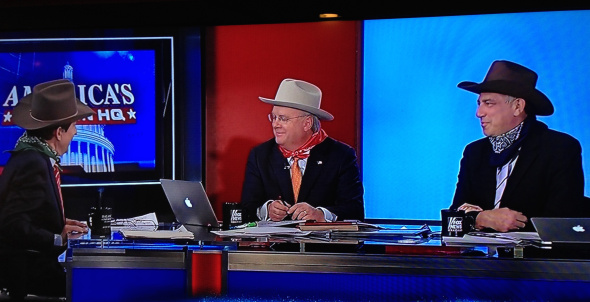 A real thing that happened

No, last night’s midterm election results were weird because Americans voted to legalize marijuana, to have better access to abortions, to implement a higher minimum wage… and to operate under a new set of GOP overlords.

Republicans now control the House and the Senate

House Republicans won at least nine seats last night, which means they’ll take up 245 spots in the 114th Congress, compared to the the Democrats’ 174-ish. (Some votes are still being counted and some run-offs will be necessary.) According to the New York Times, that’s the largest Republican majority in the House of Representatives since Truman was president. The GOP also snagged seven Senate seats, giving them their first majority since the good ol’ Bush administration.

What does that mean for the waning days Obama’s presidency? It depends on who you ask, obviously.

Democratic midterm losses during the Obama presidency now rival those of both Richard M. Nixon in 1974 and Bill Clinton in 1994 as the most destructive to his party’s political standing in Congress in the post-World War II era.

BuzzFeed thinks it’s no big deal, to be honest:

The flip of the Senate will be remembered for one thing: It will be the first time in history that a major party took control of both chambers of Congress and absolutely nothing changed.

Vox thinks a whole lot more of nothing is going to get accomplished:

We’ll have a Republican caucus that is more conservative than it is now, and a Democratic caucus that is more liberal than it is now, [because] you’re subtracting moderates from the Democratic caucus, and adding very conservative Republicans to the GOP caucus. If one of the problems voters had with Washington was that nothing got done, it’s not going to get better after this election.

And New York Magazine‘s Daily Intelligencer thinks everyone should just calm down:

For the last two decades, neither party has held control of the Senate for more than eight years. For all the rhetoric you’ll hear in the coming days from Republicans that this is a mandate, it isn’t. Republicans still have a real challenge putting together a winning coalition in presidential campaign years. Democrats still have a hard time putting one together in the midterms. None of that appears to have changed on Tuesday night.

The GOP won lots of gubernatorial seats too

Wisconsin reelected Scott Walker. Florida reelected Rick Scott. Michigan reelected Rick Snyder. But those victories were mostly expected. My girlfriend is a native Wisconsinite and last night she said she thinks Scott Walker could punch a baby in the face and still win votes. The surprise GOP governor victories came in liberal bastions like Maryland, Illinois, and Massachusetts. And then there were states that were on the purple fence but learning Democratic — states like Iowa — that ultimately tilted Republican in their gubernatorial elections.

Maine also failed to elect Mike Michaud, who would have been the first openly gay person to be elected as governor. (New Jersey mayor Jim McGreevey came out in 2004, but he did so in his resignation speech.)

These victories are actually a more alarming than the Congressional ones, because it’s governors and state legislatures that do the most damage with conservative social policies these days. Abortion, immigration, LGBT rights, gun control: Watch as more red states than ever try to legislate these issues with medieval morality.

All eyes are now on the 2016 presidential election. When and how is Hillary Clinton going to announce her candidacy? Is Elizabeth Warren going to step up to the plate to challenge her?

Are Republican candidates going to do that dumbass thing again where they run wildly toward the Tea Party spewing anti-gay, anti-woman, anti-logic bullshit only to try to turn around in midstream when the general election arrives and the majority of voters force them to act like it’s 2016 and not 1600? Or are they going to get their shit together and acknowledge they can’t win national elections with their homophobic rhetoric and legislation? Marriage equality seems like a done deal at this point as it barrels its way to the legal system, but will all these Republican lawmakers allow anti-equality legislation to reach the floor of their assemblies?

If history is any indication, we’re only a few months away from the start of the next presidential election. Gird your loins, dial in Rachel Maddow, and get ready to get busy with grassroots campaigns.

Edit: Based on projections at the time of posting, the original version of this article stated that Democratic candidate John Hickenlooper lost Colorado’s gubernatorial race, but the election has since been called in his favor. Yay!