Peach is a very sleek hybrid between a messaging app and a social network — and it’s brand new, released at the beginning of January, by Vine founder Dom Hofmann. It is, indeed, yet another messaging app — but y’all know me. I’m far from minimalist when it comes to my technology (a funny thing to say as I write this week’s Queer Your Tech longhand in my dinosaur-covered decomposition notebook). The point is, I love trying new things and telling you about them, though I don’t always love the new things I try. In this case, however, I’m all about it. Like ALL about it. And if I analyze why I’m totally in love with Peach, it’s because it introduces a cool mechanic to the social mobile app scene, but also because of the sort of mood I’m in right now.

Upon launching Peach, you’ll be prompted to set up a username and password and such. Its onboarding process is easy and smooth. It’ll prompt you to sync your phone contacts to find your friends, and I discovered the people I knew already using it were the nerdiest of nerd crew — all early adapters when it comes to new tech toys. Unlike Twitter, you can’t just follow someone, by the way. They have to add you back for you to see their posts (this is a plus for me — I feel more at ease sharing things that way).

When you’re finished, the app takes you through a short tutorial — here’s how to write, here’s how to take a photo, blah blah blah. What they don’t really tell you about in that tutorial is the sheer amount of magic words you can employ — type “gif,” for instance, and you can search for and post gifs from within the app. Searching “coffee,” as I’ve just done, yields Bill Murray drinking straight from a coffee pot. Type “draw” and unlock the capability to draw with your finger and post the doodle. “Rate,” and you’ll get a star system, one to five, that lets you apply a rating to anything you set your mind to. Try pairing that with the “book,” “music,” “tv” or “game” magic words. “Song” even behaves like Shazam: your phone listens to what you’re listening to and posts the title and artist. This is so clean! No bloating the interface buttons, which is a design triumph on a small screen. It also touches both my inner computer nerd and secret society lover (even though all the words are public on this list right here, I still went through and tried to figure them all out myself before looking at that page). 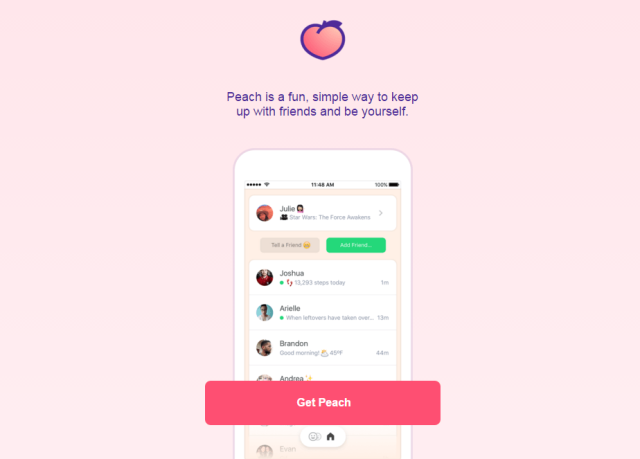 The camera capabilities are pretty magic too (though I will warn you, the focus and exposure are basic and not pretty). The infinity symbol in the bottom left corner functions like Instagram’s Boomerang. The four-square grid lets you shoot four photos with a three-second timer (photo-booth-style selfies, anyone?).

The cool interface means Peach isn’t just another Facebook clone — though it does have a delightful take on Facebook’s antiquated-but-fun “poke” feature. You can wave at people, boop them on the nose, even cake someone, among many other things. I caked my poor friend Julie four times in a row even though she was sitting right next to me. That’s when we discovered that Peach sends a push notification for those — your cake will appear in a banner across the top of your friend’s phone.

Peach has come ’round after most people know what is and does, which allows us all to be really intentional about who we share with. Yes, Peach is essentially a messaging app that’s entirely public to those on your friends list, but Peach posts aren’t searchable on the Google machine. My friends lists on Peach, I’ve decided, is and will be made up of only friends I trust implicitly with both my location and shitty photos of my cats. That way when I’m writing in a coffee shop somewhere, I can type “here” and ask if any of my (currently four) friends would like to join me.

Now the question I see in a lot of other coverage of Peach: will it last? This is the part of my review that has less to do with Peach and more with how I’m feeling at the moment: what the fuck does “last” mean? I don’t bloody care if it “lasts.” I’m reading a book right now called Exploding the Phone: The Untold Story of the Teenagers and Outlaws Who Hacked Ma Bell by Phil Lapsley. It’s all about phone phreaks who whistled up free long distance calls with their Captain Crunch cereal prize toy whistles. It worked because automatic switching inside the vast network of telephones was entirely sonic; many people who figured out how to do this became friends as a result, even if they lived far away from each other and had never met in real life. Many of them had no one to call otherwise, no one to use their (illegal) talents on, until the found each other.

That sort of moment reminds me of the apps with a small or uncertain user base. And I know that sounds crazy. I’ll try to explain myself. The phone system no longer works the same, and the phreak community no longer exists as it once did (hacker communities are the modern equivalent). It lasted for longer than any app has lasted so far, sure. But I think the proliferation of different messaging and social networking apps come from the same desire — the deep human need to reach out and talk to each other, to share, to find your special group of people and build a clubhouse for them. That’s why I think we’re, on the whole, so willing to try all these new, fun things, even if their purposes seem redundant; even if it requires time and energy to do so. Humans are social explorers, I think. And just because these club houses aren’t permanent—just because tomorrow we’ll find a different outlet with which to express our need to connect—doesn’t invalidate them in the moments they do exist. Hell, our collective fascination with Snapchat should indicate that. I’m having fun with Peach right now; I don’t care if my four friends stop using tomorrow or next week. Its uncertain nature doesn’t mean I’m not going to highly recommend it to you right now. I suggest giving Peach a go, and instead of worrying about investing effort into a platform that might die as quickly as it popularized (a valid emotion that I normally feel about new apps) Consider exploring these fresh new features that feel like all the best parts of Twitter, Slack and Telegram.

Right now, Peach is free, but it’s only on iOS. There’s an unofficial port that brings it to the web and Android called Nectarine, but without the magic words that are, arguably, the coolest part about Peach. There are comments on the port that suggest Peach is working on developing an official Android app — I emailed them to check and they haven’t got back to me yet.

So, who’s trying Peach? If you’re not, where are your current internet club houses? As always, tell me everything forever.