A couple of days ago I stepped off the train and a middle-aged man walked right into me. I think he was middle-aged, but to be honest, I’m not sure. I only had time to see a hint of greying hair and what looked like a frown before he had pushed right past me and onto the train. There was no apology, no eye contact, no acknowledgement of what had just happened. In fact, if I hadn’t been holding a hot coffee cup that had been pushed against my chest when he walked into me, I might not have even realized what had happened. Instead, I quickly checked my dress to make sure it was coffee-free (it was) before continuing, quite unfazed, on my morning commute. This was completely out of character for me. Usually when someone bumps into me I automatically say “sorry!” like a walking, talking Canadian stereotype – apologizing for something that isn’t even my fault. But the more time I spend in New York, the less I do things like say sorry and the less I care if I bump into someone or someone bumps into me. There’s just no time for sorrys and cares! 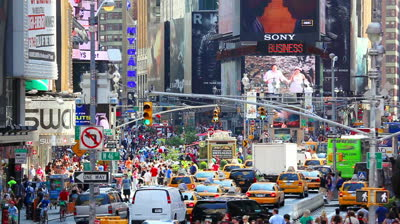 In New York, you don’t wait for the light to change before you cross the street. It would be rude to stand still at the curb and wait because you’d stop all the other people behind you from moving. And if New York could be described in one word, I think the word most suitable for this city would be movement. As soon as it looks like your chances of getting hit by the oncoming traffic are relatively low, you hurry across the street. Waiting for the light to change doesn’t even increase your chances of staying alive. I’ve seen far too many cars, trucks and even tour buses drive straight through red lights like it doesn’t even matter – like a red light has no place telling a NEW YORK vehicle it has to stop. Stopping is something you just don’t do in New York.

A few months ago, I watched a great documentary, The Business of Being Born, with my mom. We learned that New York has an unreasonably high number of scheduled c-sections. Back in Edmonton, I wondered why. Did it have something to do with the ridiculous, for-profit American health-care system? Well, maybe, but extremely high numbers of scheduled c-sections are a New York problem, not a general American one. Now that I’m in New York, it makes perfect sense. If you don’t have time to wait for a light to change or to say sorry to someone you accidentally bump into, how in the world do you have enough time to push a human being out of your vagina?

Some may call this need for speed insanity, others call it energy. I’m not sure how I feel because… feelings? Who has time for feelings? My feelings come in spurts and jumps here in New York. They play hopscotch, jumping from heart to brain to back again. There are endless possibilities in this city and an exhilarating sense of momentum seems to be in the air, wafting around with the car exhaust and the garbage fumes, available to anyone. Another substance readily available to everyone is coffee. New York probably has more coffee than it has taxi cabs. It makes sense because coffee is needed to fuel this momentum, this speed, this energy, this insanity – whatever you want to call it. Since I arrived, I’ve been drinking way more coffee than I usually do, just to keep up with New York.

I walked across the Williamsburg Bridge a few days ago. I’m used to thinking of bridges as peaceful places, but peace isn’t the first word to come to mind when crossing a New York bridge. Walking on the Williamsburg Bridge felt like being suspended right in the middle of a clash between natural and man-made worlds. I could smell the water which made me think of family vacations, summer and relaxation; yet the roar of the cars and the trains surrounding me contradicted all that. On the horizon stood New York: tall, impressive, overwhelming. I felt small and insignificant, which I am compared to a roaring train, a huge river and skyscrapers. Yet, I also felt powerful and accomplished for being able to walk through all the noise. My legs burned because I had been walking quickly for a long time. My face was sweaty because you’re always sweaty in New York. And, to add to all the contradictions at play on that bridge, I felt more at peace than I had in days walking across the Williamsburg bridge surrounded by all that noise. I wondered if maybe happiness is the perfect mix of noise, sweat and contradictions. But I didn’t have time to wonder for long. I had to keep on walking, keep on moving. This is New York, after all.