One thing you probably should know about me is that my sister, girlfriend and I have a group chat…and in this group chat, we exchange a lot of Lord of the Rings memes. There is no reason for this besides a shared attachment to the imprint the LOTR has left on our collective nerd consciousness. 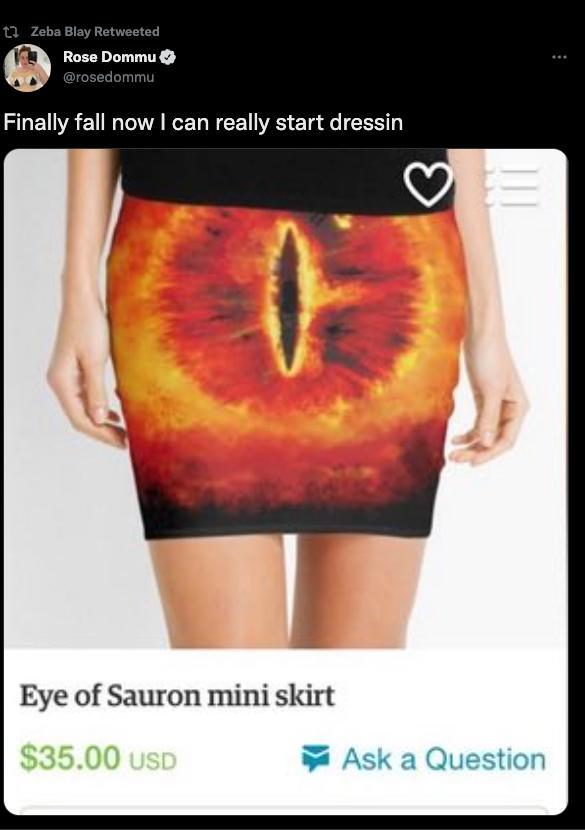 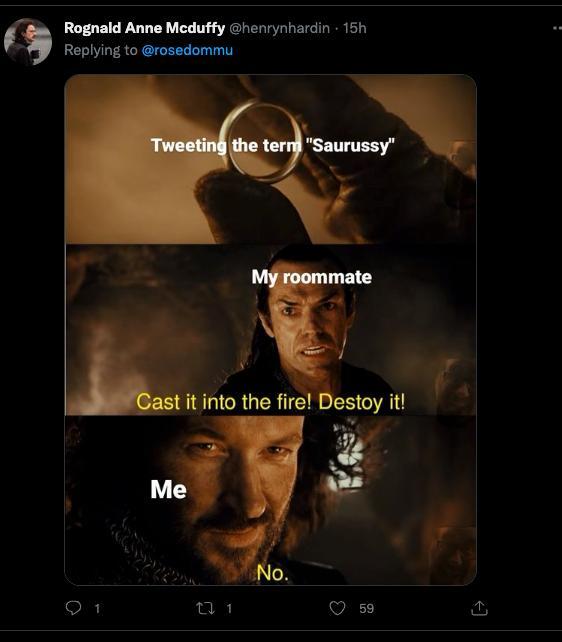 And then my sister responds with:

implying that this guy knows what a menu is

Which, uncalled for, honestly. Or, she might send this to me in lieu of actual advice:

Meanwhile, my girlfriend is just, like, a witness to these exchanges? Also you all are lucky that I, the Nico of the siblings, is the one who responds to the advice q’s because if my sister had that job you might just GET THIS.

And everyone who has had the pleasure of multiple tarot readings with me knows that when drawing the Nine of Wands, I don’t actually read the card for you. I just pull out my phone and play you the below video and say “that’s the card.”

ALL THAT IS TO SAY that when my sister dropped Gandalf Big Naturals — a meme whose details you can probably discern from the name itself, but if you need some assistance is literally just Gandalf photoshopped with big ta-ta’s — into my life, it was a part of a long and storied discourse…but it was also something different.

There was a quality so charming, so artful about this piece that I — and, I think, I’m not exaggerating when I say, thousands of others — found it so magnetic that we paused, we contemplated, we passed it on, and we wondered at what could have inspired the creator. In order for the rest of this to make sense, you need to know that I first encountered Gandalf Big Naturals on TikTok via my sister and then later on Tumblr, and I don’t believe the artist behind it is particularly on either of these platforms, so for my first run-in’s with Gandalf Big Naturals, the artist remained a mystery.

And then, in the desiccated and dying Mordor-esque lands of Twitter of late 2022, I stumbled upon a tweet from the actual creator:

my crowning achievement is on this app is probably making Gandalf big naturals in photoshop when I was recovering from anesthesia and watching him spread across the world :,) I’m glad the concept of Gandalf with huge titties touched everyone hearts as much as it has mine! pic.twitter.com/LOSICPFLLq

And, from there, I reached out and had the absolute honor of being able to ask the creator — Becca T (they/them) — a few questions about their work.

Nico: Can you set the scene for me? You were recovering from anesthesia and you just grabbed your tablet or laptop and got to work? Did you wake up inspired? What was that like?

Becca: So I was recovering from surgery, and me and my fiance were watching Lord of the Rings (great to watch when you can do nothing much except sit around for hours!). The memories of those first 48hrs or so are blurry, but I remember suddenly imagining how cool it would be if Gandalf had big boobs, it just really felt like it would fit him well! It was probably a few more days before I was strong enough to get onto my computer and actually make the image, and I think I posted it right away.

N: How has the reaction to Gandalf big naturals felt to you, especially knowing the whole time that you’d just had top surgery?

B: It has been very funny! It’s always satisfying to make a thing and see people connect with it, even when it’s an image of Gandalf with a huge rack. I’m amazed by the amount of people who make Gandalf big naturals Halloween costumes, some incredible craft there! I honestly had no idea it would be so well received, I guess the people were ready for it?? I like to think that Gandalf Big Naturals is an angel, or some kind of final parting gift from my own boobs, they left me and became a new entity!

N: So, are you a Lord of the Rings fan? If yes, what draws you to the series?

B: I am!! I read the books when I was a kid and watched the movies, I love the expansive feeling of the world and I love the hobbits and their relationships a lot! I also associate LOTR with my fiance, she is a true lifelong fan, and watching the movies together post surgery is a memory I really treasure.

B: It’s been great!! I’m over a year healed and I’m loving it! I still wake up excited that I did it, and excited about my body.

N: Do you have any tips or advice for people looking into or planning for top surgery?

B: It’s so hard because every place is different! I guess maybe my best advice is hang in there!! I’m from the UK where getting top surgery is very difficult due to lack of resources for trans people in the NHS. I moved to Canada and was able to get surgery after becoming a permanent resident. I feel very lucky even though it was a long journey for me! I would say connect with local resources if you can, look to see if there are trans support groups etc. in your area, and trust yourself and don’t give up hope!! If you’re about to get top surgery, I would say try to have someone around who can help you to do stuff in the first week or so, it makes a big difference.

N: So, I know you’re an artist in general based on your social media, and that you do comics, illustration and tattoo! Do you want to talk a little bit about your artistic practices?

B: Yes! I mostly categorize myself as a visual artist, and I do all sorts of things! I see the different parts of my artistic practice as a solar system that orbits around wanting to connect with people and the universe. Having lots of different parts of my practice really helps me from getting bored: comics for example require a lot of time by yourself drawing and writing, whereas tattooing is inherently a collaborative process where I get to be more social, so everything balances out.

Making a memetic image like Gandalf Big Naturals is art to me, and it’s really interesting because by the nature of memes, it becomes disconnected to me as the creator and has a whole life of its own, it’s been fun to watch that happen!

N: And where can people find you (and Gandalf)?

Nico has written 128 articles for us.