Rush Limbaugh isn’t exactly known for “telling the truth” or “being rational” or “behaving like a person with a soul,” but on his conservative talk show this week, he finally told a thing that was not a lie. Citing recent news that the U.S. Department of Agriculture will partner with Des Moines, Iowa’s Drake University to sponsor the first Iowa LGBT Rural Summit, Limbaugh began to panic. What will become of Real Americans when homosexuals are allowed to openly farm their rainbow corn right next door? Said Limbaugh:

Rural America happens to be largely conservative. Rural America is made up of self-reliant, rugged individual types. They happen to be big believers in the Second Amendment. So here comes the Obama regime with a bunch of federal money and they’re waving it around, and all you gotta do to get it is be a lesbian and want to be a farmer and they’ll set you up … They are trying to bust up one of the last geographic conservative regions in the country, and that’s rural America.

He’s almost correct. Correct-er than usual, at least. It’s actually lesbian and bisexual farmers who are being set up to take over rural America. I know this because me and Autostraddle Managing Editor/noted bisexual Rachel Kincaid both recently began using the Obama Regime’s queer farming simulator, Stardew Valley. The internet claims this “game” was designed and programmed by Eric Barone, but I believe we can all agree Eric Barone is just an anagram for Iran Core Be. “Iran” as in Iran. “Core” as in destroying America’s core values. And “Be” as in the Periodic Table’s abbreviation for Beryllium, an element most commonly found in Aquamarine, the bluest version of which gemstone can be unearthed in Madagascar, an island nation off the coast of Kenya. Okay? Obviously Iran Core Be is to Barack Hussein Obama as Tom Riddle is to Lord Voldemort.

Anyway, it’s the most fun I’ve ever had destroying rural America! Let me give you a tour! 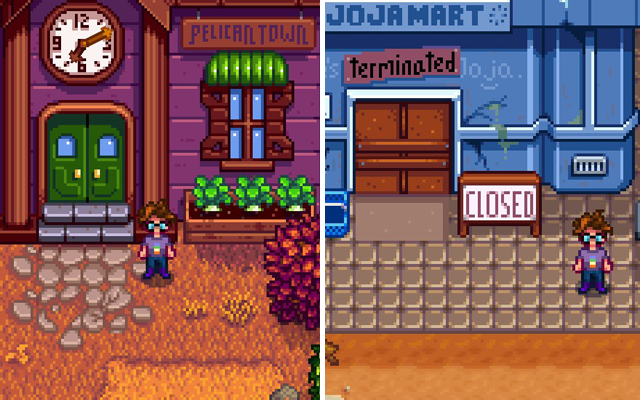 Obviously the main point of Stardew Valley is to destroy capitalism. The villain of the simulation is a punk-ass laissez-faire superstore owner named Morris. He runs Joja Mart, a subsidy of Joja Cola Company, and he keeps enticing the citizens of Pelican Town to shop at his mega mart for super discounted prices, which: a) puts Pierre’s General Store in a real bind, and b) makes everyone assholes. Once Farmer Heather is able to work together with Pelican Town’s citizens to collect a variety of farming bundles, she is able to fix up the community center. This collective spirit drives Morris into a seething pit of despair and so he closes his superstore and leaves town and the people rejoice with the standard socialist revolution balloon release. 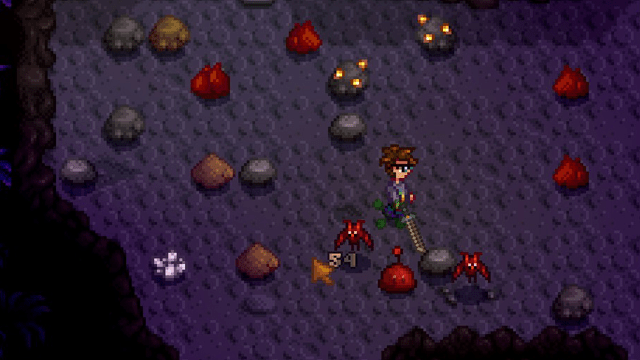 The second most important part of Stardew Valley is learning to destroy the second amendment, a thing that is achieved by teaching homosexual farmers the fine art of wielding yeti tooth blades and lava katanas deep in the bowels of the town’s mines. Plus, the lost art of crafting mega bombs by combining solar essence, void essence and gold ore. What chance to Limbaugh’s Real Americans have against such legit sorcery? 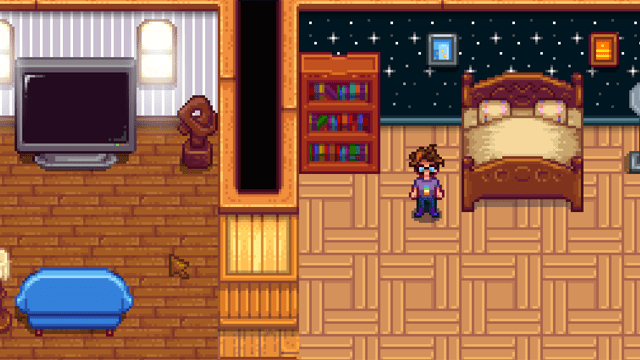 All of these tasks are carried out in the gayest possible ways. For example, the opportunity for alternative lifestyle haircuts and graphic t’s are endless. Here is Farmer Heather in the comfort of her home wearing a Pride t-shirt and looking like she’s fresh from Kip’s chair at A-Camp. 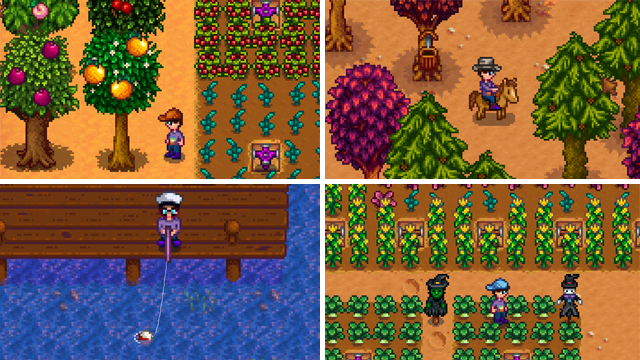 And here is Farmer Heather modeling a variety of queer hats, including the Good Ol’ Cap, the Cowpoke Hat, the Sailor’s Cap, and the Cool Cap. Scarecrows that keep the vultures (and vulture capitalists) away from Farmer Heather’s farm are, of course, witches. 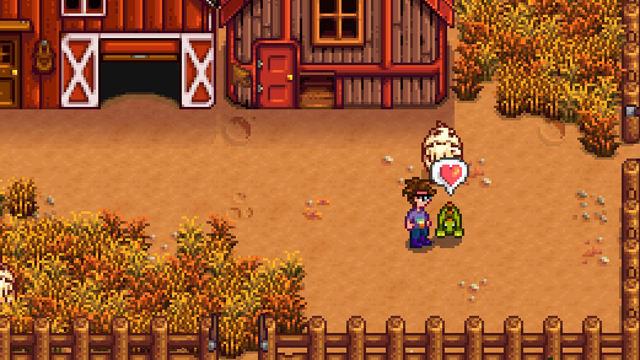 Farmer Heather popped a dinosaur egg she found in the mines into the incubator in her chicken coop and hatched a real life dinosaur into the world. Normalizing “science” and stigmatizing Creationism is obviously an aim of the Obama Regime in this simulation.

It’s a beautiful thing, the destruction of words 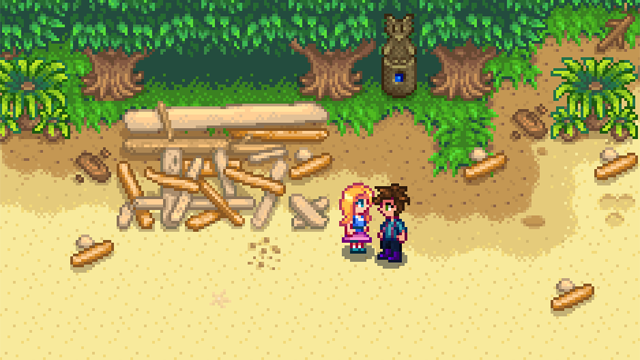 It’s not all collective bargaining and gun-destroying swordplay, though. Stardew Valley is rife with opportunities for smooching. The single women in town are wooed with gifts of coconuts, broccoli, diamonds, iridium battery packs, cakes, goat cheese, wine, and prismatic shards. Once the single women are eight-hearts fond of you, you can present them with a bouquet and they will become your girlfriend. (No need to choose just one! “Polyculture” is an achievement you can unlock!) 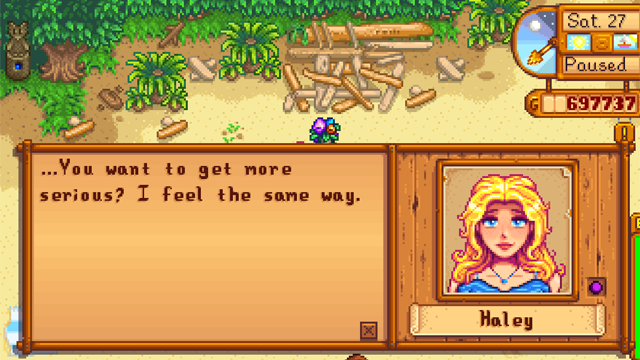 Farmer Heather has kissed Penny while enjoying a late night soak in the steam baths, Abigail while fighting off bats in the mines, Leah after she punched her ex-girlfriend in the face for not supporting her art, Haley on the beach in a treasure hunting afterglow, and Maru while gazing at the sentient cylon she built and released into space. 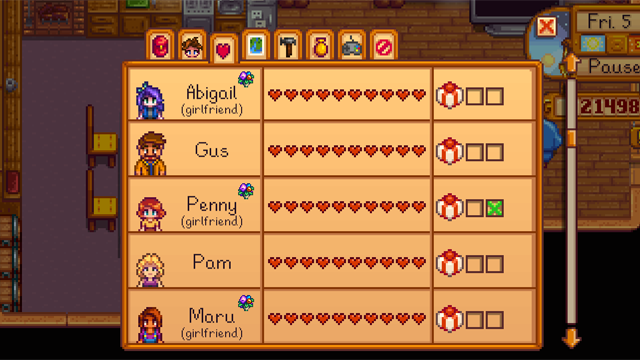