Today’s craving? (I know you were wondering) It’s a chocolate chip cookie and guacamole. Not together. But you know what I mean! 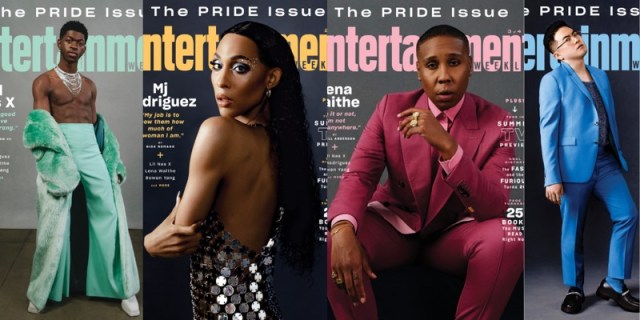 Do I love an entire QTPOC Pride issue? Sure the fuck do!

Entertainment Weekly released their new Pride covers with Lil Nas X, Mj Rodriguez, Lena Waithe, and Bowen Yang. And ok I don’t usually get hype over these things — Pride comes every year after all — but these photos are simply gorgeous and you MUST know.

Also(also.also), Lena Waithe’s cover story was written by Tre’vell Anderson and their partner, Texas Isiah, did the photoshoot. Which lead to this extremely cute moment:

I wrote this cover story, and bae @TexasIsaiah took the photos.

How Alison Bechdel Pushes Herself to Turn Her Life Into Art

The story how of a lesbian couple ‘adopted’ an older friend into their family so that they can legally take care of her as she ages has just left me FULL of emotion, Couple ‘Adopted’ Their Elder Friend, And Now They Live as a Family

“My wife and I (lesbian moms together) have been invited to her cousin’s wedding. She’s marrying the son of a former Republican statewide official who, in the early 2000s, turned the power of his state against gays, especially gay parents.” What’s a Good Wedding Gift for Homophobes?

And speaking of weddings, I super super loved this: From Best Friends to Platonic Spouses

Former ESPN Reporter Says Kim Mulkey Tried to Get Her Fired after a Story Accused the LSU Coach of Telling a Star Player to Hide Her Sexuality. “After Kate Fagan reported that Kim Mulkey urged Brittney Griner to hide her sexuality at Baylor, Fagan said the Hall of Famer asked ESPN to fire her. ”

This Is the Music I Needed As a Queer Teen, you know how “girl in red” has become a code for “is she gay” among Gen Z? Get ready to be introduced to thee girl in red about her song “Serotonin” and vulnerability. (And while we’re here: “girl in red Wants to Follow Her Impulses” by Rachel Charlene Lewis for Bitch Media)

Sort of related? I’ve found the precise “how” of how Americans are getting vaccines and how it’s intersecting with other socio-economic needs, who doesn’t have access, and why, to be important and fascinating: The Era of Mass Vaccinations Is Ending. “To reach the remaining holdouts, America’s approach to vaccine distribution is going hyperlocal.”

From our resident sportsball expert Natalie, “This is going to be awesome” (I gotta say, I agree!) 1996 USA Women’s Basketball Team Set For ESPN 30 For 30 Doc

Ro wanted to know: “Do we still like animal news around here? Because I found some socialist donkeys.” Feral Desert Donkeys Are Digging Wells, Giving Water to Parched Wildlife

I have such a respect for Deb Willis, a true groundbreaker of Black visual imagery and art curation, so yeah I listen to anything she has to say: Reimagining What Monuments Can Be

States Passed 28 Anti-Abortion Bills in 4 Days. Here’s What to Know about the Surge in Legislation.