Who the fuck is Lottie Matthews? Well, now we know!

Following the very exciting news that Lauren Ambrose has been cast as Adult Van (which possibly, hopefully means Van made it out of the woods!) in season two of Yellowjackets, Showtime has now announced who will play Adult Lottie a.k.a. The Antler Queen a.k.a. the cannibal of my heart: Simone Kessell!

In an interview with Vulture following the first season of Yellowjackets, Courtney Eaton, who plays young Lottie, commented on the fantasy casting of her character’s adult version. She told Vulture:

I would love to see who people are casting as older Lottie. It’s hard. Everyone on set was talking about everyone’s different versions if we had adult counterparts. It’s hard! I’m part Asian, part Islander, and I don’t often see that many actresses who are a similar heritage to me.

Eaton’s father is of English descent, and her mother is of Chinese and Māori descent, and I completely understand  — and relate to — her desire not to be whitewashed by casting theories and choices. (She didn’t explicitly use the word whitewashing, but that’s the impression I got from her hesitation about some of the suggested actors.) A lot of fans had put forth Shannyn Sossamon as a potential option for Adult Lottie, but I think Simone Kessell — whose father is European and whose mother is Māori — is an excellent casting decision, and I look forward to seeing how she fits in with the rest of the ensemble cast. Welcome to the cannibal fam!

In additional exciting news, Eaton has been upped to a series regular for season two alongside Liv Hewson, who was promoted last week. So we’ll presumably be getting a lot more scenes of teen Lottie and Van, who we last saw together performing some sort of ritual involving a bear’s heart, an altar, and ominous mutterings in French.

I will continue to hold my own ritual in an attempt to manifest a canonically queer Lottie in season two. You are welcome to join me (BYOBear heart).

I’d also like to take this opportunity to note my own stint as the Antler Queen at my birthday party earlier this summer. Here I am with a Teen Nat: 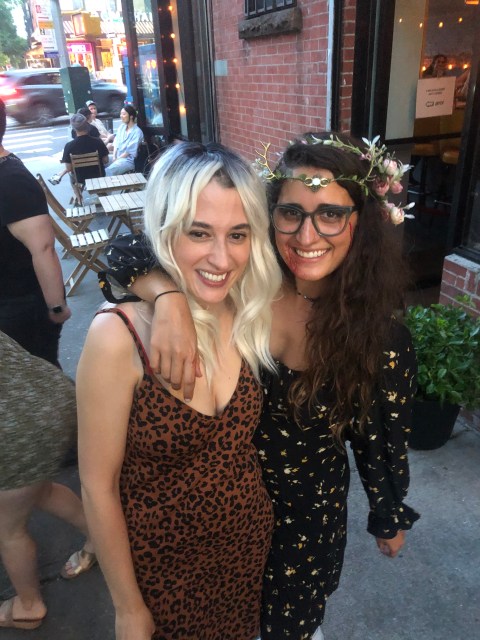 somehow, this was the third birthday in recent years where i was covered in fake blood

But truly nothing can beat my girlfriend’s spot-on Teen Van costume: