Welcome back, Earpers!! It has been…a very long time. Seven months, seven years, time is broken, there’s absolutely no way to know how long it’s been. But the important thing is that we’re back and Team Earp is just as Earpy as ever. So let’s dive right in.

Previously on Wynonna Earp, Waverly and Doc got stuck in the Garden and Nicole unwittingly made a deal with Earp rival Mam Clanton to get them out and started barfing frogs, Waverly killed Mam Clanton to save her girlfriend, Wynonna killed Holt Clanton to try to put an end to their feud, Doc broke up with her over it, and Waverly proposed to Nicole.

And that barely grazes the surface. I love this wacky show.

The mid-season premiere opens in sunny Purgatory, a bit of an unusual but not unwelcome sight. Wynonna is stumbling through the woods, Peacemaker in one hand and a bottle of whiskey in the other. Nicole is giving Waverly a ring in the middle of a motel parking lot on a very familiar couch. 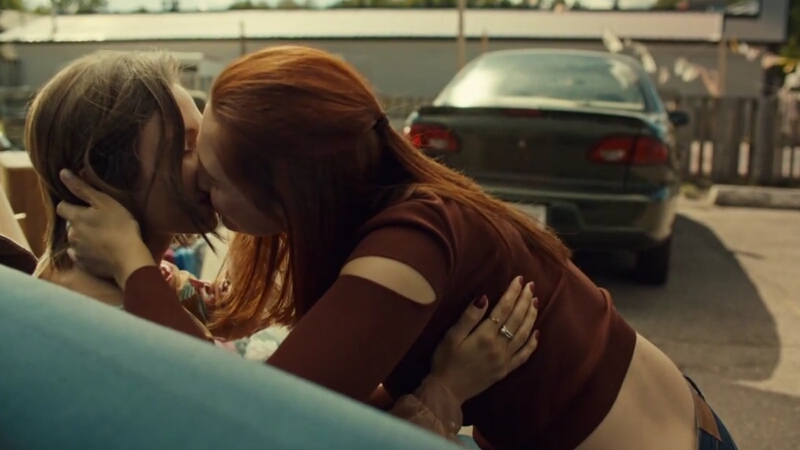 This was a really cute and sweet moment but I can’t think too hard about where that couch has been or I get itchy.

Waverly and Nicole go to Shorty’s to celebrate their engagement for the second time, which is actually just a pre-toast before the next night’s engagement party. I think the tally so far is 2.5 proposals so I guess 2.5 engagement parties is good, too. It’s been a little over a month since the last engagement and Doc and Wynonna are still fighting, hence Wynonna’s day drinking. Nedley is taking over Chrissy’s juice bar and turning it back into Shorty’s (but leaving some of the plants) and Billy the Reaper is still living in the basement. 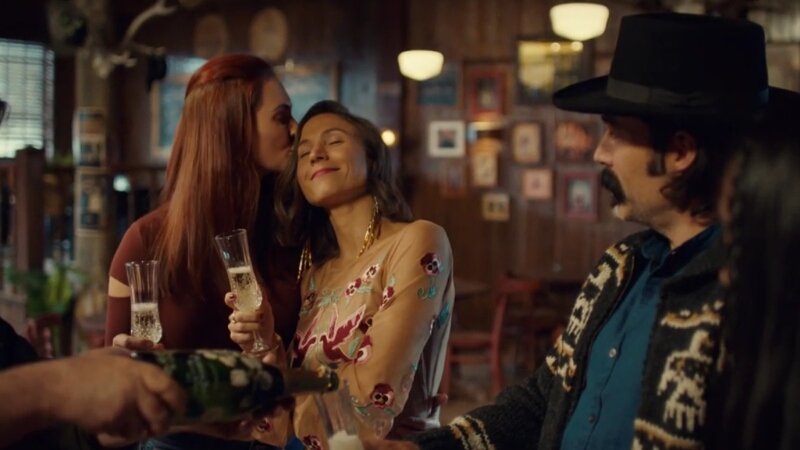 :fights the urge to make an enGAYgement joke: :clearly fails:

On her jolly jaunt through the murdertrees, Wynonna finds a demon and is ready to do her duty when she realizes it’s Amon of Glory Hole fame. Wynonna is drunk and over it and ready to send him to hell anyway, but ultimately spares him. She just wants him to remember that his life (or…afterlife? Unlife?) is in her hands. 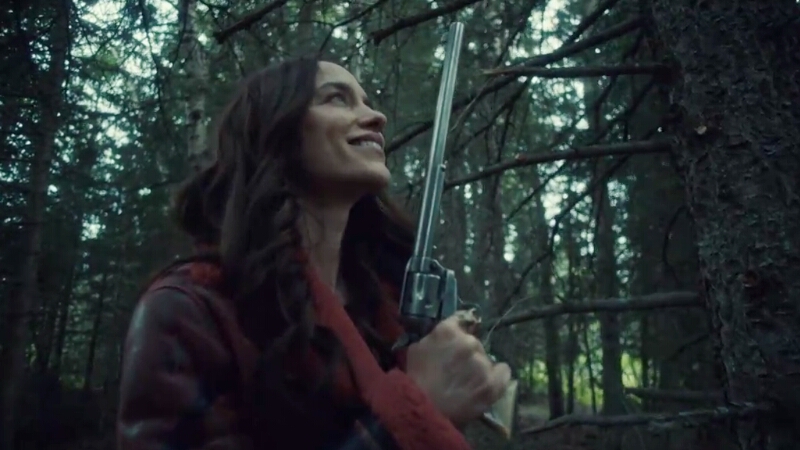 Get someone who looks at you the way Wynonna looks at her magic demon-slaying gun.

Wynonna stumbles her way back to Shorty’s and Waverly sighs at her sister’s drunken reproach of Doc. She wishes they would just fight and make up already instead of this persistent avoidance of one another. When asked why she wasn’t at the toast, Wynonna lies about planning a bachelorette party and even though it wasn’t even a good lie, Nicole and Waverly placate her and let her drag them to an empty strip club where it’s male dancers. 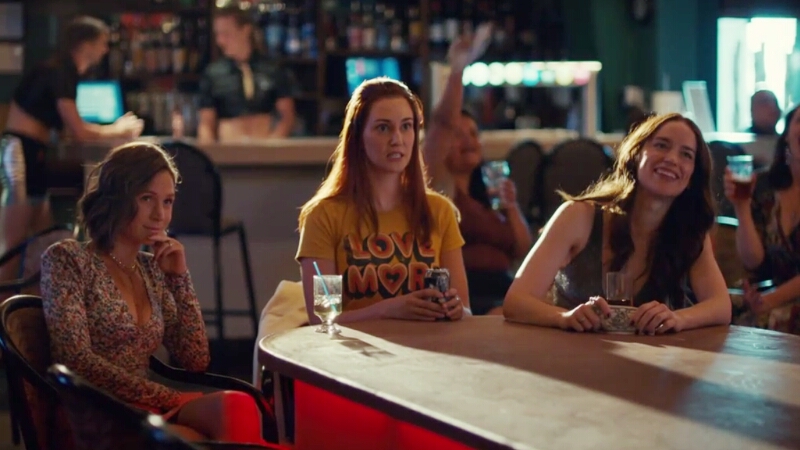 There’s another drunk bride there who loves Waverly’s bisexual bob and drags Nicole away for bride-to-be shots and Waverly tells Wynonna that Nicole just wants a quick, quiet wedding. Wynonna might be drunk but she still knows her sister and remembers the bridal scrapbooks Waverly has been making all her life. Wynonna encourages her sister to ask for what she wants and she’s right; Waverly will regret it if they don’t at least talk about it.

Meanwhile back at Shorty’s, Nedley asks Rachel why she’s hanging around, and Li’l Valdez says she doesn’t really have anywhere to go because she doesn’t like being alone at the Homestead. Nedley hires her as a barback and she’s so excited she forgets her manners and teases him for eating Calamity Jane. RIP. 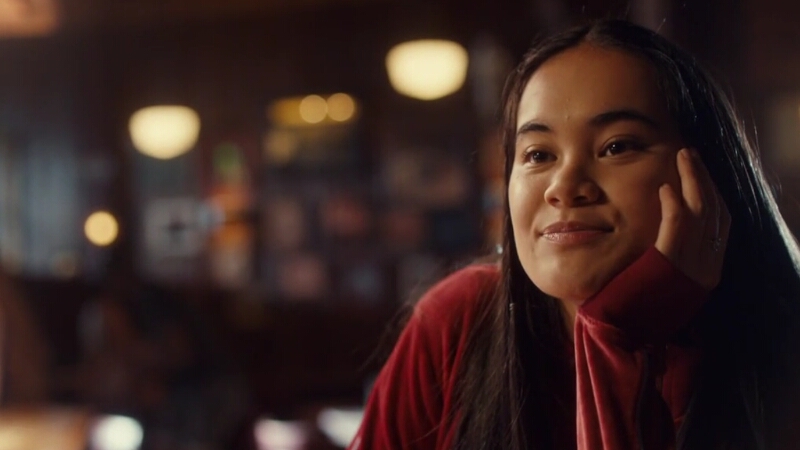 Now I’m imagining a slow day at the bar, Rachel trying to teach Nedley TikTok dances, him being surprisingly good at them.

At the slapdash bachelorette party, the next stripper up is a man named Dimitri with peculiar scars on his back and Waverly recognizes him from the motel parking lot earlier. After his set, he plops down next to Waverly and Wynonna and laments that love is like the tooth fairy. Wynonna thinks he means it doesn’t pay as much as you’d think, but what Dimitri means is that it doesn’t exist. And suddenly I’m a big fan of Dimitri.

Also Dimitri is pan and he says so right out loud and it’s delightful. Waverly insists that love is real and is willing to bet on it, forgetting where she lives and that in Purgatory you can’t just say things like that. Dimitry slips a small vial into Waverly’s pocket and she’s none the wiser.

Later, Waverly and Nicole make their way to the Purgatory Sheriff’s Office to look for a marriage license. Cleo Clanton has been MIA since her brother and mother died but Nicole still remembers where they kept them. Alone in the place they first kissed, Waverly starts to pull Nicole closer but Nicole gets squirrely about it, maybe left over from when this was where she worked and it wasn’t appropriate. 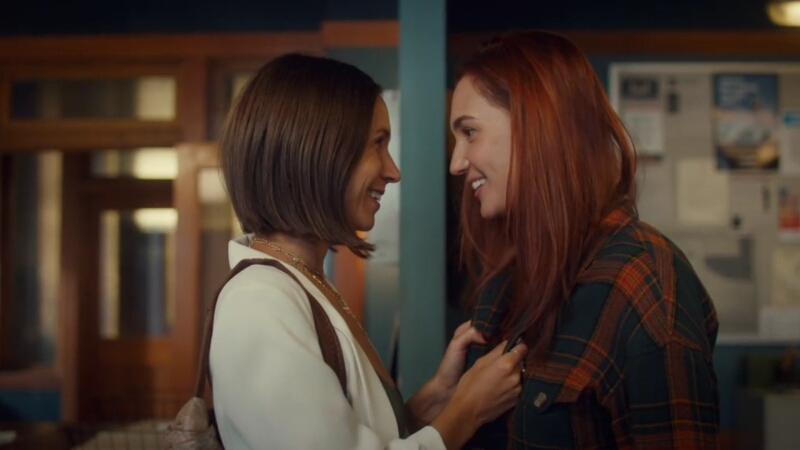 “Kiss me, out of the bearded barley. Nightly, beside the green green…BUNNY?”

Waverly is confused, it’s not like there’s anyone else here. Except she was wrong about that. In only having eyes for her girl, she didn’t notice someone sitting at the desk of the abandoned office. The one, the only: Bunny Loblaw. She is a one-woman City Hall, determined to keep order in this riff-raff infested town if she has to build stocks in the town square. Waverly is flustered and a little glitter floats off of her and lands on Nicole. But it quickly becomes clear this isn’t edible glitter from the strippers when Nicole is overcome with a vision of Waverly in the slow-mo glow of a 90s rom com. 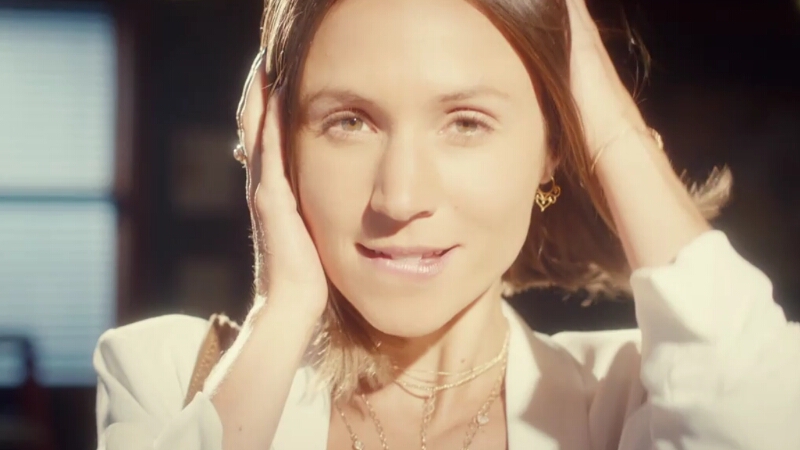 Finally everyone else can see what I see when I look at Waverly Earp.

And all of a sudden, Nicole can’t keep her hands off Waverly, despite Bunny loblawing insults at her and her girl. Waverly is trying her best to say serious and use her adult voice to demand Bunny give her a marriage license while Nicole all but humps her leg. 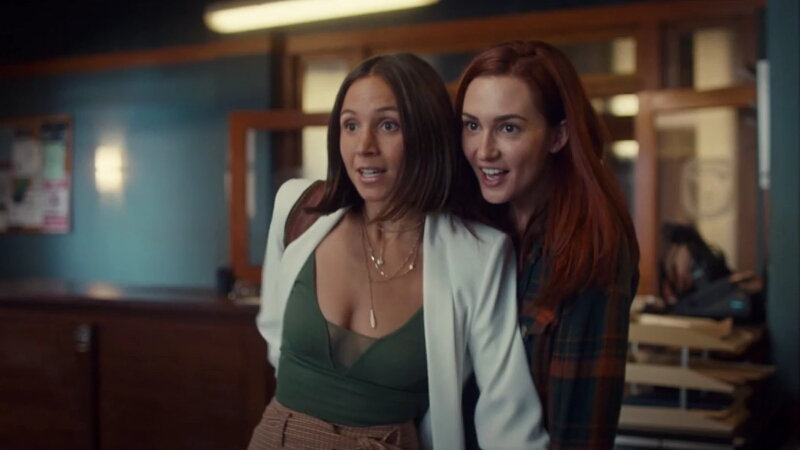 Me @ my friends the second we’re all vaccinated.

Eventually Bunny relents and Waverly shakes her hand to show there are no hard feelings when a piece of glitter falls on her and now Bunny is in love with Waverly, too.

Waverly leaves before she can really register this change in attitude and her next stop is to bring Amon a peace pie, hoping he can wrangle his demon buds into having a truce day to help her convince Nicole to have a proper wedding, since the constant threat of attack is one of the things keeping her hesitant. Waverly accidentally turns her sweetness up to 11 and boops his nose and while she regrets it immediately, it works in her favor since he gets glittered and falls for her too.

Waverly finds Doc lurking around and they talk briefly about Mam Clanton but Waverly doesn’t remember what happened exactly, just remembers touching her. She doesn’t want to think about that right now anyway, she just wants to think about love. 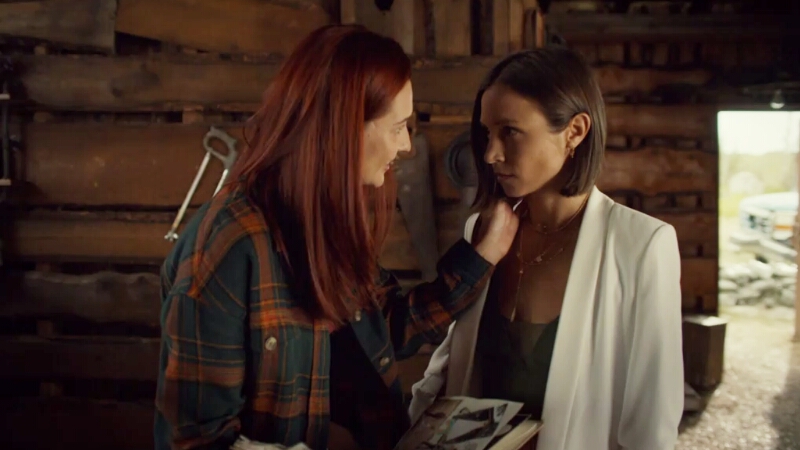 I also am untrusting when people are overly nice to me, so I feel this.

Waverly leaves Nicole to continue to cool off while Nicole just calls after her about needing a wedding hashtag, sounding like Twitter when the ship first set save. WavNic? HeatWave? WayHaught? Nah, definitely not that last one.

As she leaves the Homestead, Waverly runs into Bunny Loblaw, who is here with a bajillion roses to profess her love for Waverly Earp. Waverly simply says, “Nope!” and ignores Bunny’s pleas and promises of a Bend it Like Beckham movie night as Waverly leaves to figure out what the hell is going on with everyone.

Waverly finds Wynonna drunk as a skunk in the trunk of her truck and Wynonna is highly entertained by this turn of events. 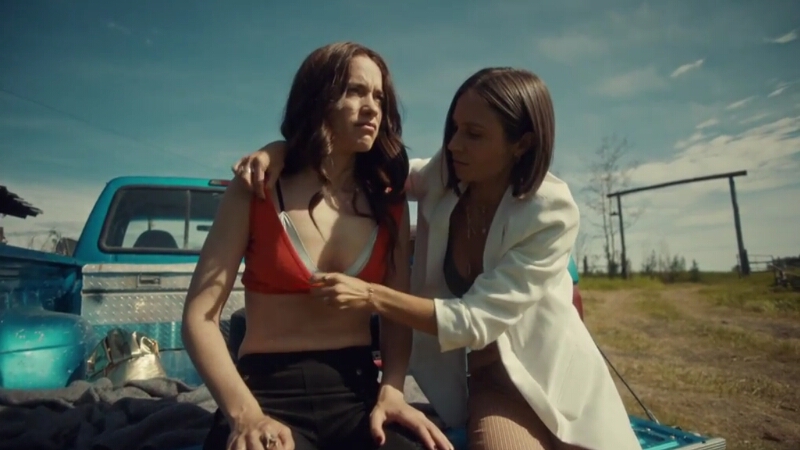 Waverly doesn’t get why she’s suddenly everybody’s thing, and despite Wynonna insisting that’s nothing new, Waverly has a theory about when exactly things started to get all Bewitched, Bothered and Bewildered up in here.

Meanwhile, Doc Holliday goes to look for Cleo at her ranch and finds the last remaining Clanton curled up in a ball near a corpse and crying. She begs him to kill her and as he looks at her with surprise and he’s hit with that slow-release glitter and is taken by the Can’t Hardly Wait effect, too, showing us that it’s not just Waverly people are falling for. 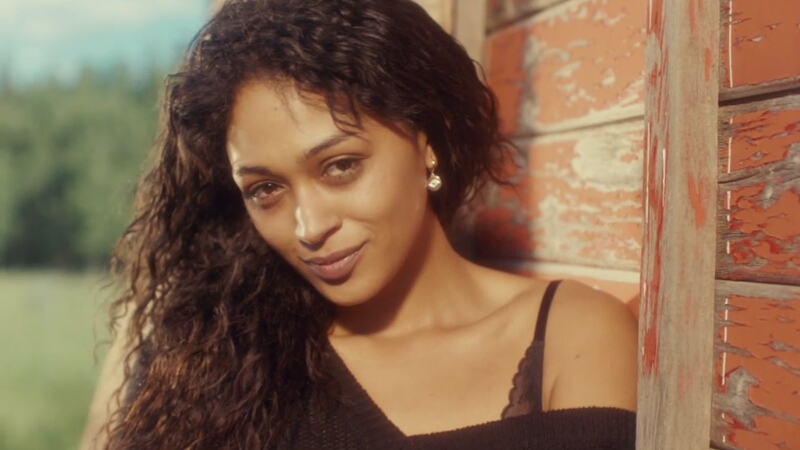 I’m low key in love with Savannah Basley and I can’t wait for her to have more scenes with the rest of the Earp crew.

He flirts with her, gently and softly, and she’s confused about it but flattered and agrees to let him help her.

Next page: Valerie Anne finally realizes love is not a lie.