Blargh I don’t know how to write about wedding feelings this week.

Megan has two sisters. We found out last Wednesday that one of them doesn’t support our marriage, which was like… trying to swallow sawdust? Or play a piano with your forehead or teach a hamster how to cook paella. Or it was like making sense of Lost but you’ve only seen Seasons 1 and 4. It was like being a gluten-free vegan at In-N-Out. It was like 10,000 spoons when all you need is a knife so you can shove it in your own ears.

It was like opening your eyes to find you’ve been dropped off on a weirdo upside-down planet where your future sister-in-law doesn’t believe your relationship is as valid or worthy or as important as hers (and not because you’re a scoundrel or a philandering fool, but because you’re a woman). It was like watching your most favorite person’s heart split open while she cries on a bean bag chair in the living room floor. It was like the worst, the fucking worst! Blargh INFINITY.

I keep feeling the need to quantify this or temper it with some acknowledgment of privilege, but the real truth is that it’s not my sister who did this, it’s Megan’s. I’m now the most privileged between the two of us, and I can’t speak to what it feels like to have your oldest sister disregard your basic existence like this. It’s certainly not as awful as literal death, but it sure as fuck does seem to suck a lot. 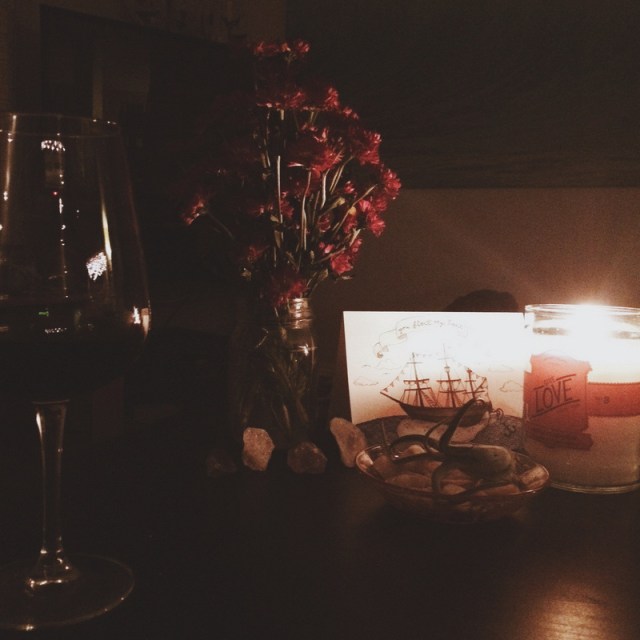 couldn’t power through this post, so megan set up a table of good stuff for me. because megan’s too good for anyone.

I wasn’t going to talk about it here because it’s still raw and still happening. Megan is a fucking saint, so not only does she still love her sister fiercely, but she’s also hoping the rest of the family won’t be hostile toward *Jess over her decision not to attend our wedding with her husband and three kids. She’s worried about Jess’s heart and has been checking in on her daily, reminding her that we still love her, and we’re still coming to her daughter’s first communion the weekend after our wedding, etc. Maybe it’s not that Megan’s a saint — maybe she’s just figuring out how to balance her own feelings with the feelings of someone she loves. Maybe she’s just being a good sister. Anyway I wasn’t going to talk about it, but this is a real-time column about planning for a wedding, and a lot of you have gone through something similar and you deserve to know that you’re certainly not alone! We all deserve to know that even the beautiful parts of being alive can sometimes be a fucking shitshow.

So we drove home from Jess’s house in shock. I spoke first, then Megan.

“Well.”
“I just.”
“Did you see this coming?”
“No. Never.”
“I feel like I’m in an after school special.”
“This is crazy. It’s not like her.”
“I’m livid. I can’t even form words.”
“I don’t even know what to say.”
“While she was talking, I was imagining myself throwing furniture out of windows and screaming. I can’t believe she would—”

And then Megan, “I feel like lying on the bathroom floor and crying forever.”

We’d been living in Wedding Planning Hell World, where every conversation was about to-do lists and money and asking for input on things that neither of us had given a single fuck about three months ago. Every last bit of fun or excitement had been sucked out of us and we were miserable. We almost dreaded seeing each other because it just meant we’d have to talk about this g-d party again. But then this bullshit happened — Jess punted Megan’s heart off the side of a cliff — and as totally fucked as this sounds, we got the chance to just be us again. We cleared our schedules for the night and took turns reassuring each other that we are valid as fuck, that she’s wrong, that her kids would still love Megan as much as she loved them, that we’d said everything we could’ve said that afternoon, that Jess would regret this one day. We sang along to our wedding playlist and drank beers in the parking lot and made grilled cheese sandwiches at midnight. We fell asleep watching Kimmy Schmidt in each other’s arms, as the good lord intended.

We snapped entirely out of Wedding Planning Hell World and back into Us. I wouldn’t say that made it ‘worth it,’ but it’s a silver lining. Another silver lining is that it gave us a great opportunity to remember the people who do support us, and who think that our marriage is as real and important as the morning sun. When we asked Megan’s parents if we could have the ceremony at their house, they were elated — her dad almost immediately planted dozens of purple flowers in the back yard and built the wedding arch using wood from their cabin property in Heber-Overgaard, and her mom’s been polishing silver and cleaning the dishes we’ll use, this beautiful mix of delicate china passed down from both sets of Megan’s grandparents. My parents booked their flight just a couple of days after I texted, “If we decided to get married on April 4, do you think you’d be able to come?” Megan’s other sister has been our personal Frosty + vegetarian pizza angel, and even helped us make half of the escort cards. We’ve received such heartfelt apologies from people who can’t make it, and such ridiculously excited RSVPs from people who’ll be there with bells on. And then there’s you! You’ve helped make this feel like a thing I could do. So on Thursday morning, we decided to switch gears and give our energy to the people who aren’t conflicted, the ones who send their love and the ones who’ll come and be part of this monumental-as-fuck thing we’re about to do. We have the rest of our lives to help people grow past their self-imposed ignorance and see the light, but for the next 10 days they’ll just have to chill like shrimp cocktails because I’ve got a party to plan and a woman to marry. CHEERS, MOTHERFUCKERS.

18. The Stuff Under the Dress: Reader Tiffany suggested I try True & Co, an online lingerie shop dedicated to helping women find underthings they’ll love and that will actually fit. They have an easy peasy quiz for finding the right fit, and a super cool try-on-at-home thing, similar to Warby Parker, so you can try the bras on in your own bedroom and see how they look under various clothes. SOUNDS SO NEAT, RIGHT? I was so excited about this company, but after taking the fit quiz they (very gently, and with a kitten) told me they had nothing in my size. QUE THE BONNIE TYLER. So I’m back to dragging myself to the mall sometime this week, which is totally cool and I’ll be fine and worse things have happened. Don’t forget they’ve got a bookstore! And soft pretzels!

19. THE PLAYLIST: This is coming along! Y’all have added some songs — please add more! — and I’ll spend Friday night getting everything organized into sections (pre-ceremony, cocktail half-hour, dinner, post-cake).

20. Need Moar Signage!: Not gonna lie, I have made zero progress on additional signage since the last time we talked, but damn don’t you love that Snuffleupagus imagery?

via the darling heather hogan

21. Dead People Stuff: The people have spoken, and they are in favor of my dead dad’s ashes on a tea cart! Amen!

24. Hey Speaking of Photography!: The sister who’d arranged the wedding photographer is also the sister who doesn’t respect our marriage, sooooo we probably won’t be using her photographer now. It’s still up in the air. I don’t know.

On with the show!

Alkasd;lfksdjf! By the time we wake up on Friday morning, the following things have to be accomplished: 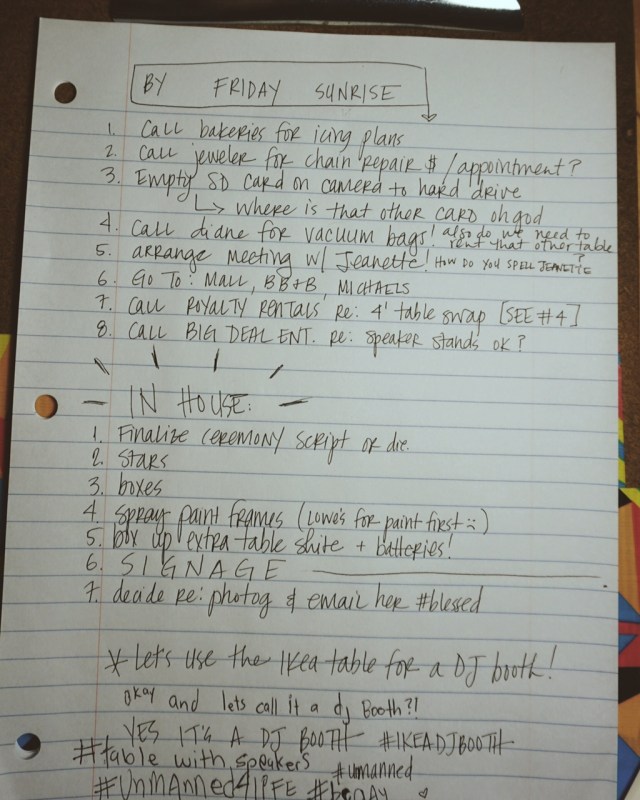 26. It’s Probably Normal to Hate Your Dress For a Day or Two

I hated my dress for a minute and that’s probably fine. It has these full length lace sleeves that I thought I’d love — and I do? — but then I tried it on at like 11pm without makeup or washing my hair and I wanted to set myself and the dress on fire. THIS IS NORMAL. It’s very normal. I bet I’ll like it when I put it on in a few days.

*not her real name

And that’s it, y’all! My little brain is toast and if I don’t publish this now I’ll just sit on it for another week, and then it’ll be a week from now and I really won’t want to publish it, so HERE GOES NOTHING. Are you powering through some wedding feelings that you’d like to put through a wood chipper? ARE YOU ALMOST THERE, ARE YOU IN THE HOMESTRETCH? I can see our hummus at the end of the tunnel, and it is glorious.