A few months ago, my friends came back from San Diego Comic-Con shouting about this show called Impulse that I had never even heard of. I was even told directly that it was very much my brand and that I absolutely had no choice but to check it out. They relayed the story about how they were nonchalantly listening to a panel when one actress was asked to describe her character’s journey in season two and she said, “Awakening.” My friends all sat at attention and started thwacking each other, knowing, as many seasoned TV-loving gays do, that is one of the secret code words sometimes used to describe a coming-out arc. But that’s all anyone would tell me until I watched, so off I went to YouTube to check out this ten-episode series.

I was dubious as I read the description, stating it was about “16-year-old Henry Coles” and couldn’t figure out why my friends thought a show about a teen boy would be up my alley, but they were friends I trust, so I hit “play” anyway. And by George, am I glad I did. Not only is Henry NOT a 16-year-old boy (it’s short for Henrietta!), but the series was a character-driven sci-fi mystery, aka extremely my jam.

The story has Henry in the center of its universe, but all the other planets have their own orbits, too. There’s her mom, played by Missi Pyle, an absolute powerhouse in this rare, dramatic role. Henry’s mom’s boyfriend and the local policewoman, Matt Gordon and Enuka Okuma, both Rookie Blue alumni. Townes, an autistic boy who decides he’s Henry’s sidekick and is an endearing genius of a sidekick at that — and is played by Daniel Maslany of the Tatiana Maslany Maslanys. The Boones, a family of rich jerkwads from hell. And the girl we’re all here to talk about, Jenna Faith Hope, played by Sarah Desjardins (who you will also see in upcoming episodes of Riverdale).

Our story begins when Henry, new to town and only recently entangled with the Hope family courtesy of her mother’s tendency to U-Haul with the men she dates (and they say lesbians move fast), discovers through a series of patriarchal and traumatic events that she has telekinetic and teleportational powers. And this is where I warn you: this show deals heavily in sexual assault. It’s not done gratuitously, but Henry’s trauma and PTSD are explored and discussed and it is sometimes very hard to watch, but it feels, to me, to be a respectful portrayal about how damaging the public coming to the defense of an assailant because he was a football star or “had a lot of promise” can impact the survivor of the assault. I think it’s also important to note that Henry was not raped, but she was still sexually assaulted, and it has still traumatized her. I think too many of us have been conditioned to write off sexual assault as just a really shitty night or just something that just happens in college when alcohol is involved, especially when the assault isn’t rape. But those kind of assaults are still assaults, and they can still traumatize us in ways that we can’t heal from if we don’t acknowledge them as such. I really appreciate the show leaning into that.

Between the manipulative rich family and her emerging supernatural powers, there are a lot of forces at play here that are out of Henry’s control, so she does her best to figure out who she can trust and how she can take back what little control she does have.

But throughout this whole story, we have Jenna. Presented at first as the annoyed potential-stepsister who has to drive this new girl around, we soon learn that Jenna has more layers to her. She is sweet and caring and never once doubts Henry. And she’s SMART. She joins Townes in trying to help Henry figuring out what’s going on with her. Jenna and Henry quickly join the likes of the Orphan Black clones, flashback Alex and Kara Danvers, and other fictional ladies under the umbrella of one of my all-time favorite TV tropes: reluctant sisters. They bounce back and forth between being annoyed at each other’s existence and being willing to die to protect each other, and though even by the end of the season, neither of them are fully ready to admit they love each other as if they had been raised as siblings since birth, I know in my heart it’s true, and I love them for it. 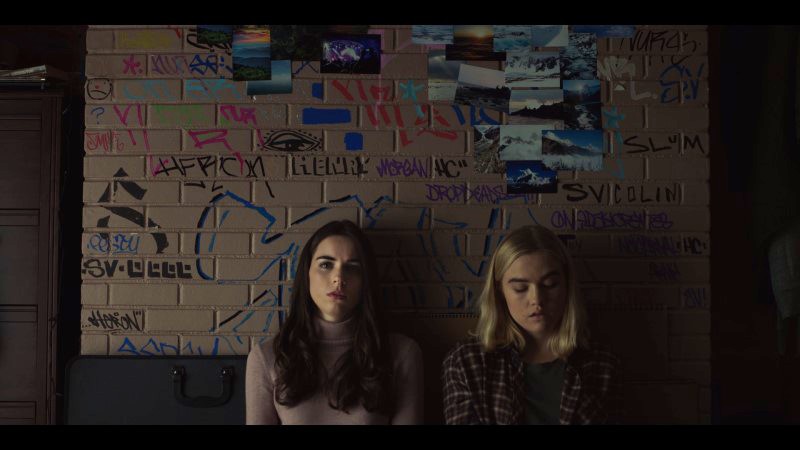 Side by side, but not facing each other. Not yet.

But there’s something else about Jenna. Something… subtle. Something maybe people who have never experienced it brushed off or didn’t notice. But something that felt so familiar to me that it reached out and tugged at my heart, pulling me closer. Jenna is experiencing… well, I guess you could call it an awakening.

Jenna has a best friend, Patty Yang, who she is very interested in keeping happy. Despite Patty not paying nearly enough attention to her, Jenna remains a loyal subject, her eyes lingering on her a few seconds longer than strictly necessary. At one point, when Jenna and Henry go to visit Townes and discover his sister Megan is home from college, Jenna basically shorts out. (Also, possibly relevant, Megan is played by Lauren Collins aka Paige Michalchuk from Degrassi.) Megan looks at her and says that she loves college because getting out of this small town helped her find… her people. She looks at Jenna knowingly, and Jenna agrees, leaving Henry to quirk an eyebrow at Jenna and her newfound nervousness. 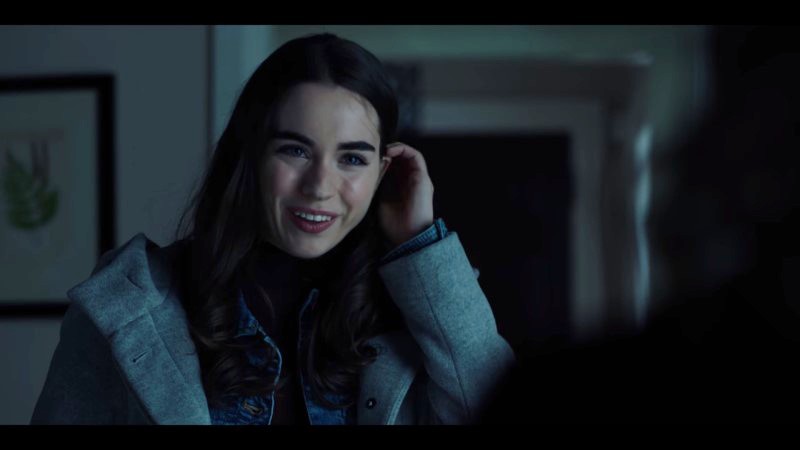 THE SHY HAIR TUCK so relatable

When Patty suggests Jenna date a boy in their grade, she agrees to it; after all, that’s what she’s supposed to want, right? When she knows the time to have sex is upon her, she decides to go to the internet for help, and while she hovers over the “lesbian” category, she doesn’t end up clicking on it. Not yet. But as someone who googled things like “how do you know if you’re gay” and measured my ring and pointer fingers and took online quizzes and generally tried to find definitive external answers to the thing I strongly suspected internally… this really spoke to me.

After she does have sex with her boyfriend, she admits to Henry that it didn’t feel how she thought it should. She feels broken, though Henry assures her she isn’t. I get the impression that Henry has a slightly better handle on what’s going on with Jenna than Jenna does herself, but knows it has to be Jenna’s journey; she’ll be there for her when she needs her.

In the finale, at one point, Henry and Jenna have a rare quiet and uninterrupted conversation. It’s honest and it’s layered and it’s Jenna trying to tell Henry that she is envious of Henry seeming to not care what people think of her because she has to always be Little Miss Perfect. It’s sweet and honest and frankly if I was in charge of awards I’d give them all to Sarah Desjardins and Maddie Hasson for this entire season, but especially for moments like this between them. 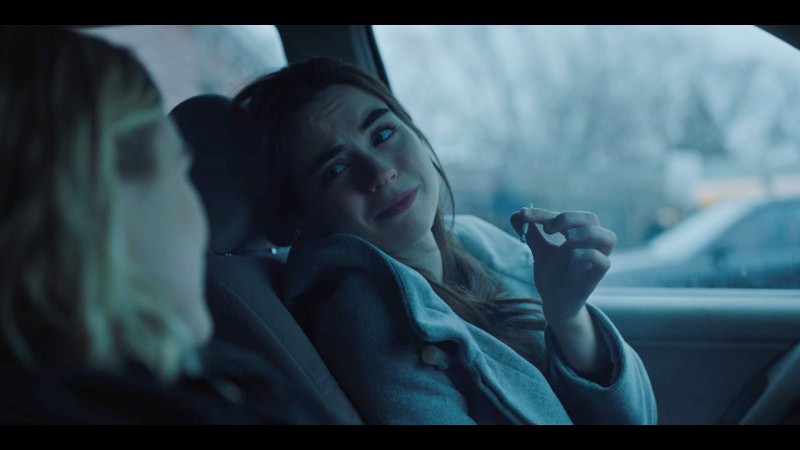 My friend Taylor likes to describe the scene as Henry basically encouraging Jenna to “be gay, do crime.”

And, as with most sci-fi ventures, I love the combination of wild mystical happenings (I ESPECIALLY love a story about someone first discovering/developing their powers) and the metaphors they provide, but if it doesn’t have complex, strongly acted, interesting characters to ground it, it can easily fall through the cracks of “teens with powers” stories. And there’s something about Jenna that really draws me to her. Her empathy, her kindness, and her quiet strength are all things I still aspire to emulate; her performative happiness, her inability to ask for help, and her latent queerness are where I see my teenage self reflected back.

Even though I’m 32 now, the world did so much damage to me between the age I realized I liked girls the way other girls liked boys (14) and the age I finally came out (22), that even after a full decade of living my life out and proud, making up for lost time by becoming a professional lesbian, and surrounding myself with only the most supportive of my family and friends… stories like this still heal me.

And, since I’m speaking so highly of these teenage girls and their character development and their relationships with one another, perhaps this will come as no surprise to you, but I’m delighted to report that over half the episodes have women credited as writers, and, in what I believe is an even rarer feat, over half the episodes are directed by women as well. (Plus one of the showrunners is Lauren LeFranc, who has also worked on Agents of SHIELD, and was a delight at NYCC.)

All this to say, despite what your preconceived notions might be about a YouTube original series, please give Impulse a go. I think the production value, narrative quality, character development, and overall heart will suck you in and leave you forgetting you aren’t streaming on the same platforms Jessica Jones or Runways are on. Season One is available for free on YouTube now, and season two will be available on YouTube Premium starting October 16th.

Just a nerdy, TV-loving, Twitter-addicted Hufflepuff who loves reading, watching, and writing about stories. One part Kara Danvers, two parts Waverly Earp, a dash of Cosima and an extra helping of my own brand of weirdo.

Valerie has written 206 articles for us.