All of western civilization is UP IN ARMS over the fact that the upcoming brand spankin’ new Buffy the Vampire Slayer movie will not be written by Joss Whedon. It will instead be written by Whit Anderson, who just happens to be a ladyperson and not Joss Whedon. Not Joss Whedon watched Joss Whedon’s version of Buffy the Vampire Slayer on teevee in the golden days of her youth and was super into how the character of Buffy was portrayed: smart, capable, ASS-KICKING, but “also allowed to be feminine.” (<– not touching that one.) 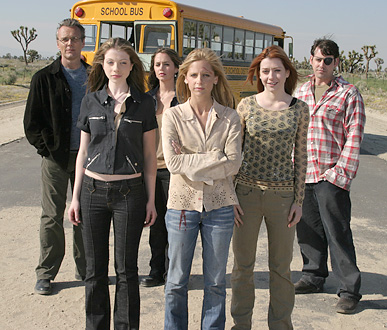 The ‘reboot’ (such a missed opportunity to use ‘revamp’) is being compared to Christopher Nolan’s slick take on the Batman franchise, in that it’ll keep the basic themes of destiny, love and sacrifice, but in a more modern setting with probs mind-blowing special effects, etc.

So basically what you’ve got here is a young woman who was a fan of a show as a teenager, grew up, honed her skills as a screenwriter (hopefully), and is now rethinking the show’s angle by putting together what might be the ultimate fanfic. And like, people are super pissed. There are hashtags on twitter and everything.

Here’s what I think: Joss Whedon is an epic genius / can do no wrong. Was he on our list of people who can do no wrong? Maybe he should’ve been. Joss Whedon gave us Buffy! Willow and Tara! Dr. Horrible! River Fucking Tam! HOWEVER, Joss Whedon also gave us Dawn, brought Buffy back to life for season six, took away Spike’s badness and killed Wash, which no, I am still not over.

I’m disappointed in everyone’s immediate hissyfit over Whit Anderson. I get it – I do – Buffy is Joss’s heartsoulbrainchild and I loved the original movie SO MUCH and the television series (after I bought the boxed set a few years ago because I was obvs wayyy too cool for vampires in the nineties) (I was also too cool for Dawson’s Creek, which is a mountain of regret we’ll discuss another day) but, I mean, did you read the season eight comics? Those were written by Joss Whedon and they were kind of crazy.

While I don’t usually condone supporting someone based strictly on their gender, I kind of do in this case. What will Buffy’s story look like through the brain of a woman who’s loved the series for years and years? I don’t know and I’d kinda like to find out. I think it’s good to give someone a chance to fuck up before you yell at them about not being Joss Whedon, you know? Go see Avengers on it’s opening weekend – that’s a solid way of showing your Whedon support. Ok now it’s your turn to tell me how stupid / wrong I am! Or we could just list our favorite River Tam quotes. It’s up to you guys.