A disclaimer: this is not going to be a balanced, judicious critique of Carl Paladino’s speech in Brooklyn this Sunday as a political standpoint or campaign move. It will mostly just be a list of all the reasons we hate him as exemplified by this speech. We feel this is largely justified. (@nytimes)

To recap, for those who are not following every development in the New York gubernatorial race, here are things that Carl Paladino has said w/r/t The Homosexuals:

1. Children should not be brainwashed to turn into them.

2. Because that’s not how God created us!

3. Also, our children will be “much better off and much more successful” if they get married and raise a family.

4. It would be terrible if they thought that homosexuality was “a valid and successful option.”

5. BECAUSE BEING GAY AND HAVING A MARRIAGE AND FAMILY ARE MUTUALLY EXCLUSIVE. OBVS.

6. His opponent, Andrew Cuomo, marched in a gay pride parade earlier this year, which makes him a disgusting homo-loving queerface who cannot be allowed to set an example for our children. (Okay, those are not his words verbatim, but I think you get the idea.)

One thing Carl Paladino DID NOT SAY was that “There is nothing to be proud of in being a dysfunctional homosexual.” It may or may not have been in the text of his speech as written, but he DIDN’T SAY IT OUT LOUD YOU GUYS, so pipe down, okay? Lest you be misled by these statements into assuming something that is not true, Paladino’s campaign wants you to know that “Carl Paladino is simply expressing the views that he holds in his heart as a Catholic… Carl Paladino is not homophobic, and neither is the Catholic Church.” He has a gay man on staff, guys!  That’s almost like having a gay friend, except that you have to pay them to be around you and make a career out of denying them their rights and basic humanity. (@queerty) 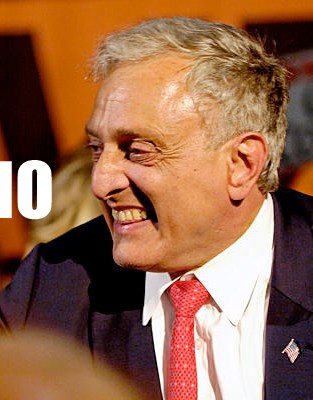 Cuomo’s campaign has responded to this with:

“Mr. Paladino’s statement displays a stunning homophobia and a glaring disregard for basic equality. These comments along with other views he has espoused make it clear that he is way out of the mainstream and is unfit to represent New York.”

It’s worth pointing out that polls indicate that 58% of New Yorkers support gay marriage, contradicting the claims of Paladino’s campaign that the “majority of New Yorkers agree with him.”

Our number one feeling on this is This Guy Is An Asshole, and our number two feeling is how sick and tired we are of the campaign tactic where you throw the gays under the bus and then invite everyone else to get on the bus to the polls and then vote for you. We’re tired of that seeming like a feasible enough plan that people keep doing it. We’re amazed and disgusted in particular at the fact that almost immediately after a series of suicides where innocent young people have chosen to kill themselves rather than live as a gay person that anyone, anyone could possibly think this is a choice. In particular I am really over the assertion that you will be “much more successful” by making the life decision to be a heterosexual. Somehow that seems almost saddest of all – the absolute height of not understanding this issue – to bring up how much more successful we could be if we only learned to live in a way that made a little bit of our hearts die every day. Really? This is how we’re doing homophobia now?

I don’t imagine that the people reading this necessarily had Paladino 2010 signs on their lawn before; it’s probable that we’re preaching to the already-incensed choir here. And honestly, I don’t know shit about Cuomo (yet), maybe he sucks too. But we’re all partially responsible for the political discourse of our country in general, and with midterm elections coming up it might be a good time to consider what we want that discourse to look like. I mean, less homophobic, obvs, but maybe also one where no one could get ahead by picking an unpopular demographic and vilifying them to curry favor with another voting block. I know, right? What an idea.