As we can all imagine (and as some of you know), evangelical Christian college campuses are not the friendliest to LGBTQ students. Attempts to create supportive communities have been sporadic and met with limited success. However, according to two Gordon College alumni writing for The Atlantic, Philip Francis and Mark Longhurst, there’s new hope in 2014: “[O]ver the past two weeks, an LGBT group at Gordon College [OneGordon] has made itself impossible to ignore.”

A little background: Gordon College is a small evangelical college near Boston that recently made the news when its president, D. Michael Lindsay, signed the petition that asked Obama to include religious exemption in the executive order prohibiting federal contractors from discriminating based on sexual orientation. The backlash brought lasting consequences.

What might have gone unnoticed at Gordon College 10 years ago received widespread coverage in national news outlets, such as The Boston Globe and The Washington Post. The public ramifications were also severe: The mayor of Salem, Massachusetts, cited concerns and canceled a longstanding building contract with Gordon. The New England agency responsible for accrediting private colleges and universities decided to review Gordon College in its upcoming meeting, even though the college had not been scheduled for review until 2022.

They’re right; ten years ago, the same move by Lindsay still wouldn’t have surprised anyone, but it also wouldn’t have drawn so many reactions. We’ve come a long way! Even more remarkable, strong dissenting opinions emerged from within the Gordon community that called for Lindsay to rescind the petition. What was once a unified institutional voice has splintered. Obviously, I’m not saying that Gordon College never had vocal LGBT students, alumni or faculty until very recently, but that OneGordon and similar alliances at Christian colleges around the United States now have momentum on their side. Now they’re louder than the colleges. 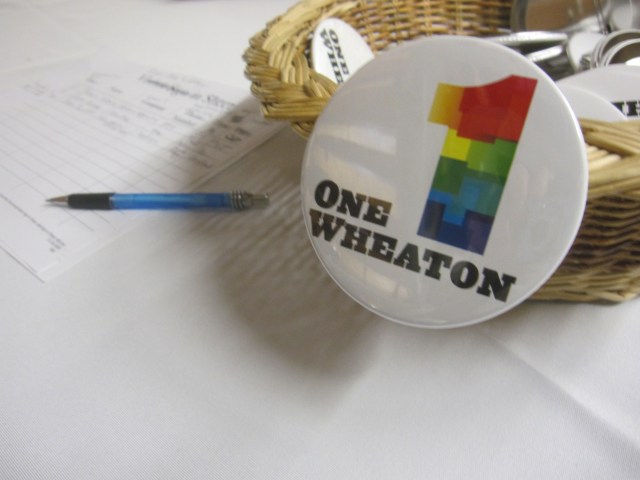 This is especially exciting because until recently, the Christian universities were pretty successful at deterring or ignoring LGBT-focused dissent. For example, like most Christian colleges, Gordon College has a policy on homosexuality that loves the sinner and hates the sin: “…there are clear prohibitions against same-gender sexual relations in the Scriptures. It is important to note that the Gordon statement of faith and conduct does not reference same-sex orientation — that is, the state of being a person who experiences same-sex attraction — but rather, specifically, homosexual acts.” It also reminds us that premarital heterosexual relations are also prohibited, and after all, “we are all sinners in need of grace, all called to redeemed humanity in Christ.” The same policy applies to their faculty: “Gordon College does not discriminate in hiring based on a person’s sexual orientation… provided they can affirm their support for the College’s Statement of Faith and agree to abide by the Statement on Life and Conduct.” Essentially, if you’re at Gordon College, it’s okay to be a gay, as long as you don’t actively gay. Shockingly, this stance doesn’t foster a truly safe environment for LGBT people, and many students and faculty responded by staying closeted, isolated and paranoid. Paul Miller, an ’08 alumnus who worked at Gordon for three years after his graduation, told the school newspaper that he “spent every day… thinking, ‘If they knew I was gay, I’d be fired.'” Miller went on to found OneGordon.

It’s about the same at other major Christian colleges. George Fox University, they of denying housing to a trans student fame, threatened to fire faculty members who publicly supported OneGeorgeFox, the LGBT student-alumni alliance, effectively silencing them. At Harding University, where out LGBT students were at the very least verbally abused, the successful publication of a queer zine was quickly blocked by the school networks. Last year at Baylor University (whose lifestyle policy forbids LGBT advocacy as well as LGBT behavior), the student senate voted to ask officials to remove “homosexual acts” from the code of misconduct. The university declined to publicly acknowledge the matter. Baylor also declined to recognize a Sexual Identity Forum that was formed in 2011.

The proposal to remove “homosexual acts” from Baylor’s sexual misconduct policy is also interesting in that its supporters weren’t necessarily supporters of LGBT students. They just thought it was redundant. “It is not saying that Baylor is OK with homosexuality… It is saying that homosexual acts are wrong but heterosexual acts committed outside of marriage are also wrong. It is making it more equal.” It’s the same logic as the tail end of Gordon’s homosexuality policy, as though retroactively declaring these sins equal would make LGBT students and faculty “more equal” in the eyes of the administration or in social settings. Semantic battles aside, the student senate was denied a dialogue with school officials because the student body president vetoed the proposal — because he was sure the university would reject it. He’s probably right; when colleges have bothered to respond to LGBT groups, their messages basically amounted to: Sorry you’re offended, but we’re not changing anything.

Even the LGBT groups in the news now were almost silenced before they gained much traction. When Miller tried to buy the domain name OneGordon.com, he discovered that it had been preemptively bought by an individual in Oregon who opposed LGBT rights. The domain names for other One[ChristianCollegeName] sites were also taken. Miller had to threaten legal action before the person in Oregon gave them up. This issue may seem small, but names—even domain names—are powerful tools in legitimizing movements, and these URL-reserving shenanigans were clearly intended to keep the groups from gaining more publicity and more supporters.

OneGordon is here now. So are OneWheaton, OneGeorgeFox, OneWestmont, Biola Queer Underground, BJUnity, Cedarville Out, Messiah College Inclusive Alumni, Goshen College, North Park University Queers & Allies, and Seattle Pacific University Haven. And unlike the students at Baylor, they’re demanding full equality for all LGBTQ students and faculty, along with providing support for those still on campus. Zach Alexander, a member of the OneGordon steering committee, outright rejects Gordon’s orientation vs behavior dichotomy: “[The dichotomy] does not hold water. Singling out LGBTs for special restrictions on their behavior is essentially the same as discriminating against them for their identity outright. And the Supreme Court agrees. In Christian Legal Society v. Martinez the majority found that exclusion based on homosexual ‘conduct’ was equivalent to exclusion based on ‘status.'” In case you were wondering, Ruth Bader Ginsburg wrote the majority opinion on that case, because she’s a goshdang badass.

I think it’s safe to say that current leaders of Christian colleges won’t change their position on homosexuality in the near future. But Francis and Longhurst point out that “most future evangelical pastors, theologians, and leaders will be graduates of these institutions.” In a shockingly short amount of years, groups like OneGordon have established their voices beyond Christian campuses, forming a cross-country network of support and advocacy. It’s an exciting development, and I’m excited to see what they accomplish next.