Last week, the Associated Press reported that neither the Texas nor the Mississippi National Guard would be following the Pentagon directive to honor legal marriages between same-sex couples for several important benefits purposes, including medical care, housing, and family separation allowances. Couples were turned away from installations in Texas beginning Sept. 3, when the policy went into effect.

Both states have attributed the moves to their bans on same-sex marriage, and federal installations in each state will be required to process the applications per federal policy. But the number of facilities operating under state versus federal policy varies by state, and some service members have already complained about being referred to federal installations hours away from their homes. 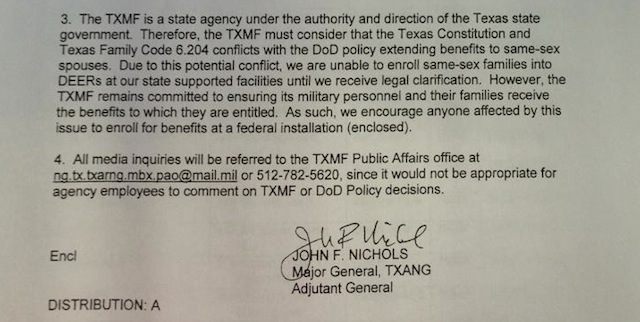 The memorandum from Texas Military Forces Major General John F. Nichols announcing the decision not to process same-sex benefits at state facilities (via The Blaze)

National Guard soldiers fall in one of two categories: Title 32, which encompasses state level jobs, and Title 10, which designates federal positions. Title 32 soldiers operate under their state’s governor, while Title 10 soldiers are subject to federal policy set by President Obama as Commander-in-Chief. State forces, then, follow policy set by the governor even when it conflicts with federal rules. That makes policies like the ones in Texas and Mississippi both legal and out of federal control.

“We are aware that some states have determined that their military departments would not be in compliance with state law if they were to use their state funded personnel and facilities in enrolling same-sex spouses of National Guard Members in the Defense Enrollment Eligibility Reporting System (DEERS),” the statement from spokesman Major Jon Craig reads. 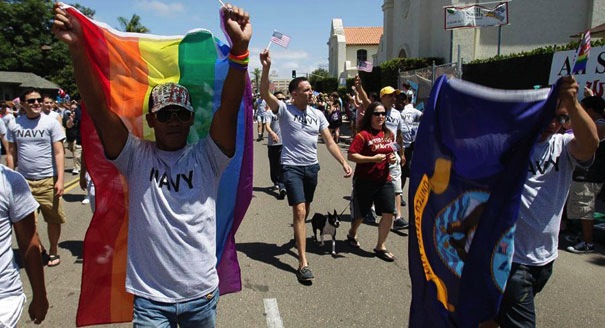 So far, officials in the 13 other states banning gay marriage have indicated they will follow federal law, the AP reported. However, the split nature of National Guard forces means other states could technically follow in Texas and Mississippi’s footsteps if their governors decide to stand by state law.

The situation is a good reminder that the Defense of Marriage Act dust has not settled. As LGBT service members apply for benefits and protections for their same-sex partners and families, states must continue to evaluate their positions and determine when a state law that conflicts with federal law is worth defending.