How much Sarah Croce can you take in one evening? Two or three hours? Well I have this teaser trailer for her new web series, Skip Trace. It’s only a minute and eight seconds long, but that’s a start.

Skip Trace is a web drama about two best friends (played by Sarah Croce and Darlene McCullogh) from Brooklyn who happen to be bounty hunters. It’s worth noting that 4/5 of the all-female production team identify as lesbian or bi and 0/5 identifies as Ilene Chaiken, so. 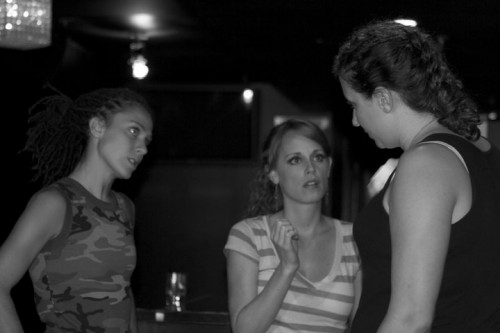 If you live in the New York area, go to the Skip Trace Premier at Stiletto’s Labor Day Party on September 5! There will be games and prizes and possibly more Sarah Croce than you can handle. Is that a thing?

Sarah3: Oooh want to know about our games for prizes for the launch?
Laneia: Yessss games.
TELL ME
Sarah3: Cuffs n’ Cream is a pie eating contest. You’re handcuffed to a partner
and you have to work together to eat the pie, then uncuff yourself.
Another is Pin the Cuff on the Skip, which is like pin the tail on the donkey,
but with a hot woman poster and cutouts of handcuffs.
Laneia: Hm
Sarah3: And scavenger hunts!
Laneia: Will you hunt for things in pies?
Sarah3: All the pies will be eaten by then, most likely.
Laneia: Who is making the pies?
Like, are these your pies?
Will people be eating your pie for prizes?
Sarah3: Eating my pie is a prize.

More tangible prizes include baked goods by Anita at Electric Blue Baking Company, official Skip Trace t-shirts and signed prints of Sarah as Miss April! Be sure to mention this article that I authored, so Sarah will say, “Oooohhhh!” in the style of ‘I just watched two baby koalas wrestle!’ and probably give you a side/bro hug.

Skip Trace will premier for the rest of us at 5pm EST on September 13. Follow Sarah and Skip Trace on the Twitter machine! Be a fan on Facebook! Get a tattoo! Feed your dog!

Laneia has written 926 articles for us.