The Sister Spit – Next Generation 2011 Tour begins tonight in Oakland, CA, and I have a lot of feelings about it. Take a look at this fancy promo poster. 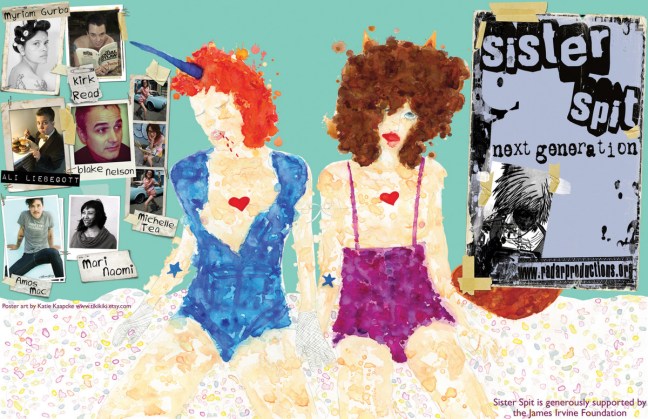 It’s like it has RELEVANT TO YOUR INTERESTS just stamped all over it, right? Like they came to you in the cloak of night and sucked some wishes from your heartbrain and then called Ali Liebegott and asked her to clear her schedule. I was depressed for a full 72 hours after finding out there isn’t a Phoenix stop on this tour.

I still can’t talk about it.

The Next Generation of Queer
Sister Spit was established in San Francisco in the early 1990’s as a weekly all-female open mic series, co-founded by Michelle Tea and Sini Anderson. The duo launched the first Sister Spit national tour in 1997: 2 vans chock-full with cutting-edge dyke female writers and performers. Since its inception, Sister Spit has crossed the country many times and re-merged in 2007 as Sister Spit- Next Generation featuring established writers with young, emerging queer and queer-influenced artists of all genders.

So this is all very exciting and special. I mean, they’re essentially doing this for you, you know? YOU. When I saw Sister Spit in 2009 (were we ever so young?), it basically changed my life. That sounds so hyperbolic and precious, but sometimes these things happen — these life-changing things. Because it wasn’t even so much what they read or said or showed or sold that night, but that they were doing it at all. There stood proof that it was totally fucking possible to have an art / culture-based, community-seeking grand plan and then MAKE THAT HAPPEN and make it matter. I don’t know, I feel like I get really effusive about this too often, but it was like you could feel the energy and determination and excitement in the room. It feels the same way when everyone who works at Autostraddle gets together, which is why, in addition to the promise of koosh ball wars, I so wish we had an office. 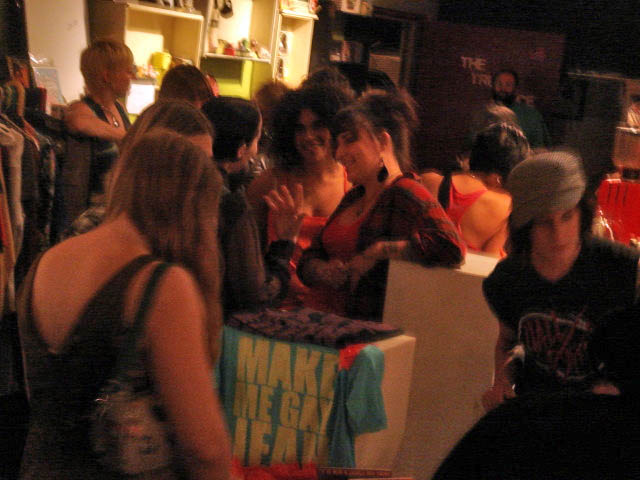 But Sister Spit! The most especially special and interesting part of the latest Sister Spit lineup is that there are MEN in the van for the first time ever. It’s Sister Spit / Mister Spit! And not just any men, my darling dears, but men like Kirk Read, whom I will introduce properly in just a bit, Blake Freaking Nelson (everyone born between 1976-1984 has just collectively died of OMG) and Autostraddle’s favorite FAVORITE, Amos Mac.

Let’s get to know the Spitters! I bet they don’t call themselves that.

Michelle Tea: Duh. She’s the badass who co-founded this badassery of Sister Spit; wrote four memoirs, the novel Rose of No Man’s Land, a collection of poems; is involved in and has founded a bazillion other projects and stands like a superhero, because maybe she is one. Tea is currently working on a sci-fi novel, among other pieces, so there’s really no telling what she’ll read from on this tour. She’s Michelle Tea I mean come on.

Myriam Gurba: Author of Dahlia Season, a short story and novella collection that won the Edmund White Award in 2008 and which I have not read but now wish to. Here’s a little pinch from her bio: “Last but not least, her favorite animal is the rabbit, her favorite color is black, and her favorite butch is Midwestern.”

Ali Liebegott: Author of The IHOP Papers, which we read for our Read a F*cking Book Club in January and had a lot of feelings about! She’s currently writing and illustrating a new novel, The Crumb People, about a post-September 11th obsessive duck feeder. I feel like this book has no choice but to be amazing, based strictly on that summary.

Amos Mac: Founder, photographer and co-editor of Original Plumbing, the first magazine dedicated to FTM culture and seriously hotsexy FTM photography. He’s also working on what is probably the most exciting project you’ve heard about in a while: Translady Fanzine [be a facebook fan], which will be available in very limited quantities this summer. You can go ahead and flip the fuck out entirely. I did.

Mari Naomi: Artist, author and illustrator of the graphic memoir Kiss & Tell, and self-publisher of Estrus Comics since 1998. From her Artist’s Statement: “Despite having loads of opinions about most given subjects, I am utterly passionate about not taking myself seriously.”

Blake Nelson: Author of Girl, Paranoid Park, Destroy All Cars and Recovery Road. Nelson’s first novel, Girl was serialized in Sassy magazine wayyy back in the nineties and it was a very big deal because here was this guy writing from the POV of this girl, and it was actually good, and this girl was more relatable and exciting than almost anything else we had, aside from Sassy magazine itself. Nelson writes novels “about teenagers and adults who act like teenagers.”

Kirk Read: Performer, event-maker, author of How I Learned to Snap, a memoir about being openly gay in a small Virginia high school, which I obviously have to read immediately, and the upcoming performance essay collection “This is the Thing.” Read has toured with the Sex Worker’s Art Show and is a founding member of the Gay Men’s Health Summit, which works to expand the notion of gay men’s health beyond AIDS.

You guys, I cannot even. Check the tour dates and locations. If you’re anywhere near one of these cities, do your future self a favor and be there when the revolutionaries come.