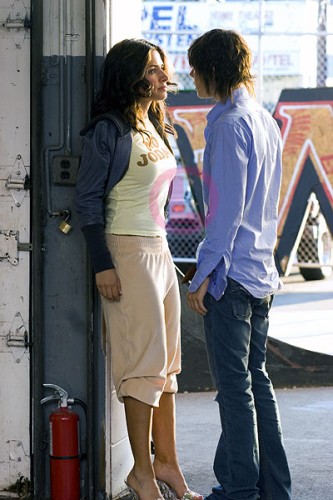 Bette: “First of all,
the NEA pulled the funding for the grant from my show this morning because we live in the most politically repressive political climate of the last 50 years,
secondly, Tina is so freaked out about money
that I’m actually thinking about taking that Citibank job
which just makes me want to kill myself.”

Dana: “Will it [acid] set me free?”
Shane: “It will give you the illusion that it sets you free, and that’s just as good.”

Social Worker: Let’s just hope she doesn’t have a lot of contact with the child.
Alice: Uh, I happen to be the earth mother. I would be the Godmother, but I don’t believe in God.
Social Worker: Of course you don’t.

Tim [to Becky]: “The next time we see Jenny, she might be with a German Shepard. Just brace yourself.” (Tim)

Carmen: “What are you gonna do, get drunk? It’s two o’clock in the afternoon.”
(pause)
Carmen: “You seem upset.”
Shane: “That’s you projecting, Carmen.”

Peggy Peabody: “Have you seduced many women in your life, Mr. Shepard?”
Lawyer: “That has no relevance to what’s going on here.”
Peggy: “Maybe, but If you want my opinion, I don’t think you have very much knowledge of the ways of seduction, what I saw was a rather moist sexual game, in the worst possible taste to be sure, but certainly not harassment.”

Jenny: “Oh I committed!
I became a self mutilator,
went on medication,
did a short stint in a psychiatric hospital,
spent six months with my parents in Skokie.
Everything that I know you would want to have happened to me.”

Tanya: “I was always a little jealous of you, Alice….because Dana loves you so much. It was actually kind of hard to deal with when we were together. Ultimately knowing that there was this other person who was so much more important than me.”

Kit Porter: “You know, it just saddens me to see so many of our strong butch girls giving up their womanhood to be a man. We’re losing our warriors, our greatest women. And I don’t want to lose you.”
Max Sweeny: “I’m not following some trend.”
Kit: “What if I lived my life feeling white inside and the next day I woke up and I could change the color of my skin, the features on my face to become white? Would you encourage me to do that?”
Max: “I don’t know, do you feel white inside?”
Kit: “What’s white inside? What’s male inside? What’s female inside. Why can’t you be the butchest butch in the world and keep your body?
Max: “Because I want to feel whole. I want the outside of me to match the inside of me.”
Kit: “You’ll be giving up the most precious thing in the world.”
Max: “What, my tits?”
Kit: “No, being a woman.”

Tina Kennard: “I only dated men before I met you.”
Bette Porter: “So what was I, some kind of eight and a half year aberration?”

Jenny Schecter: “I’m gonna dance with whoever the fuck I wanna dance with. I wasn’t sucking his cock, was I, Max?”

Shane McCutcheon [to Max, re: Jenny]: “Don’t hurt her, or I’ll fucking cut your tits off.”

Max: “I’m not okay, I can’t wait for years and years. I’m totally freaking out, I can’t be inside this body!”
Jenny: “And when you get the body you need, who’s gonna live inside of it? Is it gonna be that sweet, kind compassionate person that I met or is it gonna be this motherfucking MONSTER?”

Bette Porter: “Did you fuck him yet?”
Tina Kennard: “Did you fuck who?”
Bette: “Whoever it is that you have these feelings for.”
Tina: “No. I haven’t slept with anyone.”
Bette: “So he’s just this amorphous male figure comprised entirely of cyber-pollen?”

Bette Porter: “The only thing that I want more than you right now is for my girlfriend to want me as much as you do.”

Shane [in a party dress]: “I feel like a piñata.”
Carmen: “You’re too small to be a piñata, but how ’bout the top of a trannie wedding cake?”
Shane: “You’re not helping me.”

Angus [re: dating future lesbians]: “What can I say? I’m attracted to women that like to go down on other women.”

Roberta: “You haven’t exactly baby-proofed, have you?”
Bette: “Well, I don’t really believe in baby-proofing, per se, I mean, first of all, it’s ugly, and I really want Angelica to develop and intrinsic sense of beauty.”
Roberta: “Well, I can tell that’s important to you, Bette. presumably it’s why I don’t see an abundance of brightly colored, stimulating, interactive plastic toys strewn around the home.”
Bette (laughs): “Exactly.”
Tina: “I’ve done research on pool covers and fences and-the fences are really ugly, Bette hates them a lot.”
Bette: “Yeah, really a lot.”

Alice: [at Angie’s six month b-day party] “Who do you have to fuck to get a beer around here?”

Carmen’s Mom: “She’s so skinny! Don’t you feed her?”
Carmen: “No Mother, she feeds herself.”

Bette Porter: “Thank you for laying your
petty bourgeois anxiety
on top of my already profound anger and disappointment
over losing something
that means so much to me.”

Bette: “I love this aria.  Remember this?”
Alice: “Oh you mean our third date when you finger fucked me at the opera before telling me you didn’t think we were right for each other and that you’d just met a straight girl you thought you might fall in love with?  No, I don’t remember a thing.”

Bette Porter: “Senator, what do you think you’re doing?
Un-American?
Not as Un-American as what you just did. You ought to be ashamed of yourself.
You know what you are?
You’re just the latest reigning vigilante self-appointed culture watchdogs of the moment. Devoting countless hours and enviable resources to this bogus mission of stifling creative expression in the name of patriotism. And you know what it is, Senator? It’s a distraction.
It is a wanton distraction.
Because let’s just be honest and forthright about what is truly unpatriotic. Lies told by presidents as justification for war is unpatriotic.
The failure of our education system is unpatriotic. Abject poverty is unpatriotic.
It is unpatriotic that elected lawmakers fail to acknowledge, let alone address, real desperation.”

Alice: “I think you guys would be obsessed too, because our sex was mindblowingly unfuckingly unbelievable. And it just kind of you know, it makes you realize that this person could be the one great true love of your life. You know?
But she’ll be back.
She will be back. Because our love was too intense.
That’s all.”

Jenny: “You know what, nobody knows who they are.  You know? That’s what life is about, you walk through life and you try to figure it out and you probably won’t figure it out.”
Moira: “It seems like you know who you are.”
Jenny: “Absolutely. I am the picture of togetherness and sanity.”

Alice: “Maybe if we knew more about George W.’s weapon of mass destruction–you know, we could figure out how to blow him out of office?”

Shane: “What are you doing here?”
Cherie: “I have an appointment to get my hair cut. You don’t just do Mohawks, do you? ‘Cause I don’t think I’d look too good with a Mohawk.”
Shane: “Cherie … Peroni? That’s you?”
Cherie: “I went back to my maiden name. I wasn’t going to keep that fucker’s name, but I sure as hell kept a shitload of his money. Is this where you want me?”

Alice: “The world is your bisexual oyster, so shut up, okay?”

Carmen: “OK, we’re talking. Monogamy: it is a noun, and it is the tradition or practice of having a single mate during a period of time.”
Shane: “I get it, Carmen.”
Carmen: “Wait a minute, I just want to make sure that you and I both know what we’re talking about here.  Oh, listen to this, monogamy is common among birds.”
Shane: “That’s great, because I love birds.”
Carmen: “It is the practice of having a single mate during a period of time, does that mean anything to you?”
Shane: “I’m willing to try, is that not enough? I’m willing to try something that doesn’t come naturally to me and that I don’t understand but that I’m willing to try.”
Carmen: “Birds, Shane, I’m talking about a goddamn fucking bird.  I’m talking about asking you to be as civilized as a goddamn fucking bird.”

Jenny: “I would never suggest that anybody does that to themselves, but for me, in that moment, at that time,
it made me feel like I was alive and it made me feel like I had some control over my life and in that moment that was empowering–”
Editor: “That’s bullshit, Jenny–”
Jenny: It’s not bullshit because it’s what I did!
You can’t tell me—I’m sorry but you can’t tell me what’s bullshit!
Let me ask you something:
why are you working on my book?
Why?  You guys asked me to change it from fiction to memoir and that put me in a pretty vulnerable position and suddenly I’m too passive for you, I’m a victim, I’m not transformed enough, so you know what I think? I think–I don’t know–may I?
Thank you.
I think you should probably go find yourself another hero.
Fuck You.”

Josh: ” You’re way too hot for that. You’re soooo not a lesbian.”
Tina: “Are you really that clueless?  You have no idea who I am or how I feel!”
Josh: “I know that you didn’t feel like a lesbian just now.”
Tina: “This was gonna be so easy for you! I was so ready to jump into bed with you, now it turns out you’re an ignorant ass!  Why didn’t you just shut up and fuck me? Why did you make it impossible for me to do something that I wanted to do?”

Alice: “It was the best sex I’ve ever had in my life. I came like, nine thousand times. Did you hear that, Shane, nine thousand orgasms?”
Shane: “That’s fantastic, Alice.”