You wouldn’t assume that most black churches in Harlem have much in common with Lady Gaga. But Rivers at Rehoboth is a church that espouses the same thing the pop star does — that its gay and lesbian constituents are born that way, and more specifically born that way because it’s God’s will.

Rivers and Rehoboth is a ministry for gay Christians, led by lesbian pastor Vanessa M. Brown and a team of associate pastors. Many of its members come from other, less affirming religious communities — the New York Times mentions one couple, Julie and Stacey Chisolm-May, who used to attend church on Sunday separately because  they didn’t have somewhere that they could show up together without fearing repercussion. Rivers at Rehoboth has an average of 200 members attending each Sunday, and are looking to move into a larger space to accommodate more people. 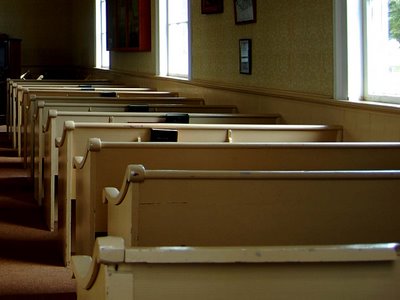 The relationship between homosexuality, religion, and the black community has been much discussed in the media, and not always productively — while exit polls initially placed much of the blame for Prop 8’s passage on California’s black voters, later analysis revealed that those reports were exaggerated. Myths that the black (and/or religious) community is uniformly homophobic also ignore the experience of people like Rivers and Rehoboth’s congregration, for whom a black and Christian identity coexists with same-sex relationships. People like Rivers at Rehoboth’s congregation often feel like outsiders in all of the communities they belong to, and for this reasons a space like an accepting church becomes especially important — it becomes one of the only places where the congregation can, as Pastor Brown says, “be their authentic selves.”

So far, 2012 has been a year for exploding long-held beliefs about perceptions of the gay community. While communities of color and religious communities have long been thought of as consistently anti-gay, this was the year that the NAACP and Barack Obama both supported marriage equality, and a new poll found that people of color are more likely to support marriage equality than whites. When a North Carolina Baptist minister advocating imprisoning gays and lesbians behind and electric fence, he had a few supporters, but he also had 1000 people protest against him.

The world that Rivers at Rehoboth exists in is a complex and multilayered one; more than just being more accepting of gay people than it has been in years past, which a number of polls have shown, it’s one in which there’s greater understanding of the many different ways in which we live different identities and belong to many different communities. Because of the strides we’ve made in terms of visibility — because many Americans not only know that gay people exist, but know that gay people are members of their PTA and their mountain biking club and their group therapy sessions — there’s a little more breathing room for our “authentic selves.” There’s still not nearly enough, as trans people getting fired from their jobs and the ongoing issue of bullying demonstrate, but for the membership at Rivers at Rehoboth, it seems like a big step in the right direction. And the more visibility and acceptance we gain, the more it creates in turn. Julie Chisolm-May, who says that if it weren’t for Rivers at Rehoboth she and her wife would likely be “worshiping from their bedroom, watching ministers preach on television,” now attends church with her entire family, including her six grown children and her newly-accepting 74-year-old mother.