I got together with Nightingale about a month after I arrived in the Bay Area for graduate school9. We met just after Folsom Street Fair10, hit it off extremely well, and sparks flew a few days later at my birthday gathering when I made out with her halfway through singing Garbage’s Queer at karaoke in El Rio.

Nightingale charmed me with an intensity that matched mine and her sincere enthusiasm for life. I was impressed by her brazen complimenting of people’s attire: our walks together are often peppered with “Nice shoes!” or “Great dress!”. She is the first person I’ve met who is able to out-talk me. Her immense love and knowledge of music11 has led to impromptu lessons about syncopation and her ability to quote a song lyric for any situation (as she calls it, “life indexed by soundbite”). Her ability to recognise systems and make connections makes her an excellent Production Manager, giving me the means to actualise my Artistic Director dreams into reality12. She is equally as passionate about social justice, especially around sex worker rights and trans* equality.

Nightingale’s sincere, passionate curiosity and her deep love for me was what led to me gaining a renewed interest for the Malaysia I thought I had left behind. 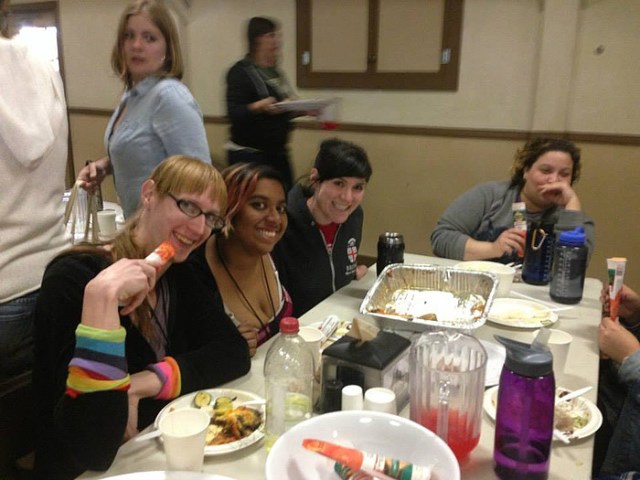 Nightingale and I at Autostraddle’s A-Camp, another adventure I took her out on. She had the time of her life. (photo by Maggie H)

Nightingale geeks out over languages — she has a fairly good command of French and Spanish in addition to English — and she was genuinely interested in learning more about Malay. Usually people don’t realise that the Malay language exists, let alone have any interest in learning any part of it, so Nightingale’s interest was a surprising and refreshing change. She quickly picked up on the numbering system (though she misses a digit or two sometimes), and random Manglish or Malay phrases have entered our joint language — from “I pukul you!”13 when someone’s being extra punny, to “sayang” as a pet name.

She also acquired a taste for Malaysian food. A love for food is practically baked into the DNA of most Malaysians; a recent survey of Malaysian students who are studying or have studied abroad14 showed that food was unanimously the thing they most missed about the country. While most foreigners do also appreciate Malaysian food, there are some parts that are a harder sell — such as the spice level, or durian. Nightingale eats spicier food than I do (in fact, I only started eating extra-spicy food in the US when I found myself pouring hot sauce on everything to make up for the lack of flavour), and not only does she willingly eat durian, she loves it. Even my parents can’t stand the taste! I had taken Malaysian food for granted, but Nightingale’s interest allowed me to really appreciate Malaysian food for its myriad flavours and its ability to be healthy, tasty, and affordable at once — try hitting one out of three in the US!

Sometimes the interest in food and the interest in language coincide. My explanation of kueh lapis and the existence of rainbow kueh lapis, filtered through a few injokes about ducks and the French language, led to her renaming the item “queer lapis”, with semi-joking plans about making these to sell at queer events.

A turning point for me came one afternoon while we were enjoying hot dogs at Berkeley. The topic of Malaysia’s National Service program came up, and I ranted about how young people in Malaysia were mistreated and how I hated the country for it and so on. Halfway through the rant I realised that I didn’t hate Malaysia: in fact I had a lot of love for the country. What I hated was the way its culture and its people were being erased and harmed by the People in Power: the clashes between races and religions, the scapegoating of youths and migrant labour, the slut-shaming and discrimination against gender and sexual minorities. There is so much beauty and spirit in Malaysia, in its food and languages and people — yet so much of it is disappearing,often without choice.

This growing appreciation for Malaysian culture ironically made me realise just how much of a misfit I was in the Bay Area. I often felt out of place at POC-centered places because they were working from a US-centric view of race politics, which I could not easily relate to. I walked into Eastwind Books, which stocked books by and for Asians, and found nothing about Malaysia. South Asian groups had Bengalis, sure, but they were more familiar with Bangladesh or India — not Malaysia. In a city that attracted me for its inclusive diversity, I still felt alone.

Nightingale’s support, love, and honest appreciation makes a huge difference. She listens to my stories with an open heart and sincere interest, never accusing me of “not being Malaysian enough”, while understanding the particular set of filters that define my experience. When my own peers struggle to understand me, she — as culturally different from me as you can get — accepts me wholeheartedly. She joins me in celebrating the discovery of the small shards of mirrors that reflect any part of my story: from connecting with Gloria Anzaldua’s description of mestiza,to Fikri’s story in Autostraddle of being a queer Singaporean of Muslim background. She cares about me and my culture, giving me the space to care about me and my culture too.

Interesting, that in the quest to find places that accepted the outsider parts of me, that it took another outsider to accept the parts I thought I couldn’t call mine.

I am somewhat concerned about Nightingale’s safety when she comes to Malaysia with me. On the one hand, her White privilege, the fact that she’ll be constantly be accompanied by me and others, and the likelihood that we’d stick to cosmopolitan areas affords some level of safety. On the other hand, I don’t know what it’s like to navigate Malaysia as a potentially visible queer couple, let alone as a trans* woman whose gender history may or may not be obvious.

I do know what it’s like to be constantly catcalled walking to and from work in Petaling Jaya. It’s not that dissimilar to being catcalled walking around 16th and Mission. Having company could make a lot of difference. It’s also possible that Nightingale’s gender and sexuality would be classified in Malaysia the same way mine are in the US or Australia: Foreign.

At the same time, there’s so much positive change happening in Malaysia that are supportive of the LGBTQ community. Trans* people are being appointed into political positions, community campaigns for trans* people and their allies are being built, and sexist and homophobic remarks are being called out openly in humorous ways. Resources such as Seksualiti Merdeka, the Malaysian AIDS Council, and the PT Foundation are still going strong. For every instance of bigotry there are plenty of people willing to challenge it and provide allyship to those affected.

Besides, there’s so much about Malaysia that I want to share with Nightingale, in her first trip outside the United States. The potential to meet my family and all my most important people in my life (including the best friend who I was in love with as a teenager and my Australian matey who’s also thinking of coming over). The waterfalls and beaches that were equidistant to the house I lived in in my teens. The fashion that’s more likely to fit her frame than mine. The music of my country — whether dangdut or Bollywood, full of the syncopation that makes her dance. More Manglish phrases, more pet names, more injokes. A history that I tried to avoid but know is intrinstic to who I am.

And of course, the food.

The grin on her sweat-soaked face, red from the heat of the curry she wolfed down. Such a beautiful sight to behold. 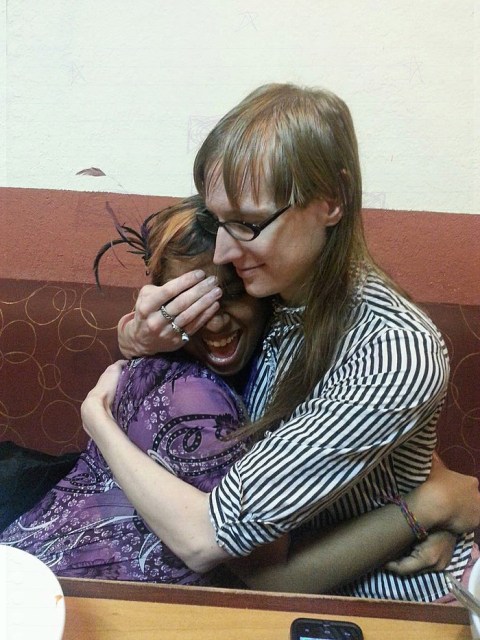 Nightingale and I; she’s the taller blonde on the right holding me close

I am raising funds and collecting resources to pay for Nightingale’s flight to Malaysia this Christmas. Please contribute and spread the word — every little bit helps!

1 Rendang: a type of beef curry popular in Malaysia and Indonesia, made by stewing the meat in coconut milk and spices for a considerable amount of time.

4 Most of Malaysian bureaucracy separates people into Malay/Chinese/Indian, with Other sometimes tacked on as an afterthought. In many places, particularly Government-funded areas, Malays get either exclusive or special rights. Look up Ketuanan Melayu (Malay Supremacy), hardcoded into the Malaysian Constitution, to see the context behind Malaysia’s racial quotas.

5 From a blog post made when I was seventeen, talking about the things that fascinate me: “The dynamic “force” in female-female relationships (I’m not gay, but the connection between two girls fascinate me endlessly)”. TIARA. SERIOUSLY, TIARA.

6 I was there to pursue a Bachelors degree in Creative Industries, but really I picked that city because my idol Darren Hayes is from there. Recently I participate in a project with the Queensland Museum about personal collections and contributed my Darren Hayes and Savage Garden collection. Go check it out when you’re in town!

7 We are no longer a couple, but we are still close best friends. I consider him my matey and my platonic life partner.

8 Formerly an artist warehouse and working space in the Mission. Seems to be closed now though!

9 Official reason: MFA. Real reason: to be in the Bay Area longer than three months.

12 Creative Industries class in Brisbane, 2007: “The Artistic Director goes ‘For this year’s festival I want BLUE DIAMONDS ON TRAMPOLINES!’. The Production Manager has to figure out how to do this under budget.” Soon after I told Nightingale this she talked about making this happen through tarps and school gym equipment. I waited 5 years for her!

13 “I pukul you!”: “I slap you!”, usually said in affectionate teasing when the other party is being silly. “sayang”: love/sweetheart

14 I participated in the survey but I can’t seem to find the specific results now; it was from a couple of years back.

Creatrix Tiara considers herself a platypus: made up of parts that shouldn’t go together, but do, and (unlike unicorns) actually exist even when no one believes they do. She’s actively exploring liminality and intersectionality in art and activism, particularly around being a queer gender-WTF femme(ish) migrant minority. Say hello at creatrixtiara [dot] com.