Beads of sweat drip down my girlfriend Nightingale’s bright red cheeks as she devours the chicken curry and rendang1 from Jayakarta Restaurant in Berkeley, our regular hangout when I am feeling homesick. She opted for Spice Level 4: supposedly “pepper-spray”-like for Americans, but tolerable for Indonesians — and her, a White American queer trans* woman who has never left the country.

Her huge grin sparks similar delight in me, giddy with anticipation over how much wider her smile would be (and how much sweatier and redder her face will become) when she tries cili padi2 and sambal3 and all the Spice Level 5-and-up things in our Christmas trip back home to Malaysia.

A country I never thought I’d ever want to return to, let alone eagerly bring a lover to show off as home.

Malaysia seems like an odd choice of place to bring your queer trans* girlfriend along for a visit. The Malaysian authorities have always been antagonistic to LGBTQ people, and their efforts have ramped up in the last year. Schools are receiving guidelines on spotting and curbing homosexual behaviour in children while playing host to a state-sponsored play that paints LGBTQ people as hedonistic predatory deviants. “Effeminate boys” are being sent to re-education camps, trans women are frequently targeted by law enforcement, and the closest thing to Pride in Malaysia is now banned. Of course, it’s all part of a foreign-led conspiracy to divide and attack Muslims.

Homophobia and transphobia aren’t exclusive to the Government. Trans women are attacked while walking down the street. Slurs such as “bapok” or “pengkid” are common. International ex-gay organisation Exodus International has a branch in Malaysia. Having hardly any representation of LGBTQ people — let alone positive ones —combined with strong cultural messages of not rocking the boat or rousing rabble means treating anyone potentially fitting the stereotypes as defective, deviant, dangerous.

To be honest, though, I never really had to deal with violence or bigotry over my sexual orientation or gender presentation. Rather, as a child of Bangladeshi migrants, my racial identity became my main battleground. For most of my life I had to deal with institutionalized and societal racism against Bangladeshis, commonly shunted into the “Other” category in racial quotas4 (if they’re ever counted at all) and decried by the Government, the media, and society as being untrustworthy criminals.

School teachers constantly interrogated me about news reports of Bangladeshis committing crime, and often threatened me with expulsion claiming I did not have the right papers — even though I was legally required to attend public school.

“Go back to your country!” and “speak the national language!” were common refrains.

“Bangla”,a word meant to refer to a language that sparked a revolution, now became a slur.

Even the supposedly more progressive Opposition coalition and their supporters were no allies to me — Bangladeshis were again scapegoated for allowing the ruling party to regain power via ‘phantom voting‘, and calling out my peers on this behaviour led to me being told that I was too “emotional” and that there were “more important priorities” than not throwing entire races under the bus in the quest for political reform.

Yet in Bangladesh I felt similarly alienated and disconnected. Being born and raised outside Bangladesh meant having few opportunities to be immersed in and appreciate Bangladeshi culture. I can’t read Bengali and I speak like a five-year-old. My relatives consider me the “interesting” oddity. When one of my cousins married a French man she met living in England, I was placed in the ‘foreigner’ contingent with the French family and English friends who came to Dhaka for the reception. Dhaka, with the overwhelming chaos and noise and dust, is the only city that makes me consistently homesick. 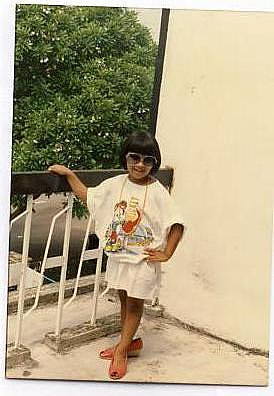 Me being fabulous as a kid, before things became painful and horrendous.

Malaysian culture is what I’m most familiar with,from the food to the fluent command of Manglish.Bangladeshi culture is where I am meant to find affinity,with a large extended family centered in Dhaka and histories of culture being key to independence and national pride. Yet in both places I have to view everything through the filter of the Other: expected to assimilate, but never fully welcome.

As it is, my personal interests and beliefs — from my ambitions to fully pursue the arts, to my radical-leaning left wing political activism — were deviating from the norms of both Malaysia and Bangladesh. I was becoming too Westernised, too non-conformist, too queer.

People talk about motherlands; I felt like I am someone born of a surrogate mother(land), who has estranged herself from her biological and surrogate mothers, and is now trawling the world looking for someone to adopt her.

So I left Malaysia,and sought to find home.

So much time and energy was spent dealing with racist backlash that I had no space to think about my gender and sexuality. My burgeoning feminism was more of a reaction against the gendered expectations of society: I didn’t want makeup or skirts or any sort of femininity markers whatsoever, and decried typical feminine pursuits such as fashion or sewing in a holier-than-thou matter.5

My knowledge of sex was perhaps slightly better than the average young Malaysian, given our abysmal lack of sex ed and the national attitude of studies being our only priority — over hobbies or relationships or life in general. However, paranoia over being the 0.000001% that gets STI-riddled babies despite using ALL THE PROTECTION and denial over being in love with one of my best friends meant that I identified largely as asexual: sex seemed like way too much of a messy hassle.

My first stop, Brisbane, Australia6, gave me the space and opportunity to explore my gender and sexuality without feeling like I had to risk arrest or deportation. I was in a loving relationship7 and found sex to be enjoyable (and my paranoia largely unfounded). My feminist politics grew more nuanced, being more inclusive of the “feminine pursuits” I once derided, and I even began to accept and nurture my femme side. When we opened our relationship (a great decision for many reasons), I was able to explore my interest in women,which led to a total reevaluation of my sexual identity. 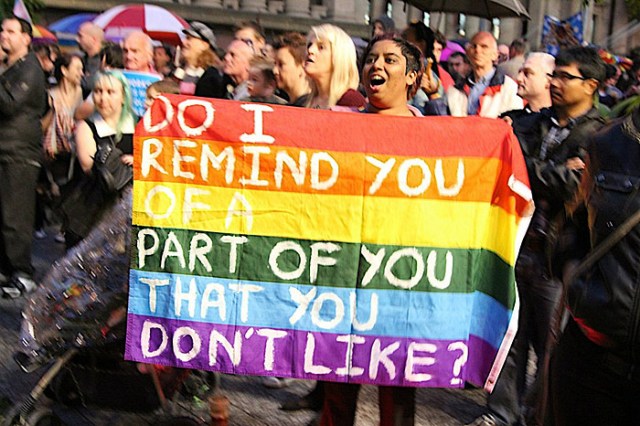 me at a protest against the defunding of Healthy Communities, an LGBTQ-centric organisation I volunteered with for a few years. the lines on my flag are from Darren Hayes’s Unlovable. (photo by Queensland Pride)

Then things started to fall apart. I was being ostracised in the burlesque scene for being too vocal about its white-washing and constant cultural appropriation. Even the queer and activist communities were White-centric: I recall being the only non-White person at a meeting organised by radical activists meant to organise a protest against a White supremacist event. I was sexually assaulted and went through a traumatic breakdown of a relationship that had barely even started. Election season stirred up a lot of anti-migrant sentiment thanks to the rhetoric of “stopping the boats”.

Once again, I was alienated. Once again, everything became filtered through the lens of the Other.

I spent the summer of 2011 in San Francisco via an artist residency at CELLspace8 to nurse my heartbreak and alienation, and also because so many of my artistic inspirations were either based in the Bay Area or had spent significant time there. I quickly saw why: it seemed that every identity intersection had some sort of representation, activist community, or artistic presence. From queer artists of colour working with disability, to feminist fat activists, to community centers for culture and sexuality.

The people there quickly took me in as one of their own. I went on an ecosex workshop in the woods with Annie Sprinkle and Beth Stephens, and was rescued by Carol Queen and her partner Robert (whom I was interning for) after a bad pot incident at Dyke March. I performed at the Femmes of Color Symposium and at Oakland Pride. I befriended a ton of people and got laid, a lot. I felt appreciated, affirmed, accepted for the very things that got me pushed out from Brisbane — being a loudmouth rabble-rousing weirdo. Three months was not nearly enough, and I vowed to return.

I knew it was time to move on when hardly anyone noticed I had returned to Brisbane yet people in San Francisco were asking me to come back.