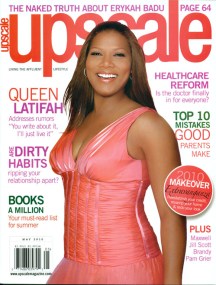 Upscale Magazine had the balls to directly ask Queen Latifah why she hasn’t come out:

You’ve been asked so much about your sexuality. Wouldn’t it be easier at this point to just speak on it-once-and be done with it?

But isn’t that a part of being a celebrity, letting people into your personal life?

[Brings up Jennifer Aniston dodging constant references to Brad/Angelina] That’s a tough situation to be in. My situation is small compared to that. But still, I don’t feel like I need to explain. I’m the one living it. You write about it. You go ahead and speculate. I’ll just live it.

Do you feel like you’re understood by the people closest to you?

Absolutely. I don’t feel like I need to explain things to a perfect stranger. The people who matter know. And they love me for Dana. I don’t have to tell Joe Blow. Joe, you worry about who YOU sleeping with.

But it’s not really just about that, is it? Because we’re fighting for equal rights, and there are kids who want role models who hate themselves and you could really join us in changing the world? No? Okay. That’s fine, we actually love Queen Latifah w/r/t all things EXCEPT THIS ONE ‘LIL THING. Also remember when Queen Latifah Hosted All-Woman Party With Lady ‘Dancers and went out to lesbian bars? That was neat. C’mon. It’d just be really nice to have her on our team.

Look at how cute you would be winning an Autostraddle Icon Award for Cutest Couple.

Our boyfriend appeared on the UK Justin Lee Collins show for an in depth interview where he talked about loving androgyny, how he fends off both male and female propositions from random audience members, middle America’s reaction to his album cover (they seemed turned off by his general fondness of eye makeup and interpreted it as strange, girly, etc). He says: “Yeah! I know! It’s not like I looked in the mirror and was like – I don’t know if I look masculine enough.”

When a young boy in the audience asked for a kiss, Adam looked embarrassed and told him, “I’m very flattered but I have to pass. I’ll probably have an off-screen gay kiss later. I’m not a whore!”

Check out her cover of Britney’s “Toxic” at Bonnaroo this weekend.  Then venture over to our Bonnaroo extravaganza recap.

Elisabeth Hasselbeck totally confronts Kathy G. about trash-talking The View ladies in her act and then appearing on the show. It’s a pretty terrible/AWESOME moment reveling in awkwardness. Loves!

Hasselbeck: You’ve said things about people here that are (a) untrue and (b) not so funny, so do you ever feel weird coming here and sitting here promoting things?

Behar: This party’s getting ugly…

Griffin: Actually, this moment is what I live for. So bring it.

Also, on My Life on the D-List, we finally got to see the lesbian kiss censored out of the Law & Order episode Kathy Griffin guest-starred in. You can watch the video here.

WE HAVE TO STOP NOW:

Did you miss season 1 of Cathy DeBuono & Jill Bennett’s web-series, We Have To Stop Now?  Guess what – it will be released on DVD this summer and is available for pre-order and on Netflix. The subscription-based season 2 is currently airing on wehavetostopnow.tv,  but they threw this little bone to ya’ll… Check out this great brand new season 2 episode of the show, right here for free!

Hot in Cleveland starring Betty White, Valerie Bertinelli, Wendie Malick and Jane Leeves premieres this week on TVLand and people are bitching that Betty White was airbrushed in an ad for the show. Also, our very own Liz Feldman writes for this show, so check it out. (@jezebel)

The Soup tackles a bicurious date from Downtown Girls: “Over on the reality show Downtown Girls, Victoria, who is straight, decides she wants to try dating women because the producers of the show told her to. So  Shallon sets her up with a bi-curious friend of hers and, as you can imagine, things get a little awkward. Keep your eye on Victoria as she goes to say goodbye…” (@e!)

Several female rock groups have taken up the sex-positive mantel formerly held by riot grrls, distributing zines on female sexuality at their shows. Does this mark a brave new way of approaching sex education? (@ontheissues)