Hello, and welcome to everyone’s favorite show about a woman named Alison trying to find out what happened to a dead woman named Beth! 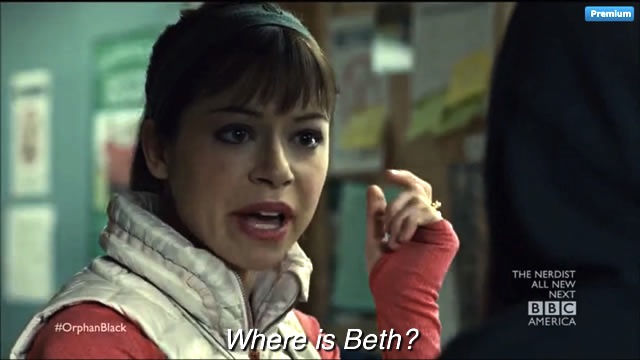 NOPE, THE OTHER ONE. 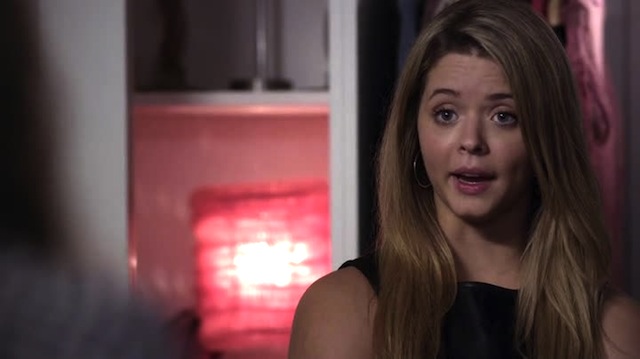 That’s the one! Away we go!

When we last left the liars, Ali had just revealed that she used Noel Kahn to fake a break-in so Hanna’s mom wouldn’t question her story! Wow, what an interesting and horrifying choice, Ali! Spencer, Hanna and Emily have fucking finally come around to the idea that their loyalty to Ali actually hasn’t excepted them form her lies and manipulation, which is amazing because this is season five. 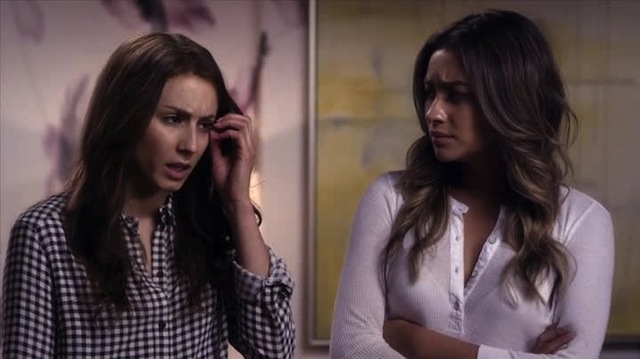 Flames, on the side of my face, breathing-breathl- heaving breaths.

But before they have a chance to play the “What Kind Of Friend Does That” card, Ali plays the “Spencer Was Spying On Me, You’re All Terrible Friends” card.

“Yo, didn’t you just admit to lying to us? Spying seems like a reasonable response to that,” Spencer says. JUST KIDDING NO ONE SAYS ANYTHING BECAUSE NO ONE EVER ARGUES WITH ALI FOR SOME REASON. 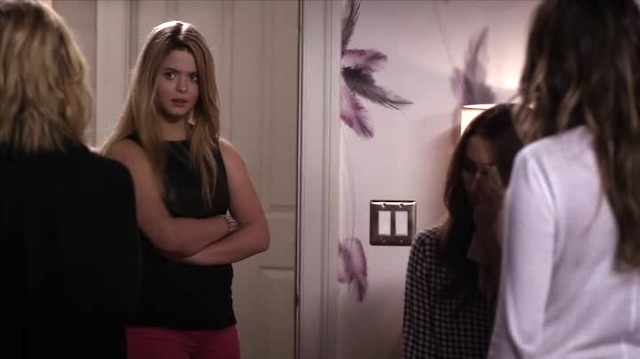 Well if we’re not going to take our tops off, I’m going home.

So Ali leaves, Spencer defends Melissa because she feels a lot of family feelings right now, Hanna drinks and laments Ali staying in her house, and Emily makes a bunch of comments that are too pointed, and we all have a gay old time! 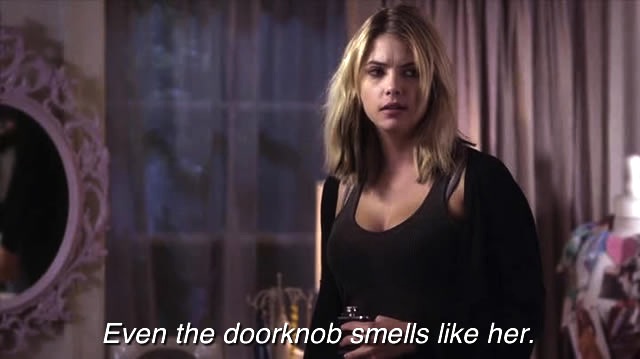 The unfortunate side effect of door play

Later, somewhere on the mean and unforgiving streets of Rosewood, Emily is riding her bike on the sidewalk and proceeds to lock it to nothing like she’s a white person in an infomercial. She hears Ali’s voice, but lo and behold, it’s Noel Kahn having a private listening party to recordings of Ali in the middle of the street with his windows down in the middle of the night. 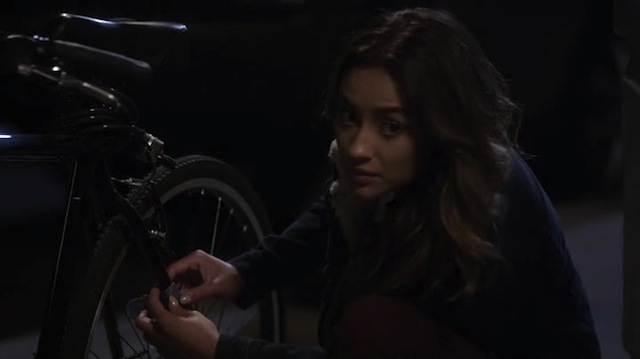 What am I adjusting on my bike? I don’t even know. I bet Paige would know. I miss Paige.

It’s too dangerous, and I’m not taking anymore chances ok. Shana, please. Don’t fight me on this.

“A CLUE, A CLUE!” the studio audience says. 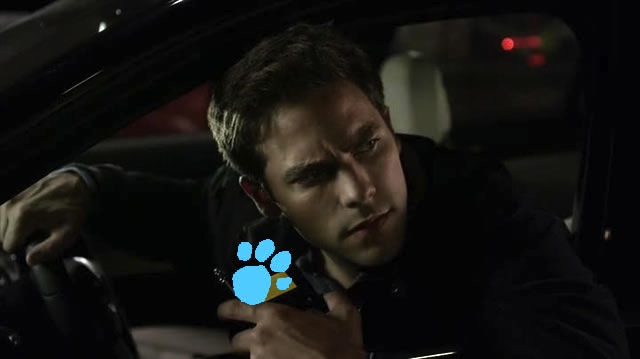 We just figured out Blues Clues

The next morning, Hanna is getting ready for what I’m sure is her 500th day of senior year while Alison takes a shower. Her mom comes in and suggests that the three of them go shopping after school for BIG ENGAGEMENT PARTY stuff. (You may remember this engagement as the one between Aria’s mom and Zack, the dude who wants to hook up with Hanna and this party as the one A is totally going to ruin.) 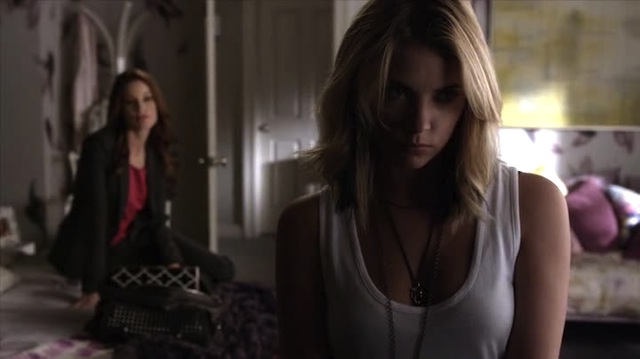 Hanna’s like LOL NOPE re: the party, so her mom is predictably frustrated, but don’t worry, her frustration quickly melts into righteous parental rage when she finds Hanna’s flask. She warns Hanna that she needs to stay in control as long as Ali’s kidnapper is still on the loose, and Hanna’s eyeballs roll right out of her head. 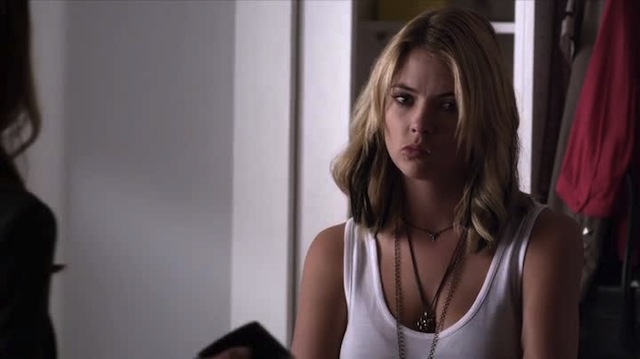 Oh man, did I forget to take my toys out of the dishwasher?

In another dimension, Aria and her mom are being questioned by Lieutenant Tanner about the break-in at Hanna’s house. Tanner asks when Aria met Ezra, and she lies and says on the first day of school, so Pull-No-Punches Tanner follows up with “but you guys boinked on the reg, yeah?” and then goes on to suggest that it’s possible Ezra was also involved with Shana, which: HA, but also who even knows, at this point. Aria looks like Tanner just took the last blue Fla-Vor-Ice so now she has to have orange. 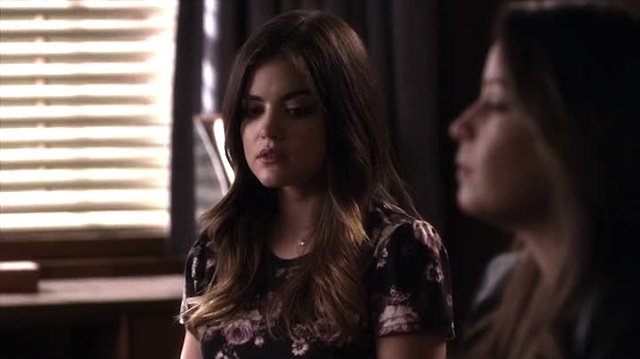 I just wanted a blue tongue so I could make jokes about eating out Smurfette.

After the interrogation, Aria’s mom is like, “listen, I know you’re the Belle to Ezra’s Beast, but Tanner is just doing her job, sooooooooo,” but Aria jams her fingers in her ears and sashays away. 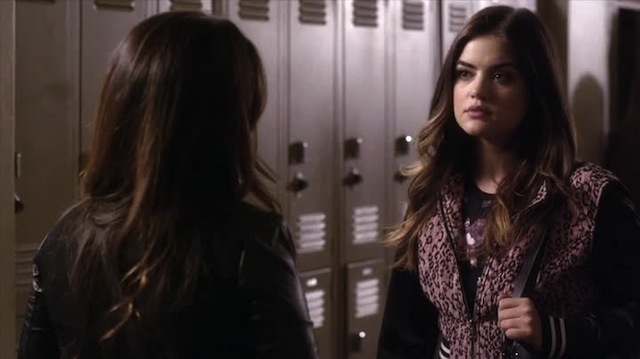 I hope this scene goes on for another minute, I just really found my Dawson’s Creek light.

Ali catches up with Spencer in the hallways and reminds her that the show is called Pretty Little LIARS so she has to LIE when Tanner inevitably questions her. She goes on to say that “If one of us falls, we all fall, and A wins.” This doesn’t seem strictly true, but I am willing to buy into it so the rest of the show makes sense. Anyway, Ali is pissed at everyone, I don’t know, everyone on this show needs to drink some tea and watch an episode of Bob’s Burgers or something. 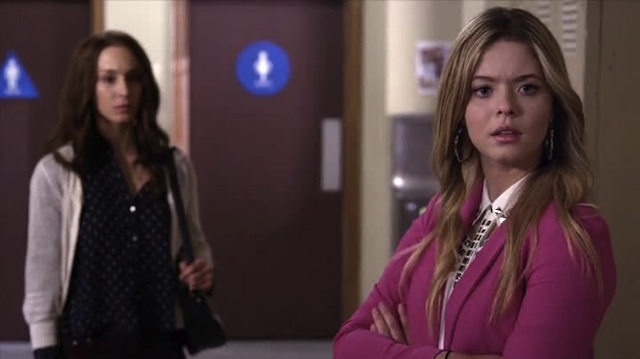 You might think it upset me that Paul Metzler had decided to run against me, but nothing could be further from the truth. He was no competition for me, it was like apples and oranges.

The we Boot Scootin’ Boogie over to the swim coach’s office where our dear homosexual Emily is interviewing for a position as assistant coach. A couple snappy lines of dialog later, and she’s got the job! She responds to this by immediately looking in a confidential binder of locker assignments to find Noel Kahn’s locker because who has even one second to waste before abusing their position of authority, I mean really. 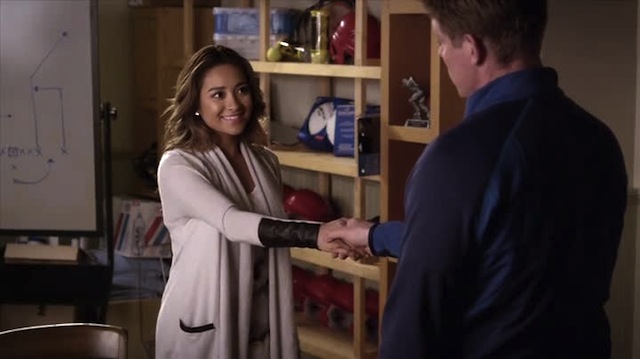 These ARE replica Xena wrist guards, thanks for noticing!

Emily The Professional later breaks into Noel’s locker and steals his keys! 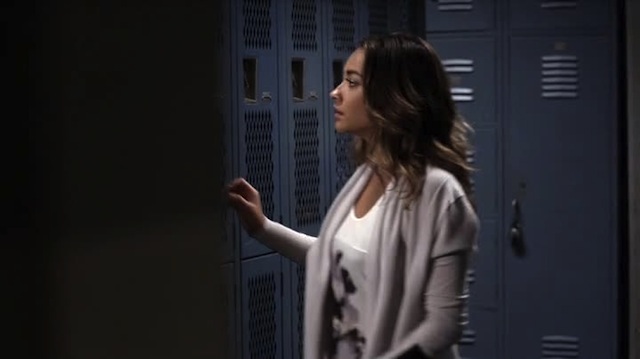 Then we dig our pogo sticks out of the back of our closets and hop on over to Caleb’s apartment, where Spencer is having a Real Talking with him about feeding into Hanna’s self-destructive patterns. More importantly, we learn than Hanna hasn’t told Caleb about Zack, so right now Hanna’s storyline involves a lot of people talking at and about her but no one really listening to what she has to say. 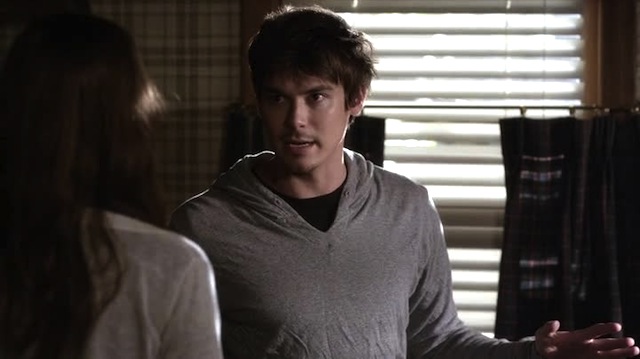 You know I can only sing the Joanne part 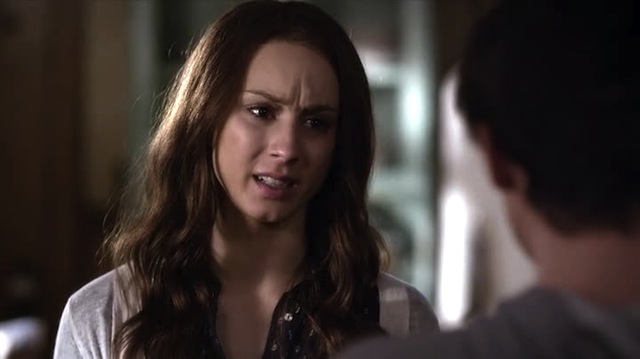 You know you’re the more Maureen out of the two of us.

Back in the choir room (#continuity from the last episodes), Alison and Hanna are celebrating their one millionth conversation about how their group is falling apart. Hanna tells Ali that her stunts affect other people, which really does seem to be something Ali doesn’t realize or care about, but since this is national No One Listens To Hanna Day, Ali patly ignores it. Hanna tells Ali to stay with one of the other girls because U-Hauling makes her uncomfortable. 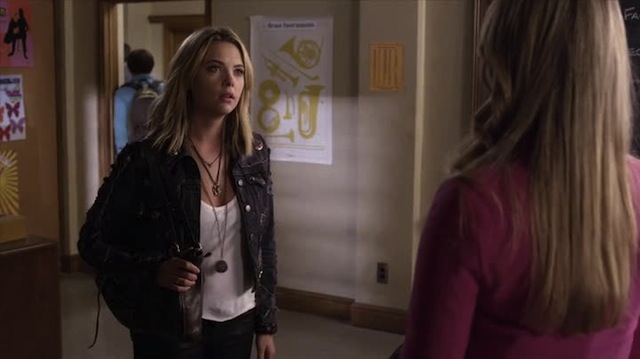 Seeing the faces of the Final Five

Just then, like a shooting star, Jenna appears to make our queer dreams come true! Typical passive-aggressive conversation happens for a while, and then: 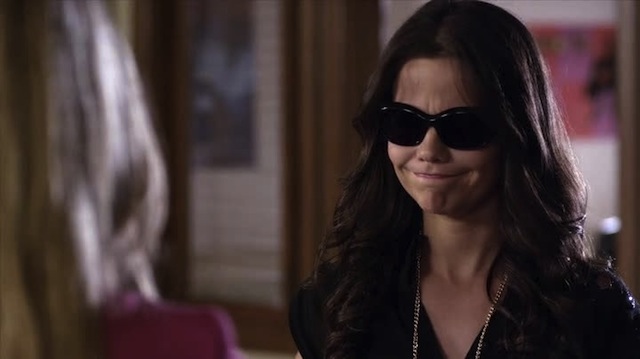 Dear reader, I have to tell you, there was a full beat where I thought Ali was asking Jenna how lesbians have sex. But no, Alison just wants to know how Jenna “turned Shana against (her).” Boooooo. The answer is “we were DATING,” but Jenna says it was Ali’s fault Shana hated her, which is probably also true but avoids queer subtext, so WHATEVER, SCRIPTWRITERS. 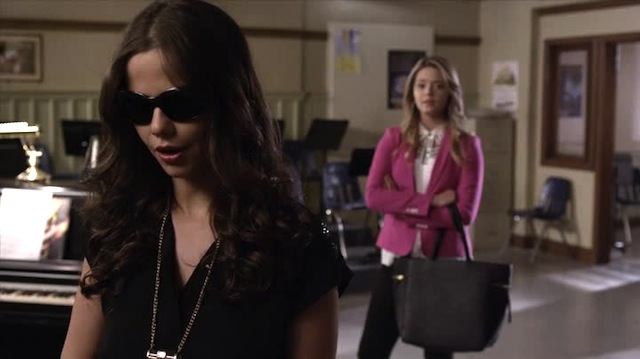 Stop looking at my ass!

Time for an indie song montage! Aria texts Ezra that Tanner is asking questions about Shana and then pointedly doesn’t let Hanna sit with her. I don’t understand. If any of these people were actually friends, I feel like at some point one of them would say to Hanna “listen, clearly you’re going through a lot right now, do you want to get coffee and talk about how you’re feeling? What can I do to help you?” I mean really. This is crazy. These people are the worst. 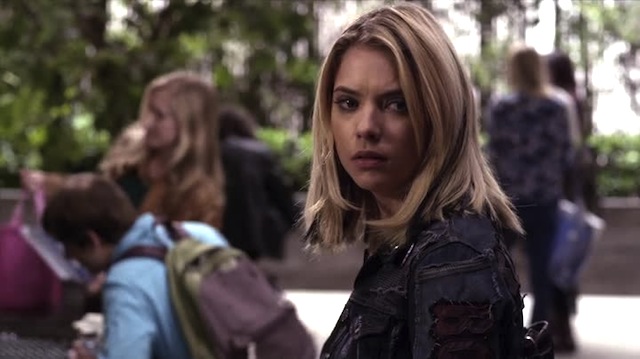 Whatever, at least I have this sick jacket

Elsewhere in the indie song, Spencer is at the eye doctor getting her eyes dilated. Through a blurry haze, she sees Jenna and Sydney in matching cosplay of the twins from The Shining. She tries to take a picture, but it’s rude to take pictures of cosplayers without asking, so the twins leave before she has a chance to. 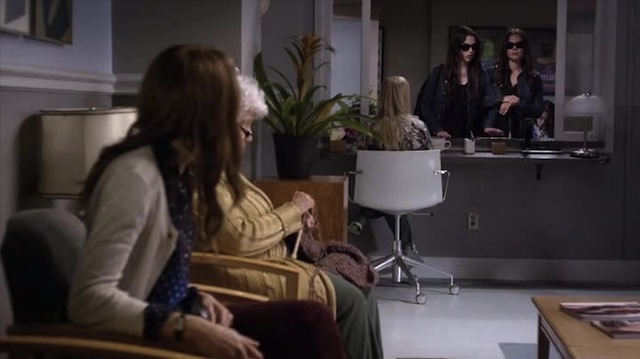 Prepare for trouble! Make it double!

The indie song fades away as Emily breaks into Noel’s car. She finds an envelop of stalker pictures of Alison that would disprove the kidnapping and also the tape recorder that she presumably heard last night. Why did he keep this stuff in his car? That’s the real mystery here, Emily. 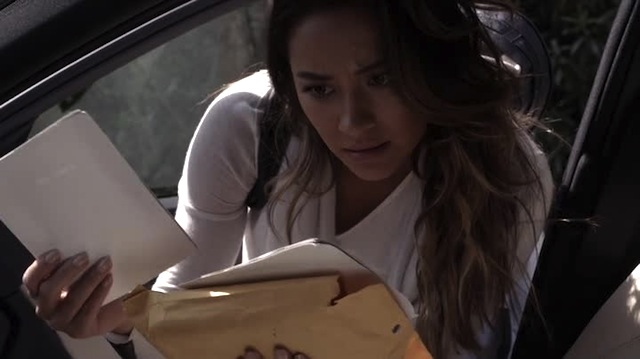 This mudwrestling photoshop is hot, but I wish they’d spent more time on Paige

Spencer calls Em to tell her about the “two Jennas,” and Em tells Spencer about the pictures. Spencer gets a note from A in the form of an eye chart and continues to be surprised when shit like this happens. 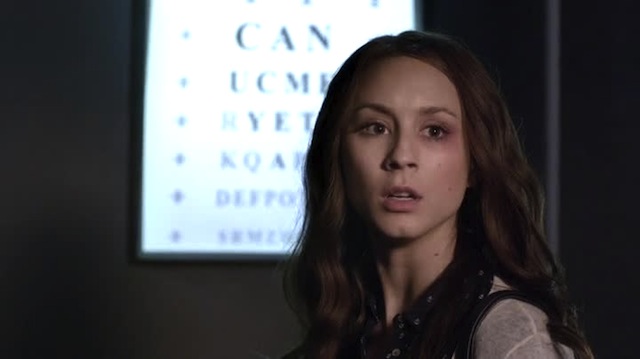 We’re almost halfway through the episode, which means we’re long overdue for a scene with a dude who’s into underage girls! Aria returns home and tells Zack that Hanna isn’t coming to the BIG ENGAGEMENT PARTY because she isn’t feeling well, but Zack plays it cool and seems only passively interested. Ugh, I hate him so much. 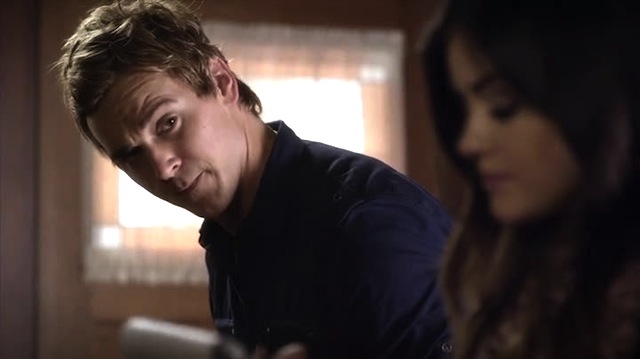 Sit on a cactus, you off-brand Jason Stackhouse

Meanwhile at the cosplaying optometrist, Spencer is back in the waiting room wearing Daft Punk sunglasses. 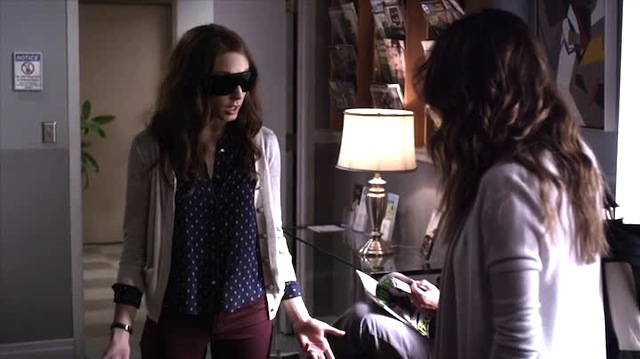 What do you mean you’ve never seen Tron?

Emily shows up to be the other Daft Punk dude, but before they can make it through even one chorus of “Get Lucky,” Sydney and Jenna pop into the waiting room! Ahh! 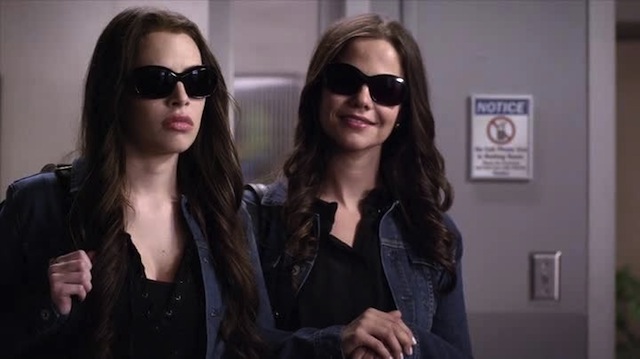 Let’s get together, yeah yeah yeah

Emily whips off her sunglasses in the most Jurassic Park way imaginable so she can better interrogate Syd on her secret friendship with Jenna. Jenna keeps talking over Sydney, which prompts what will surely be the best line of the episode: 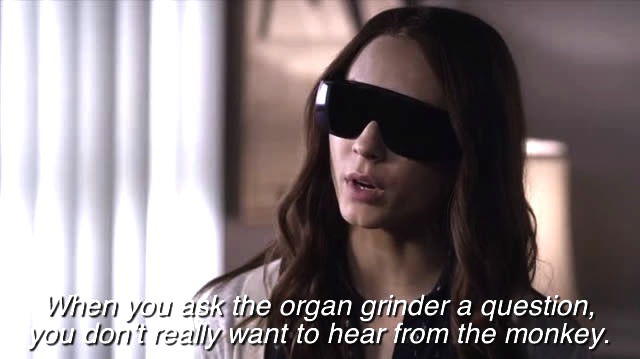 And then whoooooosh, the terrible twosome is gone. No one asked them about their matching outfits, though, which seems like an oversight.