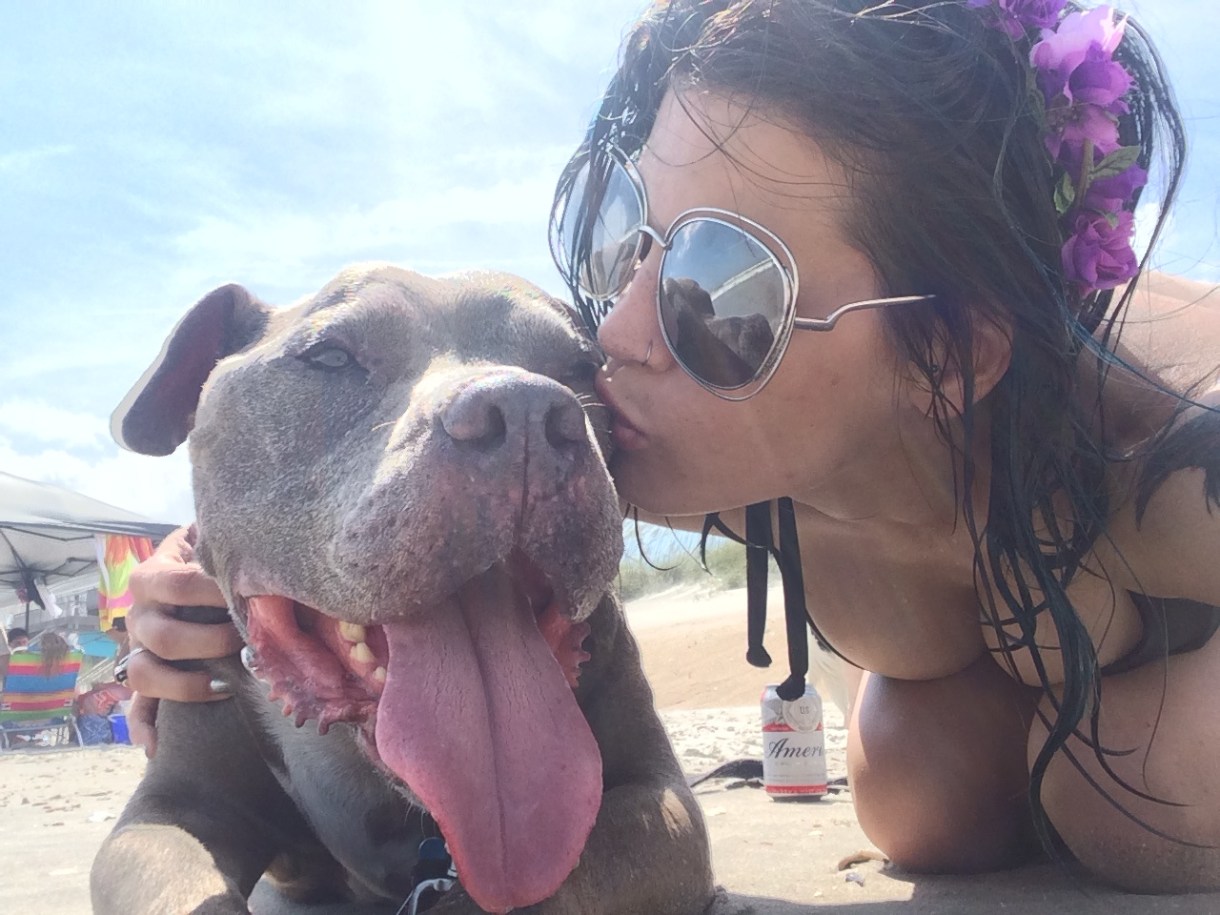 “I was fostering animals in 2010 with my partner at the time from the county shelter I was working at, and Banner Snug was one of our fosters. He was picked up off the streets near Raleigh, NC and was a pathetic gargoyle covered in fleas, heartworm positive, and 20 lbs underweight. He actually got adopted by someone else, and I cried for daaays. But a month later, it ended up not working out, and he came back to me and his forever home.

My partner named him after Bruce Banner. But he’s my snug baby and an Emotional Support Animal for my PTSD  who is very good at his job so I usually call him Snug. The best thing about him is his ability to make anyone fall in love with him, and his ability to heal through the power of snuggin. He didn’t choose the snug life, the snug life chose him. He likes to watch me make dinner – he’s a great assistant for taste testing. We usually watch wrestling together and snug on the couch. I think that might be his favorite. The weirdest thing about him is he is terrified of water. Unless it’s snow or ice cubes, he’s  out.” 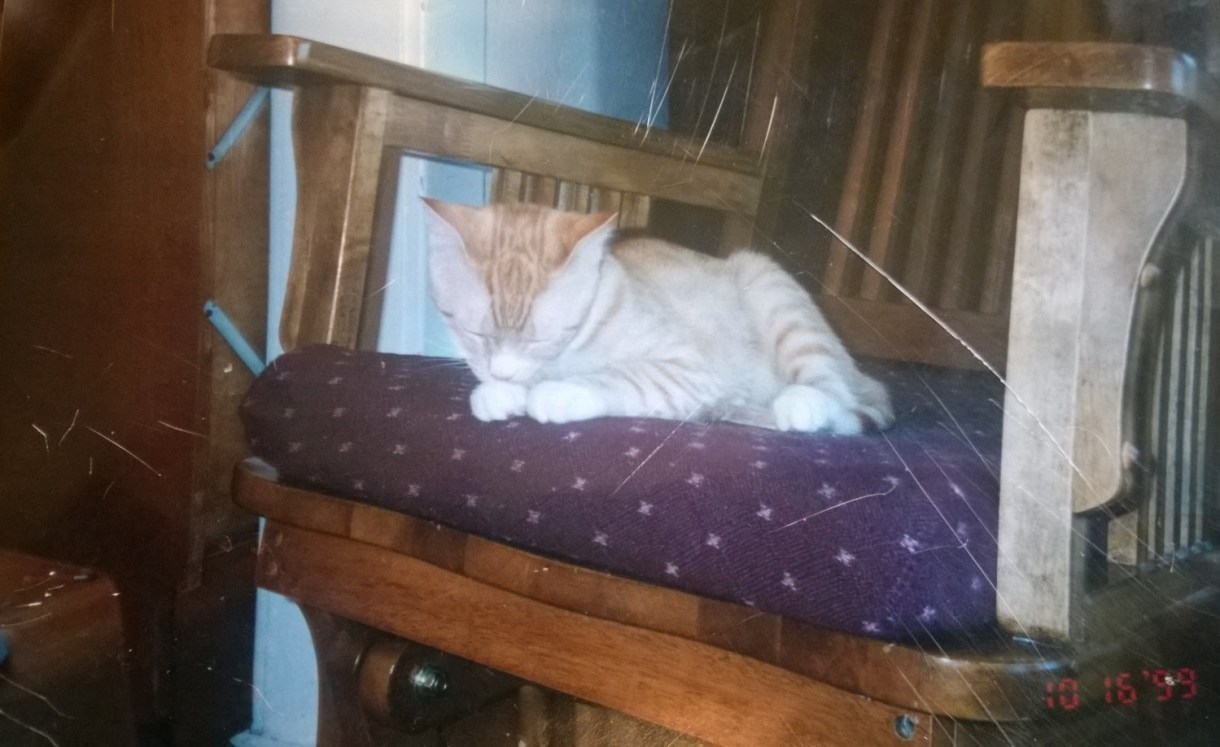 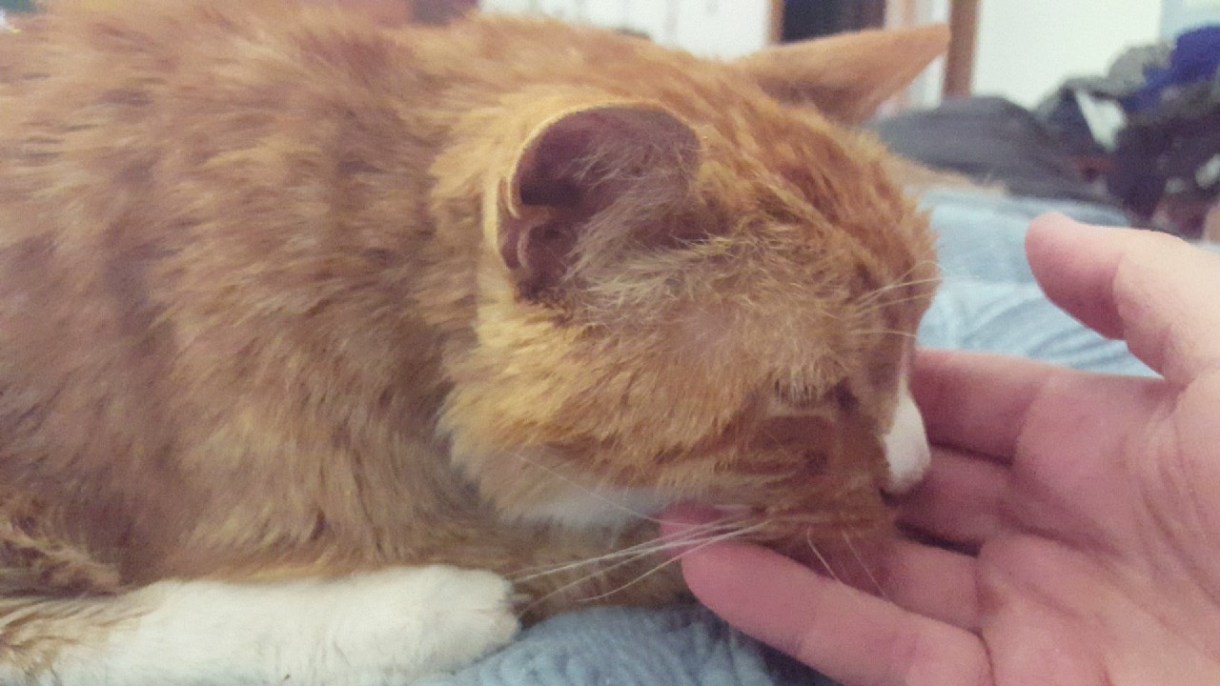 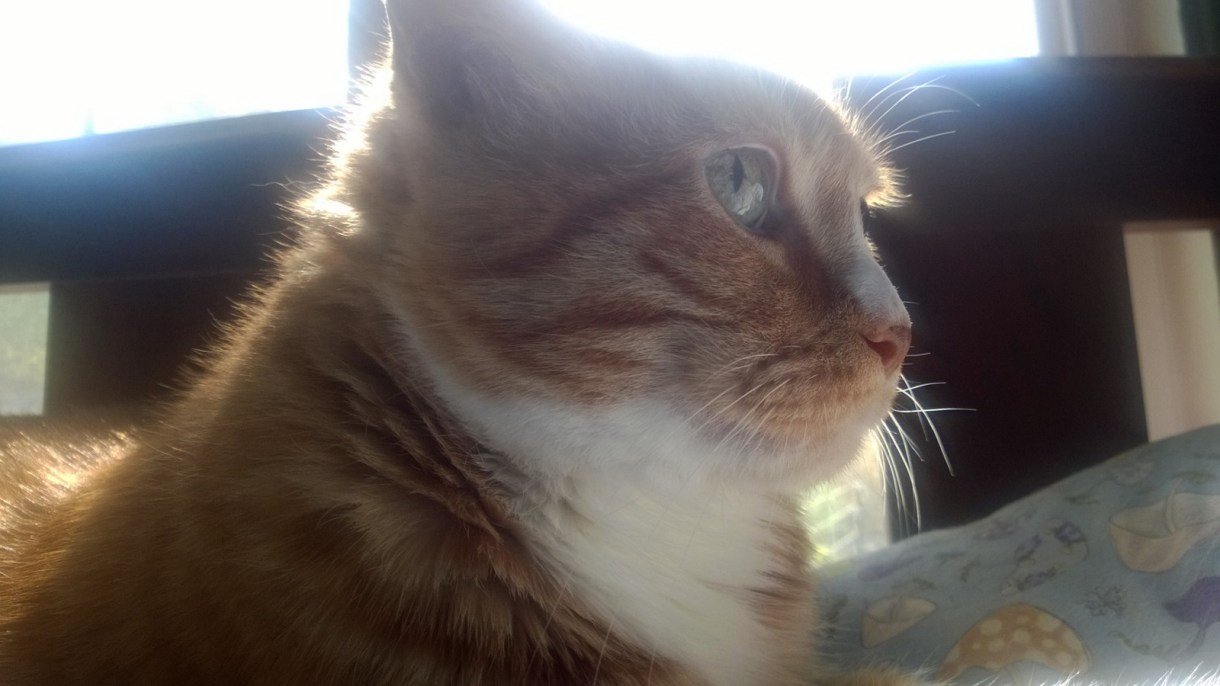 “Zaboo and I chose each other when I was four and my mom took me to the humane society to adopt a cat. He was the first one I looked at and that was enough for me. I fell in love and felt a connection. But my mom made me walk around and look at all the others while I just wanted to go back to him. I had already decided on Zaboo as a name (based on the PBS show Zoboomafoo) and it fit him so well! He was a soulmate, a weirdo that comforted me and reminded me to laugh and play a bit every day. He was ready to play with anything anytime, he was young at heart forever, and would even sleep with his toys. Two years ago for Christmas, we gave him a small stocking of cat toys and he played with each one thoroughly before taking it to a special place to keep safe and returning to find the next new treasure. We grew up together and it hasn’t been very long without him and I miss him immensely. When he was a kitten, he had a thing about sleeping around my head at night but his purr was always so loud and he snored which would keep me awake. I would give anything now to hear and feel his purr one more night. Make a couple extra moments of joy with your lovely animal friends this week.” 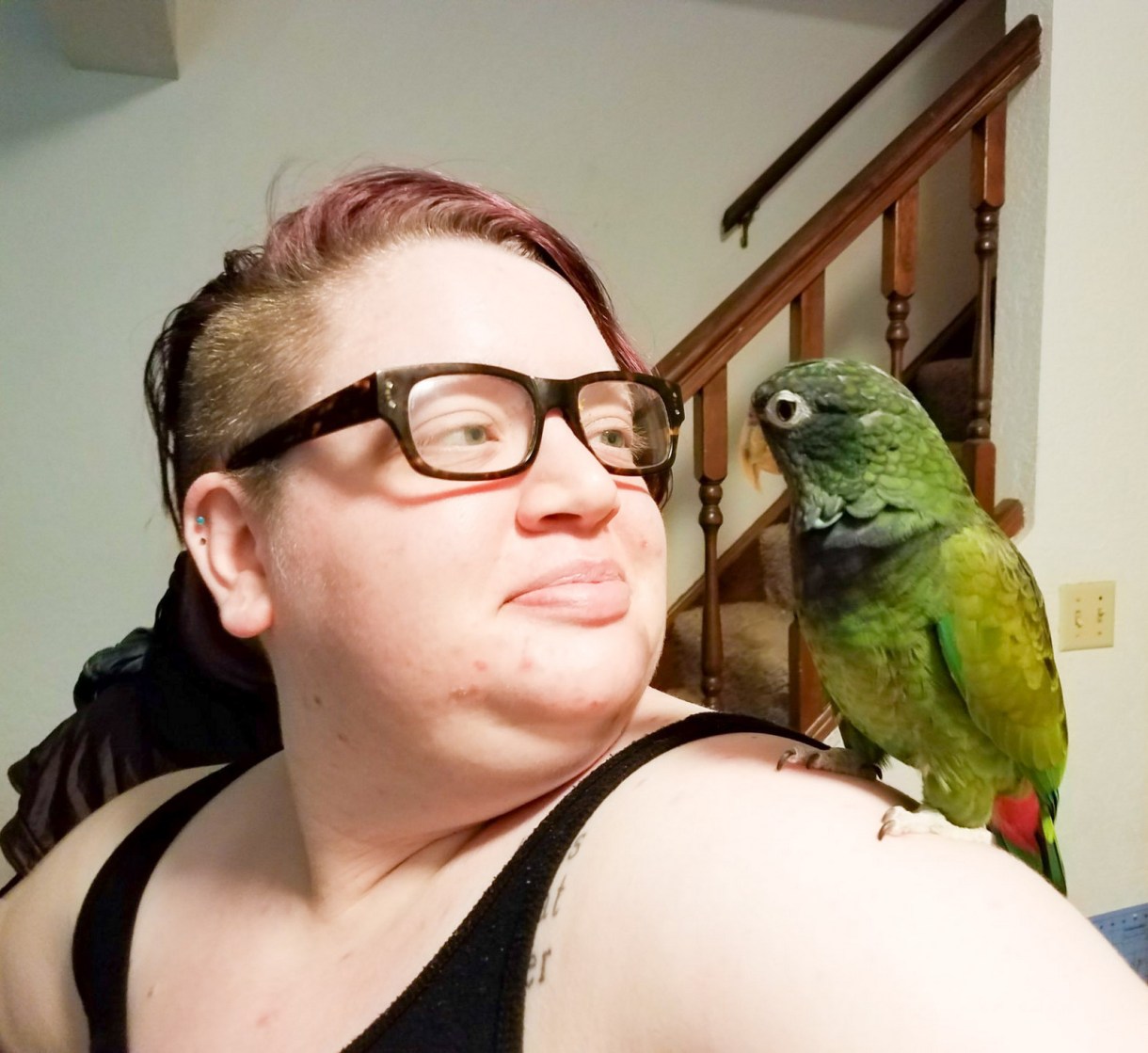 “My wife and I brought George home after the parrot I grew up with passed away. We were going to give him a different name, but he could already say “George,” so we decided on the car ride home that he would keep it. George is my emotional support animal and helps so much with my anxiety disorder. He can tell when I’m upset and dashes over to make sure I’m okay. Parrots require a high level of care since they are tame rather than domestic, and I consider his needs my full time job. Caring for him is the most rewarding work I’ve done. He is silly and ridiculous, and constantly brings me joy. You can find more photos and stories about George on his blog.” 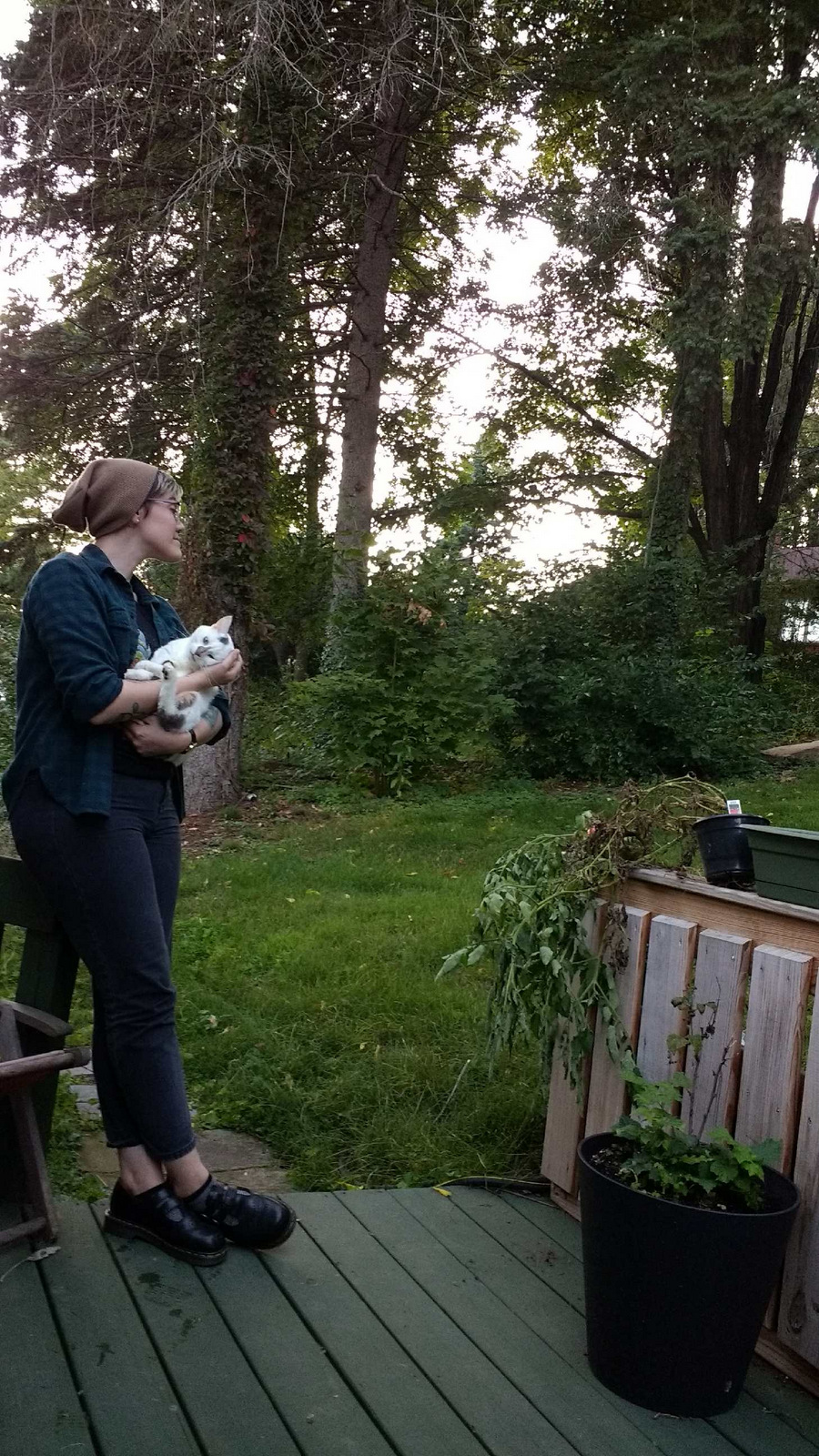 “Wilson was an accidental (but not really) adoption. The week before Christmas 2013, my perfect prince cat, Bartok, fell suddenly extremely ill with a respiratory infection. He passed away in soon after, and my entire heart was broken. Bartok’s best friend, a giant fluffy Maine Coon named Swayze (he’s very fancy and an excellent dancer, just like the late Patrick for whom he is named), was as grief-stricken as I was. He roamed the house, crying out for his friend, and searching all of Bartok’s favorite hiding spots. I thought we’d never heal. On a random trip to a local pet shop the following March, my roommate and I encountered Wilson. He was weird and lanky, thrusting his long arms out of the cage at us. I fell in love, and though we decided to go grocery shopping first so we could “think about it,” it was pretty obvious that he’d come home with us that day.

Swayze took Wilson under his catwing, showing him around the house, teaching him how to be our cat, and grooming the shelter off of him. They became, and still are, best friends. Over the last few years, Wilson has become the most lovable cat I’ve ever met. Our vet was shocked when he made himself totally at home in the office, unlike most animals, and he is instantly every new person’s bff. He is most at home curled up on my chest, whatever the time of day. He’s got a quirky fang from before I met him, and he never learned how to properly meow, so he’s got a tragic-sounding little chirp-cough that he lets out when he’s feeling especially needy. I love him (and Swayze) more than nearly anything else. Instagram: derpcatofficial” 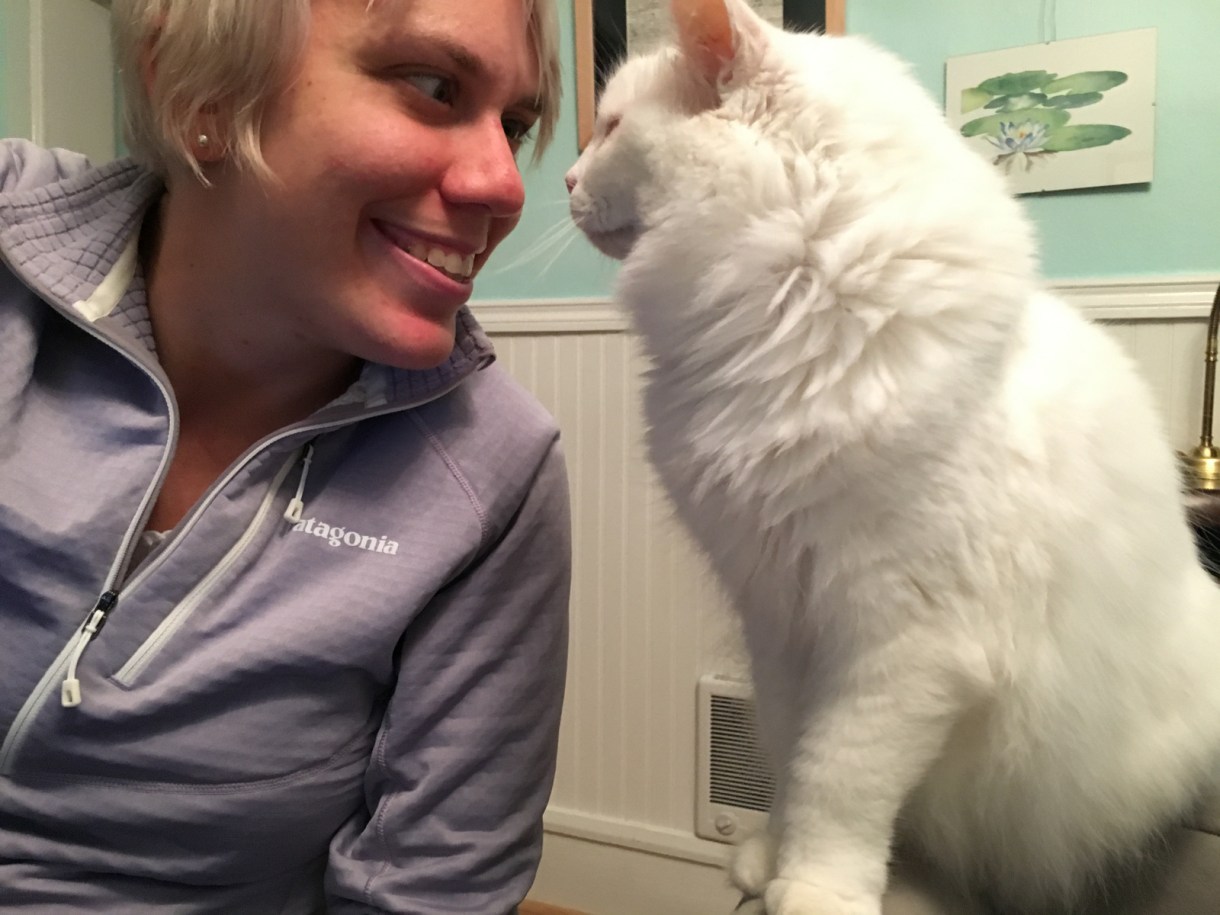 “Obie came into my world just a few months ago because a girlfriend of a friend was moving out of town and needed someone to take the cat temporarily. The cat’s other mom (the ex of the girlfriend) wasn’t able to take him at the time. This feels like the queerest cat-obtaining story I can imagine. He came with his name – he is named after Obi-Wan Kenobi. We’re a great team. I put food and water in his bowls and scratch his chin; he snuggles on me and, more importantly, I feel like he’s opened my heart and taught me how to love another being in a way I totally did not expect. When I dyed my hair platinum blonde I realized we kind of look alike. Obie is a wizard. He pees and sometimes even poops in the toilet (he came that way). He does not flush.” 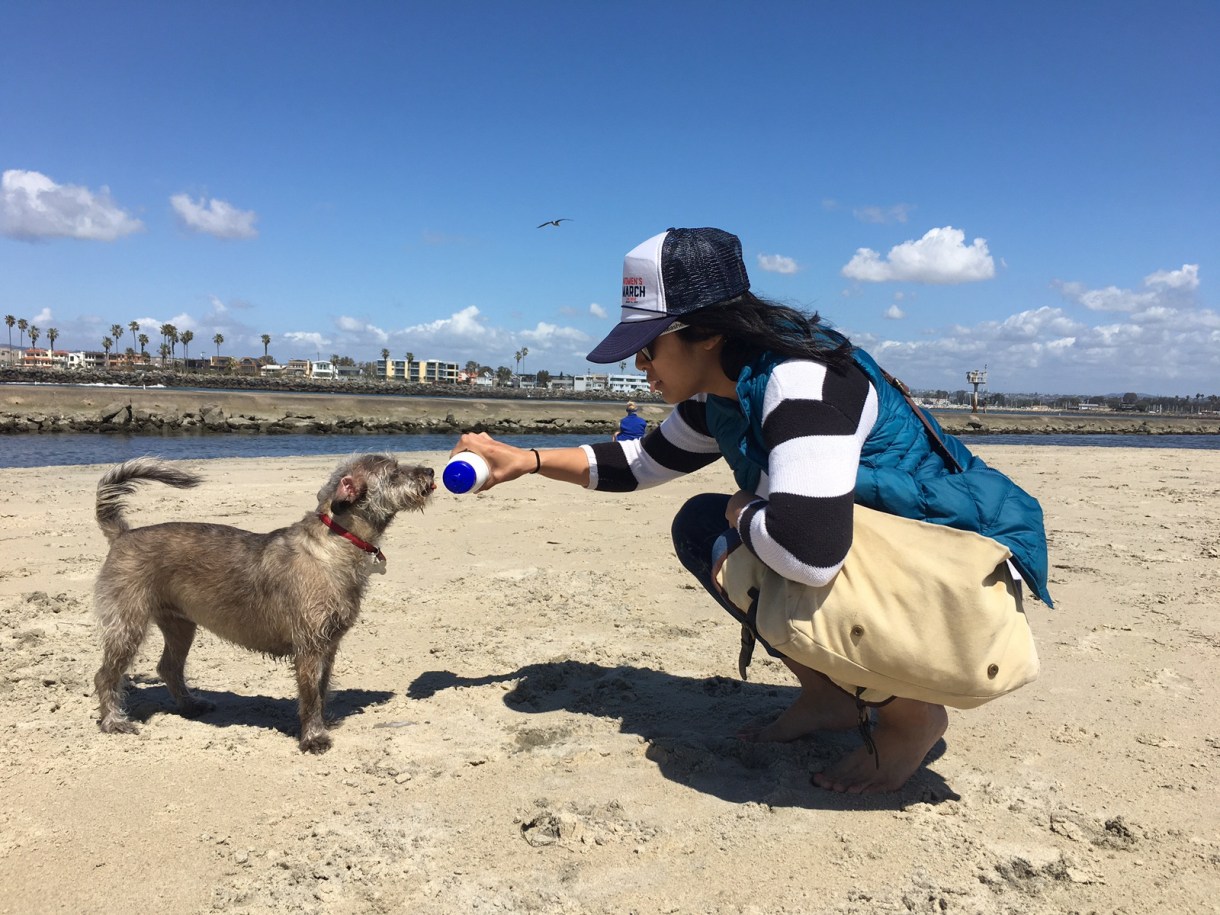 “I adopted Bonnie after finishing mourning my senior dog that had passed away. I was intending on adopting another senior, but when I interacted with Bonnie at the humane society she smelled like home. Bonnie smelled exactly like toasted rice. When she was younger she would wiggle so hard from excitement she would knock herself over.” 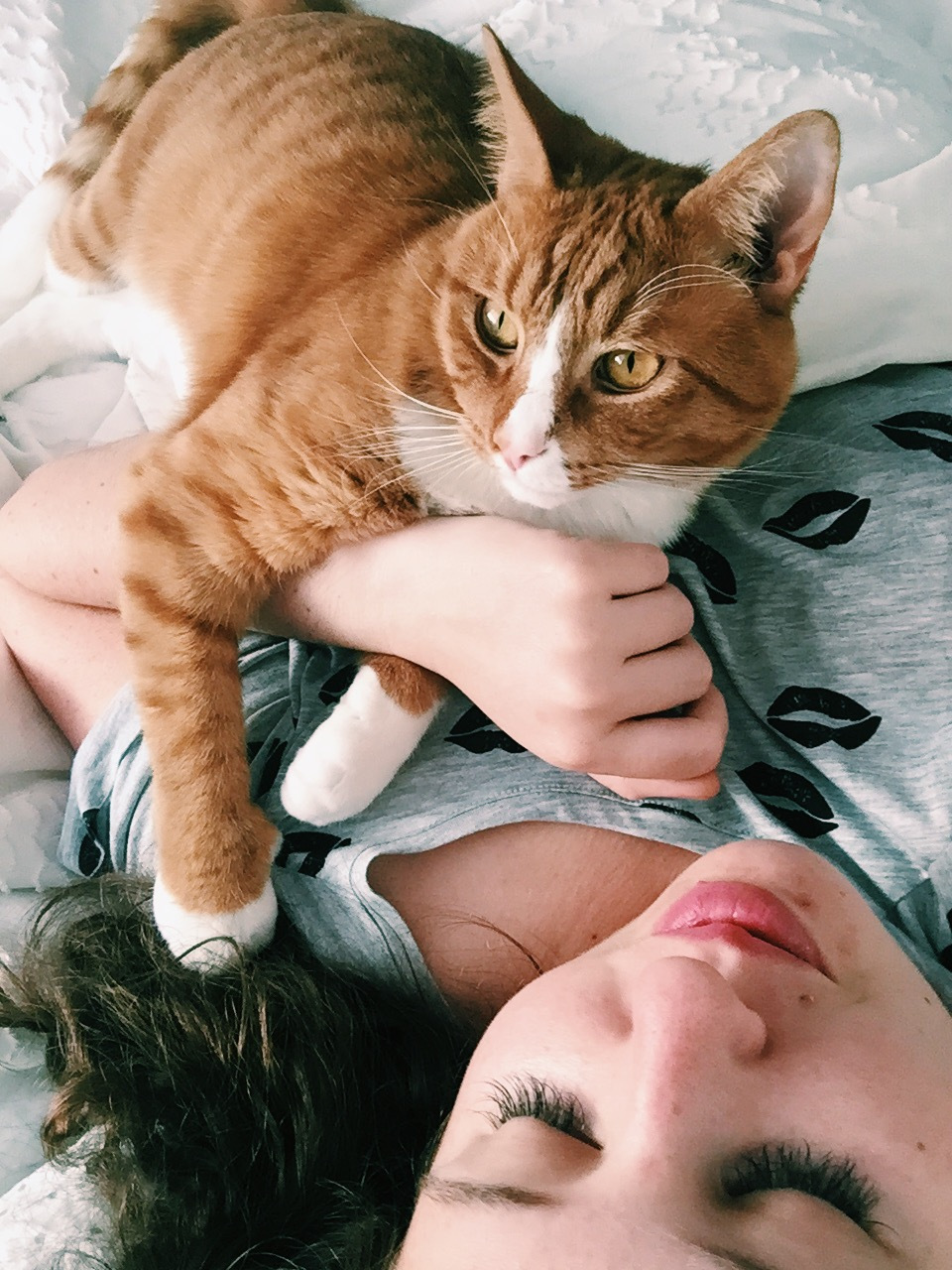 “In true lesbian style, my ex convinced me to adopt Potato three months into our relationship. But P and I are stronger than ever! His favorite hobbies include chasing lasers, listening to Drake, and licking my face way past when I’d like him to stop licking my face. I sometimes like to ask him if I adopted a cat or an actual potato. It’s still unclear, honestly. You can follow him on Insta at @potatochadband.” 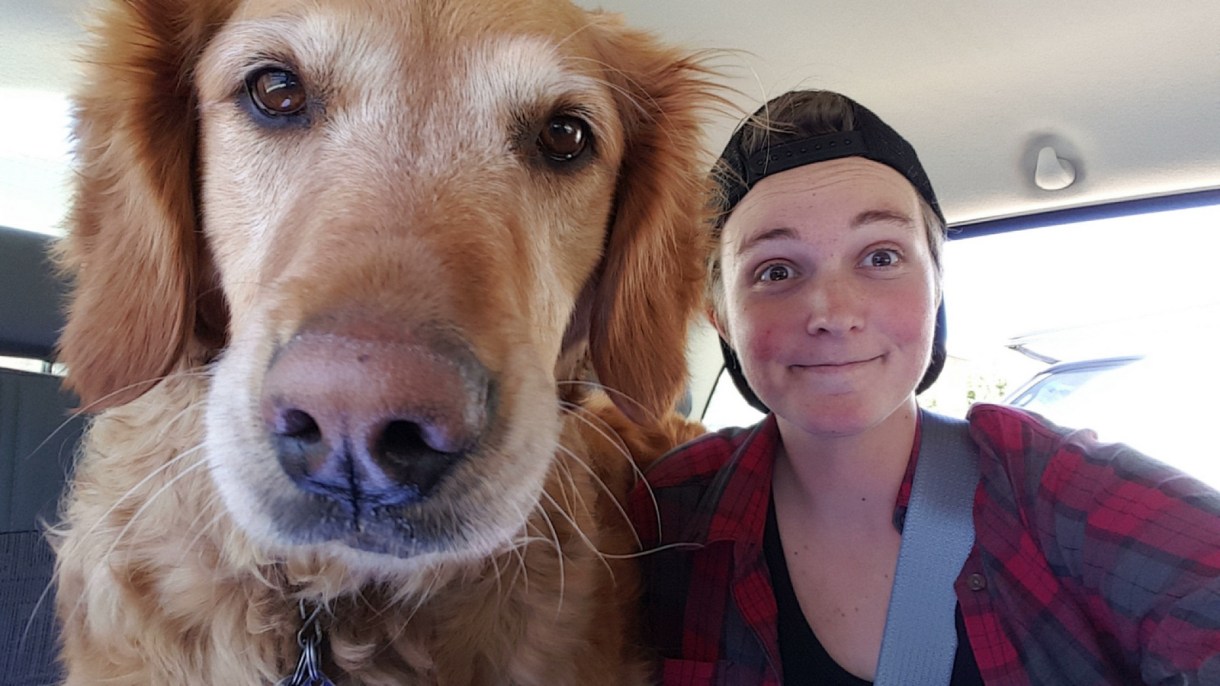 “Percy was my aunt’s dog. She was sweet and well-trained and loved her ladybug toy. She would sit on my aunt’s front lawn (no leash) and keep watch on the neighborhood. Sometimes, she took herself down to the river for a walk. She was great at comforting people and happy to play or cuddle but not too needy – such a perfect combination. I spent the summer of 2016 in their small mountain town and loved the time I got to spend with Percy. Unfortunately, she passed away from liver failure just a few days after I left for home. I cherish the time that I got to spend with her that summer, romping through the woods and wildflowers. ” 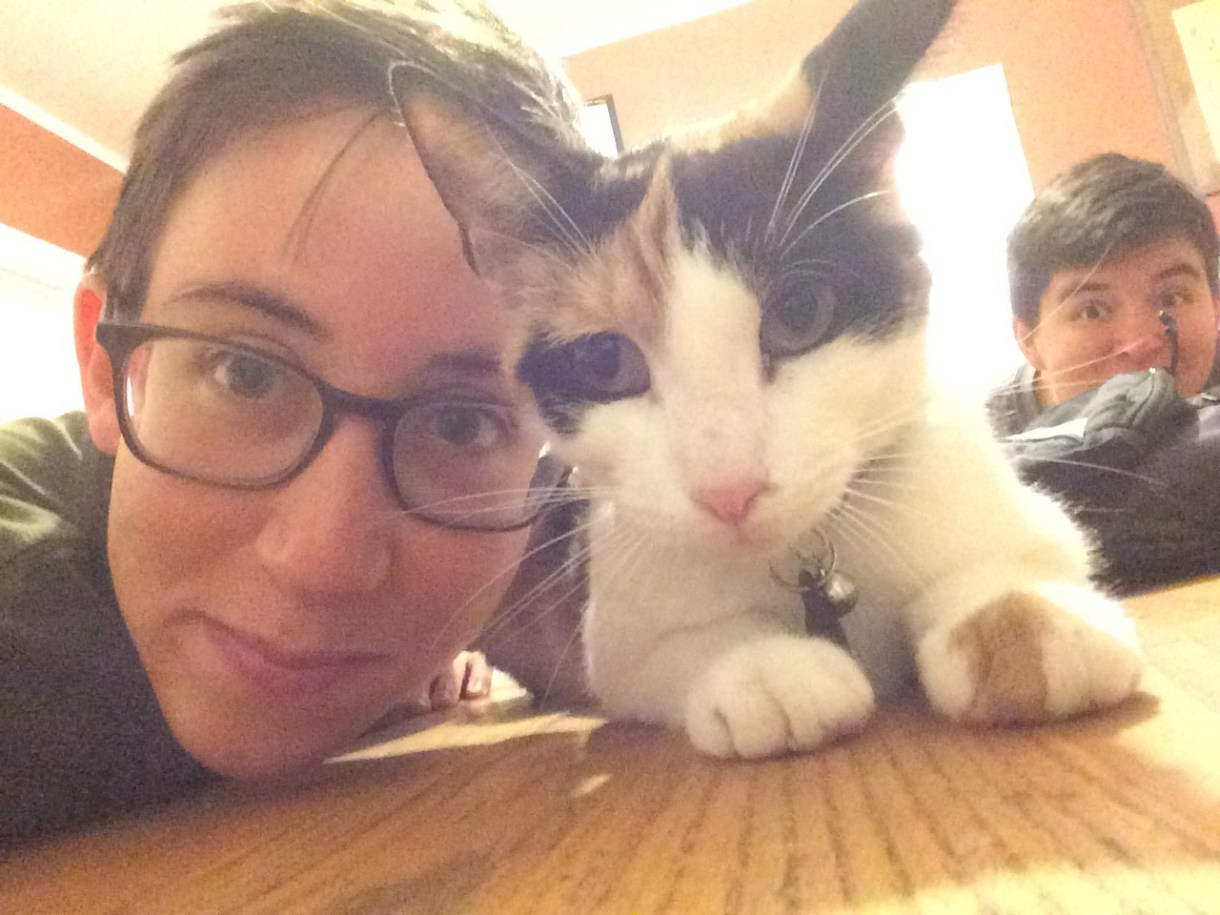 “Paluza is a dog in a cat’s body: she greets us at the door; she [vocally] begs for food; she fetches her favorite toy, a stick.” 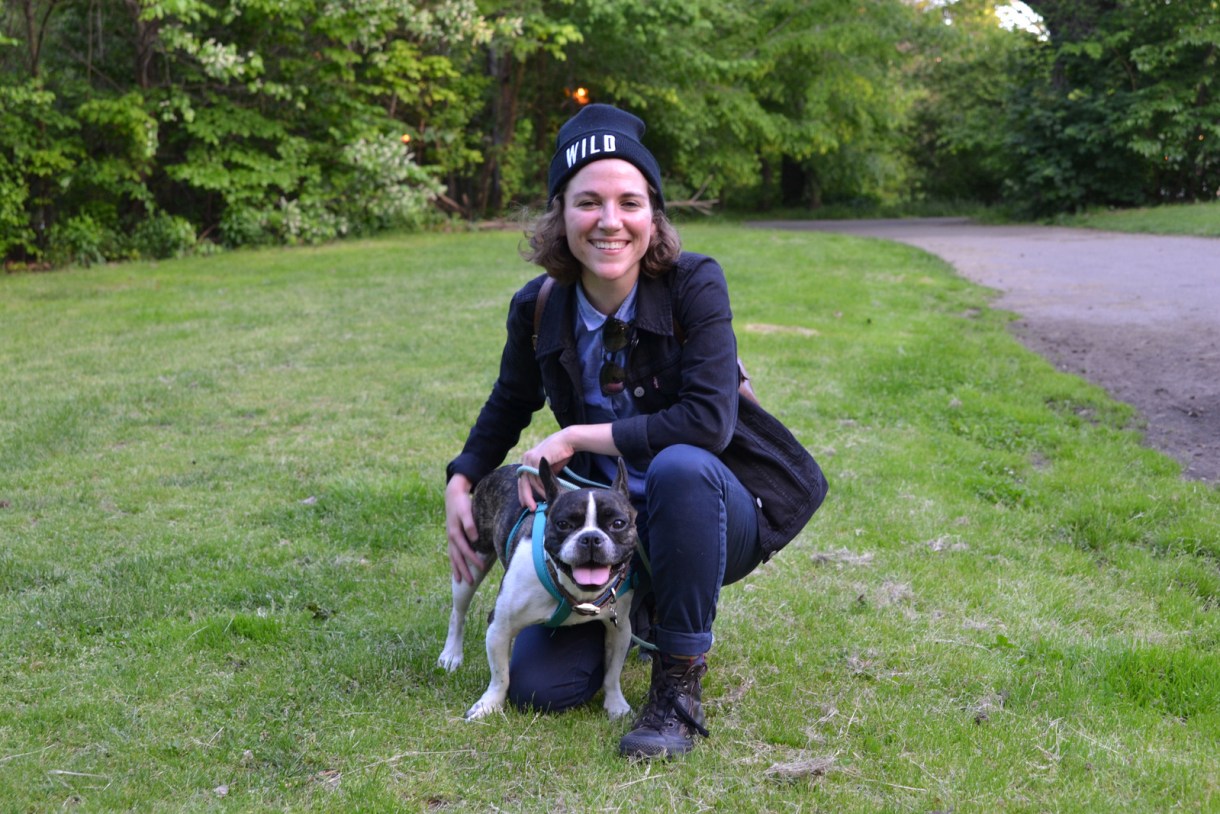 “I adopted Batman about a year ago from AC&C on the UES. He was surrendered by his owner who was a single mom with a newborn baby. Sounds like she couldn’t afford him anymore — when I got him he was being fed half the amount of his daily intake and was less than half the weight he is now. My friend worked at AC&C and alerted me once he was taken into their system, as I had been looking to adopt a similar breed for about a year!

I changed Batman’s name from Brian… it didn’t seem to suit him. I saw his shadow and it just clicked! He is super cuddly and definitely a companion dog. His three favorite things are wood chips, piles of leaves, and long grass. We go to Prospect Park at least once a day, since I live so close, and he loooves the dog beach and off leash areas. His Instagram is @keepingupwithpup”