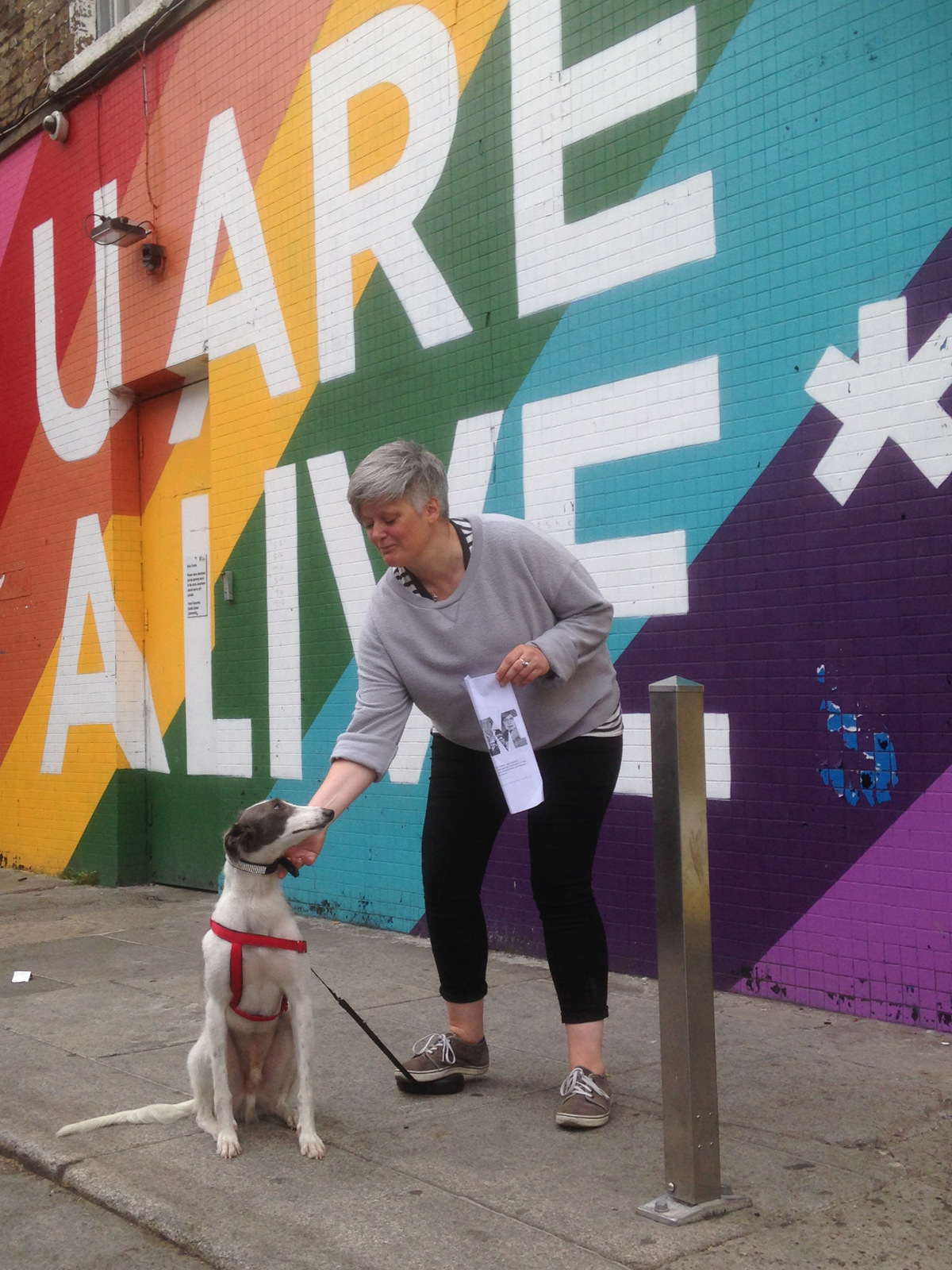 “Murphy is a Lurcher rescue, and a certified bad-boy lamb-killer, who is now in an urban human-veggie household. He came with the name, as he had three owners in 6 months, we decided to keep the name. Althought as it was easter 2016, the centenary of the Irish uprising, we did consider naming him Countess Sparklybitch in honour of Countess Markiewicz, a heroine of the uprising. Murphy may have been sporting a diamanté collar at the time.

He is a furry ball of energy. Docile and devoted on the lead, a ferocious sprinter off it. And his fur is enticingly soft, which is why he loves being petted by everyone he meets. Murphy frequents Instagram here.” 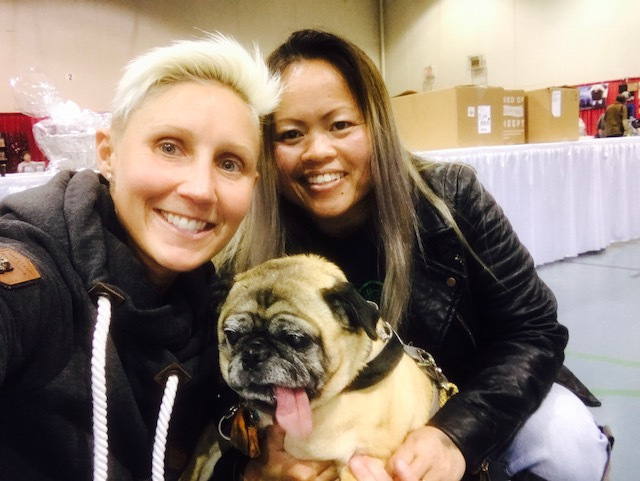 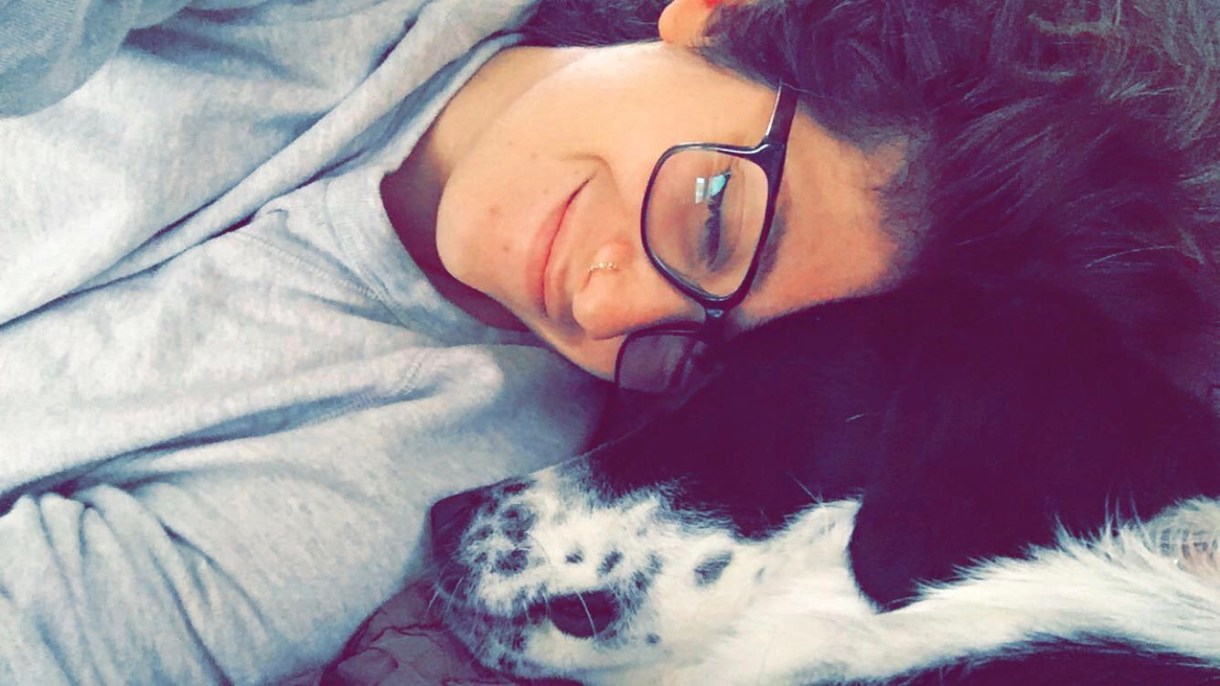 “I adopted Rosie from a shelter when she was seven months old. She already had the name Rose, which is my middle name after my great-grandmother who died in the Holocaust. I call her Rosie now to make that slightly less weird. Rosie and I both love swimming, eating ice cubes, and being bratty bottoms.” 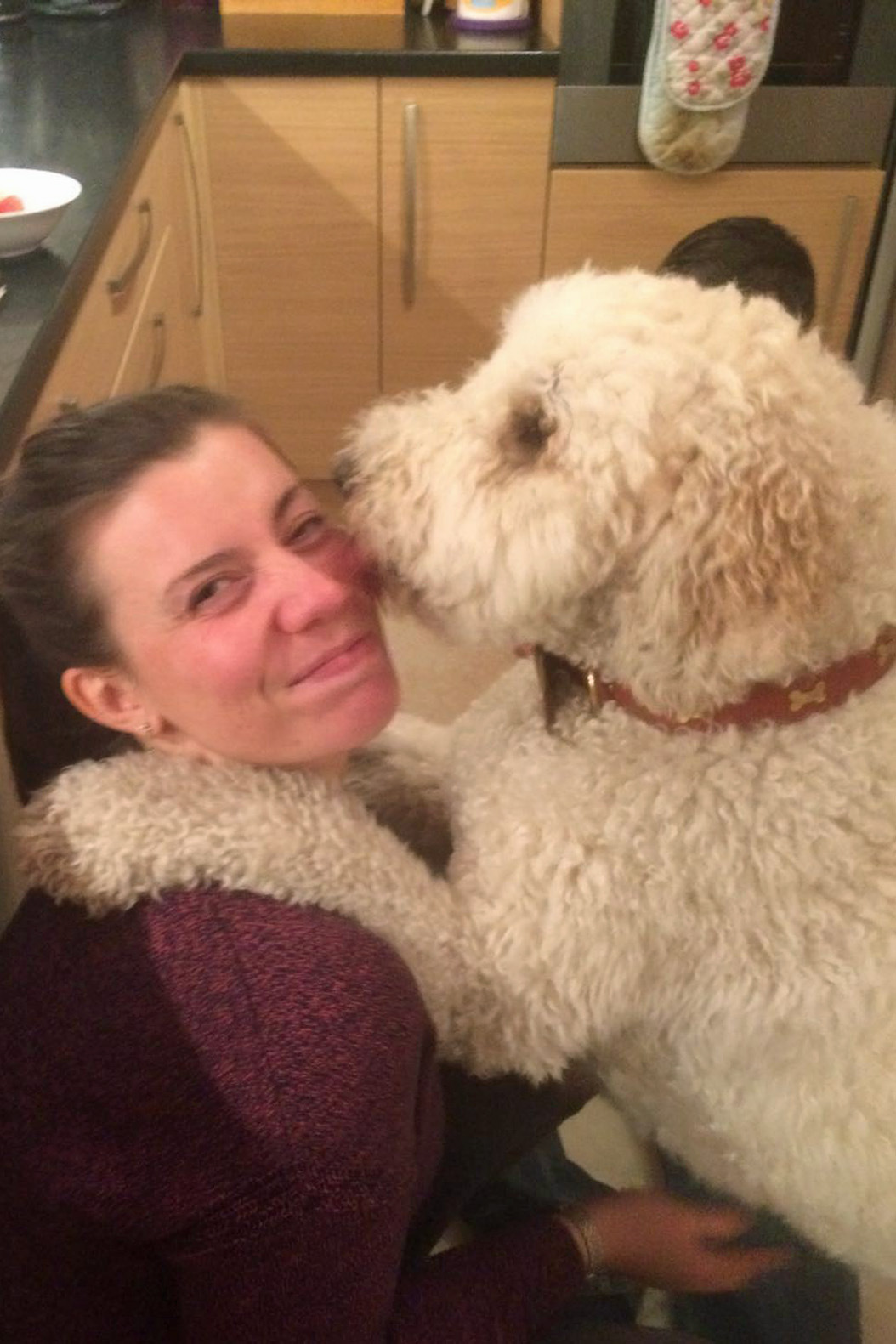 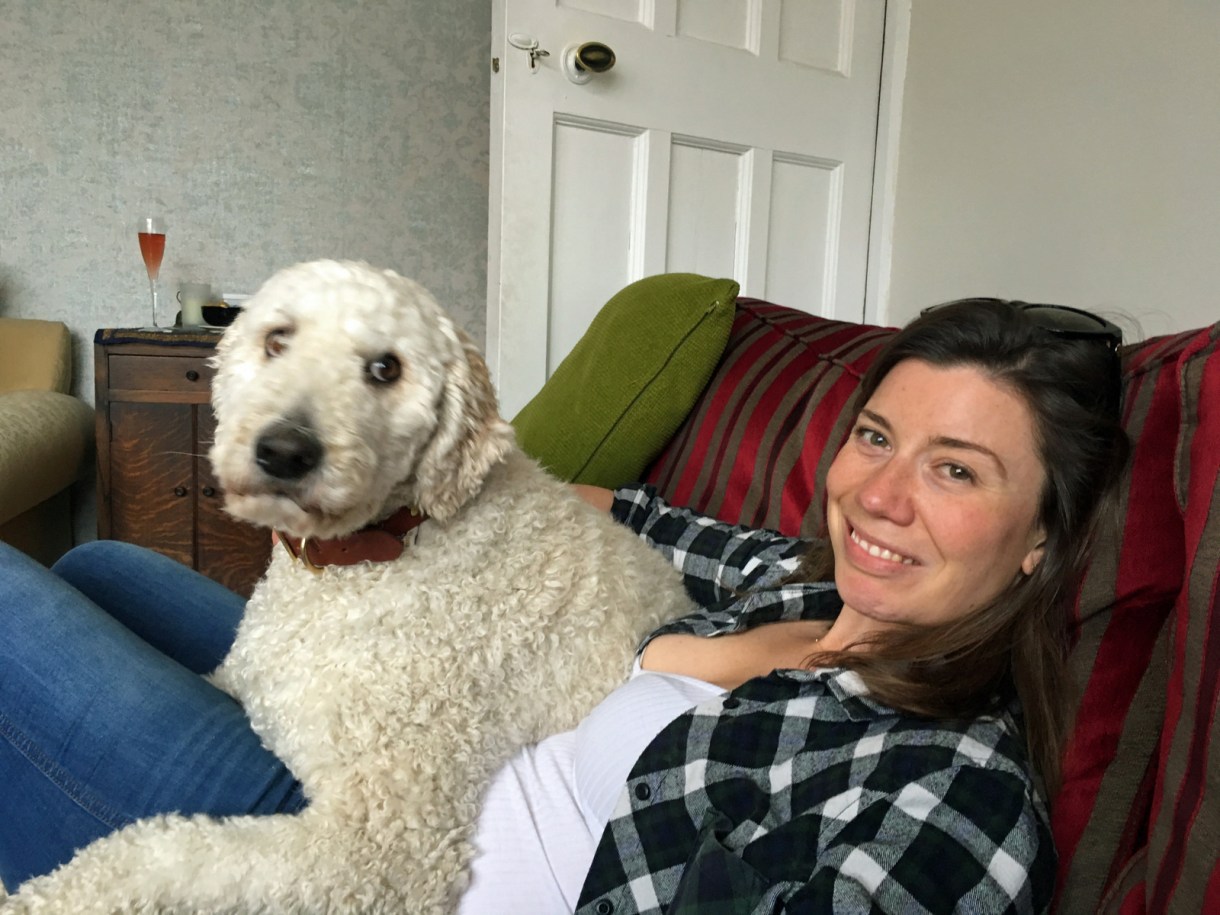 “OK, strictly speaking Molly is my mother’s dog… but I helped select her when she was a puppy and collected her from the breeder when we she was ready! We got Molly from some friends of my brothers whose dog had a litter of puppies and my mum chose the name ‘Molly’ because “she looks like a Molly.” Personally, I wanted ‘Nora’ because she gnawed things but I gracefully conceded.

Molly is the most loving, cuddly, family focused dog I’ve ever come across. Her favourite things to do are licking people’s faces with extreme intensity; trying to catch shadows; chasing torch beams and barking at seagulls when they sit on the roof. She dislike bath time, the sea, anything water-based, objects/ people with big heads (especially motor cyclists), toys that make the wrong kind of squeak, dogs that are bigger than her, the neighbour’s cat, horses and most of all – anythingthat bangs. She’s needy, a bit of a wuss and a total princess but my goodness, I love this dog.” 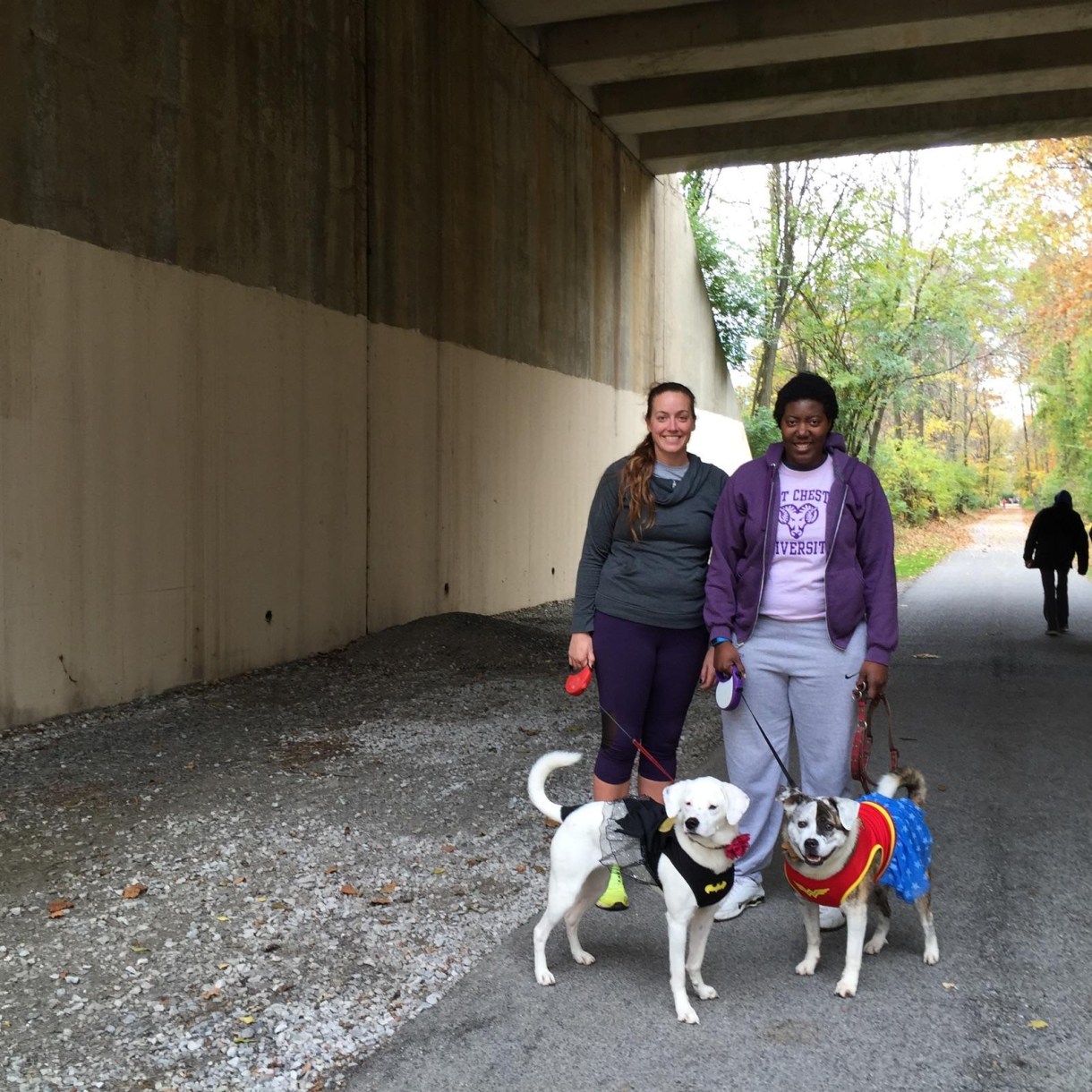 “Both of my girls were adopted from the Brandywine SPCA in West Chester, PA. We got Pebbles in March 2011, when she was about a year old. We were told that she was supposed to be be mostly a mix of Mastiff and Shiba Inu but they were clearly wrong because she’s only 55 lbs today. Pebbles was returned to the SPCA because she is an alpha dog and the people that adopted her before us already had an alpha in their house so she was causing issues with trying to take over.

We adopted Penny in March of 2013, when she was a puppy and only a couple months old. She was all white with only a few spots and she was the last one of the litter when we saw her. After seeing her on a Friday and going in to look at her on Saturday morning (the puppies always go super fast at any SPCA), we barely got her. This little boy and his mother spent some time in a room with her before we did and they ended up not taking her. When they walked away we got our shot! We knew we definitely wanted to take her home. And just had to introduce her to Pebbles and make sure that they got along before we could. She is supposed to be mostly Walker Hound but most people think she’s a Dalmatian because she has a lot of black spots on her coat. She has a large black dot on her butt (which you can kind of see in the pic) and she literally gets more and more spots everyday as she gets older. My girlfriend and I are constantly finding new ones. And she’s so skinny-looking that people always mistake her for a puppy still.

The simultaneous best and most frustrating thing about Pebbles is that she is straight up a DIVA. She’s beautiful and very spoiled and she knows it. She literally stops and stares at any person that she sees when we’re walking because she both wants and thinks that they have to stop to pet her. The best, and also simultaneously sometimes infuriating, thing about Penny is that she is a true dog in that she loves to chase squirrels and rabbits in our backyard, she bites and tears up things she’s not supposed to (the worse are shoes, tissues and plastic bags) and she loves to chew on various dog bones.

The best thing about both of them is that they LOVE people. So no one is ever in any danger of being bit or attacked by my dogs. We like to go on long walks together. On most mornings if I’m feeling up to it, I’ll take them for 3-4 mile walks.

We have come to the conclusion that Penny is autistic. That’s a real thing in dogs. There are lots of things that she can only do certain ways. For instance when we had a couch right by our front door, literally every time we came in from our twice daily walks she had to immediately jump over the back of it, off of it and then run outside thru her doggy door. Then she’d come right back in. Also our front door opens up so that it can block the stairs which are to the right as soon as you walk in. If this door is open, and Penny wants to come down the stairs she is unable to do so until the door is closed and she can then get around it because she has to come down the stairs into the living room in a specific way every single time. And these are just TWO of the many idiosyncrasies that she has and that she goes through on a daily basis. Also Penny rarely if ever gives kisses. She will smell your face for like a full 30 seconds but she will probably not lick it.

The weirdest things about Pebbles are that she won’t accept a treat from your hand. You have to literally drop it on the floor and then she’ll eat it. And she always, and I mean always, ducks her head when you go to pet her on the top of it. Sadly, I think this might have something to do with why she was returned to the SPCA. Like someone probably hit her on the head a lot to discipline her.” 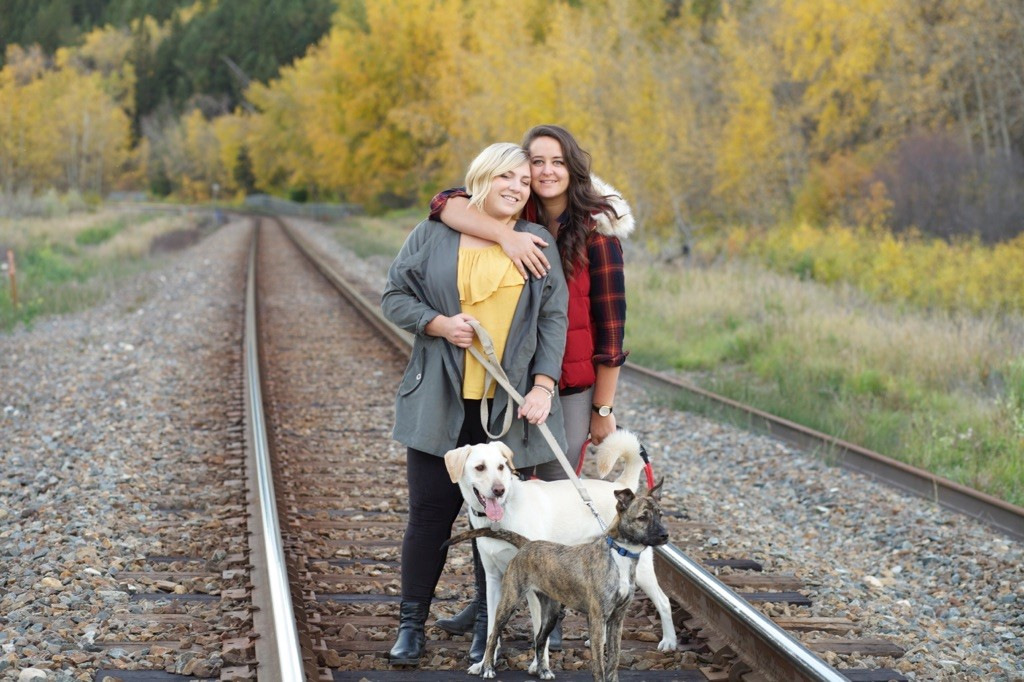 “Kasper and Katie came into my life as a package deal. She was the first girl I ever loved and he was the first doggo to steal my heart. I went from being dog indifferent to dog obsessed. On a birthday trip to Mexico in 2016 we decided to adopt a scruffy little street girl and name her Roo (like Quintana Roo). These pups make us laugh and get us outside every day during the long Calgary winters.” 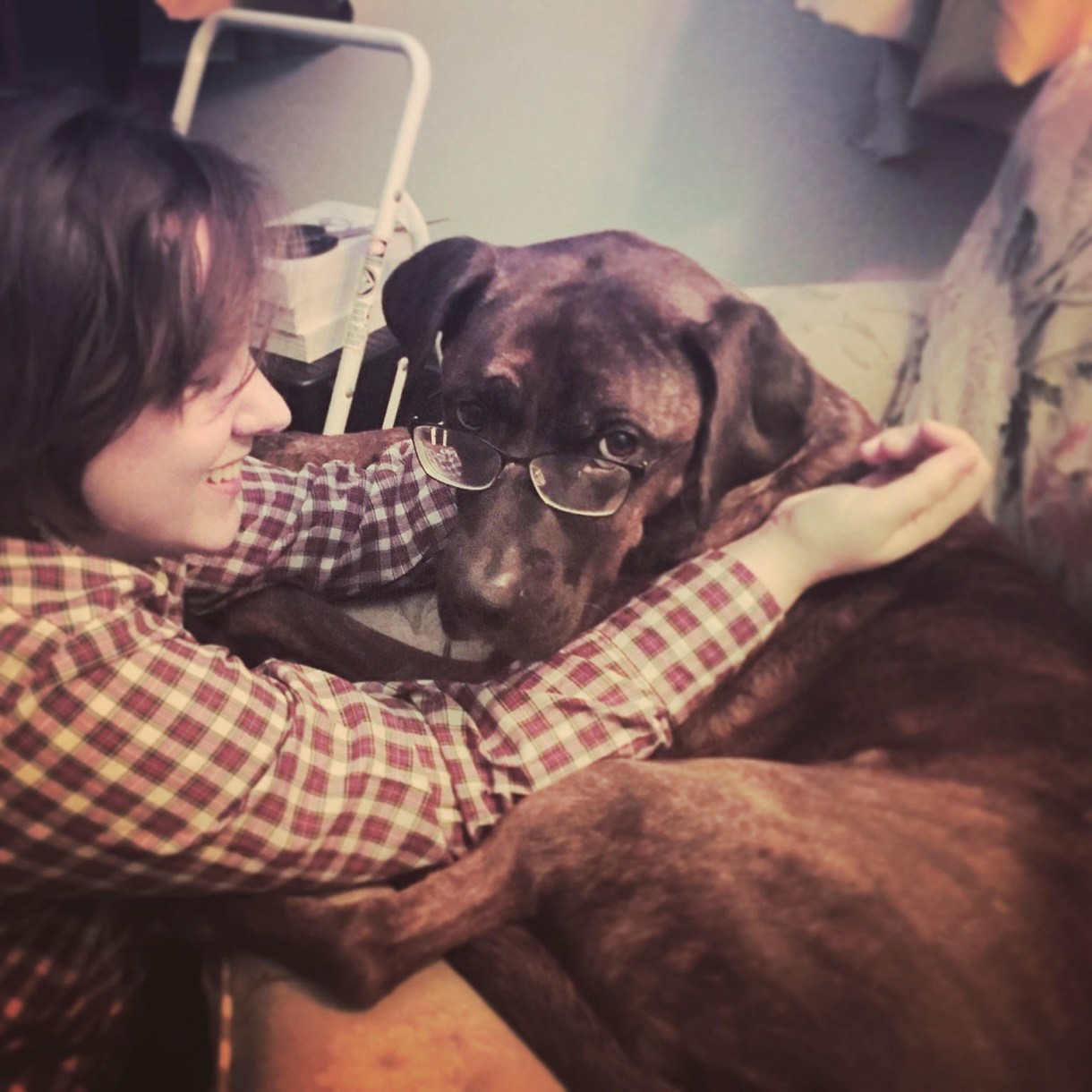 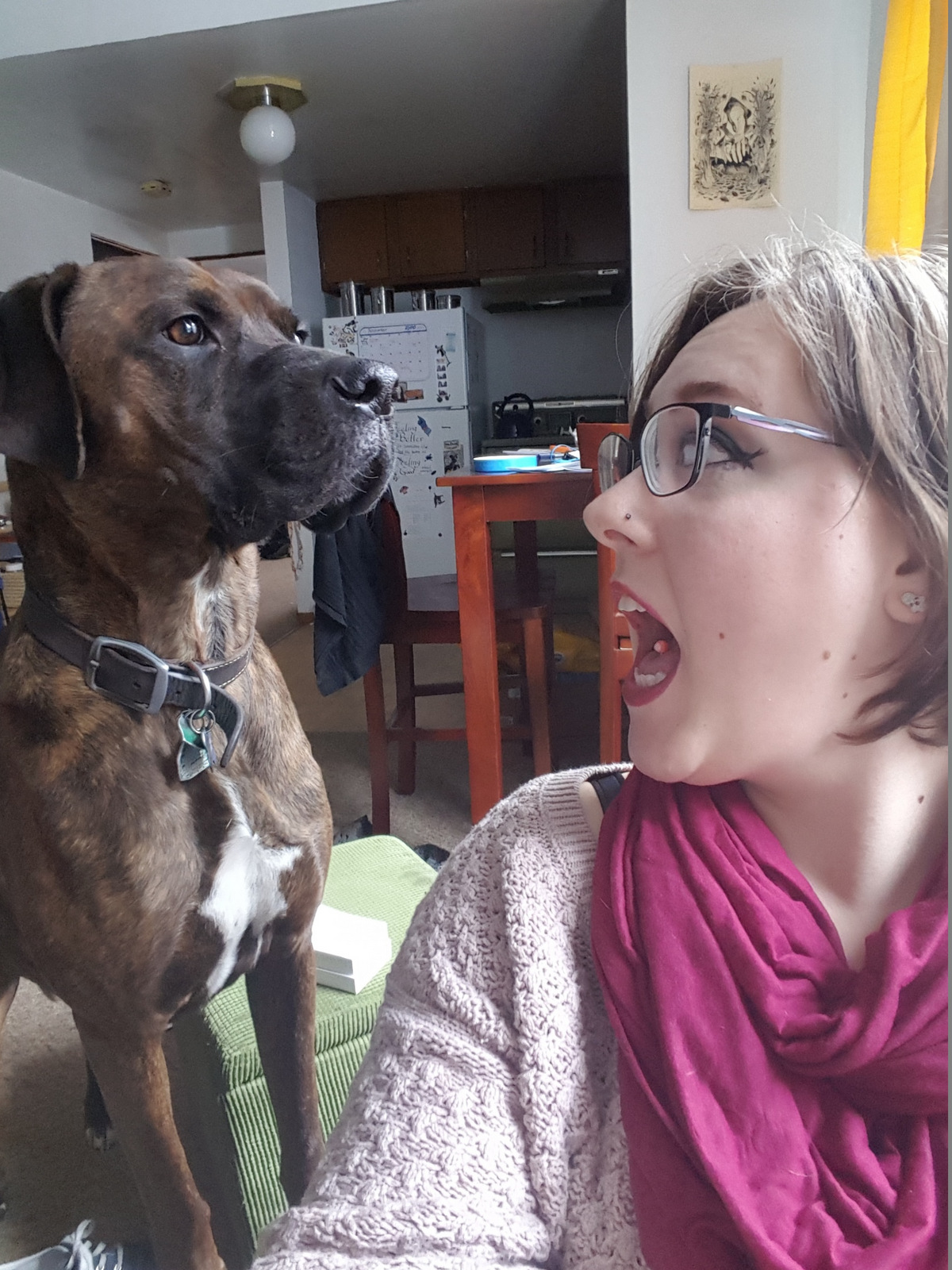 “I went to animal control to pick up a 30 lb lab mix named Cocoa. By the time I got there, she was gone. I walked around the kennels for a while and this beautiful brindled dog caught my attention by sitting perfectly still, and staring at me. I walk over and said “Hi, handsome. I’d love to take you home, but you’re Too Big!” I turned to go, and behind me I hear this DEEP, MOURNFUL “WOO-oof!” I turned to look at him, and he was still sitting stock still, except for the faintest, hopeful tremble of the tip of his tail. This 80 lb boxer/mastiff cross has been mine ever since, and I’m grateful everyday that he picked me. If you want to see more of him, you can follow him on Instagram!” 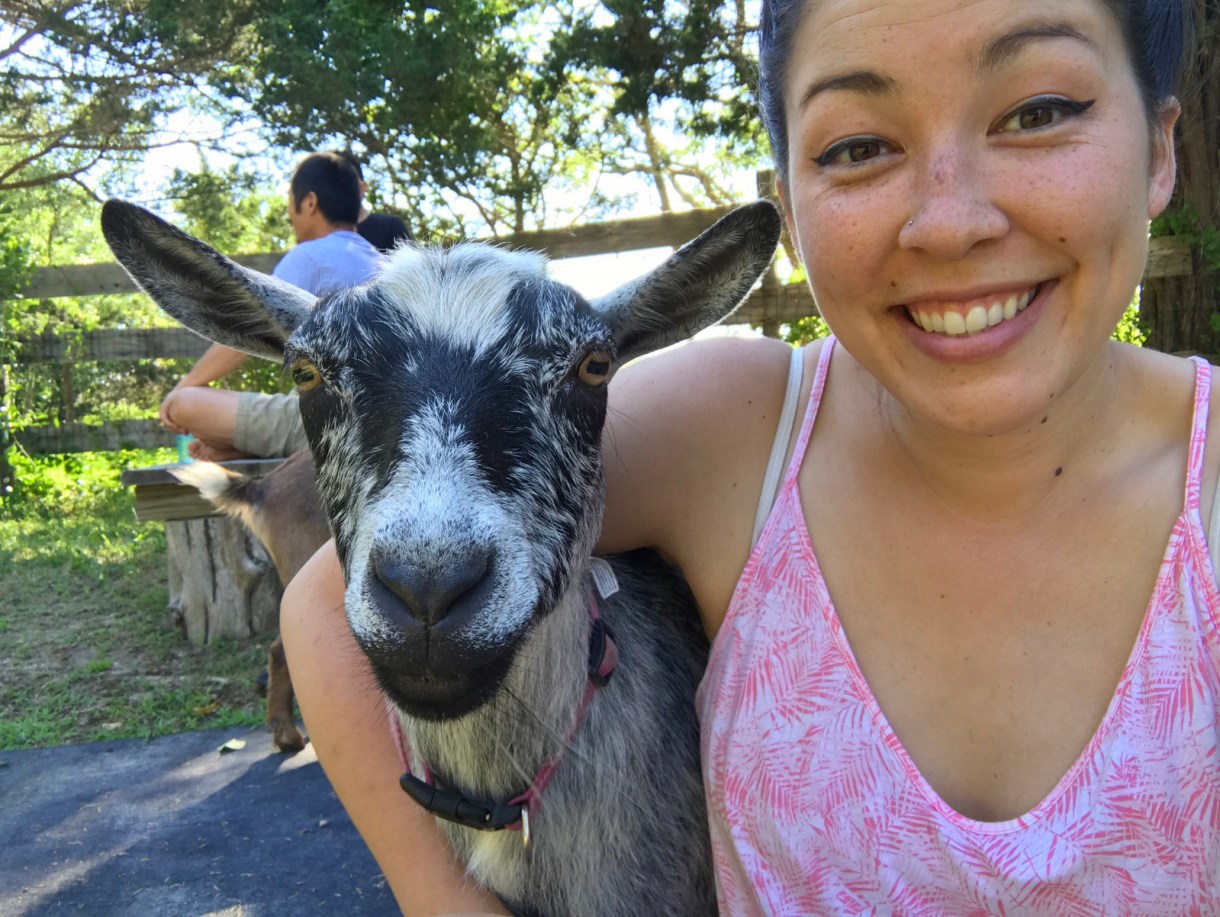 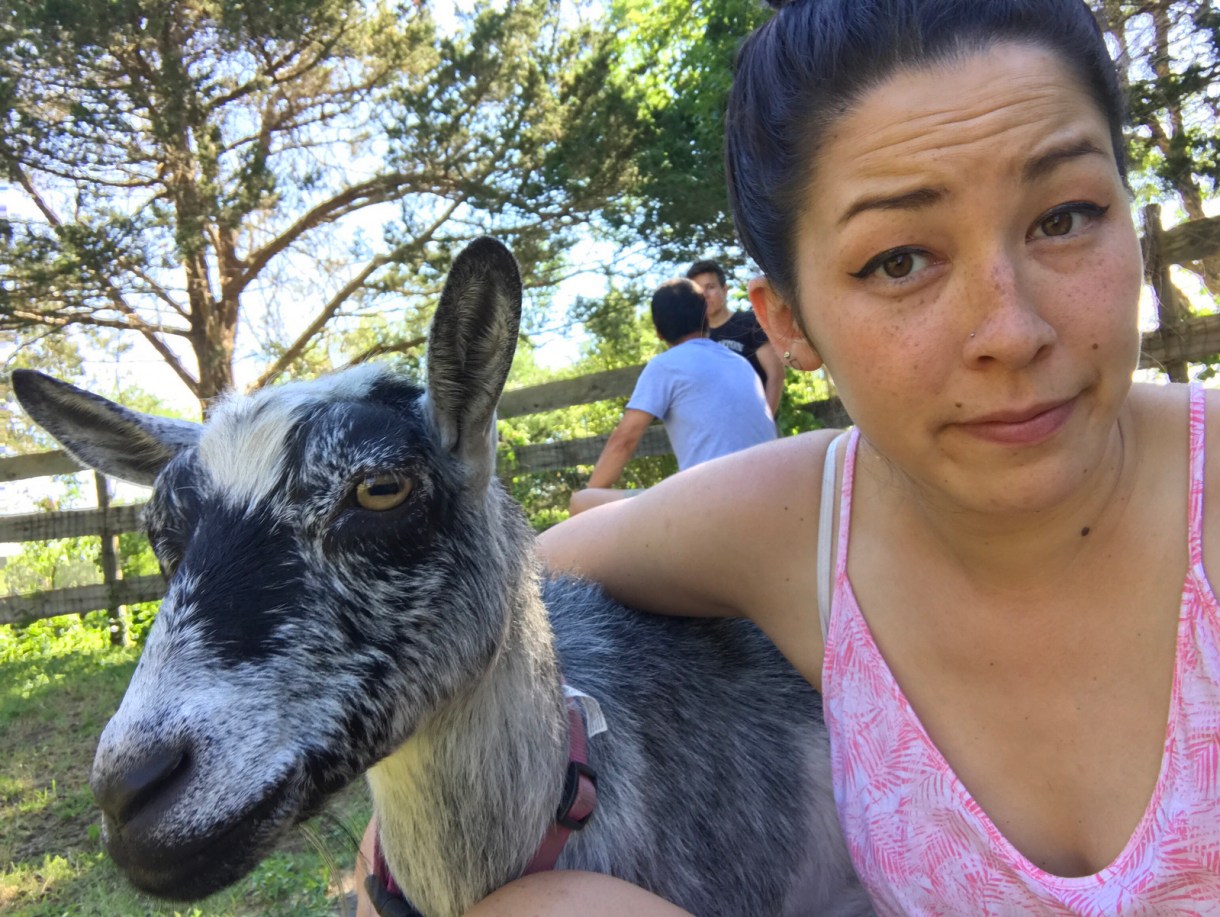 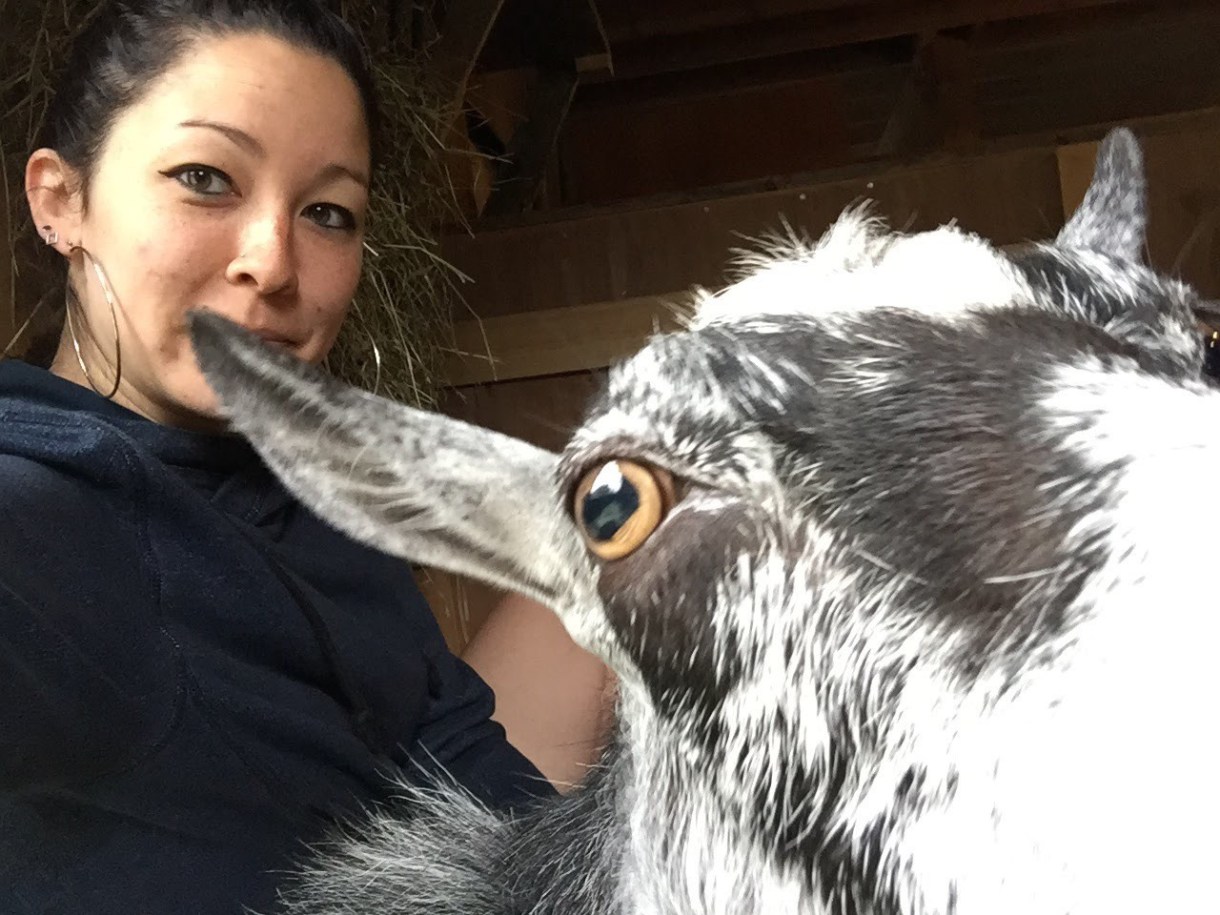 “My parents have lived all over the US and finally moved to Cape Cod in the hopes of having a farm. My mom really wanted goats and they have quickly become part of our family in ways I didn’t think goats could. They came with their names, which we didn’t want to change, though we have come with an array of nicknames for them individually and as a group (“goatles” being the most frequent one). Their favorite foods include poison ivy, Brussels sprouts, fresh hay, and apples as a treat. They split their time between eating, sleeping in the sun, staring at nonexistent danger, ramming each other’s heads, and trying to run away from the wind — all of which are activities we practice as a family. They aren’t particularly best friends, but they snuggle during the winter out of survivalism and seem to tolerate one another’s existence. They are outrageously cute and when they’re in heat and screaming, they sound like terrifying demons, which is fun for everyone.” 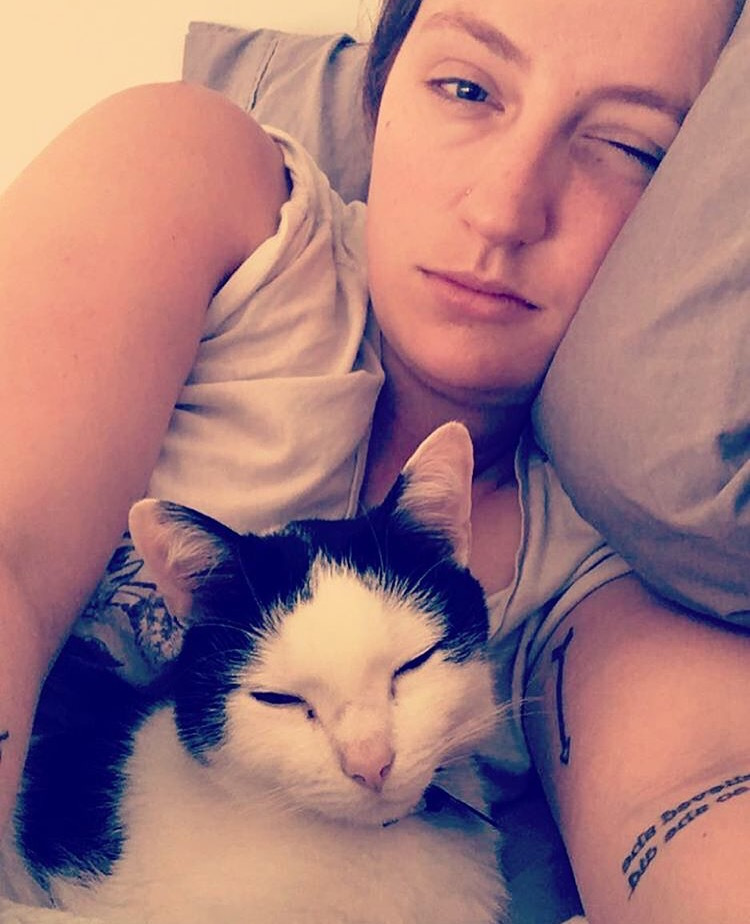 “Kristen discovered Milo on a Craiglist ad posted by a woman fostering rescued kittens. Milo, along with his litter, was found in a plastic bag in a Target parking lot back in 2013. His black and white spots immediately caught Kristen’s eye, and after a brief home visit, Milo started his new life at nine weeks old at Kristen’s apartment in Northwest DC. Previously unnamed, but called “Panda” or “Oreo” by his foster mom due to his markings, Kristen decided on the name Milo from her favorite children’s movie, Milo and Otis.

Milo and Kristen’s favorite activity is throwing massive shade at anyone that crosses their path (see photo). Other past times include Milo playing with his catnip-filled rainbow toy, play fights that end up in Kristen’s favorite sweaters being ruined, and a good ole fashioned sand-paper tongue licking on Kristen’s nose.” 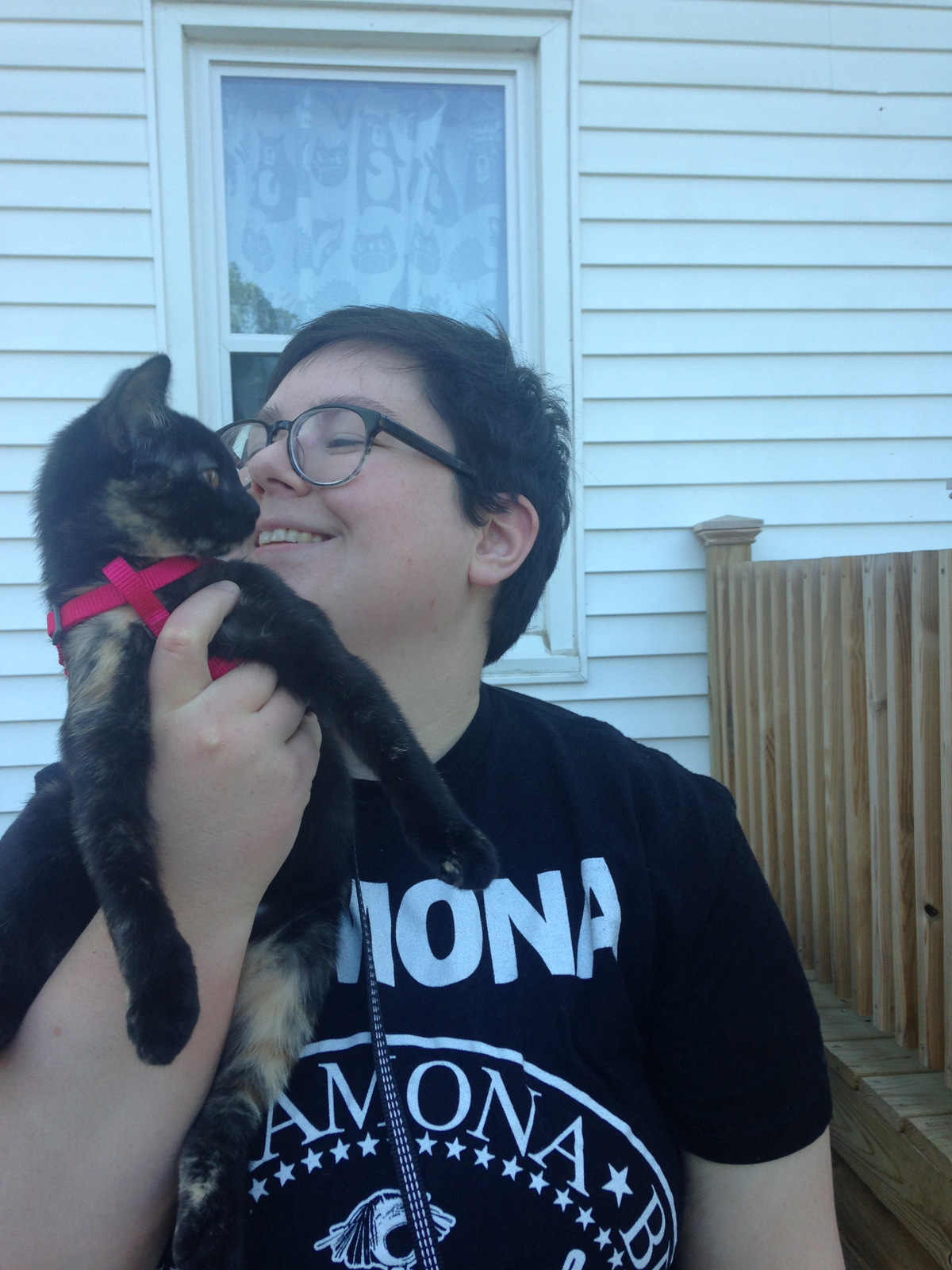 “My partner and I adopted Ramona in April from a local pet rescue called Underdog. She is named after Beverly Cleary’s Ramona Quimby. We got her when she was Ramona Age 8 Weeks but she quickly grew into Ramona the Pest. Introducing her to my partner’s cat, Iggy, was a long process but now they cuddle and play together (when she’s not chasing him out of sun beams and off of laps). Ramona is such a delight! She’s leash trained (that’s her cute pink harness in the photo) so we’ll go outside for some bug hunting (she loves to watch ants) and sunbeam time. Our other favorite activities together include sleeping in, playing with her favorite string on a stick toy, and ear scritches.”