Hey queer ladies — just like your nosey mother, the federal government wants to know what’s going on with your weight. So much so, in fact, that the National Institutes of Health have given researchers at Brigham and Women’s Hospital nearly $3 million over the last four years to figure out why lesbians are more often classified as obese than straight women. Their biggest conclusion so far? It’s because lesbians don’t play sports. I guess all those softball stereotypes just aren’t true. In an era of significant funding problems in the NIH and disturbing data about LGBT health disparities, why continue to fund a study like this? It might be because mainstream straight culture and medical science is hopelessly fixated on the alleged “obesity epidemic.”

As a culture, we are absolutely obsessed with weight and dieting. In 2012, the diet-and-weight-loss industry was roughly a $61 billion empire, hawking pills, books, exercise equipment, videos, and meal replacements. A 2012 report showed there were over 100 million dieters in the US, and — big shock here — a whopping 85% of weight-loss product consumers were women. Despite the preoccupation (and profits) associated with this weight-loss and diet craze, the US still has a lot of fat people; the CDC classifies more than one-third of Americans “obese.” We’re not just obsessed with our weight, either. We’re intensely focused on other people’s size, so much so that a 2009 Yale study found that sizeism infects just about every aspect of our lives. Weight-related discrimination affects people’s employment, their ability to get quality health care, their access to education, and more. Oh, and that same study also found that anti-fat bias disproportionately affects women. Another study demonstrated that concern over being judged about their size is stressful enough to cause measurable changes in women’s physiology. Many say this fixation on body size is a health concern, but the research supporting it is sketchy at best.

You almost can’t read the news anymore without seeing the phrase “obesity epidemic.” According to many health researchers, the US is looking at a huge obesity health care crisis over the coming years. Even First Lady Michelle Obama is on this train with her “Let’s Move” program for combating childhood obesity. Unfortunately, there are two big problems with much of this research— almost all of it is based on the completely bunk Body-Mass Index scale, and a growing body of research is demonstrating that many of the diseases associated with obesity are actually more likely due to physical inactivity. Let’s start with BMI. Like I said, it’s basically completely meaningless hogwash. So why do researchers and doctors continue to use it? Because it allows the them to categorize huge groups of people into relatively arbitrary research categories based on two simple measurements, weight and height. This, in turn, allows them to do large population obesity study far more cheaply and with less effort than the more complicated (and accurate) skin-fold testing. Unfortunately, what BMI-based studies ignore is a basic truth of all research: garbage in, garbage out. If you start with junk data (like BMI), your studies aren’t worth the paper they’re printed on. It can come as no surprise then, that there’s some pretty seriously mixed results when all that BMI stuff is forcibly shoved into models that include actual biological and medical data, like heart disease, diabetes, and mortality rates. Kate Harding at Shapely Prose sums it up well:

“Weight itself is not a health problem, except in the most extreme cases (i.e., being underweight or so fat you’re immobilized). …Obesity research is turning up surprising information all the time — much of which goes ignored by the media — and people who give a damn about critical thinking would be foolish to accept the party line on fat. Just because you’ve heard over and over and over that fat! kills! doesn’t mean it’s true. It just means that people in this culture really love saying it.”

The bottom line is that being active and maintaining good physiological measures of health, like fasting blood glucose, blood pressure, and blood lipid profiles, are considerably more important to one’s health than making sure your weight remains proportional the square of your height. 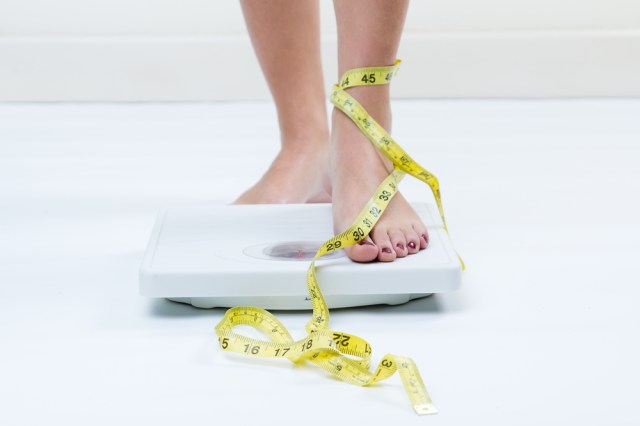 You’re probably saying to yourself, “Okay Mari, I get that BMI is zebra-droppings and the weight-loss trendiness is a truck load of festering garbage, but what does this have to do with the lesbians in that first study?” Well, inquisitive hypothetical reader, there’s a second interesting tidbit in all that “lesbians are more likely to be fat” business. As it turns out, queer girls (lesbians AND bisexuals) are ALSO more likely to NOT THINK they’re fat, even when their BMI puts them in one of the “overweight” categories. On the flip side, straight girls are more likely to think of themselves as fat even when they’re not. That’s right, “overweight” queer ladies tend to be less critical of their bodies than straight women.

Researchers want to call this a problem of self-perception, but I have a different theory. It could be, perhaps, that queer girl culture doesn’t suffer the incessant, unreasonable pressure of the male gaze in the same way that straight girl culture does. After all, if you don’t have to concern yourself with attracting men as romantic partners, it’s considerable more reasonable to not give a fuck about their photoshopped-magazine-and-mainstream-pornography-fueled beauty standards, and you might be less likely to internalize that garbage. A dig through some psychology journals show that I’m not making this up. One study showed that lesbians tended to rate the attractiveness of bigger women higher than straight women did. A later study showed that women who felt a strong connection to the lesbian community scored better in personal body image and had fewer indications of depression.

So, we’ve got an NIH study about fat lesbians, a problematic cultural fixation on weight and weight-loss, and a rejection of heterosexual beauty standard by queer ladies. What’s the takeaway here? It’s that we should be concerned when science and medicine make such considerable efforts to pathologize aspects of queer culture that conflict with mainstream straight culture, especially when those aspects of straight culture are hideously broken, like the fat-hate and weight obsession. The fact of the matter is, the study from Brigham and Women’s operates on a unpleasant, and perhaps unfounded, base assumption — that there must be something wrong with queer women because they tend to be larger than straight women. Given the lengthy history of the medical establishments need to assign diagnoses to members of the LGBT community for violating cisgender and heterosexual cultural norms, I think we ought to take a critical eye to research like this, especially when it’s founded on as something as inaccurate and useless as BMI. Loving each other at all shapes and sizes is perhaps one of the best things about queer lady culture. Let’s not let some shaky science wreck that up.