Greetings! And welcome to this recap of Legends of Tomorrow Season 7, Episode 1, “The Bullet Blondes,” aka the one that’s a bit of a circus.

And I know it hasn’t really been that long since the Season 6 finale, but I’m so glad these goofballs are back. This episode was classic Legends, top to bottom, so let’s get right into it.

The citizens of Odessa, Texas, 1925, are filing into the Sheriff’s Office one by one to report the strange goings-on of the night before. Glowing lights, dinosaur-looking creatures. The sheriff seems vaguely unamused but looks like perhaps he’ll look into it.

Back on the range, we find our Legends where we left them, their captains newly married, power walking to the Waverider, when a ship that looks alarmingly look the Waverider explodes their Waverider.

But this time we get to see past Astra’s, “What the hell?!” exclamation as the team surveys the damage. Spooner wants to just portal back in time to that imposter Waverider and give them a piece of their mind, and Sara loves that idea. 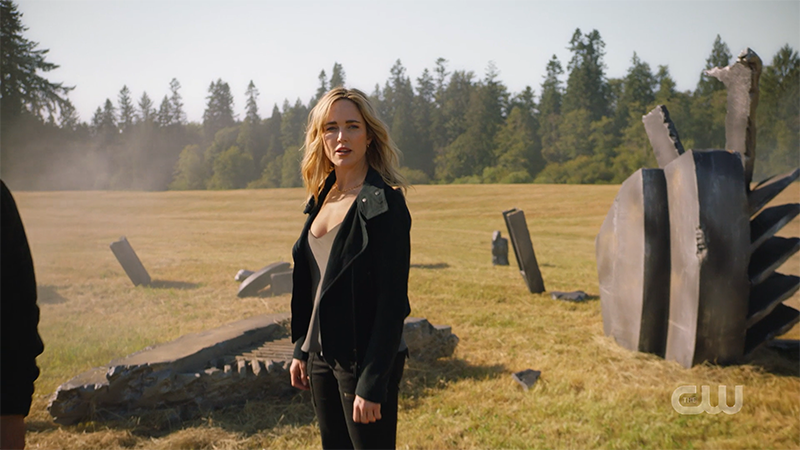 They do a classic, dramatic Legends ready-up montage, and just as they’re all ready to do their thing, they realize their portal watch is out of juice and they’re stuck in 1925. 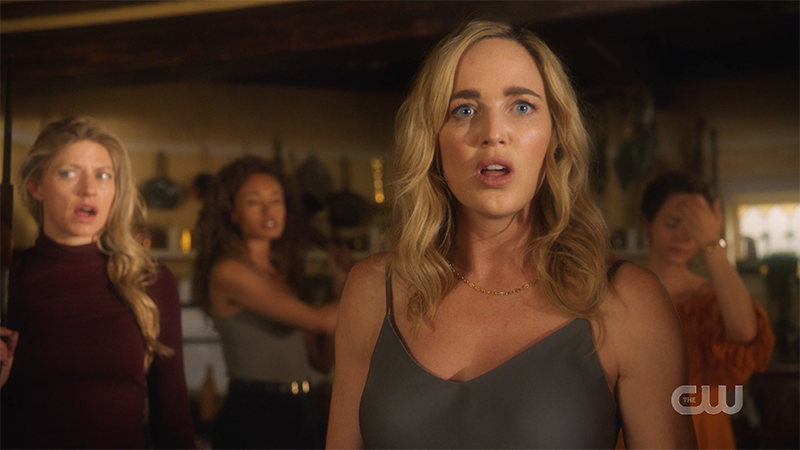 “If we’re going to be stuck in the 20s, we better befriend some bootleggers STAT.”

They start to devolve into a bicker, undoing that beautiful teamwork they just did, but then Gary mentions something about the old models of the Waveriders having a failsafe, and Ava remembers she added one to their Waverider, too. A black box of sorts, that would have emergency equipment like a backup portal watch and memory flasher, which would have come in handy when the pastor came knocking at the door asking what all the strangeness on the Cruz range was about.

The team splits up to find the black box, Behrad dutifully checking on his newly heartbroken sister. Zari channels the Fancy Zari of old and tries to brush it off, doing her best to sound less sad and more annoyed that Constantine blew her off with only a mysterious key to remember him by. 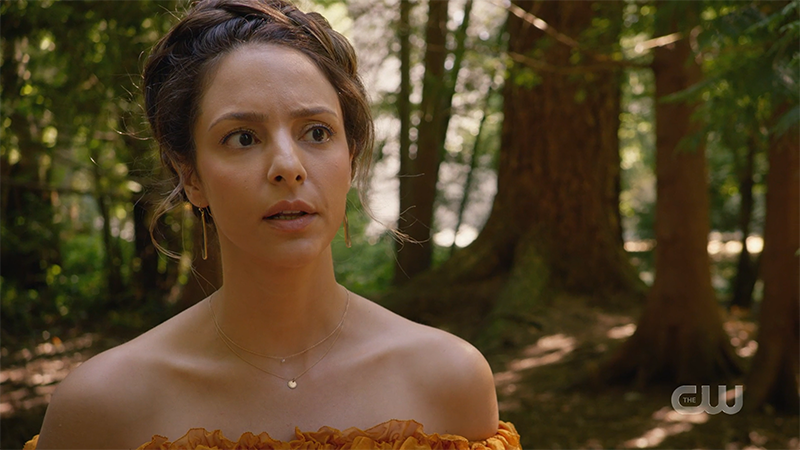 “Even his gifts were bad.”

Not having the honeymoon of their dreams, Sara is leading Ava through the rubble, trying to find the box while simultaneously calming her panicky wife down. She reminds Ava that where Sara is chaos, Ava is order; they are a storm and a lighthouse, a pirate ship and her anchor. Together, they are unstoppable. 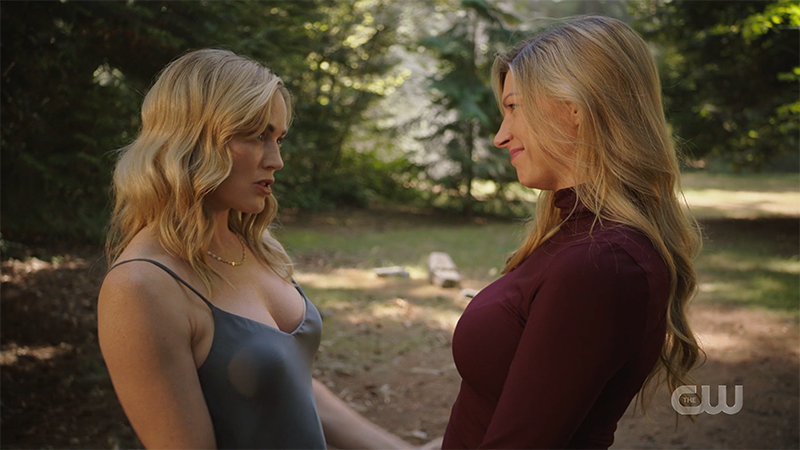 Spooner and Astra are looking too, but Spooner can’t use her tracker skills on a space box. Astra tries to whip up a little locator spell and suddenly I had a vision of Astra and Lena practicing magic together and I need to lie down.

The spell tells Spooner and Astra that it seems someone found the black box and moved it, so they follow its trail. 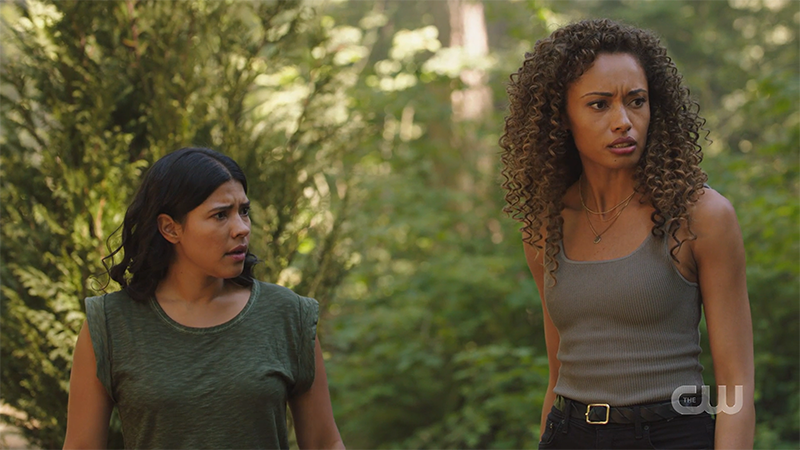 The height difference kills me in the best way.

Team Spatula follows the trail to the Sheriff’s office, and sees the pastor handing over the black box, but wisely heads back to the team before interfering.

They have to create a diversion, and Ava knows just the rule they could follow: Rule 44. And fortunately, Rule 44 has explicit instructions on what kind of cover story they should use: a circus. Turns out, you can hide just about anything under that big top without question. Zari loves this idea because it’s the chance for a group makeover, including herself, which is just what the avoidance doctor ordered. 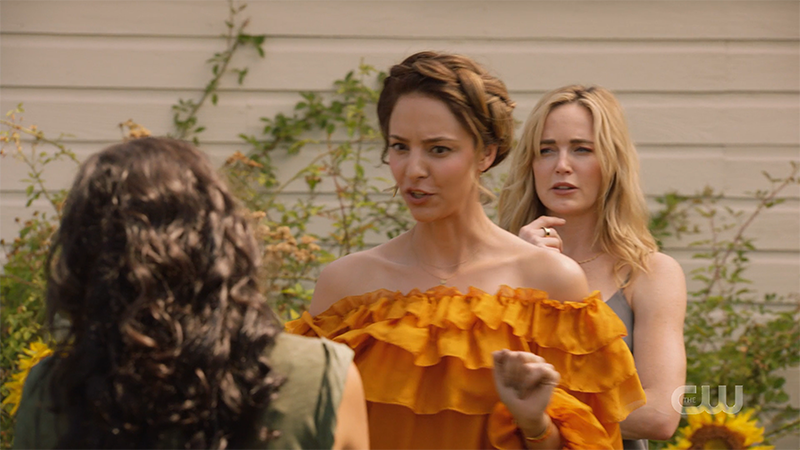 “Why yes I would love to cover my problems with clown makeup, thank you.”

Spooner and Astra decide they’d rather not be part of this circus, so they sneak off to fix the porch together instead.

Sara sends Nate and Ava, the whitest and straightest-passing of the group, to the sheriff’s office to try to get the black box back while she gets to work faking a circus.

Once Zari approves their looks, they head to town to tell the locals about the circus and how that explains all the strange things they saw and heard last night. 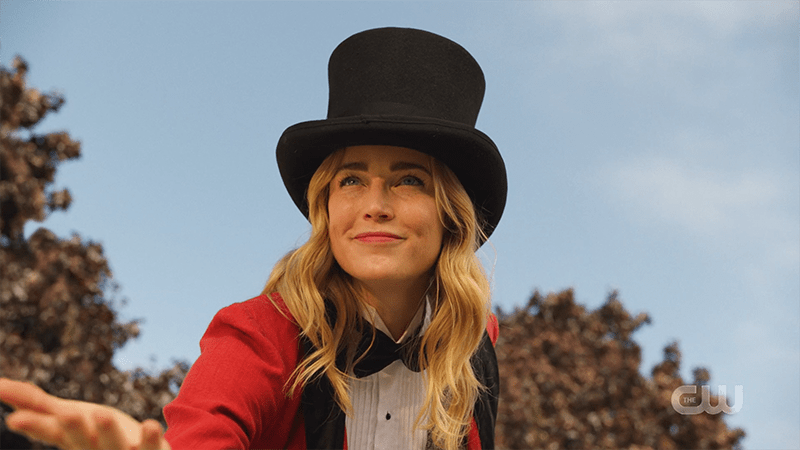 And, much like I would be, the town is charmed by that blue-eyed wink and doesn’t question anything she says. Her story is helped along by Zari and Behrad saying they’re animal handlers, and Gary showing some fire tricks, calming the people slowly but surely.

Ava and Nate go to talk to the sheriff, Nate deciding his cover will be that he’s J. Edgar Hoover of the FBI. Ava almost blows their cover by getting the presidents wrong, but they manage to wiggle their way back to the ranch, box in hand.

Before the rest of the Legends get back ot safety though, a little girl asks Gary when the circus is, and he panics and tells her that it’s tonight, on the farm. Which is not how this cover story is supposed to go.

The team is furious with Gary but when they see that Nate and Ava have the box, they figure they can just undo all this anyway. 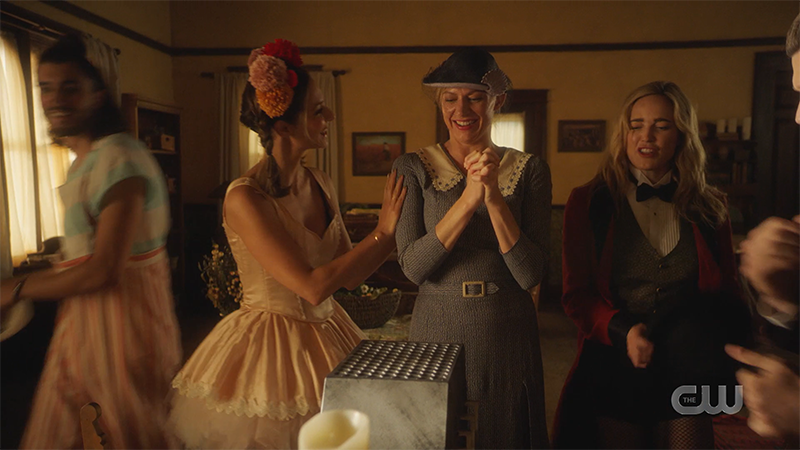 Just three gals excited about a box, nothing to see her.

But then they open it and it all but “womp womps” in their face, being empty of useful things. All that’s inside is a time bureau manual, a bag of Behrad’s weed gummies, and a note from Rory saying he took the spare portal on a beer run. And frankly good riddance.

Sara desperately tries to keep their spirits up since her partner in time travel is devolving quickly. They try to figure out all they know about 1925 and what they can do about their predicament, and Ava finds a protocol in the time bureau handbook (TBH) that says they should just stay put. 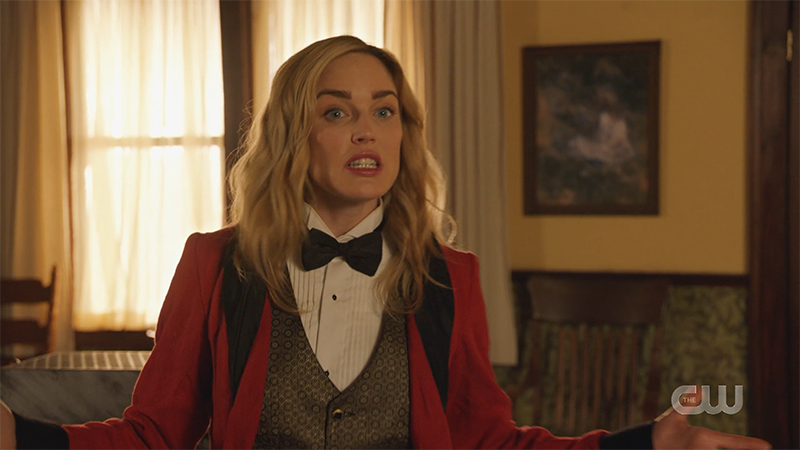 Sara says if they’re going to be here when folks arrive for a show, they better be ready to put on a damn show. Astra still hates this plan so she sneaks off again, and Spooner tries to explain to her mom what is going on when Gloria comes home to a lot of shenanigans going on in her living room. She’s a little surprised to hear that she’s hosting a circus, but she’ll accept any trouble that comes from it if it means protecting her little girl.

Spooner realizes what all this unwanted attention will do to her mother and decides to call the whole thing off. Sara hears her and apologizes and says they’ll just skip town instead. 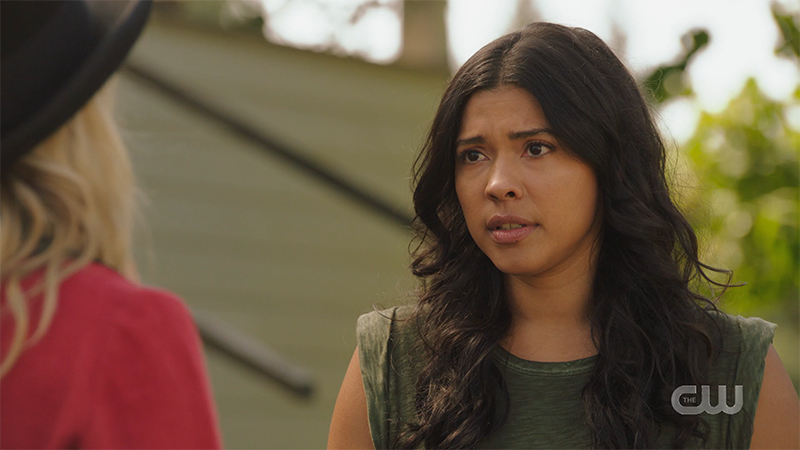 We stan a leader who listens to and respects her team.

That settled, Spooner looks around for her #1 and realizes Astra is gone. Gary is the first to find her, and she’s using magic to try to put the Waverider back together. Gary recognizes it as a resurrection spell and warns her against it, but she’s trying to be stubborn like her mentor.

Meanwhile, in town, the Sheriff sees a picture in the paper of the real Hoover and realizes he dealt with imposters, and before you know it the real Hoover is at his doorstep, saying he suspects the Midland Gang, a band of bank robbers he’s been after.

Valerie has written 381 articles for us.