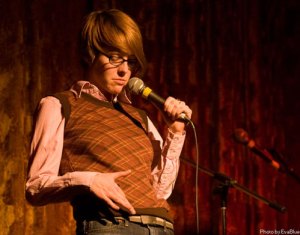 Maybe you know DeAnne Smith from Last Comic Standing or that time Crystal interviewed her about her shiny hair or last week when she forced you to imagine her topless. Wherever you found yourself becoming acquainted with DeAnne Smith, chances are you’re ready to see her being funny IRL and probably you’re willing to pay money for this experience.

HEY DO YOU LIVE IN AUSTRALIA NEAR MELBOURNE because if so, you’ll have your chance to see DeAnne LIVE AND IN THE FLESH via the Melbourne International Comic Festival March 31 – April 24. Tickets for her show, About Freakin’ Time, are on sale and you need to buy yours nownownow while you’re still young and beautiful.

Have you seen this video? It’s been on youtube for almost two years what the hell have you been watching if you haven’t watched this? Jesus.