Holy wow, lovely dew drops, it’s June! June in the year 2015, which makes it — for a certain subset of the population including me, my friends, my soon-to-be-new-bar-friends, and at least one of your friends if not you yourself — Women’s World Cup month. A little behind on your Women’s World Cup news? Coming in fresh-faced and need a primer? Read on, players, read on. 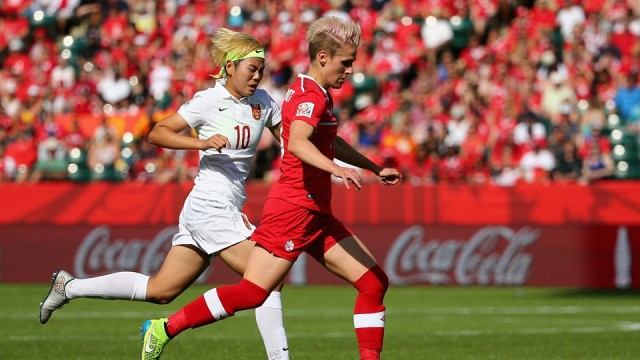 All right, I get it if your schedule can’t accommodate all the games, and maybe you want the highlighted Cliff Notes. In that case, check out the top ranked teams going into the tournament: Germany, USA, France, and Japan. Pia Sundhage, who coached the US team to two Olympic gold medals and runner-up in the 2011 World Cup, returns to the World Cup as the head coach for fifth-ranked Sweden. Canada, the host team, is tied for eighth with South Korea, and England and Brazil rounding out the top 8. Marta is still playing for Brazil, though the team has been suffering a lot of injuries lately, France has been looking good since the Algarve, and as for Team USA, I’m so outrageously patriotic for this team I cannot say anything with journalistic integrity about it.

But ranking are just rankings! So many other things go into making a game interesting: upsets always happen, playing styles clash, etc, which is why I advocate watching as many as possible. The game has changed since the early days of the Women’s World Cup. While America was known for its physicality and former domination, the rest of the world is catching up and finding ways around that physicality. This will be the first World Cup appearance for eight teams — Ecuador, Costa Rica, Spain, Netherlands, Switzerland, Ivory Coast, Cameroon, and Thailand — and some of their styles are a bit of a mystery to the rest of the tournament. Norway may have won decisively in their first matchup against Thailand, but Thailand was unexpectedly fast and still fun to watch. 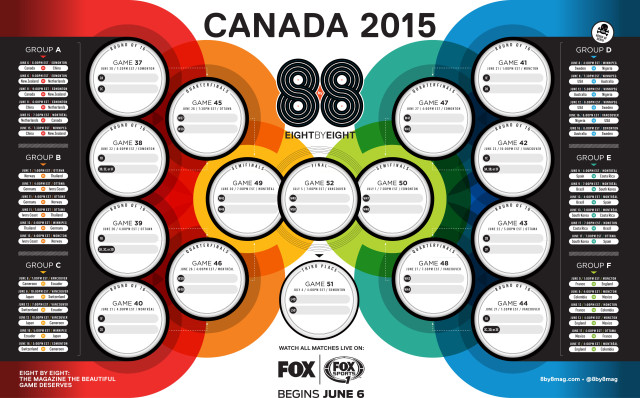 via Eight by Eight, click through for a bigger version

I was raised around college basketball, and I am SKEPTICAL about the integrity of this type of bracket. I mean, I can make sense of it, after a fashion, it bears some resemblance to the thing I know, but. Well. They do things differently in different sports. In the FIFA bracket, the qualifying teams are randomly assigned to six groups of four. Each team in the group plays each other, earning 3 points for a win, 1 point for a tie, and no points for a loss. At the end of group play, the top 3 point-scoring teams advance from each group, and then they’re placed in a playoff-style bracket with the rest of the teams. (ETA: it’s been pointed out that this means 18 teams advance, which is not the case! I messed up! It’s the top 2 point-scoring teams from each group, and then the top 4 point-scoring teams from the rest.) Okay! So what does this mean for your team?

Well, position coming out of group play determines a lot. Clearly, ideally, you want your team to emerge at the top of the group, and have to face the third-ranked team from another group. For a team like Japan, in a group with newcomers Cameroon and Ecuador, I’d peg their chances of finishing at the top at like, 95%. For a team like the US, in Group D with the tougher opponents, it’ll be harder to secure the top position (Group D is unofficially the Group of Death for a reason). If Team USA ends up second, they’ll likely face a challenging Brazil. If USA ends up first, though, they’ll face a much easier third-place opponent. Hopefully, we’ll follow statistical predictions, but soccer’s full of surprises.

Like a March Madness bracket, this setup means that some matchups may be impossible. Like, I’d love to watch USA play Canada, but they’d both have to make it to the finals for that to happen.

All About That Turf

Regardless of national affiliation or preferred style of play, there’s one thing pretty much everyone can agree on when it comes to this World Cup: the turf. Y’all, the turf! That damn turf! Let me tell you that turf is no good! For the first time in history, all of the these World Cup matches will be played in stadiums with artificial turf as opposed to natural grass. There’s no definitive study on the differences between playing on turf and grass, but players from multiple national teams have voiced opposition to turf — citing greater chance of injury (turf is a harder surface, which is more unforgiving on sliding tackles and game-long runs), longer recovery time on injuries, and inconsistent ball behavior. There’s also a correlation between goalkeepers who have been diagnosed with cancer and who also play on turf, though causation hasn’t been established.

In 2014, a group of over 40 international’s women’s players filed a lawsuit against FIFA, citing gender discrimination. Men’s World Cup matches have always been played on grass, and 2018 and 2022 World Cups are also set to be played on grass. What’s more, The Scott Company in Canada offered to seed the fields with grass for free, if cost were the objection, and FIFA (shifting some of the responsibility to the Canadian Soccer Association) declined. Ultimately, the lawsuit was subject to innumerable delays, several players were pressured to withdraw by their home national federations, and the group had to withdraw the suit altogether. Abby Wambach, the leader in international goals scored for men and women soccer players and a member of the suit-bringing group, noted that they lacked leverage — national men’s team players can afford to threaten boycott in the unlikely event that they’d be forced to play on turf, while players on the women’s teams couldn’t.

Now that the tournament has started, we can see directly how this particular turf is affecting players. On the day of opening matches in Edmonton, the average air temperature was around 75 degrees Farenheit, but the playing surface itself reached 120 degrees (natural grass would’ve stayed cooler than the air). That’s only two degrees below the temperature deemed “unsafe for sustained athletic use.” Prolonged skin-on-turf contact could cause burns at that point. Whether teams are holding back on sliding tackles or their plays affected by ball bounces — we’ll see as they play more games.

As I’m writing this, the USA is in the middle of its first game against Australia, and I just came off the really exciting Nigeria-Sweden match. Since Saturday, Germany, Canada, Netherlands, and Norway all won their opening matches. It’s been a great few days of play so far, and I suspect it’ll only get better. Let me know your thoughts on the tournament so far!