If you’ve been jonesing for your daily dose of dapper, we’ve got just the fix. dapperQ’s He Said/We Said is back, right in time for Pride! For a quick refresher, check out the New Year’s post and last year’s retrospective as well as creatress mastermind Anita Dolce Vita‘s plan behind the magic: 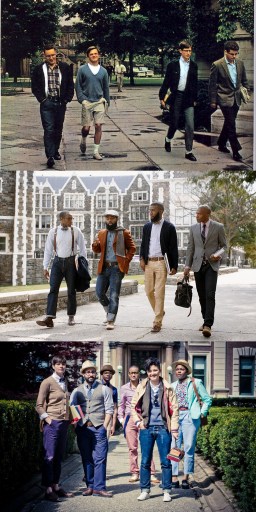 Published in 1965 by four Japanese style enthusiasts, Take Ivy, a collection of photographs shot at Ivy League campuses across America, is often considered to be the bible of Ivy League style. Not only did the book set off an American Ivy League fashion craze among students in the trendy Ginza shopping district of Tokyo, it has become an American cult phenomenon and sells for up to $2000 a copy on E-Bay. (Interestingly, one of the models for this edition of HS/WS, Rachel Rudy, brought a personal copy of the book to the shoot!) While some firmly believe that Take Ivy is the definitive document of American Ivy League menswear, others, such as Joshua Kissi and Travis Gumbs, founders of the menswear blog Street Etiquette, have noted that the book documents a primarily white experience; there was only one black student featured in the entire book.

So, in the spirit of Take Ivy and Black Ivy, photographer Bex Wade, a group of dapper queers, and I headed up to Columbia University in New York City to capture images documenting queer Ivy style, adding to the bank of images defining and representing Ivy League menswear.

“(Night Time Is) The Right Time” by Ray Charles

Prince followed by Rihanna’s. Prince is the epitome of androgyny and I would love to steal his key pieces and emulate his style. And, well, Rihanna is a fashion rebel and utterly sexy. I’d thoroughly enjoy finding items I’d adore in her closet and letting her dress me.

My ankh necklace. It means “eternal life.” It was a gift from my mother from about 10 years ago and when I can’t be right up under her or hugged by her, it’s nice to carry something she got for me that goes with absolutely anything and everything that I wear. 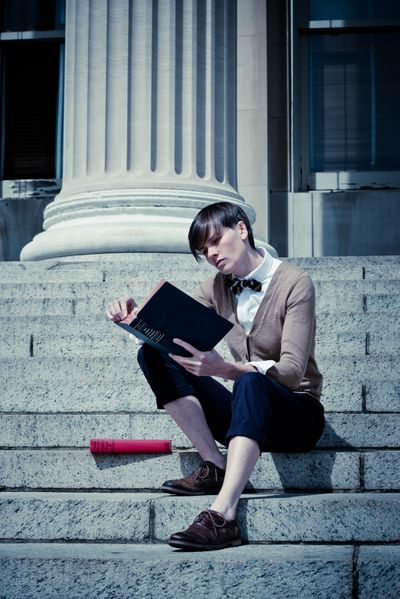 Squatting down behind the hedge with Bex directing us to jump while yelling, “Just don’t get hurt and sue me. I know you Americans love to sue people!!” Oh, and also learning about the regional availability of Honey BBQ Cheetos.

Russell Manley, the owner of the barbershop on Ludlow Street next door to the bar where I used to work. Google him. He’s a local legend.

For wardrobe staples, I love the little boys section of Brooks Brothers. But most of my favorite things I’ve found at thrift stores or been given by people I love. 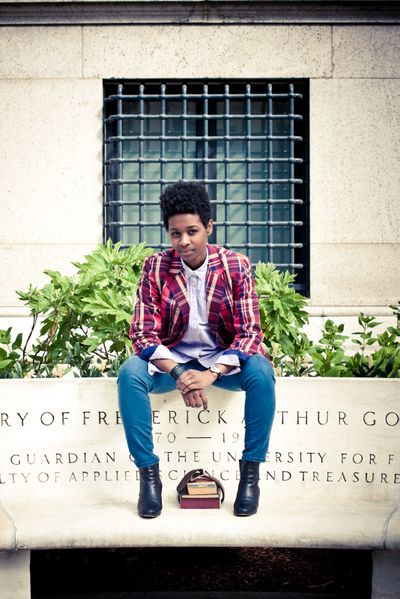 “I’m A Lady” by Santigold

When a group of students kindly interrupted the shoot to compliment us and asked if they can use our image for their photo shoot, as our look/style caught their eye. This was completely flattering. This goes to show that an image is very influential, or as the students stated, “Keep styling and profiling!” Haha, love it!

Beacon’s Closet and Buffalo Exchange. I’ve encountered these thrifty stores a few years back, and boy was I glad I did! Because, I have always felt that your typical yet known retail stores, as they are sectioned for mens/women, never quite did it for me. I’ve always felt restricted with limited options. Whether being that the women’ section was too “girly”, or the men’s section, where even though I love/admire the pieces of clothing, when it comes down to the reality of it, the clothing just wouldn’t fit! Therefore, in stores like Beacon’s Closet and Buffalo Exchange, I have the “luxury” and freedom to express and select my style in an environment of no labels, as this is how I personally describe my image.

Why? My Black leather wristband, as well as a black or blue Blazer. The leather wristband is an item that I brought on a trip to the Caribbean several years ago. I think it simply provides an edge factor to all my looks. A Black/Blue Blazer is also one of those items in my closet that can transform casual-wear into a formal/business casual look.

Andre 3000 because I feel like I could get the clothes of other stylish men in a variety of stores whereas this guy, this guy’s wardrobe has got to be one-of-a-kind.

Why? My glasses. Aside from the fact that I need them to see, they’ve really just become part of my face. 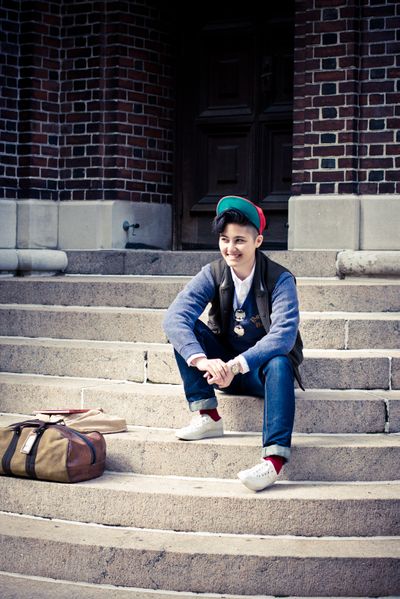 Age: 24
Occupation: I’m a professional Watson-about-Bushwick and I bartend/party at Wreck Room, especially on Thursday nights

He Said/We Said was a really nice way to spend a sunny Saturday with good-looking strangers while getting to play dress up and make friends. I won’t lie, I like clothes and friends. Thanks for thinking of me for the shoot. I had fun, even though I felt a little green.

My Take Ivy book, for this shoot at least. 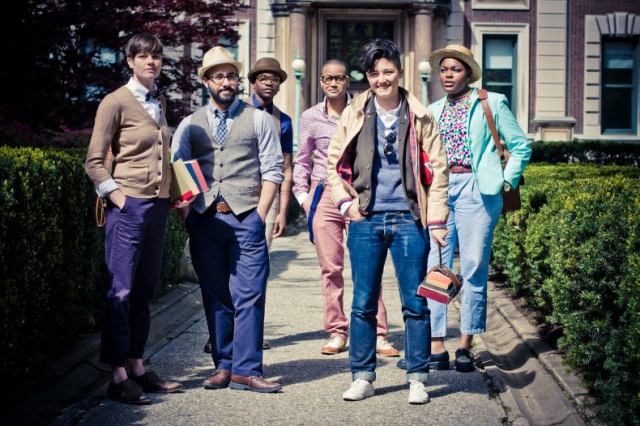 I enjoy thrifting; it allows me to appreciate garments that I may never see again and happen upon a treasure, like Chanel shorts for 50 cents. I also thoroughly enjoy Zara.

Tell us a bit about your favorite moment(s) from the shoot.

The introduction to the many beautiful faces was my initial favorite moment. Then a random conversation about useless bee facts dissolved into meaningless banter about Cheetos Honey BBQ Puffs and how amazing they are became an instant hit.

I happened upon this opportunity. I was honored to be asked on the spot to be a part of this project. The vibrant energy, radiant day, and have these moments documented. It allows for an opportunity for being from varied backgrounds to come together collectively and exist in a nest of magnificence.

I can’t live without a fun pair of socks. Because I think sock choice says a lot about a person! 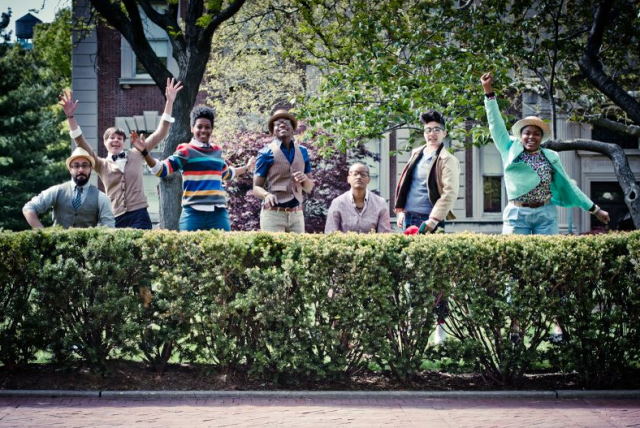 Don’t forget to check out DapperQ next week for a behind-the-scenes look at the shoot!