Hello and happy Halloween! Recently, the internet fairies bestowed upon the earth a new episode of everyone’s favorite web show, “My Drunk Kitchen.” This one is about candy and involves no cooking, at last proving that I would watch Hannah Hart talk about nothing for five and a half minutes. 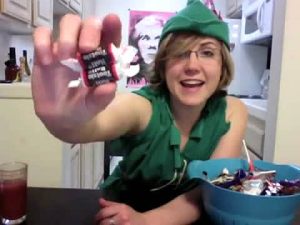 This is the candy people ate when they didn't realize that candy could be good.

Harto highlights include but are not limited to:

+”This is unfamiliar to me somehow.”

+A guest appearance by Jenna Marbles

Her glasses come off less than halfway through this hot mess, so you know it’s a good one.