Crowdfunding platform GoFundMe has been in the news a lot recently for the controversial campaigns that it allows, including a fundraiser for Darren Wilson, the Ferguson police officer who killed Michael Brown. Last week, it pulled a number of campaigns, saying that they contained “subject matter that GoFundMe would rather not be associated with.” One of the pages taken down belonged to a Chicago woman known as Bailey, who used the site to raise money for an abortion, as she felt financially unable to support a baby and the pregnancy was developing complications. 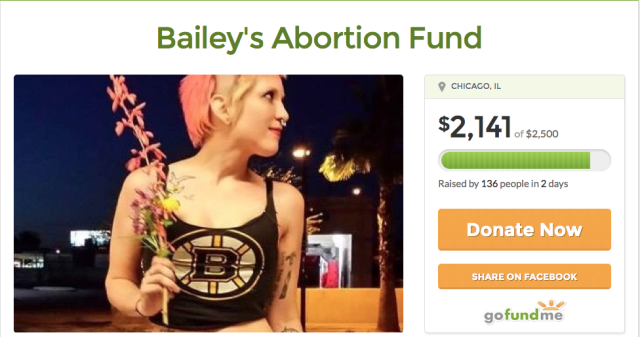 This week, GoFundMe took its decision a step further and issued a revised content policy that put a blanket ban on campaigns that are “associated with or relating to” abortions. What’s more, on the list of banned content, abortion isn’t listed as a medical campaign, but as a “Termination of Life” campaign, the same distinction made by anti-choice activists. The policy has so far been selectively enforced. As of today, there are still over 100 active campaigns for abortion-related causes, most of them anti-choice. In a statement to Salon, GoFundMe said that it doesn’t intend to place “restrictions on a pro-life or pro-choice group’s ability to fundraise for rallies or protests.” It also tried to explain away any political implications behind the policy, saying that it intends “to protect our brand from certain materials and subject matter whose proponents span the political spectrum. For example, GoFundMe may not be used to fund an abortion or to purchase firearms,” as though the two are equitable causes.

Along with obvious bans on criminal acts and illicit drug use, the policy prohibits campaigns that involve gambling, sorcery, “bodily mutilation,” marijuana and anything in “the adult industry.” It reveals a moral stance that narrowly defines the “positive environment” GoFundMe seeks to foster. For what it’s worth, in proactive accordance with its ban on “criminal defense funds relating to violent, hateful or sexual acts,” GoFundMe also shut down a campaign for Daniel Holtzclaw, the Oklahoma City officer accused of sexual assault against a number of Black women. GoFundMe did forward the money that had already been raised to both Bailey and Holtzclaw, but keep in mind that it also keeps 5% of every donation. As of now, Darren Wilson’s page for his concluded campaign is still up. GoFundMe may have the tagline “Crowdfunding for Everyone!” but in the past week it’s made clear exactly what kind of respectable “everyone” it would rather associate with — and the fact that it seems to consider a legal medical procedure less respectable than the killing of an unarmed boy.