Sometimes — often, even! — you want to eat a delicious homemade brunch in your own kitchen, but the actual making of brunch turns out to be an insurmountable obstacle. If you want to eat by 10:30 am on Sunday it means getting up at like 9, and you’re kind of hungover and somebody spilled beer on you last night and also you had that dream where Raven-Symoné didn’t like your haircut, so it’s just not going to happen.

The solution to this problem is to have Past You make the brunch so Present You only has to move some bowls around and turn on the oven and is eating within 30 minutes of turning on the coffee maker. It’s going to be your favorite thing Past You has ever done for you, even better than the time Past You changed your ex’s name in your phone to Seriously Don’t Text Me For Real.

A note: these recipes are all going to be vegan because otherwise I wouldn’t be able to eat them, but I promise the carnivores it’s gonna be JUST FINE CALM DOWN. Just use real cheese or butter or meat where I don’t. When it comes to eggs, you’ll be able to figure it out. Okay let’s go.

Quiche is the perfect make-ahead food because it stays good for a surprisingly long time and is even good at room temperature, so reheating it isn’t even required. It has multiple food groups in it, and depending on how you make it (I’m looking at you, Mom’s traditional recipe that calls for like two cups of heavy cream) it can be the secret nutritional powerhouse of your brunch. I’m using a variation on this recipe. 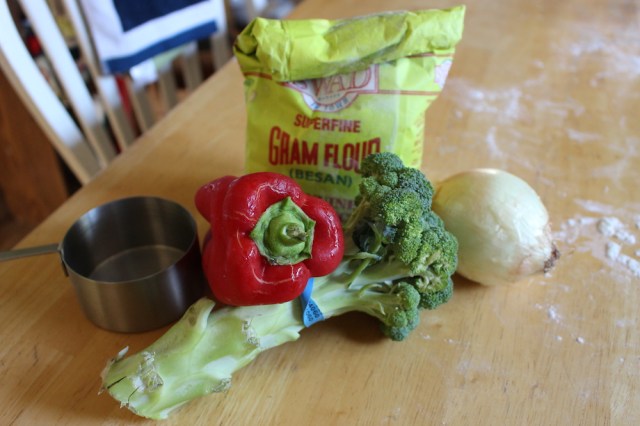 (If you’re not vegan, ignore everything after the bell pepper and use about 6 eggs and about a cup of milk. You can figure it out, it’ll be fine.)

1. Roast the broccoli at 400 F for 20 minutes or so, until cooked through and caramelized. Sauté the onion and bell pepper until caramelized. If there are any other veggies or fake bacon you want, now’s the time to cook them. 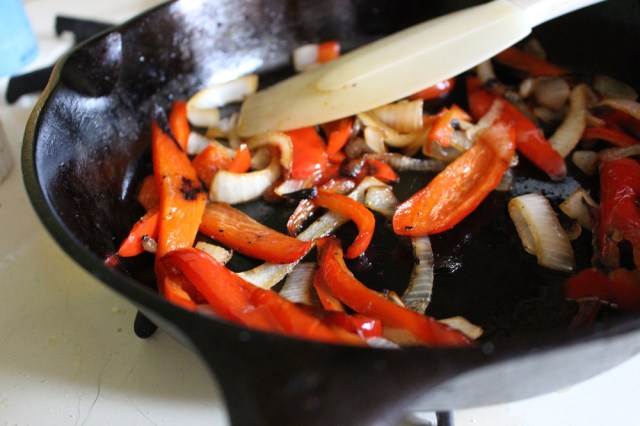 2. Prick some holes in the bottom of your piecrust with a fork and bake it empty for 15 minutes at 375.

3. In a bowl, mix the chickpea flour and one cup of water together, and set aside. Bring the rest of the water to a boil with the buillion, nutritional yeast and spices. Once the water is boiling, pour in the chickpea flour mixture while stirring. Lower the heat and keep stirring for a few minutes until the mixture is very thick, then turn off the heat.

4. Add all your veggie situations into the chickpea situation. It will be hard to stir but I know you can do it. Pour into the piecrust and use a spatula to smooth the top. You can decorate the top with slices of tomato or caramelized onions or cheese or whatever your little heart wants. 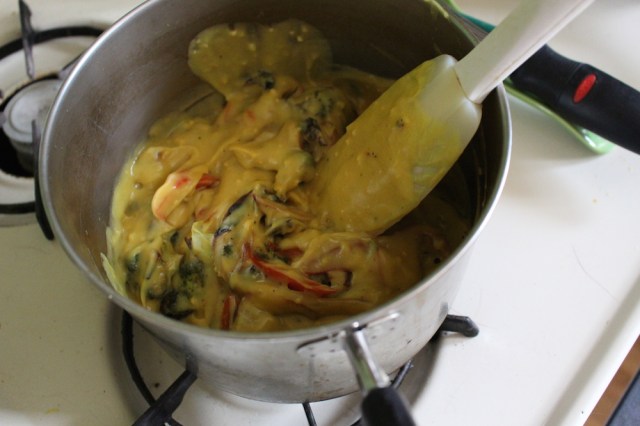 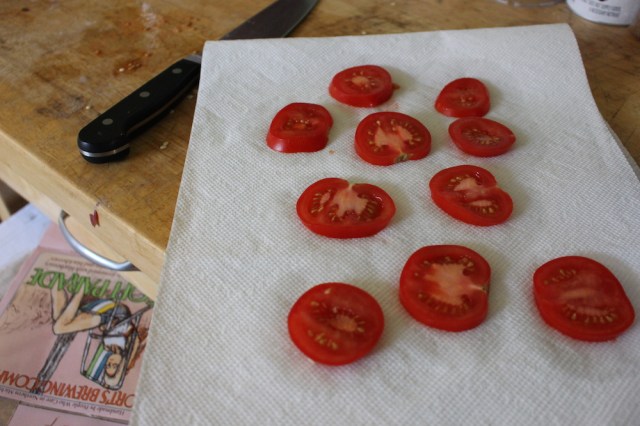 Setting tomatoes on a paper towel to soak up their liquid so the quiche doesn’t get soggy!

5. Bake at 375 for 20 minutes. At 20 minutes, brush the top with some melted vegan margarine (maybe not if there’s cheese on there, though, that might be weird). Put back in for 5 minutes.

6. Allow to cool and then put in the fridge.

1. Take out of the fridge. Seriously that’s pretty much the whole process. It would be good to take it out right away so it can warm up to room temperature, but whatever. You can also cut a slice and microwave it or put this whole puppy back in the oven if you feel like it. 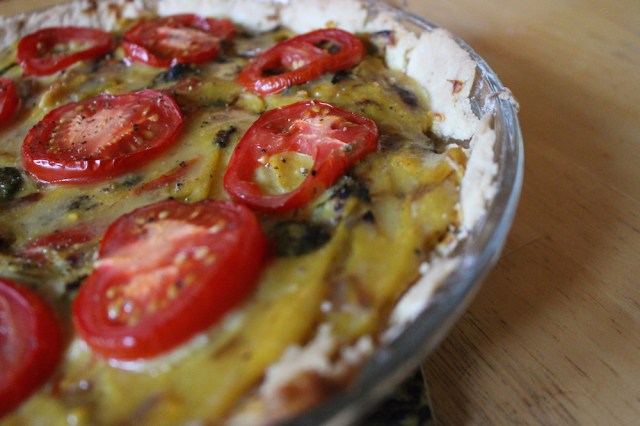 Breakfast potatoes aren’t ideal make-ahead food, but in my opinion they are integral to brunch and leaving them out isn’t an option.

1. Chop up your potatoes into cubes — 1/2 inch to an inch is ideal, but do you — and put them in a bowl. Also in this bowl you’re going to put enough salted water to totally cover the potatoes. The water keeps the potatoes from browning and also does something to the starch that makes them crispier, and the salt in the water seasons them from the inside. Cover this bowl with cling wrap and put it in the fridge.

2. Chop up your bell peppers and onions and any other veggies you want and put them in a tupperware, and also put that in the fridge.

3. If you’re feeling very motivated, you can measure out the spices that you want to use on your breakfast potatoes — garlic salt? cumin? paprika? — and put them all into a ziploc bag now. Just one less step tomorrow. 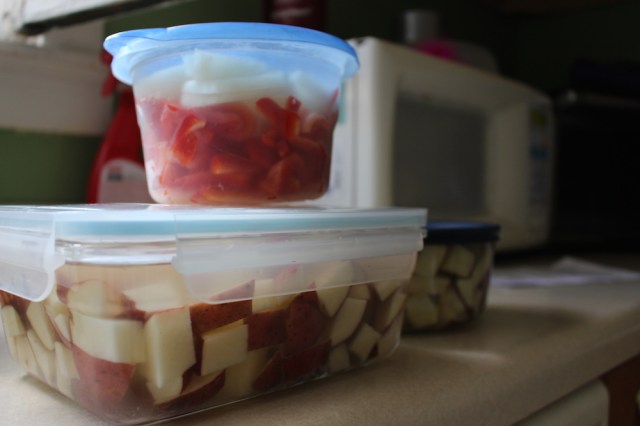 1. Take out your potatoes and drain them in a colander. If you’re feeling really enthusiastic and have a lot of time, you can re-soak them in a new batch of cold water for 20 minutes, which will apparently make them even crispier. If not, not a big deal. Either way the important thing is that the potatoes end up really dry — I usually roll them up into a dishtowel like a burrito to get them extra dry, because that’s what will get you a really crispycrunchy outer potato layer.

2. Here, two paths diverge in a yellow wood. You can either bake your breakfast potatoes or fry them. They both have pros and cons. Baking means that you get to be less involved; you kind of just put them in the oven and let them do their thing. However, frying means that you have the oven freed up for other things, like cinnamon rolls and reheating quiche, and also frying things is delicious. Your call.

3. If you are baking your potatoes, put them in a bowl (can be the same one, I don’t care) along with your chopped veggies and spices. Drizzle some oil on there and toss until everything is coated. Spread out on a baking sheet in one layer if possible and bake for 30 to 40 minutes at 450 F. It’s good to open the oven and stir them with a spatula every once in a while.

4. If you are frying them, put some oil (a lot of oil, we’re not making a salad) in a pan (preferably cast iron) and turn to medium-high heat. Once the oil is hot, toss in your potatoes, veggies and spices, stirring til everything is coated. Move things around once every ten minutes or so until the biggest pieces of potato are easily pierced by a fork. It’s imperative not to stir too often — that’s how you get mushy potatoes. I know it seems like they’re gonna burn but they’re not. Unless they do burn, in which case just turn the heat down a little. 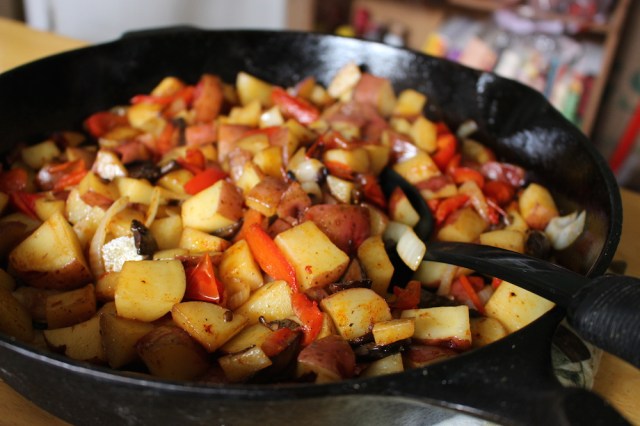 Obviously I belong to the frying camp.

I’m usually not about sweet foods at breakfast, but can you even deal with how impressed your sleepy hungover friends are gonna be when you whip out HOMEMADE CINNAMON ROLLS after a long night of OINTB marathoning? 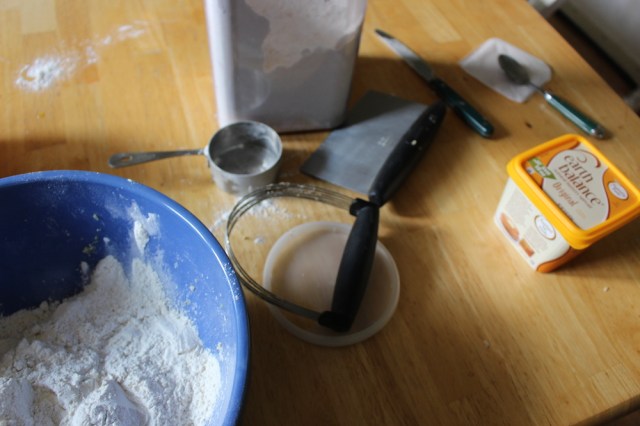 1. Stir the yeast into the warm water to proof. After a few minutes, combine the yeast mixture with the eggs, butter, sugar, salt, and half the flour. Add in just enough of the remaining flour to make a soft dough; you may not need all of it. Don’t knead it like bread or overmix it. Set aside covered with a kitchen towel to rise for an hour.

2. In the meantime, mix the cinnamon and sugar together. After the dough has risen, divide it into two and roll half the dough out into a rectangle (allegedly 18×12 inches? Whatever). Spread half of the remaining 1/2 cup of butter onto the dough rectangle, leaving a 1/2 inch margin at the sides, and sprinkle on half the spice mixture. If you want to add any nuts or raisins or anything, now is the time. Roll the dough up from the long side until it’s a sort of log, and then chop into 12 discs. Rinse and repeat with the other half of the dough and filling. 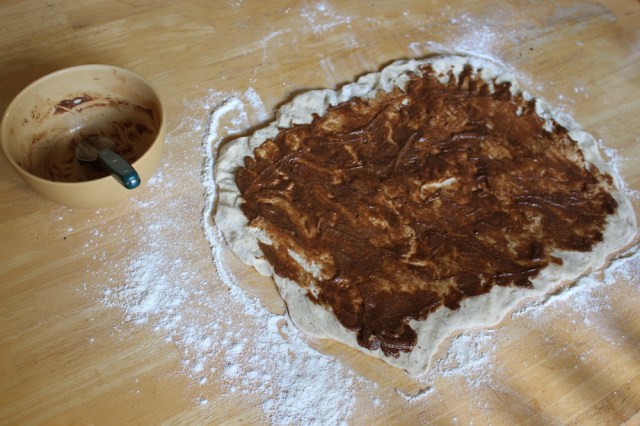 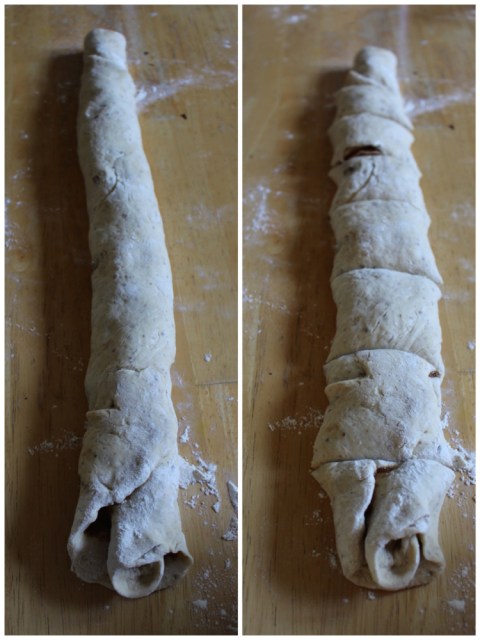 3. Take a baking dish or two and oil the inside of them, and then place the cinnamon rolls inside them. They won’t look that much like cinnamon rolls yet but that’s fine. Cover the baking dishes with cling wrap and stick them in the fridge.

4. One last thing! Mix the confectioner’s sugar, milk and vanilla together in a bowl with a fork, and cover that and put it in the fridge also.

1. Preheat the oven to 375 F and grab the rolls out of the fridge; bake them for 20-25 minutes or until they’re starting to brown.

2. While the rolls are still warm but not too hot, give the glaze another stir and then drizzle it over the rolls with a spoon. 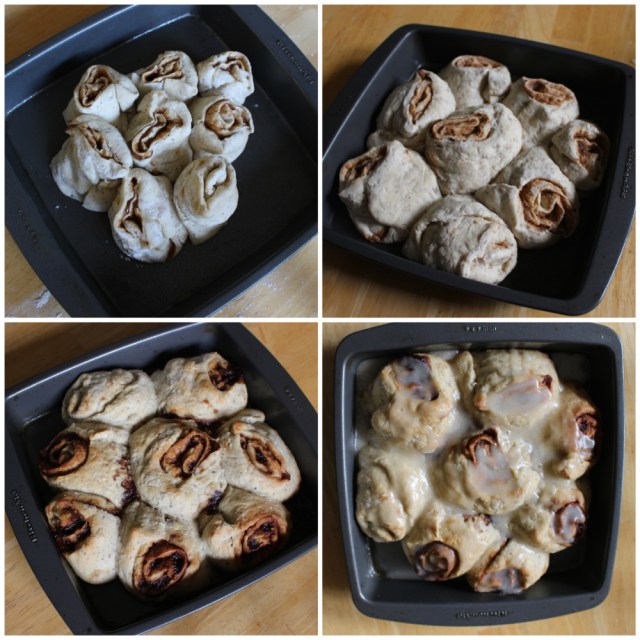 The miracle of life/rising dough. 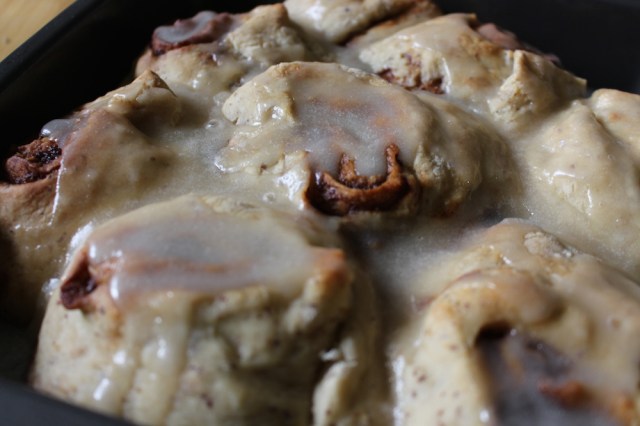 This is so stupid easy it’s not even a recipe. Buy a bunch of fruit that you like and chop it up and put it into a bowl, and then put that bowl in the fridge overnight. Maybe try to avoid any super soggy fruits like raspberries. Or don’t, whichever. 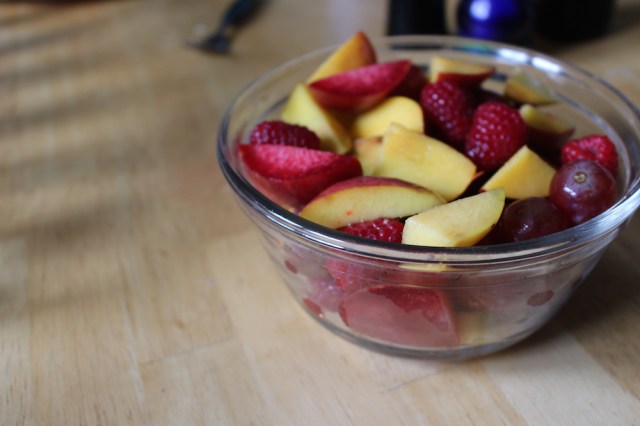 Now you’re free to sit back, put some food in your face and/or the faces of others, and reflect on your excellent life choices. 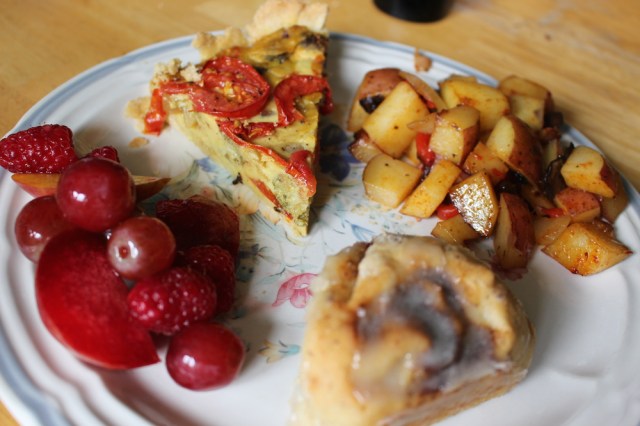 Runner-ups: the obvious thing to include here would have been crockpot overnight oatmeal, which is an excellent foodstuff. It did not make the cut because let’s be honest, oatmeal is for breakfast, not brunch. No one has ever nabbed a girlfriend by offering her oatmeal the morning after.