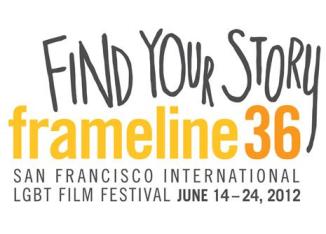 The San Francisco International LGBT Film Festival, founded in 1977, is the biggest bestest most spectacular LGBT film event in the entire universe. For example it is the “largest,” “longest-running” and “most widely recognized.” It’s put on by Frameline, an LGBT media/arts non-profit, and it’s happening this week in San Francisco, from June 14th through June 24th. There are so many amazing movies being shown this year, from old classics like Cheryl Dunye’s Watermelon Woman to hotly anticipated debuts like Jeffery Schwarz’s documentary Vito and foreign-lesbian-films-you’ve-been-reading-about-on-AfterEllen like Kiss Me and Bye Bye Blondie.

Of course, not everybody lives in the Bay Area, which is unfortunate as I’m really dying for some nice lesbian to move here and open a convenience store in the abandoned building next to mine, ideally one that sells cream, Teas Tea and quarters. Anyhow, if you’re not in the area, I’ve helpfully included information about where you might be able to see these films some other way before they eventually come out on video. Sidenote did you know that Wolfe Video, the Leaders and Creators Of Lesbian Movie-Land, just started an On-Demand service? You can watch Tomboy tonight! You’re welcome.

Out of Town: Mosquita y Mari comes to Los Angeles on July 19.

I know, I know, enough already from the European senior citizen transwomen! Let’s hear somebody else’s story for once, amirite? I swear, every time I turn on the television it’s another French transwoman over the age of 65 talking about growing up trans in the mid-20th-century. JUST KIDDING. I know literally not one thing about the subject of this movie, and chances are good you don’t either, which’s why we all need to go see it.

They are all women of a certain age; blue-haired ladies using canes, well-preserved sixty-year-olds walking small dogs in the park, or aging beauties meeting old beaus for a posh lunch. And they all have one thing in common: Dr. Georges Burou, who in the ’60s and ’70s operated a clinic in Casablanca where he performed groundbreaking sex-change surgeries.

In this beautifully photographed documentary, five transwomen reflect back on their lives as women, and the various paths that led them to surgery. In a mixture of interviews, home-movies, and scenes of their daily lives, we hear their stories.

…Claudia’s search for this personal growth takes her to a magical Berlin queer sex club for an exceptionally submissive encounter with two transguys who help Claude discover gender bending and his true capacity for giving up control. Meanwhile a surprise visit from Dylan’s mother (the divine Maggie Tapert) creates additional dramatic complexities as she escapes her sexless marriage with Dylan’s father and embarks on an out-of-town fling with the handsome and ever attentive hotel clerk, Claude.

The director of Loving Annabelle was struggling with depression, addiction and years of suppressed trauma — as well as the after-effects of working for years on reality television programs like The Real World and The Simple Life — when she decided to hit the road in search of renewing human interactions, which is when humans talk to other human beings face-to-face in three dimensions. So she posted about her mission on facebook, and the first 50 of her 5,000 Facebook fans to respond made it onto Kat’s Face 2 Face van-trip itinerary, which spanned 11,000 miles around America. Sounds cool, right?

It’s Thailand’s first lesbian romance movie and basically it looks so cute I can hardly stand to not be watching it this moment and all ensuing moments. Ostensibly heterosexual Pie’s new college roommate is a mega-cute ukelele-playing tomboy named Kim, who hasn’t really staked out her own sexuality quite yet. What happens next? GUESS YOU’LL HAVE TO WAIT AND SEEEEEE

Watch Audre Lorde in action with the students at the Berlin Free University, where she changed the lives of everybody she touched with her “irresistible revolution”:

Dagmar Schultz, Lorde’s German publisher, colleague and friend has crafted a lyrical, humanizing snapshot of the iconic writer for the twentieth anniversary of her death in 1992. Through lectures, discussion groups, and intimate journal-like audio entries, Lorde’s forceful, captivating personality shines through.

Out Of Town: Audre Lorde – The Berlin Years is coming to Berlin on July 4, Broooklyn on July 7, Oakland on July 7, Philadelphia on July 18 and August 2, New York City on August 10, Honolulu from Sep 20 -21, Berkeley on Sep 25, Sonoma State University on Sep 27, Lausanne, France on Sep 29, San Francisco on Sep 29, Chicago on October 2 and October 4, Cambridge on October 9, Amherst on Oct 11 and New York City on October 15.

The most important thing to know about this movie is that Jessica Clark is in it. Secondarily, the plot: Barbara Niven plays a bored wealthy wife/mother who hates her husband (John Heard) and has never had an orgasm. Her lesbian friends hook her up with a high-class call-girl named Paris, played by Jessica Clark:

Rebecca could never have known that through Paris, she would discover answers she’s been searching for her entire life. Her journey from perfect control to unbridled passion allows Rebecca not only to reclaim worthless years, but to redeem and vindicate painful regrets. Raw, evocative and often humorous, “A Perfect Ending” explores one woman’s struggle to find what moves her and asks: Without passion, what’s the point?

Out of Town: A Perfect Ending comes to Los Angeles on July 15th and Philadelphia on July 21st.

Indonesia has the largest Muslim population in the world and it’s not particularly okay to be gay there. The film, which weaves together first eight different stories, is the first film by queer women about queer women in Indonesia!

We meet Dian, who lived on the streets because she was thrown out of the house for being a lesbian. After a harrowing period of harassment and torture by police and a male religious group, she now lives a more stable life as a law student. Others describe the insidious psychological violence from within their own kind. A lesbian applying for a job dramatizes the probing, invasive questions that can destroy her chances at employment. Edith describes her gradual transformation from jilbabed (veiled) Islamic devotion to a “mind boggling” philosophical epiphany that paralleled her growing affection for another woman. We see lesbians searching for their identities among adopted families, chatrooms, dance clubs and shopping malls.

Out of Town: Children of Srikandi comes to Rio de Janeiro from June 29th-July 8th, Oldenburg (Germany) on July 4th and LA on July 18th.

This movie spawned my then-bisexual awakening and pretty much changed my life forever. The fact that Frameline is screening it this year means that there must be other people out there like me who would seriously consider trekking into the city at 11am on a Wednesday morning to see a movie they already saw in theaters when it came out and now own on DVD, which makes me happy to be alive.

Out of Town: You can get it on DVD!

10. Mississippi I Am, directed by Harriet Hirshorn, Katherine Linton

This documentary has been making major buzz on the festival circuit and is one of this year’s most anticipated features. It’s about Mississippi, surprise! Generally, Mississippi isn’t exactly a bastion of tolerance, and it’s super Bible Belt, but what the filmmakers found when they set out on this project was that the youngsters of Mississippi are fierce warriors of love changing the world forevermore. Constance McMillen and Lance Bass are in it!

Out of Town:  I don’t know, but it seems like it should be everywhere based on the amount of press it has been getting. It’s not on their website…