As I’ve mentioned before, I’m completely smitten with Pussy Riot. Punk rock feminists are foxy enough, but to be outspokenly so in Russia’s current political climate is even more fierce. For some perspective of the degree of the current clamp down on civic freedoms, Moscow just banned gay pride marches for 100 years. There are currently massive protests in the streets of Russia against President Putin who is now serving a third term, despite risk of fines amounting to more than many make in a year and increasing crackdowns on protestors. 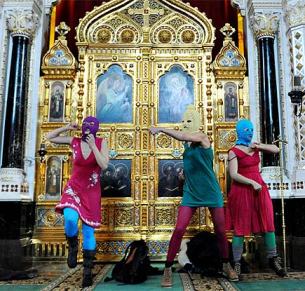 It is in this climate that the group Pussy Riot performed the following Punk Rock Prayer in late February:

(end chorus)
…
Black robe, golden epaulettes
All parishioners crawl to bow
The phantom of liberty is in heaven
Gay-pride sent to Siberia in chains

The head of the KGB, their chief saint,
Leads protesters to prison under escort
In order not to offend His Holiness
Women must give birth and love

The Church’s praise of rotten dictators
The cross-bearer procession of black limousines
A teacher-preacher will meet you at school
Go to class – bring him money!

Patriarch Gundyaev believes in Putin
Bitch, better believe in God instead
The belt of the Virgin can’t replace mass-meetings
Mary, Mother of God, is with us in protest!

(Three weeks after the protest performance, these three alleged members of the group were arrested: 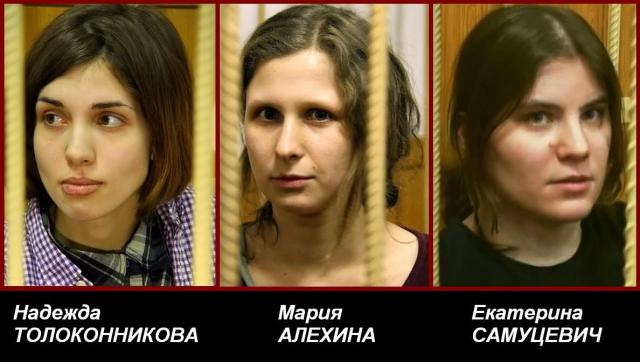 As evidenced in the video montage of the events during the protest on February 21st, masked members of the band Pussy Riot performed the Punk Rock Prayer in Moscow’s Christ the Saviour Cathedral. Three weeks later three alleged members of the group were arrested on charges of “hooliganism.” Verzilov, a 26-year-old married to one of the arrested women, Nadezhda Tolokonnikova, 23, spoke with CNN about why the group is protesting Putin and the Russian Orthodox Church:

Officially it’s supposed to be separated by the constitution, but in recent months the Russian Orthodox Church has become like a supportive propaganda machine for the Kremlin. The patriarch, the head of the Russian Orthodox Church, he is a man who enjoys the development of a very close political relationship with Putin. The text of the song was pointing out that Patriarchate doesn’t believe in God but he believes in Putin.

In the months following the arrest, both the international human rights community and grassroots feminists organizations have responded to the jailing of these three women. Amnesty International released a statement on April 3rd criticizing the arrests:

Even if the action was calculated to shock and was known to be likely to cause offence, the activists left the Cathedral when requested to do so and caused no damage. The entire action lasted only a few minutes and caused only minimal disruption to those using the Cathedral for other, notably religious, purposes.

The broader political context surrounding the anti-Putin protests at the time – and the anti-clerical, anti-Putin content of the activists’ message (themselves unpunishable) – have clearly and unlawfully been taken into account in the charges that have been brought against them.

The website Free Pussy Riot argues the arrest of the women for political protest is in violation of the Universal Declaration of Human Rights (UDHR), Committee on the Elimination of Discrimination Against Women(CEDAW) and the Russian Constitution, with Amnesty International calling the women prisoners of conscience.

In Brooklyn two benefit concerts  have been organized including a show earlier this week coordinated by the feminist organization Permanent Wave attended by Bikini Kill and Le Tigre’s Kathleen Hanna, who spoken out for the group on her blog and created a video encouraging response to their jailing. Tomorrow another benefit concert will be held in Brooklyn at the Knitting Factory, and other shows and events in support of the group  are popping up around the globe.

Political protest and punk are powerful partners as was recently articulated in an NYT Op-Ed “Real Punk Belongs to Fighters”  pointing to political protest punk by groups such as the UK band the Sex Pistols, the Iranian band The Yellow Dogs and the Burmese band Rebel Riot. With their increasingly bold actions Pussy Riot has in no small way brought an international spotlight to  ongoing human rights abuses by the Kremlin with devastating ramifications for women, the gay rights movement and civil freedoms in Russia.