Representing the queer community is hard. It’s really, really hard. Speaking as a magazine that kills itself trying to make sure it’s a space everyone feels comfortable in and still f*cks up pretty much all the time, sometimes really representing all of us feels impossible. Maybe this is why we were so immediately impressed with Molly Landreth and Amelia Tovey of Embodiment: A Portrait of Queer Life in America. In an amazing story of personal-project-turned-massive-transnational-multimedia-epic, Molly and Amelia are gathering stories, photographs, and entire lives from all kinds of queers all over the country. Sound incredible? Yeah, we thought so too. As Molly and Amelia put it,

Embodiment: A Portrait of Queer Life in America is the first ever comprehensive web-based documentary and archive to explore the LGBTTQ community in America as a whole. This project seeks to introduce individuals from urban and rural areas and highlight a national experience in its many diverse, overlapping and even conflicting parts.  As we engage with the connecting themes of love, religion, race, class, family, geography and gender identity, we seek to actively change the way marginalized communities are perceived, and offer individuals a chance to speak for themselves. We believe this project has the potential to ignite real social and individual change on a global level.

You can check out some of the photos associated with Embodiment at their online gallery, or watch their video to get a preview of what Molly and Amelia have in store:

In a world where representations of queer diversity (and lesbian diversity in particular) are often limited, we’re glad that someone out there is giving due regard to race, class, ethnicity, religion, gender identity, and the rest. We had so many questions, though! Since, as we said, we frequently fall short of our own ideal for making all voices heard, we were eager to find out how others were working to accomplish the same thing. Luckily, Molly and Amelia were more than willing to answer. We were also lucky enough to get to speak to some of the project participants featured in Embodiment; you can check out their thoughts and portraits at the end!

Embodiment started as a solo photography project in 2005 – how did it evolve into the expansive national record it’s becoming now? 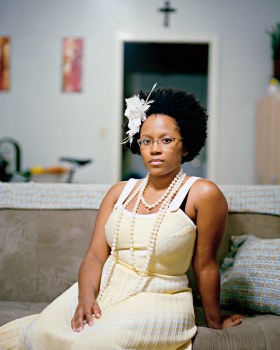 The concept for Embodiment started off so simply: explore and represent queer identity & make beautiful portraits of people who are dear to me.   However, the whole nature of being queer is about being open to a really wide variety of experiences and identities, so the resulting community is HUGE!  Add to that the fact that I wanted to explore queer communities that weren’t only in major metropolitan cities and you get a very expansive, ever-growing, ever-changing body of work.  It also really changed as I realized the need to highlight the subjects’ voices within this work – something that is difficult to do through photography alone.

Embodiment evolved organically. When Molly asked me to come on board I was really interested in the idea of American-ness and what that means right now. The idea of a collective national portrait was there from the beginning, but I think the idea of an all-encompassing queer map of America really took on a new tone by bringing in an outsider’s perspective (I’m Australian) and hitting the road together. It connected us to a broader audience, which made us realize how hungry people are for this kind of content – that’s a really motivating force.

What challenges do you experience trying to record the real diversity of queer experience?

We are constantly surprised at just how vast this community really is and what a wide range of complex and surprising life experiences exist within it.  We just try to keep pushing outselves to find new stories, faces, bodies and voices and explore the intersections of race, class, gender, sexuality, ability and geography within that.  It’s a tall order but each new participant we meet gives us the momentum and confidence we need to reach out to the next person.

Sometimes the pain of being so invisible in mainstream media and straight culture means that people are particularly sensitive about being included in the representation of queer bodies and stories – how do you work to make sure that everyone’s voice is heard?

I think an important way we tackle this challenge is by giving everyone a chance to define their own lives for themselves; they define queer, define how they identify, define what it means to be them. We make sure people’s voices are heard by making interviews organic and conversational. We’re interested in the questions that concern people as much as the answers. We’re accessible and honest and we really care about our subjects – there’s a mutual respect and warmth that informs our interviews and i think that leads to an empowered speaking position for participants. 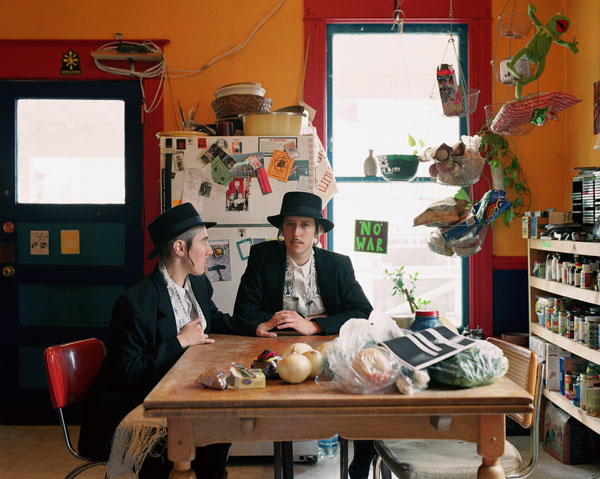 Who do you hope this project reaches?

We’ve always said that this project is largely by and for the community that it seeks to represent, but I think it will have a huge impact on non-queer individuals who would never have access to queer lives otherwise. We hope this project reaches people in remote areas of America and the world – that’s the point of having it all online. We frequently get feedback from queer youth who express a real connection with the work as a unique experience that comes close to articulating how they feel about their bodies and their lives – I think this project will make a big difference for them.

It’s hard but it’s also really rewarding; it means we have different perspectives and we bring different communities and audiences with us. It also puts a degree of pressure and importance on what we’re doing because time and resources are precious and working like that can be exciting.

Sometimes it feels like a bit of a relay race, which is fun. I’ll work on something all day, email it to Amelia before I go to bed and then she’ll work all day and pass it back to me, and so on.  It’s pretty awesome to say that sometimes we literally work round the clock!  Of course, I would trade that all in to be able to sit at a desk across from Amelia and just work face to face all day.  It’s amazing how much more productive we are when we take my shaky internet connection out of the equation!

What point are you at in the project right now, and what’s next? How can we support you?

Right now, our supporters are making Embodiment possible through really generous donations big and small. We’ve raised over $10k in public donations and that’s enabling us to complete post-production on the films and build the website so we can launch in 2011. Supporters can leave us comments, make donations and get prizes like signed prints and mixtapes – we appreciate every single dollar so much!!  You can find out more by going to kickstarter and watching our promo video.  If we raise another $10k, we’ll be able to go back on the road and film a queer prom, a gay rodeo, and many many more queer adventures to share with you all next year!

Now, here’s some personal stories from some of the people who’ve become a part of Embodiment… 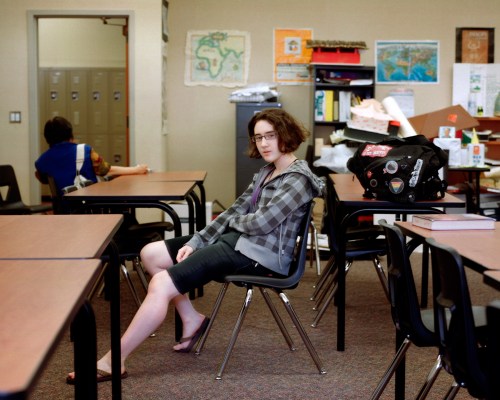 I’ve been a part of Embodiment since Fall 2009. I first met Molly Landreth at Lambert House, a drop-in/community center space for queer youth in Seattle. She interviewed me that night, and asked if I’d be willing to do another shoot, which led to a variety of outfits and excursions, including a certain pair of pink, plaid, 5-inch heels. When Molly started working with Amelia Tovey, I was the first subject of the collaboration, dancing ballet, barefoot, on the football field outside my large public high school, with the boy’s soccer team practicing behind us. Being a part of Embodiment, portrayed as a valid and important part of national queer culture and community, makes me feel less isolated.  Even within queer community, genders and identities can be narrowing and limiting, but with Embodiment, each person is seen as an individual, and each expression is inspiring. 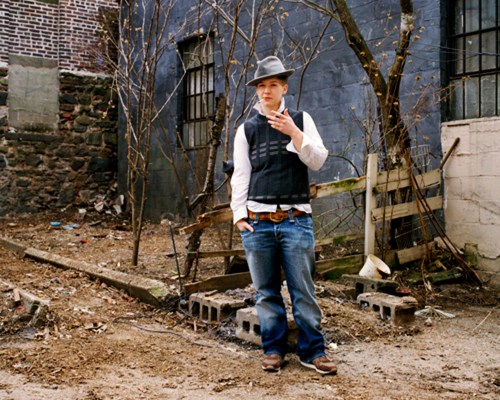 While visiting Brooklyn in spring 2005, I was sitting on my friend Jeremy’s couch, when in walked his roommate Molly Landreth. Within 5 minutes of meeting me she turned and said, “Can I take some photos of you?” We did a really fun shoot in the backyard – me with a hat, smoking, climbing a tree. I never knew that Molly’s project would grow into such an amazing world of its own, but I’m glad it did. Being a queer musician/artist myself, I am thrilled with the powerful impact Embodiment could have regarding people’s perception of the queer community. Not only does it illuminate the wide diversity of sexual orientations and countless permutations of individualized gender identity, it goes BEYOND that by unabashedly capturing the most radical and extreme representations of what queer America is. Being a part of this project is an honor and I think it will be amazing for queers to see themselves reflected positively, and for others to broaden their stereotypical perception of the queer community.

(Julia’s a self-professed performer of “dykie music,” and you can check out her myspace here or her first single here!) 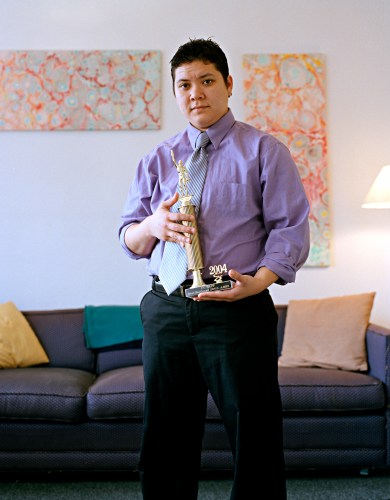 When Molly first asked to me to be a part of Embodiment I was hesitant.  Not because I doubted her abilities but because I am a little camera-shy.  I’d known Molly for quite some time and always felt comfortable with her so I thought I would give it a shot. When she arrived at my door I didn’t know what to expect but it turned out to be an amazing experience.  She had no agenda but rather encouraged me to find ways to represent myself, my identity and what being queer meant to me.  Throughout the process I wound up getting dressed up and showing off my Best Boyfriend trophy.  Molly’s concept of queerness was fluid and I was proud to represent a minority group in her collection – trans people of color.  I felt supported by Molly from the beginning and am now very proud to be a part of this project. Trans people are often marginalized and I plan on only partially transitioning, which makes me part of an even smaller group.  Embodiment is a picture of the entire spectrum of queerness, including queerness in gender.  I couldn’t be more proud of Molly’s ambition, creativity, and inclusiveness of the entire community.

+
Think Molly and Amelia’s project sounds amazing and totally inspiring? Pretty much! You can donate to support their work at kickstarter, and keep up with their progress by following them on twitter. Do it, queers!