Autostraddle is back at Sundance. Drew Burnett Gregory and Shelli Nicole are coming to you daily for the next week with LGBTQ+ movie reviews from one of the most prestigious film festivals in the world. Follow Drew and Shelli on Twitter for more!

Folks throw “queer” on pretty much everything these days, especially films. Because of that, I’m always wary when I go into one that has “LGBTQ+” or “queer” attached to it because eight times out of ten I’m going to be let down. It’s rather sad that instead of being excited about movies that are being marketed to me, I have to go in wondering if I’m about to be tricked.

Eileen (Thomasin McKenzie, Last Night in Soho) works in a boy’s prison in 1960s Massachusetts. She’s a gopher of sorts, she gets files, does visitor pat downs, that sort of thing. She’s also wildly horny, unsure of herself, and lives at home with her drunk, mean, and depressed father. So when Rebecca (Anne Hathaway, I’m not naming a movie you know who she is) walks into her life as the new prison psychologist and looks her way, she’s enamored with her. She’s confident, beautiful, kind, and pays attention to her — she’s giving her what she craves AND is everything she wants to be. 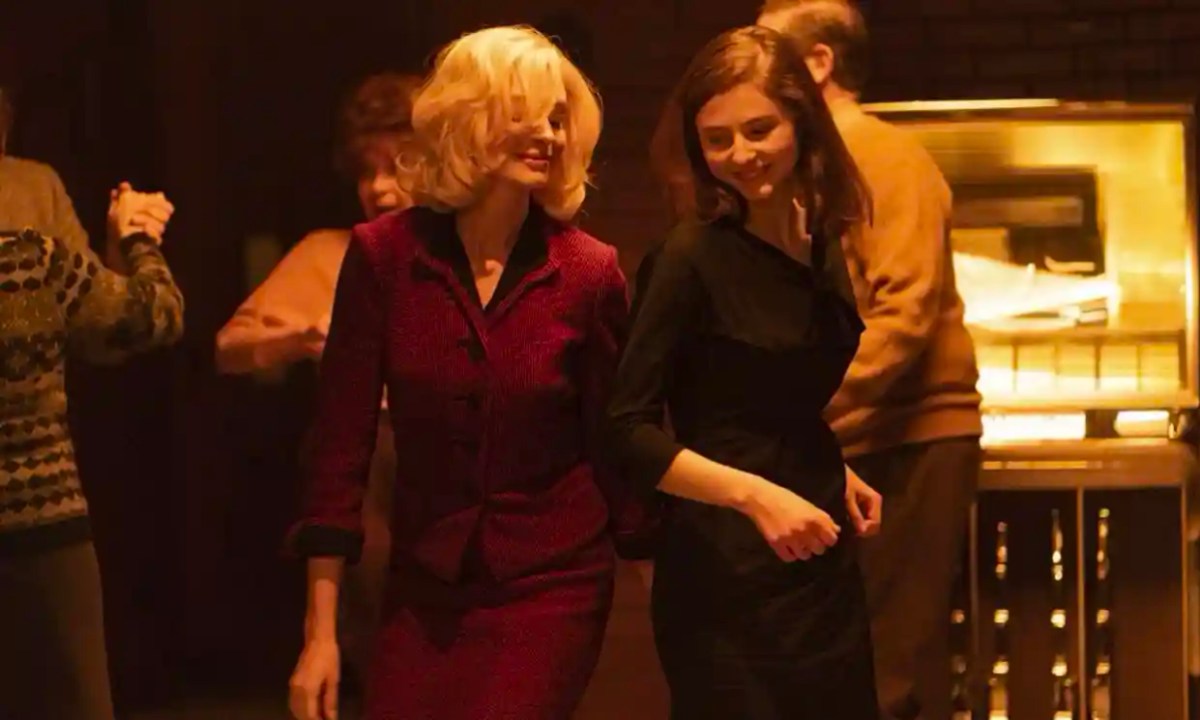 They later hang out ONCE at a bar, where Rebecca opens up over drinks and they share a vibe and a dance, but Eileen is so starved for affection that she mistakes it for something bigger than it is. She is having the typical “Do I wanna be her or fuck her” dyke conundrum, but because the film isn’t invested in being truly queer, it doesn’t properly explore it and instead, it turns into a story of another “crazy” girl.

This movie didn’t need this faux femme energy to be good, but since we are here — A THIGH TOUCH AND A SMILE DOES NOT MAKE A FILM QUEER. There are four moments that could be labeled as queer, all of them can quickly be explained as not, and all but one take place in the same scene.

This movie is giving All The Things She Said energy and I’m tired. Am I saying that I need to see dykes eat box on top of a bar in order to make a film actually queer? No. But I am saying that you should not be allowed to label a film dykey just ‘cos two pretty girls exchange a glance 22 minutes in. The film is also soaked in trauma, not just in Eileen’s story, but in everyone around her. Like, if it were actually gay, would I be happy to watch another movie where someone discovers their queerness from a traumatic angle? No. Molestation, suicide, loneliness, and depression all make an appearance in its 97-minute runtime.

Eileen is a good movie (with a fun twist that it is a bit too dependent on) but it’s not a queer one. It’s a movie about a young woman who is unhappy, unwell, and unfulfilled and then develops an obsession. The person she is obsessed with just so happens to be a beautiful woman, but it could have been anyone. I’m no longer giving films — and directors who make films like this — the benefit of the doubt because they are aware of what they’re doing. The more we continue to excuse it, the longer it will take for us to get films on the screen that are full, dope, and actually queer.

Shelli has written 241 articles for us.