It’ll be an amazing day when gay people are granted all the rights that straight people have. It’s been a long, hard battle, but we’re making progress. Thanks to Obama, it seems like we have someone to back us for marriage equality!

BeautifulPeople launched a “humorous campaign” using actors to make light of outdated American politicians. Sarah Palin and Michele Bachmann embrace each other while Obama officiates! Such a strong political statement! Apparently California still had a problem with it, but you can see the uncensored version in NYC. Wouldn’t the USA be great if everyone straight or queer could marry the person of their dreams? BeautifulPeople thinks so!

But only if they’re pretty.

Their original site may have slipped under your radar because you aren’t part of the straight BeautifulPeople club, which only allows people of a sufficient level of attractiveness to attempt to date each other via the internet. With the launch of BeautifulWomenOnly, the club has opened their sidedoor for you queers! Now you can join the elite — if you get past the bouncers.

Simply register and upload a photo of yourself. Forty-eight hours later, you’ll learn whether you’re worthy of affection! Unlike its straight counterpart that had to prevent catty ladies from down voting their competitors, BeautifulWomenOnly encourages ladies to rank one another as fuckable or not. A bevy of beautiful bisexuals and lovely lesbians judge your attractiveness based off a single photo and a few scant lines of text. 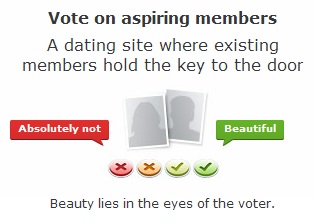 Does that seem weird? Of course not, this is a democratic system! It’s not like you’re being judged by a random algorithm or an individual across a bar! Instead several people (that have already been ranked as hot) decide whether you fit into each of their arbitrary definitions of attractive. That sounds fair! And rewarding!

If you are deemed worthy enough, you will reap the fruits of your genetics while furthering the cause of attractive gays marrying attractive gays! BeautifulPeople will donate 15% ($4-6) of your monthly fees to organizations fighting for marriage equality. Nothing is more attractive than armchair activism! Plus, it’ll free up your time for the rewards you so rightfully earned. Date other BeautifulWomen! Have a modeling contract fall in your lap! Go to exclusive BeautifulWomen events! Get guest-listed for the hottest clubs frequented by BeautifulPeople! Judge other applicants to protect your fellow members and keep out the non-BeautifulPeople! Or simply talk to other BeautifulWomen in a “walled community [that] assures privacy and an exclusive virtual world for the aesthetically blessed.”

BeautifulPeople isn’t defining beauty, it’s just giving “an accurate representation of what society’s ideal of beauty is as decided by the members.” We all know that there is only one type of beautiful woman and every lady is attracted to the same thing; and that in the queer community, heteronormative standards of female attractiveness are very meaningful. So if you didn’t win the Beautiful title, clearly you’re doing something wrong. You’ll be forced to hide away on other dating sites where you’ll have to rub cursors with other non-BeautifulPeople. Gross.