Last time we saw Dexter he was careening down a highway in a minivan as we feared for his life. But hey, that was the first episode, he’s fine now! He emerges from the whole skedaddle with just some memory loss, a concussion, and just-got-out-of-bed-hair. The real problem is that this accident happened in the middle of him killing Benny Gomez!

So, the episode follows Dexter trying to figure out where he “left Benny,” just like you’d look for a wallet: retrace your steps, visualize, and talk yourself through last night. Except that it’s not a wallet, it’s a dead human being, so he’s a little frazzled. 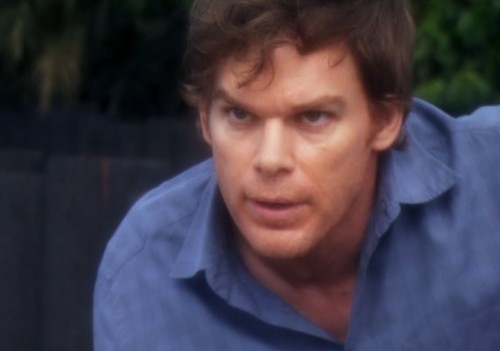 Excuse the interlude but I just want to talk about John Lithgow for a moment. We first saw Dear John naked in a bathtub murdering a young woman. Nice introduction.

Agent Lundy (that FBI serial killer hunter) has informed us that Dear John is the “Trinity Killer,” which is a much cooler and slightly less graphic nickname than last season’s “The Skinner.” So he has that going for him. And this episode we find our friend walking around a boardwalk, stalking a mother & two children with a very creepy look on his face.

They picked a great actor, of course, but my strongest image of Lithgow will always be lord Farquad in Shrek, so I’m find his transformation into a cold blooded killer slightly terrifying. I don’t want to say that he “looks like a serial killer” but he looks like a serial killer. I venture to say that he’ll be the best adversary Dexter has had yet. 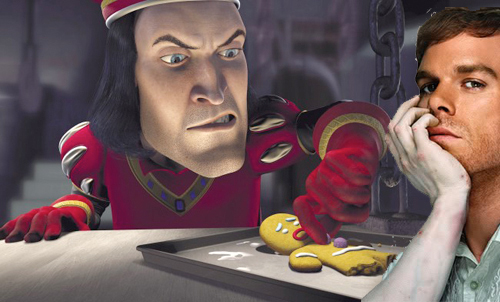 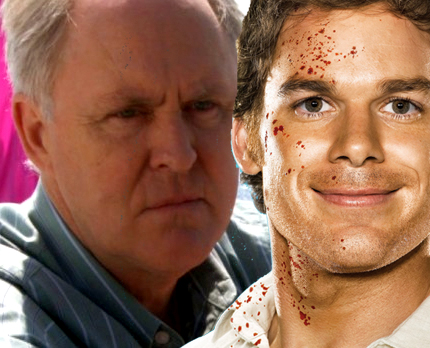 Ok thanks. So, Dexter’s concussion keeps him from remembering where exactly he left Benny’s foot or even his hand. He’s jumping in dumpsters Freegan-style, scouring the boxing ring where he initially did Benny in. But he is “haunted,” so to speak, by the image of his dead father giving him clues while also telling him that he cannot be a serial killer AND a suburban man, which in case you missed it; is the main MOTIF of this season.

Eventually, Dexter drinks five Red Bulls (hello product placement!), it gives him wings, he finds Benny in a punching bag, and he can finally chill out. Here Dexter thinks to himself, “I am so fucking clever.” 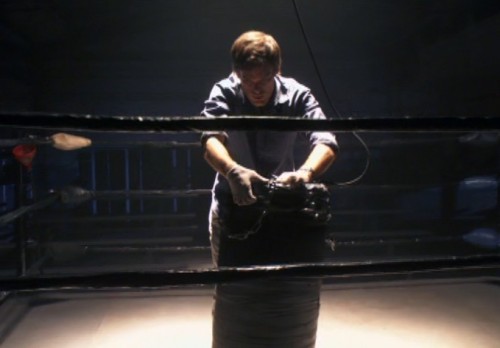 … until baby Dexter starts crying and wakes him up.

Moral of the story: if you’re a serial killer, kids are going to cramp your style.

2. Quinn (an officer in the precinct) is a “dirty cop” and steals money from a safe in a crime scene, which Dexter witnesses. But what does he care, again he kills people.

3. Laguerta and Angel (her sergeant) are having a hard time managing the “office romance” and unsuccessfully try to quit each other.

4. There is a series of murders called The Tourist Murders the precinct is investigating. Basically someone is shot and then robbed, nobody who is really interesting (doesn’t this show just jade you about killing, I mean, is John Lithgow involved, can a Tourist hold water against a Skinner or a Trinity, no, so chill).

Okay so I’m a nerd and I’m leading the Autostraddle Dexter study group. Let’s answer some questions. I noticed you guys brought some up in the comments last time so feel free to add!

Is Dexter in trouble with Lundy being back in the picture?

Are Rita and his family getting in the way?

What is “the trinity killers” deal?

What would you do for a Klondike bar? Seriously.

intern has written 6 articles for us.