What’s the happiest moment in your life? For adults that have experienced many happy moments in our one wild and precious life, that’s a tough question. But for a teenager like Paige, Rowan Blanchard’s character in the new Hulu film Crush, that question is tough because, well, nothing huge has happened to her yet!

Paige is pretty happy, to be clear. She has two hilarious (and very sexually active) best friends running against each other for student body president, literal Megan Mullally as an almost-overly supportive  — no seriously, like, pushing dental dams level supportive — mother, and a talent for art that she’s hoping will get her into a summer program at CalArts. The only thing standing in her way is the application, which asks her to draw the happiest moment of her life.

Enter Gabby, the girl Paige has had a crush on since childhood, the most popular girl in school, the girl who makes everything move in slow motion when she enters Paige’s line of sight. When Gabby asks Paige if she’s coming out for track tryouts that afternoon, Paige can’t help but trip over her own tongue to (ill-advisedly) say yes.

Rowan Blanchard plays the awkwardness of talking to your crush to painful perfection, but not to the point of cliché. She’s just as believable when spouting off strange animal fun facts to fill space as when she’s joking about whether she looks like a top with her two best friends or giving attitude to her high school principal and track coach who believe her to be the culprit behind the punny graffiti that keeps popping up around the school.

But she’s at her best when she’s talking to AJ, Gabby’s understated twin sister and co-captain of the track team play by Auli’i Cravalho. When Paige has to uncover King Pun (the aforementioned punny graffiti artist) to avoid suspension and keep her record squeaky clean for CalArts, she and AJ team up — first at a raging high school party where their easy rapport made me literally giggle, then the next morning hungover at track training. Cravalho sparkles, and if I have my way, we’ll see her bring back the rom-com genre immediately. Despite rumors that the two didn’t get along during filming, their chemistry crackles on screen. (It’s always the ones that don’t like each other, isn’t it?)

If this plot makes you feel about 100 years old, well, same. The dialogue is so specifically Gen Z that for a moment I thought I might not vibe with this movie. But I’ll admit when I’m wrong, and I was wrong. This movie grew on me fast. Even references that hurt my feelings (Wyclef Jean and a joke about Taylor Swift being old) made me laugh! The film also has a bunch of homages to high school comedies of yore (I clocked tastes of She’s All That, Mean Girls, and 10 Things I Hate About You, while But I’m a Cheerleader is an obvious progenitor), a few cute Easter eggs for anyone older who just loves the genre. 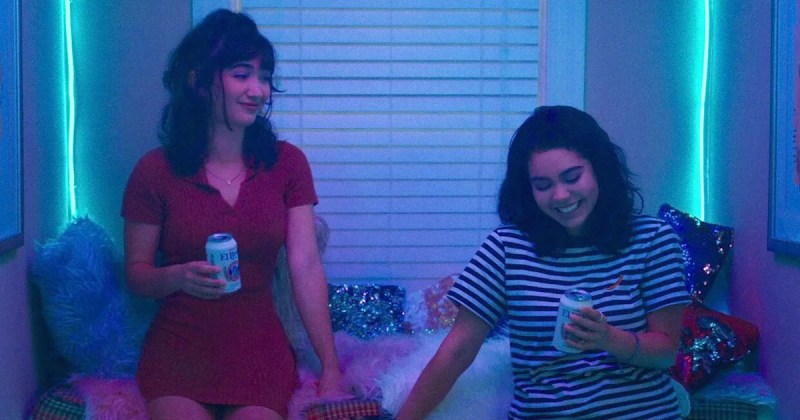 The King Pun plot fades into the background for most of the film (and it’s pretty clear who the culprit is from the outset, in this reviewer’s humble opinion), but allows for a fun “good cop, bad cop” bit and a “stake out” that also allow Paige to get closer to both Gabby and AJ. By the time the three of them are at a party at an away track meet, even Paige’s best friends are invested enough in her love life that they’re able to stop sucking each other’s faces for a few minutes.

The overnight trip, just like I remember from high school, is rife with potential for drama and romance. It’s also by far the standout portion of the movie. Comparatively, the inevitable post-party fallout never feels earth-shattering or high stakes. But this is, after all, a movie about high schoolers, and to the film’s credit, I did believe they felt that the stakes were high. And yes, because Crush hits all the familiar beats, there is a grand romantic gesture that wraps everything up tidily and nicely: a sweet payoff to King Pun, the Cal Arts application, and even a growing flirtation between Megan Mullally (I’m sorry, I refuse to call her anything but Megan Mullally!) and Paige’s track coach. It’s formulaic, but if the formula ain’t broke, must we fix it? Isn’t enough for a movie to just be sweet and delightful?

What does differentiate Crush, ultimately, is its queerness. I spoke with both leads of the film who cited how lovely it is that the movie isn’t about being gay. But for me, it’s such a delight that it is.

True, it’s not a coming out story, but there are jokes about short fingernails and girl in red, and all the music is by queer artists and there are heartfelt conversations about coming out. Maybe it is part of an older “generation” way of thinking to call this a Gay Rom Com when none of the others are called Straight Rom Coms, but I feel pretty excited for any young queer person who might choose to watch this specifically because it’s gay, and find a whole fleshed out (if slightly unrealistic or idyllic) world.

I think it’d be very difficult not to be charmed by Crush. From the extremely winsome leads to the easy story beats and quick humor, it’s darn cute and wholly queer. By about 20 minutes in, I had adapted to all the Gen Z speak and was fully along for the ride.

Crush premieres on Hulu this Friday.

Analyssa has written 31 articles for us.