The latest series of Catwoman’s solo title has been widely praised and celebrated for its originality, slow-burning and tantalizing crime story, great art and the new direction that it’s taking the character. In a lot of ways, it’s reminiscent of the classic Gotham Central series, but focusing on the other side of the law. With issue #39, it steps into a new frontier by showing that Selina Kyle, one of Batman’s, and all of Comicdom’s greatest villains and anti-heroes, is bisexual, and having her kiss another woman. 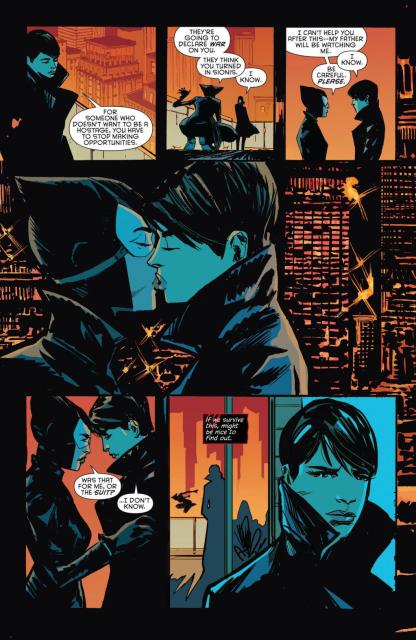 That other woman is Eiko Hasigawa, who is the current Catwoman and the daughter of a Gotham City Yakuza boss. The crime family that Selina has found herself at the head of and the Hasigawa family are about to be at war, and seeing as Eiko is the liason between the two, this could create some tension between her and Selina. Good thing Selina’s used to tension in her relationships.

This current storyline, written by Genevieve Valentine and illustrated by Garry Brown, started with issue #35 and has Selina Kyle giving up the leather outfit of Catwoman for the tailored suits of a Gotham Crime Lord (and dang, does she look good in a suit). In her absence, a new Catwoman has risen up: Eiko Hasigawa, who keeps on getting tangled up in Selina’s life. She’s perhaps more of a do-gooder than Selina was in the role, and even confronts the former Catwoman because of some of the crime family moves she’s making. Selina tells her that things are more complicated that she thinks and that she’s doing what she’s doing because she loves Gotham and is trying to make it a better city. 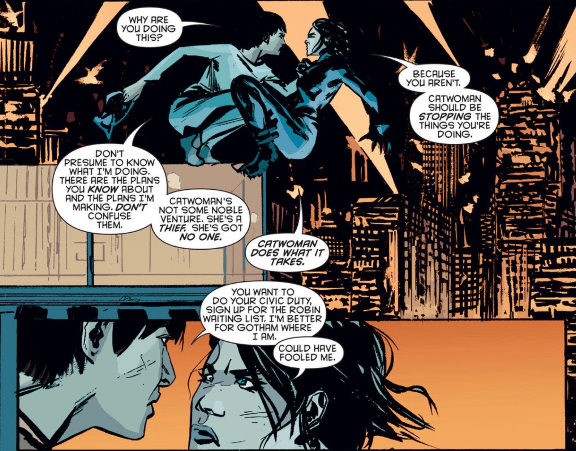 Selina and Eiko in an early encounter, which Valentine scripted as having close-talking that should be comparable to Xena. Catwoman #36 art by Garry Brown

As many of you probably know, Selina Kyle has long been a favorite comic book character of many queer ladies. All you have to do is watch Michelle Pfeiffer play her in Batman Returns to completely understand why. I mean, come on, with the “bad girl” streak, the leather outfit, the whip and the take-charge attitude how can you not have a crush on her? Now, with Catwoman #39, she becomes the highest profile canonically queer comic book character of all-time. Catwoman is one of DC’s most iconic characters. She’s not just a part of comic book culture, she’s a part of mainstream American culture. She’s been around since Batman #1 in 1940 and has starred in her own comic, in multiple TV shows and a couple of movies. She’s been played by Julie Newmar, Eartha Kitt, the previously mentioned Michelle Pfeiffer, Halle Berry and Anne Hathaway. Catwoman is known by millions of Americans and millions more around the world, and now she’s officially and openly bisexual.

On her blog, Valentine confirmed that yes, Selina Kyle is bisexual and that no, this kiss “isn’t a throwaway” and that she’s working on a story for Selena and Eiko’s relationship “that would be woven into the next arc.” It’s wonderful that Valentine recognizes how important this moment is for comics and for culture, and it’s wonderful that she’s taking so much care to make this story as good as it can be. Also, it’s wonderful that she, unlike so many people that we see in pop culture, actually understands what bisexuality is, as shown by her saying “Selina’s longstanding connection to Batman has not been forgotten; that is not how bisexuality (or humanity) works.” 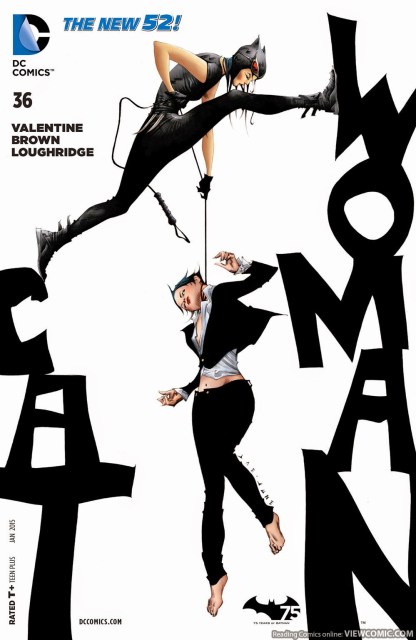 Eiko and Selina on the cover of Catwoman #36 with art by Jae Lee.

Selina Kyle’s being confirmed as canonically bisexual is definitely a huge thing, but we also can’t ignore the importance of Eiko. Since she’s the current Catwoman, that means that Catwoman is a queer woman of color. That’s big, big news. Of course, we don’t know how long she’ll be in the role of Catwoman, but we do know that Valentine isn’t done with her yet.

Both Selina Kyle being depicted as bisexual and the introduction of a queer woman of color as Catwoman are positive signs that the trend of introducing more diverse characters and women into comics is going to stick around. In the last few years DC, Marvel and a bunch of independent comics have been including more and more women, more and more people of color and more and more LGBTQ characters in their comics, and have been giving many of them their own comics to star in. Selina Kyle being shown as bisexual is perhaps the most high profile example of this so far. As long as DC keeps making decisions like this, the future is looking bright for women and queer people who want to see themselves represented in the pages of their favorite comics. We all want to have heroes who are like us, and now with Catwoman, queer women across the world have a popular, iconic and super version of that.