It is September 20th on the year of our lord and Carol is officially available on Netflix. You now have the option to stream this Patricia Highsmith inspired masterpiece for hours, days, months, or years on end, depending on how early Netflix decides to engage in its cruel practice of removing cherished media from their collection for what seems like no reason at all besides wanting to remind people at once of their dominance and the impermanence of all things in life.

A recent run of the numbers revealed that Carol content makes up for more than 5% of my writing here at Autostraddle, so it made sense that I would approach this day in the same normal way I’ve been doing since Carol‘s theatrical release – by watching it over and over for hours and sharing my experience on the internet where it will exist forever. CAROL ALL DAY AND ALL NIGHT BABY!!!

What can you expect from this liveblog? Well, I bet you can expect some commentary. I have some Carol trivia I bet I’ll drop in here and there, both personal to me and about the movie/book itself. (For example, did you know Carol Aird is based off of a real woman Patricia Highsmith met while working retail?) Screenshots? So much more, I bet!

Stay tuned, I know I will.

My kittens, the credits are rolling, and this is where I stop. The last time I saw Carol Aird pull at her nightgown – a gesture that will usually inspire in me a Supermarket Sweep kind of savagery – I was unmoved. This cannot do. It will not do. I love you all, but the time has come for me to preserve the purest part of me. Goodnight and good luck.

I’ll say it: was the Carrie Brownstein scene necessary?

“I should have said, ‘Therese, wait.'” In addition to everyone publicly flirting, I’m going to advocate this as well. 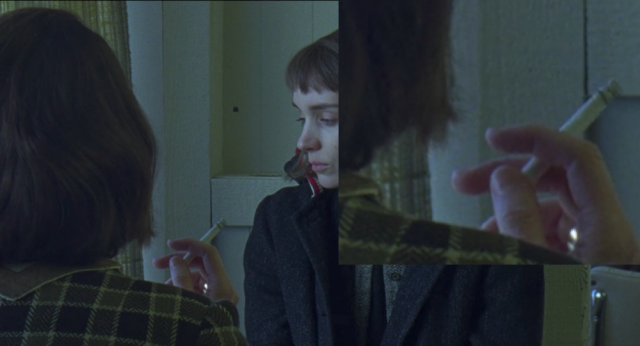 ARE WE CRACKING THIS GAY THUMB THING WIDE OPEN???? That is also my thumb on Sarah Paulson. 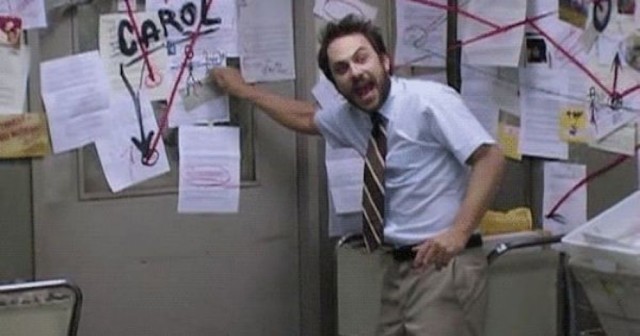 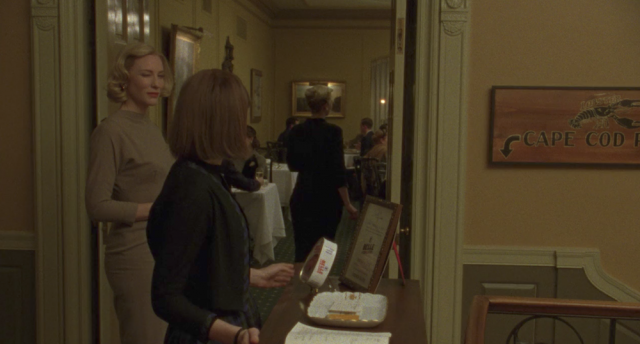 Hi there, how have I missed this wink in every viewing of this movie?

For the sake of my friend who texted and said she was feeling residual anxiety because I’m going on hour 10 of this, I’m going to take a pit stop. For my friend. FROM POSTING. Carol will 100% be on in the room. Rest assured. I wouldn’t lie to you.

“Ah-ha! Found a continuity error.” – The worst kind of movie watcher and me right now. When Jack calls for Therese from the bar, it’s right after Carol has said “I love you” with the intensity of eleventy suns. But from Jack’s perspective in that moment, Carol is smirking. Wow, Todd Haynes really blew that one. 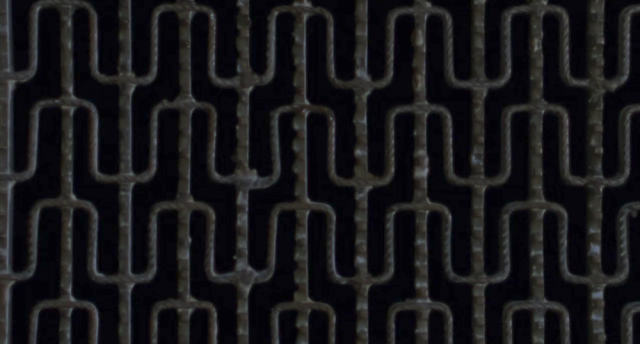 Can I get this as a tattoo but just over my entire body. 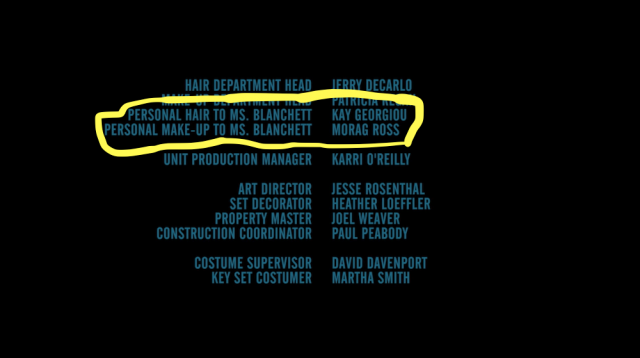 “Where do you see yourself in five years?” Also, and I know because I’ve seen it in action, Connie Britton has three more personal hair people than Cate Blanchett.

I’m going to try to incorporate “swank” at the end of sentences as a way to be like “noice” and see if it catches on.

I get more and more furious every time I hear that human kazoo say to Therese about her failed relationship with Carol (an entirely different person), “Is this because I tried to kiss you that day?” What? Did I enter into a relationship with a woman who I still want to be with but it’s just circumstantially not going to work out right now because of you? Where am I? Where are you, my brother in mankind? 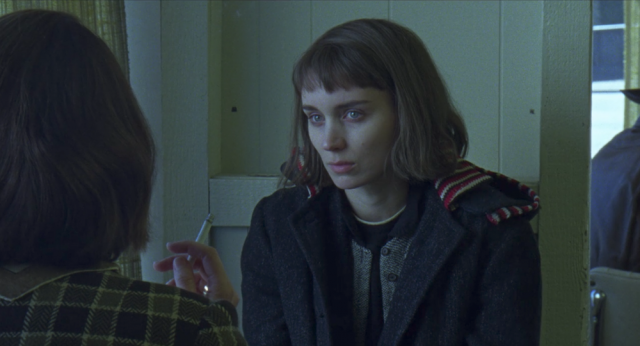 IMPORTANT UPDATE. Unless Rooney Mara has a hand double, Rooney Mara and I have the same thumb, which is a thumb that has been called gay (???) by an ex. So.

Well we’re up to two people who have insinuated via text that I have possibly started to adopt Carol as a persona. Am I putting out an I’m For Sure Not Snacking On Potpourri, I’m Simply Carol Now vibe?

What, if anything, do you think Kyle Chandler and Cate Blanchett talked about in their downtime? Somehow I can’t imagine them interacting, because I think it’s that thing where two aggressively attractive and intriguing people meet and sort of repel each other. You’re going in your head right now, “Um, no I know _____ and ______?” and it’s like, no, no, one of them isn’t interesting.

Where I am mentally right now.

What do we all think of the pause Therese breathes life into right before she floats, “…and wets herself” when talking to Carol for the first time? I think, re: that text from earlier, this was intentional. 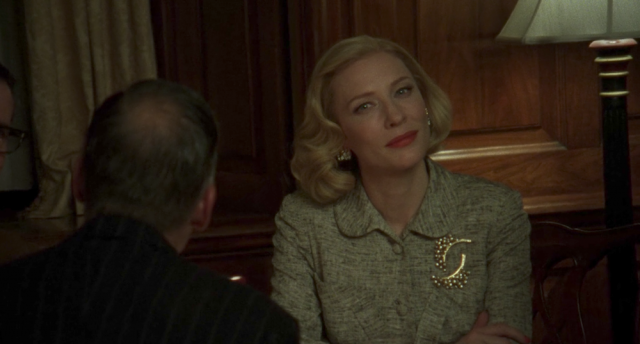 This is Carol looking at me and only me in a knowing way like, “Don’t do it, girl” and I’m already pressing play again.

While Harge and Carol work out the whole Rindy situation, let’s all look at this picture that I tried to use in an article once but couldn’t because we didn’t have permission but then I put it on my Instagram and hey there’s nothing wrong posting something from your personal account. 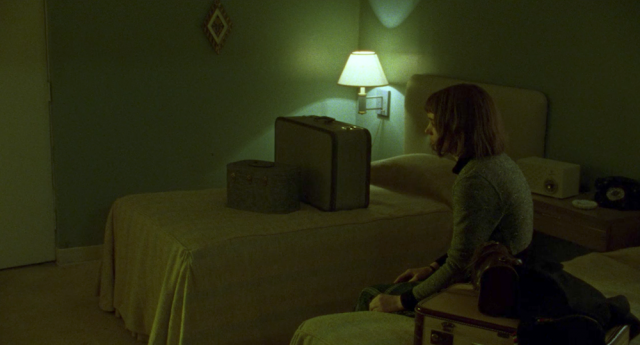 Everyone after the eclipse.

Ahaha what if I just left the post there.

This movie takes on a whole new feel when you realize that where this story ends in real life is at the doll counter. Patricia sent a postcard to Kathleen’s home immediately after their meeting, but never heard back. Kathleen died a few years later. There was never perfume applied to pressure points and no one took anyone to bed – it was just a story of what ifs.

No matter how good a singer you are, if you are by yourself and you are maybe in your bed, if you sing “City sidewalks, busy sidewalks, dressed in holiday style,” in a month that is not December, when you hear yourself it’ll cause you to Command – on your life and you’ll be in for an emotional treat! 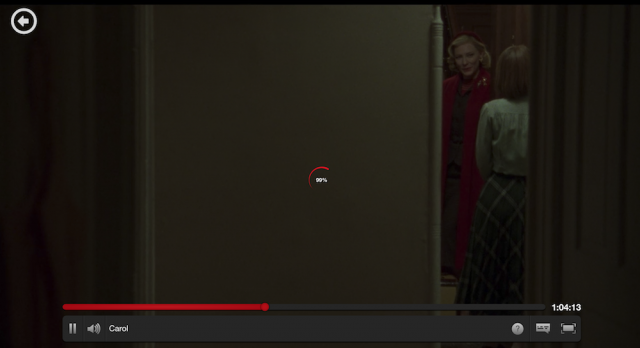 The internet has been trying to save me from myself for the past 30 minutes.

A very accurate text I received: “The way Therese straddles the line between SUCH boldness and being a complete bottom at the same time has me obsessed.” 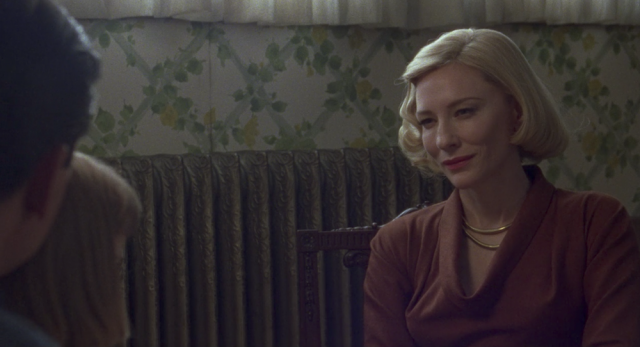 If I don’t have this shirt and necklace pairing this winter I 100% will lose it.

That close up of Carol hitting her gloves on the counter? More from The Talented Miss Highsmith: “Blond, statuesque, with an angled, Saxon profile and ‘intelligent gray eyes,’ Mrs. Senn, slapping a pair of gloves suggestively into the palm of one hand, walked slowly and absently up to the doll counter where a mesmerized Pat stood waiting for her.” 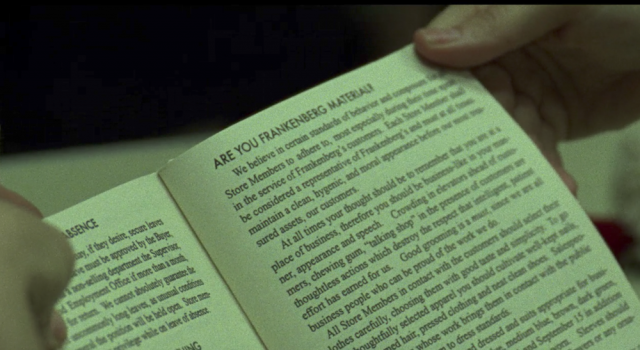 Something else Frankenberg’s believes in? Like six spaces after a period.

Cal’s making Jack another double. I’ve said it before and I’ll say it again: Life: know how to live it!

Does Therese dead-eyed whisper “No, I don’t think so” or “Oh, I don’t think so” when Carol asks her to move in with her? If it’s “oh” then I’m proposing a horror movie trailer cut of Carol complete with that line, the scene where Therese grabs the gun out of Carol’s suitcase, Rindy counting, and the old woman asking if Carol wants more mashed potatoes.

Sorry I got really distracted by the prospect of someone asking me if I wanted to watch Carol and me answering, “No, I don’t.” I want to hold this. When I go out and am wearing a pin of Cate Blanchett as Carol, I want to be just as elated the next time someone goes “Mother!” like someone did last week.

I’ve had a terrible thought. What if this ruins Carol for me? 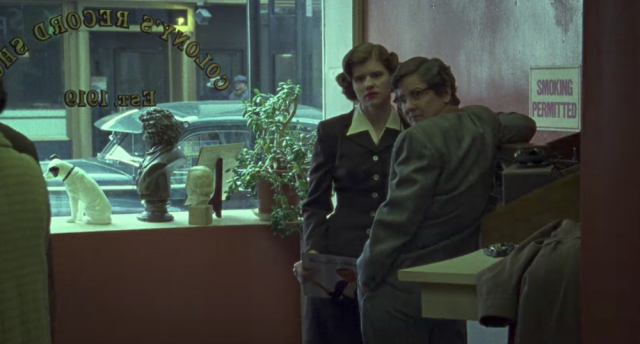 Lol. If “m’lady” could have a stance it would be this stance. Also I never registered Therese’s response to Richard asking her what she got at the record store, which I now know is, “Something for someone.”

“She wished the tunnel might cave in and kill them both, that their bodies might be dragged out together.” 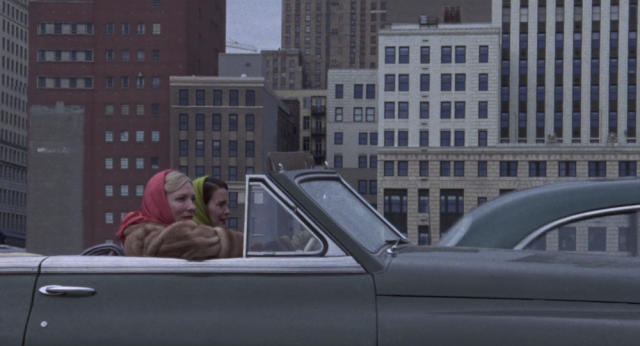 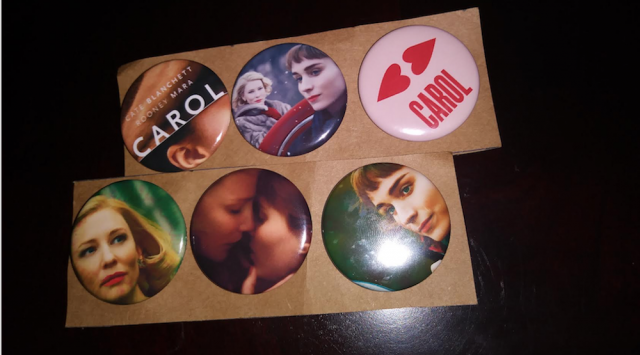 So there was a period of time where random gifts were showing up at the place where I’m staying, which was weird because no one really has the address, and then one day this came. At this point I was convinced someone was for sure clocking my location and sending me very specific-to-me gifts as… warnings? Anyway, I loved these so much I didn’t care. Truly! I was like, I’m going to go out in style. Turns out I gave my friend, whom I know does not want to murder me, the address.

Do you think this was intentional:

It’s my personal opinion that Cate Blanchett was goofing with Rooney Mara in the opening scene where we see them talking but from Jack’s perspective. Like instead of staying in character she was really just moving her mouth or saying “silly” things. Just seems like something Cate would pull am I right.

Netflix tries to usher me out of the building into a newer, less inspiring building. Not today, friend.

The music. You know what music I’m talking about. Here’s something that is wild to me: I know someone who lives with someone who listens to the Carol soundtrack every day but has never seen the film. TRUTH: SOMETIMES IT’S STRANGER THAN FICTION.

Live footage of me at a party last weekend: 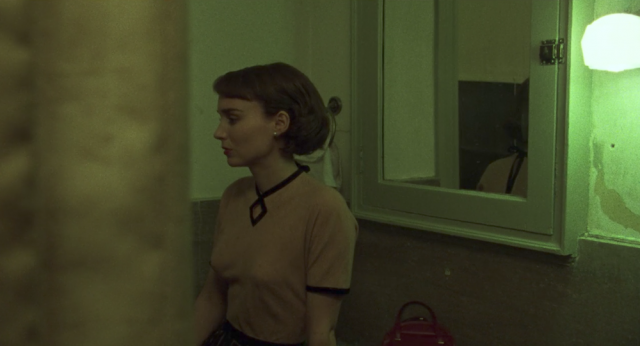 Another horror movie trailer moment when you only hear it and don’t see it is when Carol sits with Harge’s family at dinner and Harge’s frail old mother who sounds like she’s down the hallway speaking through a tin can string phone goes, “Some more mashed potatoes, Carol?”

Whoever the fitness trainer was for Cate Blanchett’s back muscles deserves their own Oscar, much like Carol deserved its own Oscar. Also I know “yearning” was a part of both of Carol’s and Therese’s characters, but their is a particular kind of yearning radiating from Rooney Mara in these scenes, no? Anyone else? Something in her face reminds me of this tweet:

Whoa! There’s new dialogue in the “can you handle a redhead” scene about finding hair in Rindy’s hairbrush. Can see why this didn’t make the cut tbh. [Update: There is not new dialogue.]

YOU MADE ME BUY BOAT TICKETS. Ahaha, I think we can all agree this is the funniest line in this movie. Love you, New Jim. 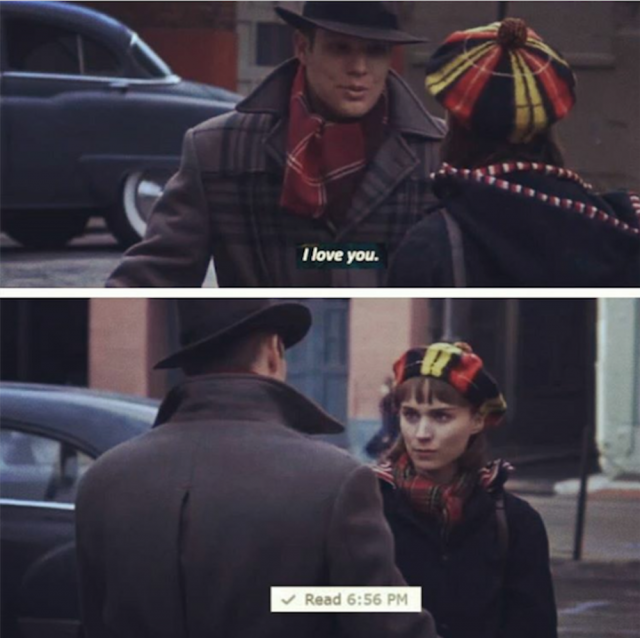 If you only hear and don’t see the scene where we first meet Carol’s daughter Rindy and she’s slowly counting, it sounds like the beginning of a horror movie trailer. Also, did you know Rindy was played by twin girls???

Okay, real life-inspired retail moment. Let me give you this line from The Talented Miss Highsmith about this fated meeting that has had me reeling since I read it: “She wanted to close her hands (tightly, she thought later) around the throat of a ‘blondish and elegant’ married woman from New Jersey who had just bewitched her from across a crowded room.” And now let me show you real life Carol: 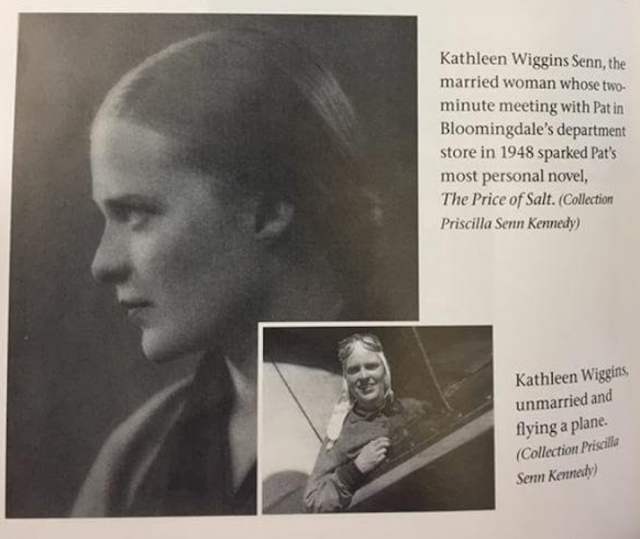 I’d love to know the notes Todd Haynes gave to the actor who gets Therese’s attention by shouting across a crowded restaurant. “Like you’re using a megaphone but the megaphone is your voice.”

Typing Carol into the search area of Netflix and having it drop down with a list of related movies: 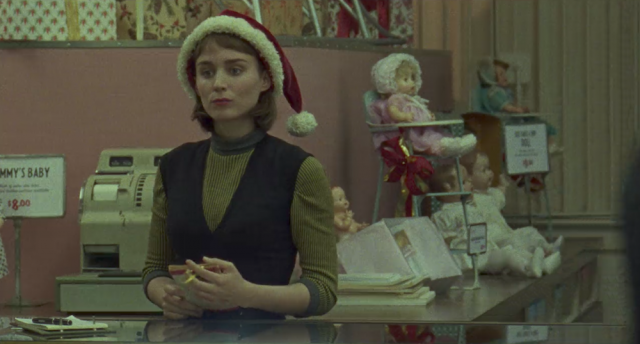 Typing Carol into the search area of Netflix and having it drop down with a play button: 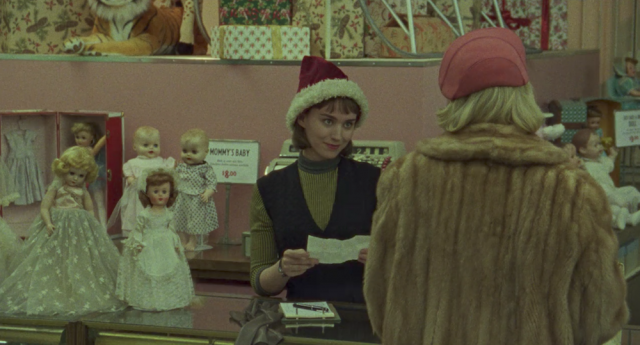