It’s our 51st Autostraddle Anonymous Sex Toy Review! Over the last few years, sex toy companies and stores have asked us to review their toys in exchange for, you know, their toys.

This week, one of our anonymous reviewers tried out the SpareParts Sasha harness, sent by Wet for Her. 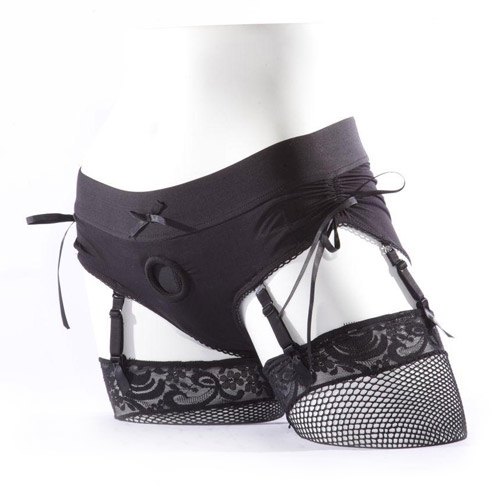 The Sasha harness from Spare Parts is, hands down, my absolute favorite harness to fuck with. It feels great. It looks hot. It can hold up my stockings. And it holds toys in exactly the right place.

The most important things I look for in a harness are fit, control and whether I can come just from fucking someone while wearing it. I found the Sasha fit true to size, and was snug without feeling (or looking) like spanx with a cock attached. The material is thick, but not thick enough to make me think twice before wearing it under tight pants. It’s comfortable enough I’ve worn it as underwear when I’ve run out of clean real underwear. (A Good Vibrations rep has also said the Sasha is good if you’re interested in tucking.)

My main complaint with harnesses I’ve used in the past is the lack of control. I found the RodeOh pretty terrible for anything but gentler sex with a smallish dildo and the Velvet Nest too insubstantial to feel sturdy, though I liked it when I first got it and I’d still recommend it if you like polka dots and smaller toys. I’ve gotten great control with an Aslan leather harness, but it’s 2015 and I do not want to have to deal with a leather harness with buckles and sharp edges and things riding up in places and a distinct lack of machine washability ever again if I can help it. The Sasha does not have buckles and does not ride up and has the best control I’ve ever gotten from a non-traditional harness, regardless of how big the cock an activity partner and I feel like using that day is and regardless of how enthusiastic we get.

The o-ring sits low enough that, with the right cock (1.25 to 2.25 inches in diameter, though note it fits toys with much larger bases), I can come regularly just from moving inside of someone with no vibration needed, though there are two small pockets for bullet vibes. I do not come easily. It feels like magic.

Also, on the subject of enthusiasm, the fabric is moisture wicking, so getting sweaty doesn’t mean feeling gross. It’s also quick dry, machine or hand washable, and if you wring it out in a towel it air dries over night.

The Sasha is similar to the Spare Parts Tomboi harness, which is the essentially the same thing but without the femme details. The Sasha has a cut more similar to booty shorts, but has adjustable ties that can give it a higher cut at the sides. The Tomboi is also $75 to the Sasha’s $150. Having worn the Sasha and been on the appreciating end of the Tomboi, I think you have to be at least moderately committed to a femme harness situation and presentation to justify the Sasha’s price tag given the small differences, but as someone so committed, I am considering getting a second. It’s really neat to be able to use my favorite harness style, i.e., any harness without straps, without having it be incongruous with my gender presentation. There are bows and ribbons and ruching and removable adjustable garter straps and I can change the cut according to my outfit and I can come and have really rough sex without getting bruises from a harness or having a dildo pop out onto the floor. I am sold.